The Source: song of water

Seeking sea level: walking the Mersey from source to sea

It pleases me, loving rivers.
Loving them all the way back to their source.
Loving everything that increases me.
– Raymond Carver

With the canal walk completed, I cast around for another project.  Then an idea began to take shape: to walk the Mersey from its source to the sea.  The Mersey is formed from three tributaries: the River Etherow, the River Goyt, and the River Tame. The official start of the Mersey is at the confluence of the rivers Tame and Goyt in central Stockport, a few miles south of Manchester. Older definitions place its start a few miles up the Goyt; for example, the 1911 Encyclopedia Britannica states, ‘It is formed by the junction of the Goyt and the Etherow a short distance below Marple in Cheshire’. 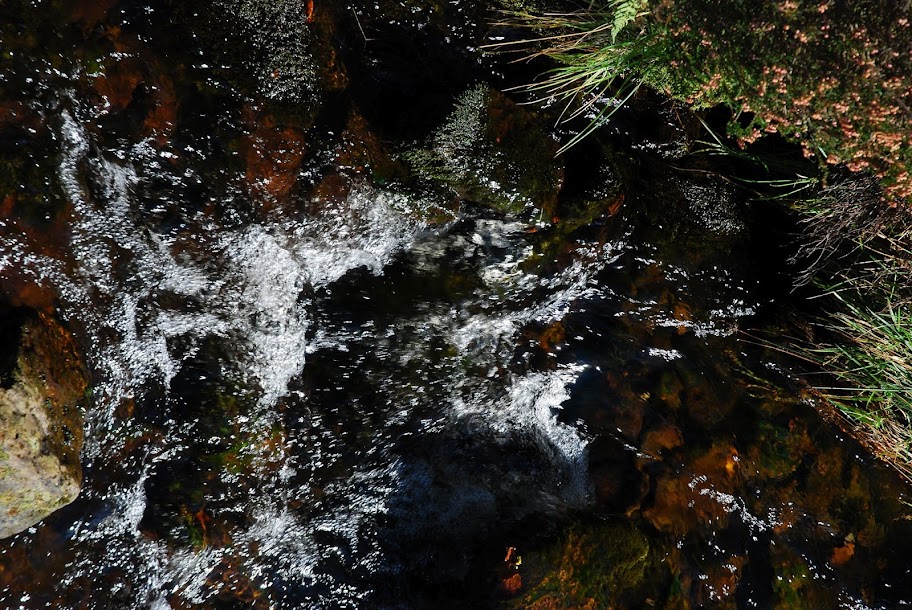 My idea is not just to walk the Mersey proper, but also its headwaters and main tributaries.  Apart from the general interest of these walks, there is a personal reason, too: it seems that my life and family history is contained in these waters.  The river Goyt rises in the Derbyshire Peak District.  A few miles to the southeast is Youlgreave, the small village where my mother was born. Derbyshire represents one tributary of my family.

Another tributary of the Mersey is the river Irwell, which flows through Manchester before joining the Mersey at Irlam. My father was born in Openshaw, to the east of Manchester city centre: the house where he grew up was a few streets from the banks of the Medlock that flows into the Irwell in the city centre. My wife’s father’s family were miners and mill-workers from Little Lever, near Bolton, where the Irwell twists and turns before heading due south to Manchester.

I grew up in Poynton, south of Manchester, in the 1950s when the village still retained visible traces of its coal-mining past and went to school in Macclesfield, near to the source of the river Bollin, yet another tributary of the Mersey.  In 1967 I left home to go to university and the car I travelled in followed the course of the Bollin and then the Mersey, over the Runcorn bridge from where the river opens out into an estuary three miles wide, before reaching Liverpool. 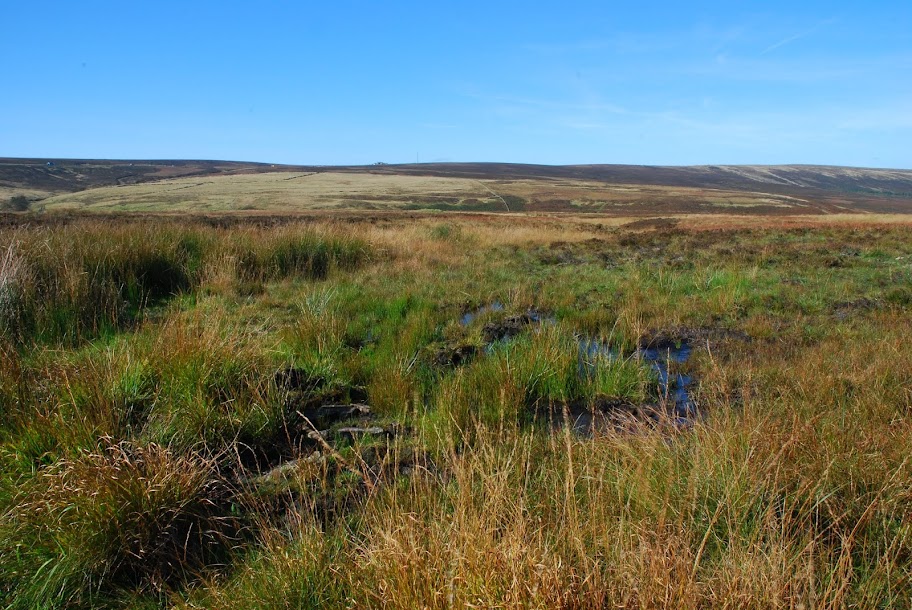 So, returning to the source…back in 2007, inspired by the excellent book, Mersey: The River That Changed The World, we sought out the source of the Goyt up on Axe Edge above Buxton in Derbyshire.  On a bright and crisp autumn day, we walked over the moors from Derbyshire Bridge down the upper Goyt valley as far as Errwood reservoir.  That’s when these photos were taken.

The name of the valley derives from the dialect word goyt or goit, meaning stream or watercourse, in turn rooted in the Old English gota.  The stream flows off the moors to cross the old Buxton to Macclesfield road at Derbyshire Bridge, once the county boundary between Derbyshire and Cheshire.  The landscape of the valley has been formed over millions of years through ice ages and by the stream that cuts down through the valley. The signs of human  influence are all around, too. 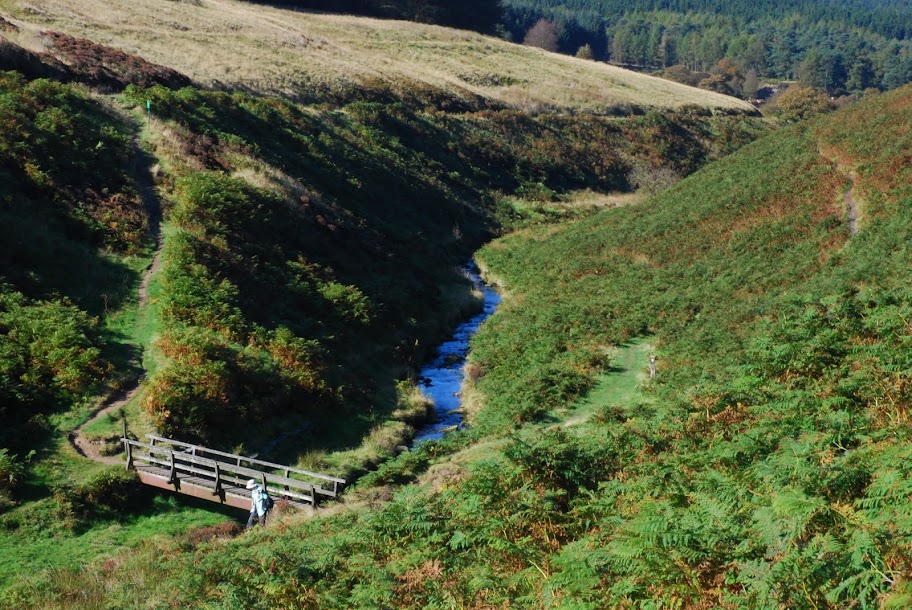 In places like this ‘where the wires end’ and ‘the moor seethes in silence’ you always have that sense, in Derek Mahon’s words, of the ‘banished gods sitting out the centuries in stone, water and the hearts of trees’:

Paros, far-shining star of dark-blue earth,
Reverts to the sea, its mother.
The tiny particles,
Rose quartz and amethyst,
Panic into the warm brine together.

Near the headwaters of the longest river
There is a forest clearing,
A dank, misty place
Where light stands in columns
And birds sing with a noise like paper tearing.

Far from land, far from the trade routes,
In an unbroken dream-time
Of penguin and whale,
The seas sigh to themselves
Reliving the days before the days of sail.

Where the wires end the moor seethes in silence,
Scattered with scree, primroses,
Feathers and faeces.
It shelters the hawk and hears
In dreams the forlorn cries of lost species.

It is here that the banished gods are in hiding,
Here they sit out the centuries
In stone, water
And the hearts of trees,
Lost in a reverie of their own natures –

Of zero-growth economics and seasonal change
In a world without cars, computers
Or chemical skies,
Where thought is a fondling of stones
And wisdom a five-minute silence at moonrise.
– Derek Mahon, The Banished Gods 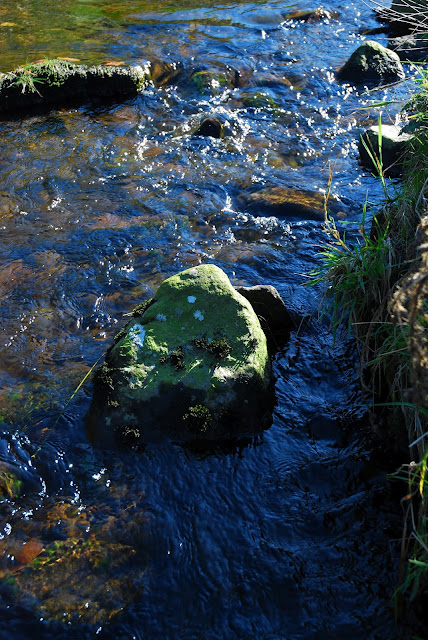 Borrowing Seamus Heaney’s words in Anahorish, it’s  a ‘place of clear water, the first hill in the world’ where ‘springs wash into the shiny grass’.  Or, Alice Oswald, evoking the source of the Dart:

listen,
a
lark
spinning
around
one
note
splitting
and
mending
it

The heather and grassland vegetation of the moorland has been formed through human influence over thousands of years. Heather, cotton grass, crowberry and bilberry are common plants here, with heather dominant in the better drained areas. Blanket bog is found on the higher, flatter and wetter areas of the moor where the vegetation is dominated by cotton grass with bilberry and big moss. 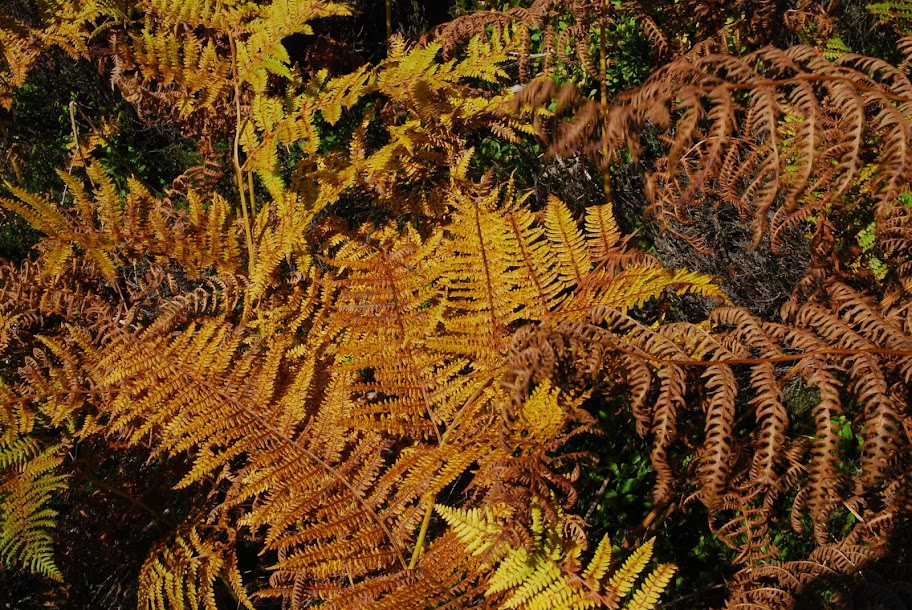 There are areas of bracken, particularly in the cloughs, the moorland valleys cut by streams.

knee-deep in bracken
wade out into green
the displaced waves
of bracken fronds
settling around you
– Thomas A Clark, The Hundred Thousand Places 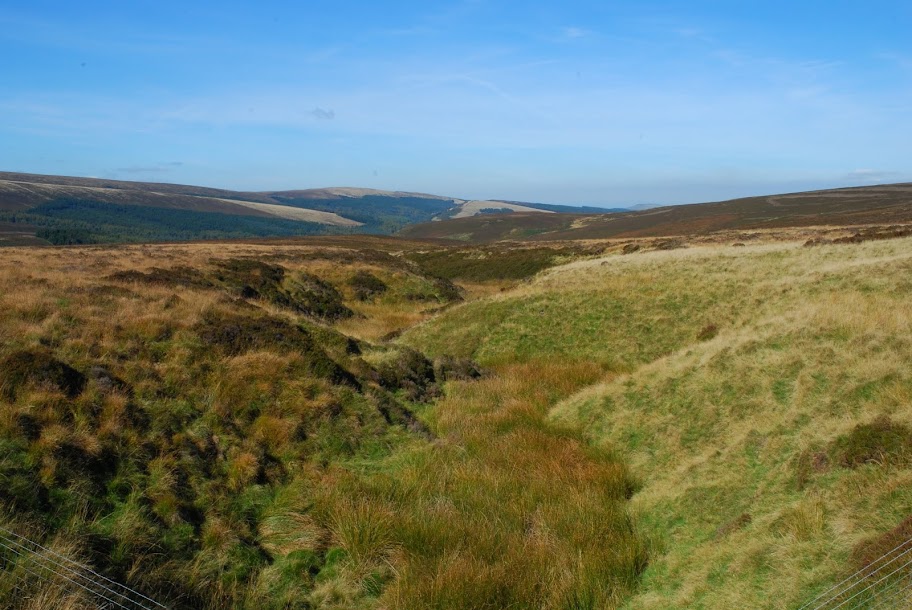 the hundred
thousand places
with a stone
and some grasses

the dwellings
in ruins
the stones
given back
– Thomas A Clark, The Hundred Thousand Places 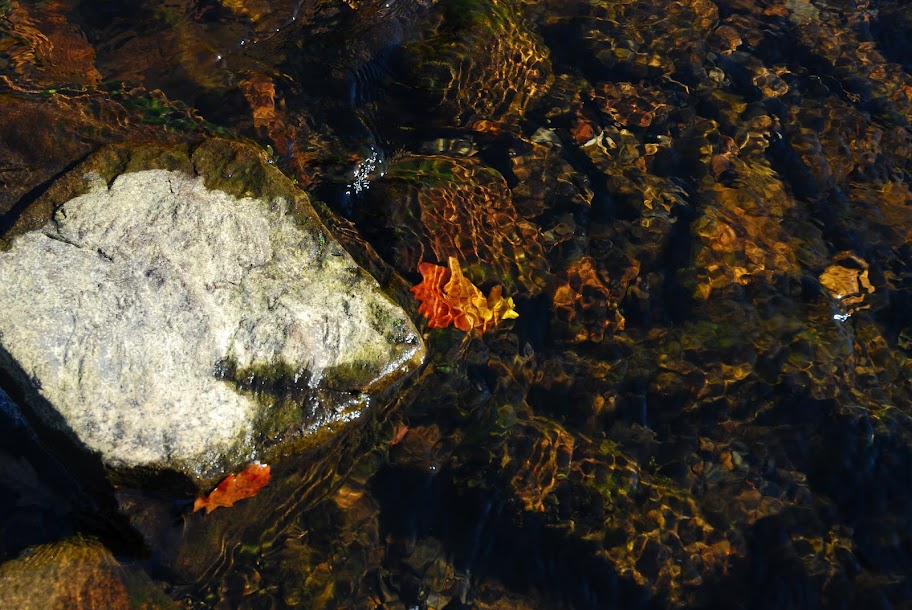 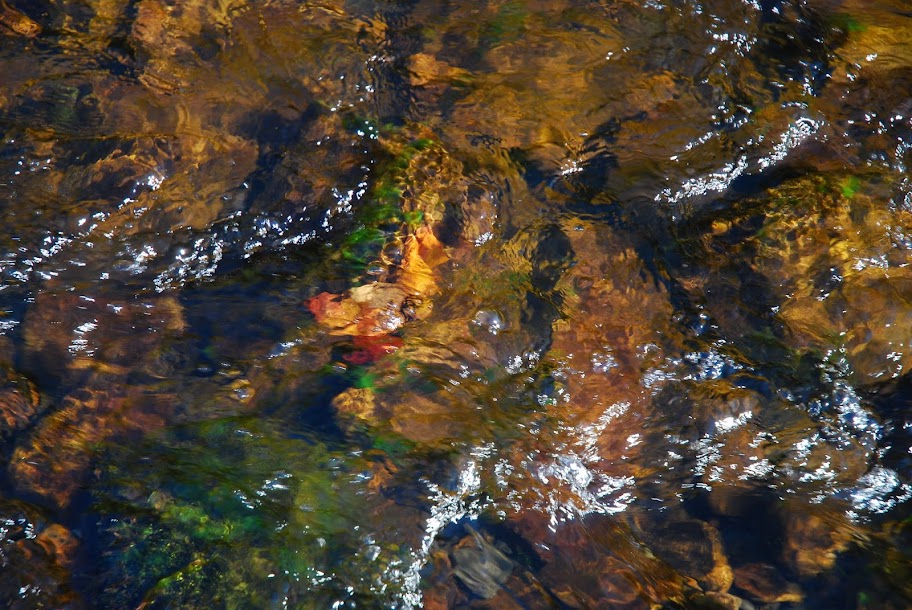 one song of water
picking up
from another

as you climb
it pours
around you 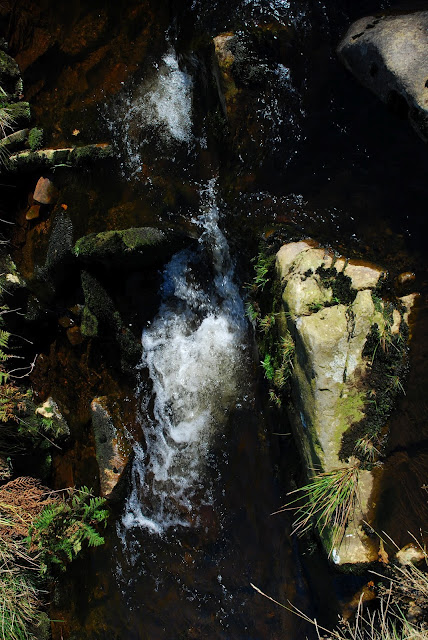 and I find you in the reeds, a trickle coming out of a bank, a foal of a river

one step-width water
of linked stones
trills in the stones
glides in the trills
– Alice Oswald, Dart 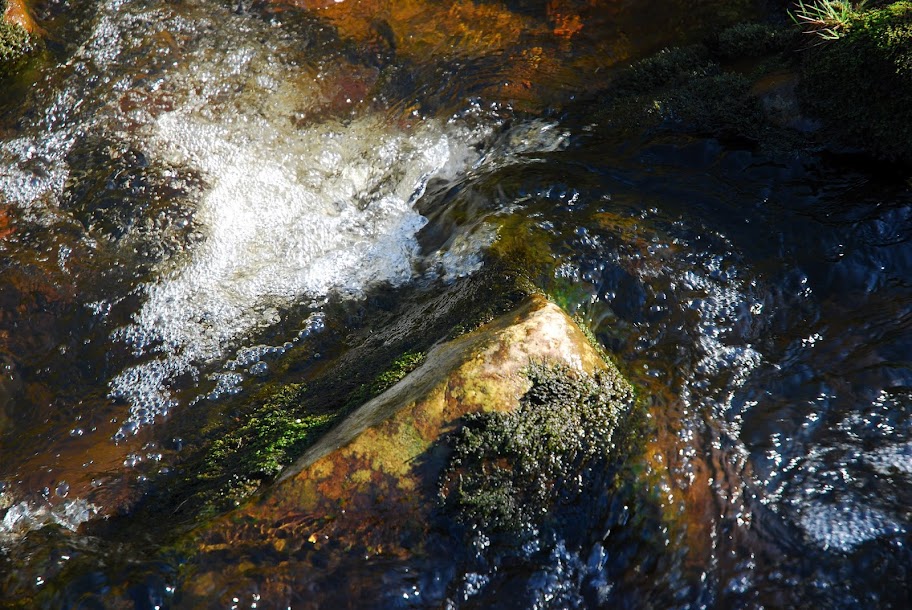 the rock by the water
broken by bracken
tormentil and heather
releases colour
– Thomas A Clark, The Hundred Thousand Places 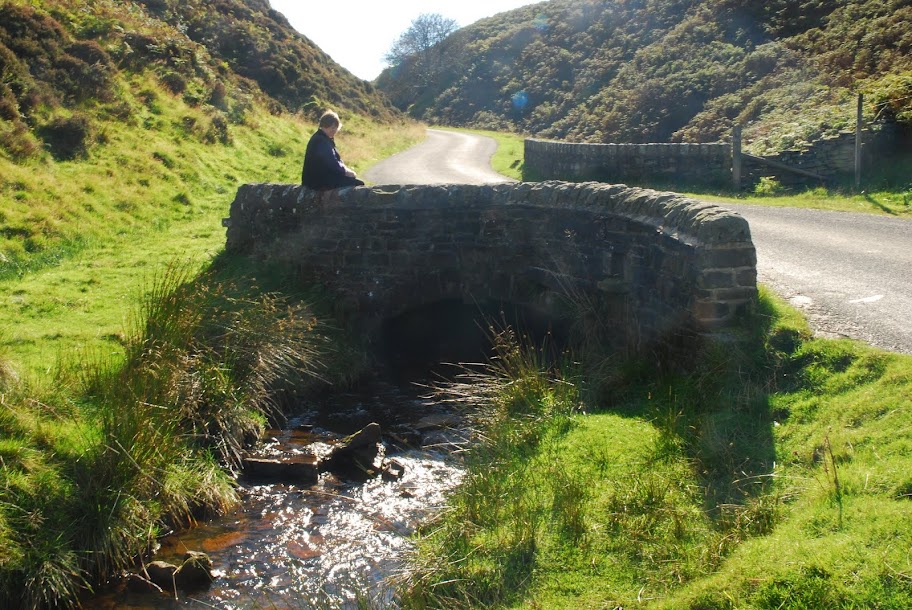 Where the stream flows through the sharp incision of Goyt’s Clough it passes under an old pack-horse bridge which was moved upstream in 1967 when Errwood reservoir was constructed to supply Stockport with water. This is a reminder that the valley has been a well-worn trade route, with  Roman roads and medieval pack-horse routes. The nearby Goytsclough quarry was where the Pickfords started trading in the late 17th century when Thomas Pickford purchased the quarry. Trains of pack horses were used to transport stone from the quarry and rather than returning empty the horses were used to return goods to the area.

By the 1740s the business was based at the end of Clumber Road in Poynton (where I grew up). In August 1756 James Pickford could describe himself as ‘the London and Manchester wagoner’ with a base in London where he employed a bookkeeper:

This is to acquaint all Gentlemen, Tradesmen and Others, that James PICKFORD the London and Manchester Waggoner has removed his Waggon from the Blossoms Inn in Lawrence Lane to the Bell Inn in Wood Street, Cheapside, from whence it goes every Wednesday. And his other Waggon goes every Saturday, as usual, from the White Bear in Basinghall Street.

Each Waggon, for the Carriage of Goods and Passengers, at reasonable Rates, goes by and through the Towns undermentioned, viz. Newcastle-under-Lyne, Congleton, Macclesfield, Stockport to Manchester, and delivers Goods etc. for Ashton-under-Lyne, Oldham, Rochdale, Bury, Bolton and other adjacent places. At which places Gentlemen etc. may depend on having their Goods. etc safely delivered. By Your Humble Servant, JAMES PICKFORD.

His vehicles took nine days to reach London and eight to return on his twice weekly service. He evidently carried passengers somewhat uncomfortably as well as goods. Poynton was a convenient base not far from his northern terminus where vehicles and animals could be looked after by local craftsmen – there was a well established smithy at Poynton Village and Midway. The route from Manchester had been turnpiked to Hazel Grove in 1724.

After his death in 1768, his son Matthew took over the business. During the years 1775-1803 he offered a coaching service to places like Bath, Birmingham, Edinburgh, Glasgow, Leeds, Liverpool – and London, as shown in this 1777 advertisement:

A new and excellent Diligence is advertised from Upper Royal Oak Inn, Manchester to London to carry 3 persons at 2s 6d each three days a week via Poynton and a flying coach on Tuesday and Thursday, inside passengers £1 16s, outside £1 1s … taking 2 days from 4 p.m., performed (if God permit) by Mr. Pickford of Poynton.

Near Goytsclough Quarry are the few remains of a 19th century paint mill, where a water powered wheel crushed barytes (mined locally) to a powder, which was used in the manufacture of paint.  Around Derbyshire Bridge are the remains of dozens of old coal mining shafts, which provided coal for homes and for the local lime burning industry. 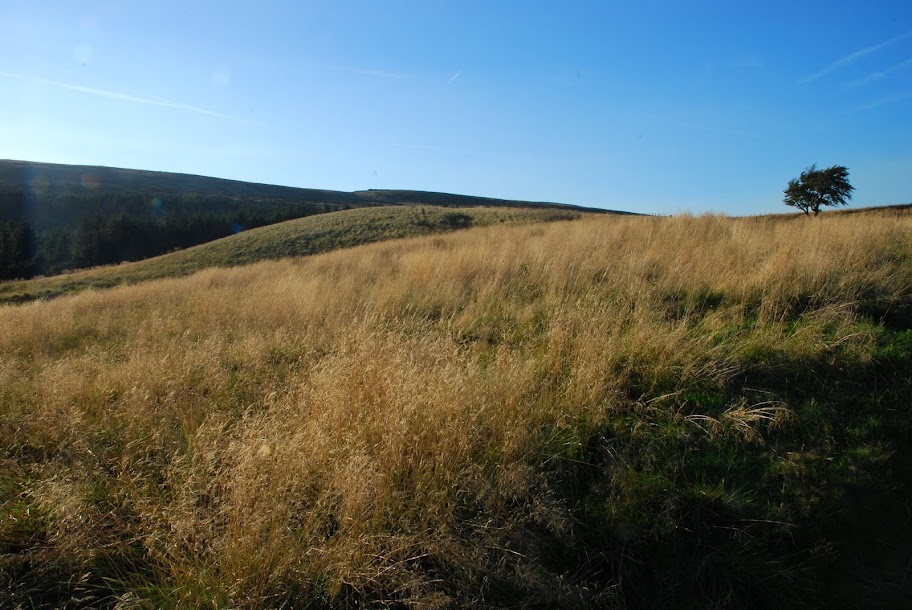 This underlines the point that before the reservoirs were built the valley was home to a thriving community with many farms, the paint works, a railway, a Victorian mansion, coal mines, a quarry, a school and even a gunpowder factory.  But an increased demand for drinking water in the early 20th century led Stockport Corporation Waterworks to acquire the land to create two reservoirs. By 1930 the farms and houses were empty and demolished in order to provide an uncontaminated water catchment area.

Much of the moorland and the cloughs that cut across it, have been designated an SSSI, in recognition of its national importance. The designation helps to protect the habitat and its valued bird community. Birds found on the moors include birds of prey and golden plover which need large undisturbed areas. There are snipe, curlew, lapwing, skylark, meadow pipit, whinchat and ring ouzel; voles, hares and foxes. 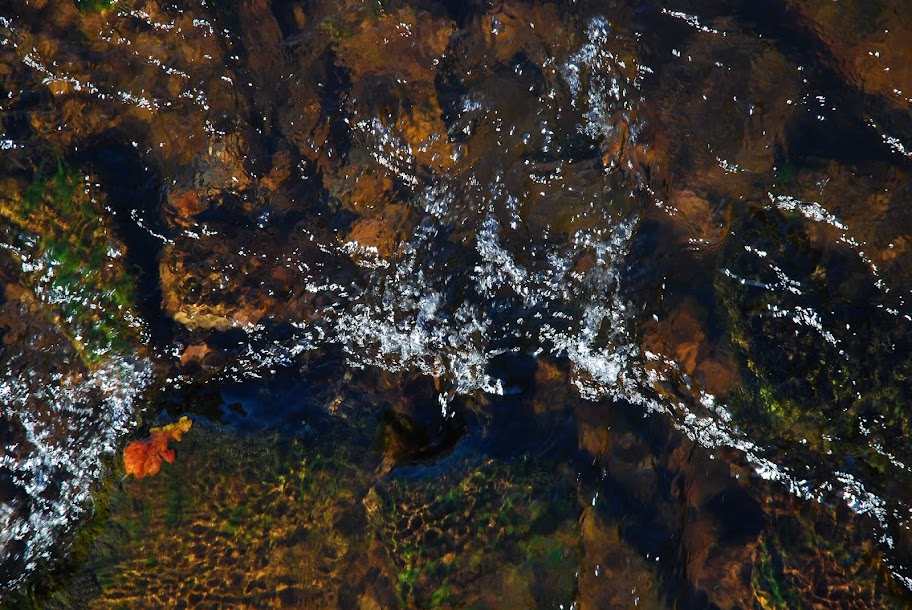 Staring at this water I wonder, how long before these drops pass the Pier Head?  They’ve along way to go, much work to do, and it continues endlessly:

Not the beck only,
Not just the water –
The stones flow also,
Slow
As continental drift,
As the growth of coral,
As the climb
Of a stalagmite.
Motionless to the eye,
Wide cataracts of rock
Pour off the fellside,
Throw up a spume
Of gravel and scree
To eddy and sink
In the blink of a lifetime.
The water abrades,
Erodes; dissoves
Limestones and chlorides;

Organizes its haulage –
Every drop loaded
With a millionth of a milligramme of fell.
The falling water
Hangs steady as a stone;
But the solid rock
Is a whirlpool of commotion,
As the fluid strata
Crest the curl of time,
And top-heavy boulders
Tip over headlong,
An inch in a thousand years.
A Niagara of chock-stones,
Bucketing from the crags,
Spouts down the gullies.
Slate and sandstone
Flake and deliquesce,
And in a grey
Alluvial sweat
Ingleborough and Helvellyan
Waste daily away.
The pith of the pikes
Oozes to the marshes,
Slides along the sykes,
Trickles through ditch and dub,
Enters the endless
Chain of water,
The pull of the earth’s centre –
An irresistable momentum,
Never to be reversed,
Never to be halted,
Till the tallest fell
Runs level with the lowland,
And scree lies flat as shingle,
And every valley is exalted,
Every mountain and hill
Flows slow.
– Norman Nicholson, Beck 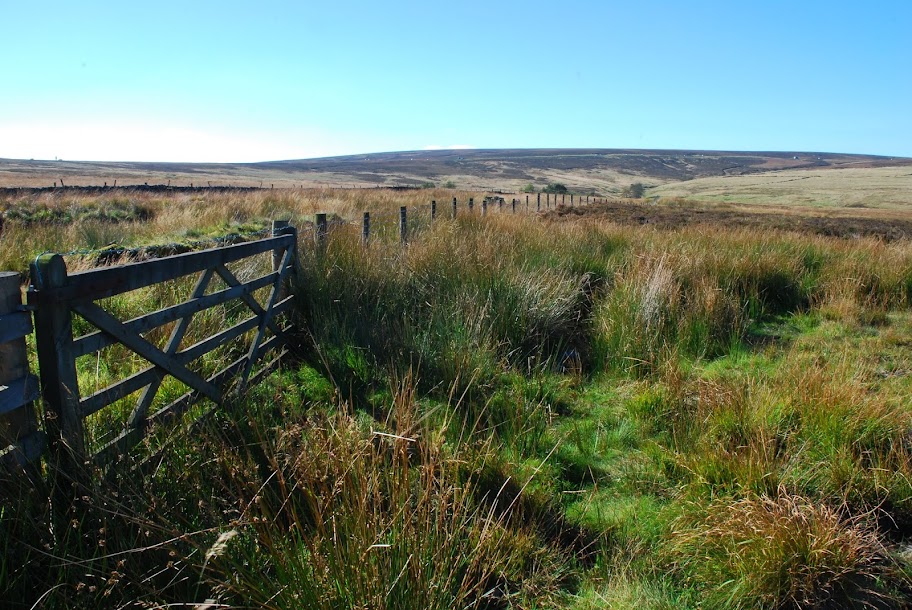