Swallows: circling with their shimmering sound

She flicks past, ahead of her name..

The morning walk with the dog takes me through wooded glades and open fields in Sefton Park.  This morning, for the first time in ages, was bright and sunny (it’s exactly a month now since the good weather broke, to be succeeded by a dispiriting and seemingly endless parade of days of rain and grey skies, with temperatures struggling to reach 20C).  But there’s one thing that always lifts my spirits on summer mornings – crossing the open fields, swallows swirl and dive around me at waist height.  I know really that they’re catching insects in flight, but it always feels as if they’re playing with me, joyously chittering and swooping as I walk.  Sometimes they’re so close I can hear the snap of their wing feathers.  They’re always turned out smart: glossily be-suited in top hat and tails.

Swallows have inspired a great many poets, often captivated by the freedom of their flight. In this vein, Sara Teasdale, the American lyrical poet, wrote Swallow Flight in the 1930s:

I love my hour of wind and light,
I love men’s faces and their eyes,
I love my spirit’s veering flight
Like swallows under evening skies.

The Scottish poet, Kathleen Jamie, ‘has a perennial eye upon the natural world, the animals, flora and fauna of wherever she happens to be. There’s a great deal of walking to be done, observations of local landscapes, flowers and plants, fish and above all birds’.  In The Tree House, she writes:

I wish my whole battened
heart were a property
like this, with swallows
in every room – so at ease

up the stairwell
to stream out into light

Another poem by Sara Teasdale, There Will Come Soft Rains, lent its name to a short story by Ray Bradbury in the collection The Martian Chronicles which I remember reading as a teenager. The story concerns a robotic house after its inhabitants have died in a nuclear war. The house is undamaged and fully automated. It continues to serve the dead family, unaware of their absence, though aware of other external and internal disruptions such as the weather and birds attempting to land on it. Throughout the story, the house makes breakfast, disposes of it uneaten, and performs various domestic tasks, before it finally burns down in a fire started by a fallen tree limb.  Sara Teasdale’s poem has a similarly post-apocalyptic setting:

There will come soft rains and the smell of the ground,
And swallows circling with their shimmering sound;

And frogs in the pool singing at night,
And wild plum trees in tremulous white;

Robins will wear their feathery fire,
Whistling their whims on a low fence-wire;

And not one will know of the war, not one
Will care at last when it is done.

Not one would mind, neither bird nor tree,
If mankind perished utterly;

And Spring herself when she woke at dawn
Would scarcely know that we were gone.

For centuries we could not untangle the mysteries of the swallow’s migration: the belief persisted that the birds hibernated at the bottom of ponds or in wet mud. Gilbert White still holds to it in his Selborne letters. Swallows were caught and kept through the winter in greenhouses.

The swallow’s migratory journey is extraordinary: it arrives in the UK around mid-April, having flown 6,000 miles from its winter home in southern Africa. The journey takes about four weeks, and for centuries people have celebrated their sudden appearance as a sign that summer is on the way.

Scientists continue to learn more about the astonishing feat of swallow migration, delving into the mystery of how they navigate their way back to the same nesting place each spring.  But it’s all in A Swallow by Ted Hughes:

She flicks past, ahead of her name,
Twinkling away out over the lake.

Reaching this way and that way, with her scissors,
Snipping midges
Trout are still too numb and sunken to stir for.

Sahara clay ovens, at mirage heat,
Glazed her blues, and still she is hot.

She wearied of snatching clegs off the lugs of buffaloes
And of lassooing the flirt-flags of gazelles.

They told her the North was one giant snowball
Rolling South. She did not believe them.
So she exchanged the starry chart of Columbus
For a beggar’s bowl of mud.

Setting her compass-tremor tail-needles
She harpooned a wind
That wallowed in the ocean,
Working her barbs deeper
Through that twisting mass she came –

Did she close her eyes and trust in God?
No, she saw lighthouses
Streaming in chaos
Like sparks from a chimney – She had fixed her instruments on home.

And now, suddenly, into a blanch-tree stillness
A silence of celandines,
A fringing and stupor of frost
She bursts, weightless –
to anchor
On eggs frail as frost.

There she goes, flung taut on her leash,
Her eyes at her mouth-corners,
Water-skiing out across a wind
That wrecks great flakes against windscreens.

In Work And Play, also by Ted Hughes, we are back celebrating the swallow’s freedom, ‘cartwheeling through crimson’. But for Hughes, all is not what it seems:

The swallow of summer, she toils all the summer,
A blue-dark knot of glittering voltage,
A whiplash swimmer, a fish of the air.
But the serpent of cars that crawls through the dust
In shimmering exhaust
Searching to slake
Its fever in ocean
Will play and be idle or else it will bust.

The swallow of summer, the barbed harpoon,
She flings from the furnace, a rainbow of purples,
Dips her glow in the pond and is perfect.
But the serpent of cars that collapsed on the beach
Disgorges its organs
A scamper of colours
Which roll like tomatoes
Nude as tomatoes
With sand in their creases
To cringe in the sparkle of rollers and screech.

The swallow of summer, the seamstress of summer,
She scissors the blue into shapes and she sews it,
She draws a long thread and she knots it at the corners.
But the holiday people Are laid out like wounded
Flat as in ovens
Roasting and basting
With faces of torment as space burns them blue
Their heads are transistors
Their teeth grit on sand grains
Their lost kids are squalling
While man-eating flies
Jab electric shock needles but what can they do?

They can climb in their cars with raw bodies, raw faces
And start up the serpent
And headache it homeward
A car full of squabbles
And sobbing and stickiness
With sand in their crannies
Inhaling petroleum
That pours from the foxgloves
While the evening swallow
The swallow of summer, cartwheeling through crimson,
Touches the honey-slow river and turning
Returns to the hand stretched from under the eaves –
A boomerang of rejoicing shadow.

By early September, most swallows are preparing to migrate. They flutter about restlessly, and often gather on telegraph wires. Most leave the UK during September, with early broods of youngsters being the first to go. But a few stragglers may hang around into October. 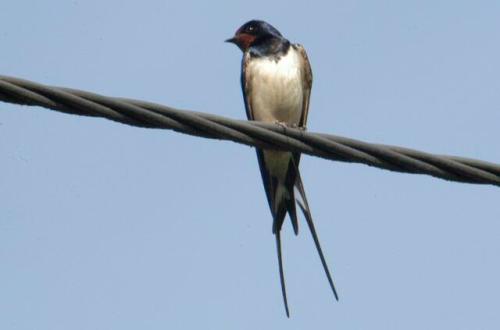 The return journey to southern Africa takes about six weeks. They travel down through western France and eastern Spain into Morocco, before crossing the Sahara Desert and the Congo rainforest – finally reaching South Africa and Namibia.  They migrate during daylight, flying quite low and covering about 200 miles each day. At night they roost in huge flocks in reed-beds at traditional stopover spots. Since swallows feed entirely on flying insects, they don’t need to fatten up before leaving, but can snap up their food along the way. Nonetheless, many die of starvation. If they survive, they can live for up to sixteen years.

In The Blue Swallows, Howard Nemerov cautions against the tendency to see ourselves reflected in nature, or truths revealed to us through nature:

Thus helplessly the mind in its brain
Weaves up relation’s spindrift web,
Seeing the swallows’ tails as nibs
Dipped in invisible ink, writing…

He asks: ‘Poor mind, what would you have them write?/ Some cabalistic history/ Whose authorship you might ascribe/ To God?’ and concludes:

O swallows, swallows, poems are not
The point. Finding again the world,
That is the point, where loveliness
Adorns intelligible things
Because the mind’s eye lit the sun.

This is the poem in full:

Across the millstream below the bridge
Seven blue swallows divide the air
In shapes invisible and evanescent,
Kaleidoscopic beyond the mind’s
Or memory’s power to keep them there.

“History is where tensions were,”
“Form is the diagram of forces.”
Thus, helplessly, there on the bridge,
While gazing down upon those birds—
How strange, to be above the birds!—
Thus helplessly the mind in its brain
Weaves up relation’s spindrift web,
Seeing the swallows’ tails as nibs
Dipped in invisible ink, writing…

Poor mind, what would you have them write?
Some cabalistic history
Whose authorship you might ascribe
To God? to Nature? Ah, poor ghost,
You’ve capitalized your Self enough.
That villainous William of Occam
Cut out the feet from under that dream
Some seven centuries ago.
It’s taken that long for the mind
To waken, yawn and stretch, to see
With opened eyes emptied of speech
The real world where the spelling mind
Imposes with its grammar book
Unreal relations on the blue
Swallows. Perhaps when you will have
Fully awakened, I shall show you
A new thing: even the water
Flowing away beneath those birds
Will fail to reflect their flying forms,
And the eyes that see become as stones
Whence never tears shall fall again.

O swallows, swallows, poems are not
The point. Finding again the world,
That is the point, where loveliness
Adorns intelligible things
Because the mind’s eye lit the sun.

One thought on “Swallows: circling with their shimmering sound”