Map a horizontal line at 2,039 metres above sea level.  Mark it with a hundred lifesize, cast-iron figures placed in isolated locations, some nearly impossible to reach.  This is the latest and last of Antony Gormley’s field experiments – multiple statues of the artist placed in cities and landscapes to act as ‘silent witnesses’.  These stunning images are from a gallery at The Guardian website. The text is extracted from the accompanying Guardian feature.

Horizon Field is one of the most ambitious of his projects and has taken five years to pull off: 100 cast iron versions of Gormley carefully winched by helicopters into the deep summer green countryside of the Austrian Alps, all precisely positioned – give or take 5cm – at 2,039 metres above sea level. In a few months, they’ll be submerged in snow. Some are easy to find and touch; others are nearly impossible to reach. 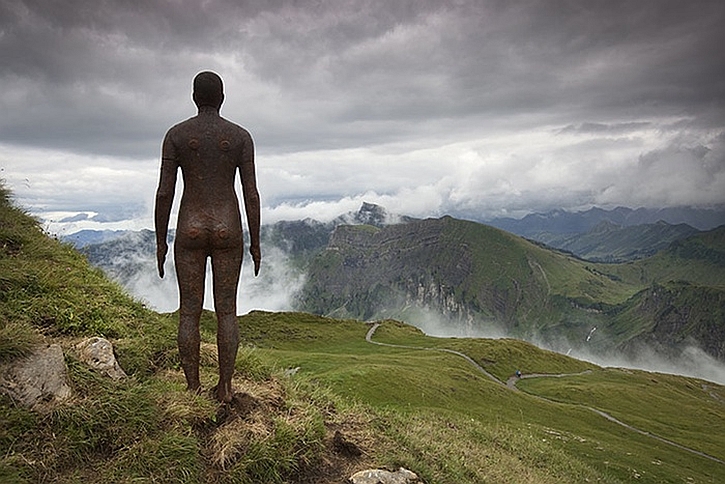 The project, a collaboration with the Kunsthaus Bregenz, has been hugely complicated logistically, particularly because of Gormley’s insistence on the figures being in a horizontal line, and involved the Austrian army and mountain rescue teams.  In Austria, most visitors will need to take a half-hour cable journey to see them.

Cast iron figures of Gormley have been placed around cities and landscapes from Crosby beach to London to Australia to Calabria but the alpine project is the last of them, said the artist.

Gormley said the work addressed a simple question: where does the human project fit inside the bigger question of the planet’s future?

“The art work is in a way less important than the work people will do with these objects. The looking, the finding, the not finding, the relationship between something you can touch, you can see, you can imagine.

I am working on the body from inside, using my own as a model. They’re not like statues. They’re almost forensic, evidence of where a body once stood. There is no expression, no virtuosity in the way they’re made. There is a distinction between my work and Rodin’s. A Rodin [sculpture] is made, manipulating skilfully… modelling clay. None of that pertains to my work. I simply stand there, mould it, and the result… is cast in iron. I’m not wanting to call attention to the beauty of my handiwork.

Henry Moore viewed sculpture as an art of the open air. Gormley talks of wanting to ‘liberate’ it from the ghetto of galleries, and likens the bareness of his figures to man’s vulnerability.  The artist sees the figures as “silent witnesses” that change the feeling about where you are:

“The works are neither representations nor symbols, but [define] the place where a human being once was, and where any human being could be… [It] asks basic questions – who are we, what are we, where do we come from and to where are we headed?”

He wanted the statues to look in all directions without ever facing each other:

“It’s important to me that it’s the viewer who has a direct relationship with the sculpture. It’s important there’s no drama. I’m not putting them into a tableau. It’s called Horizon Field. They’re all facing a horizon, or making a horizon themselves.”

On 7 August, The Guardian published an essential piece by Gormley in which he discusses Horizon Field as ‘the last of my attempts to ask a simple question in material terms: “Where does the human being fit in the scheme of things”?’  He writes:

Sculpture doesn’t need a roof or a label. You don’t need to pass over the threshold of an institution in order to experience something that engages your imagination and, with luck, your body. When placed in the outdoors in rain and sunshine, in summer and winter, in daylight and moonlight, sculpture, in my view, begins to live and its silence becomes a potent marker in time and space. People may well ask “What the hell is this thing doing here?” and the work returns that question and it responds reflexively “What the hell are you doing here?” […]

All of the sculptures I have placed within this social and geological landscape are made from inside, from the other side of appearance, celebrating a moment of being in time. They are my attempts to immerse myself in the stillness and silence of sculpture in the belief that we need these qualities in a time in which everything is erasable and instantly replaceable. Sculpture can turn us back to the primacy of first-hand experience rather than the mediated world of our built habitat.