Last night we returned to one of our favourite music venues – Manchester’s Royal Northern College of Music – for the main event of this year’s Manchester Jazz Festival.  The new Anglo-American quartet that seems to go under no other name than the ungainly Simcock-Walker-Swallow-Nussbaum was assembled by Gwilym Simcock and Mike Walker, both musicians with strong Mancunian associations. 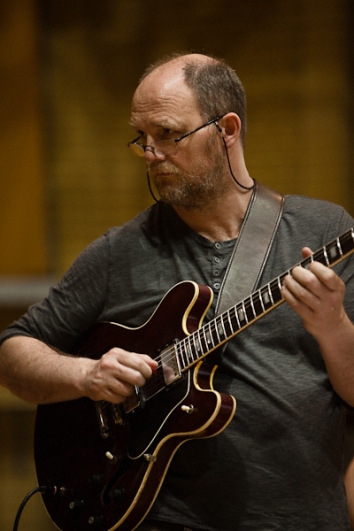 Pianist Gwilym Simcock studied music at Chetham’s School of Music and performed at the RNCM often during his time in Manchester, while guitarist Mike Walker was born in Salford and has been a regular on the northwest jazz scene since the 1980s, at the same time playing with international luminaries and building a reputation as an inventive and versatile jazz guitarist.  The lineup with Swallow and Nussbaum is very new – they only played their first date in May this year.  Mike and Gwilym had met several times during Gwilym’s time in Manchester but had never got round to playing together. The idea germinated in 2008 when Gwilym met Swallow and Nussbaum whilst they were in the UK. Steve Swallow has played bass with many of the jazz greats, particularly Carla Bley. Adam Nussbaum (drums) has also collaborated with a long list of musicians, including Sonny Rollins and Dave Liebman, and he and Steve Swallow have played together on a whole range of projects. 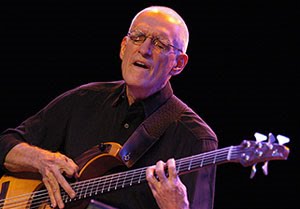 It was difficult to believe that the partnership was so new – the four musicians played dazzling, melodically enthralling music as if they had been together for years, with both the music and the on-stage chemistry exhibiting great wit and good humour. The repertoire consisted mainly of tunes from Simcock and Walker, but with Nussbaum and Swallow also contributing numbers.

Walker’s ‘The Clockmaker’, was introduced by his own solo guitar and contained fine solos from himself, Swallow and Simcock, while the latter introduced ‘You Won’t Be Around To See It’ as a piece borrowing from the methods used on Swallow’s Real Book solo album to subvert the chord changes of the standard ‘Softly As In A Morning Sunrise’.  It was an exciting composition with rock-influenced guitar and a sparkling piano solo.

Nussbaum’s atmospheric ‘We Three’ segued into Simcock’s ‘Play The Game’.

Walker’s beautiful ‘When You Hold Her’ began with Simcock providing a delicate piano intro, but later Walker’s soaring guitar solo took us into Hendrix territory.

‘Wallenda’s Last Stand’ was dedicated by Mike Walker to the high-wire walker Karl Wallenda, who fell at the age of 74 on his last walk in Buenos Aires. This number featured Simcock on melodica with Nussbaum on hand drums,  evoking the tango rhythms of Buenos Aires.

Nussbaum’s blues ‘Hey, Pretty Baby’ was an outstanding exploration of blues structures, featuring a greatl drum intro and wailing blues guitar from Walker. This was followed by a rendition of Steve Swallow’s composition ‘Ladies In Mercedes’.

For the encore, the band offered the quiet and simply titled ‘Gwil’s Tune’, a lilting melody to send us home to our beds, said Gwilym.

The London Jazz review said, after the second night of the tour:

Mike Walker ‘s playing, for those who don’t know it, is one of the greatest joys of British jazz. There’s a capacity to play on the borders of silence, and yet with an astonishing range of colour. And to build from there, organically to full-on Hendrix. He never disappoints.

Complete fluidity of movement around the drum kit seems like second nature to Adam Nussbaum. He is some sort of ideal of the creative drummer who brings astonishing vitality and freedom to the sound. I find Steve Swallow ‘s subtle, gentle presence, his economy of movement and language completely and consistently mesmerising.

Gwilym Simcock also is in his element in this group. He had spoken to me a few weeks ago about bringing together four very distinct and individual personalities and sounds, and was enthused, even thrilled by the prospect of the collective sound which would emerge. I particularly enjoyed his Corea-like excursions on Mike Walker’s composition ‘Laughlines’, but there was much else to enjoy.

The Guardian’s John Fordham reviewed them at Ronnie Scott’s in May:

Jazz supergroups are volatile concoctions, bespoke teams of virtuosi often just getting in each other’s way. But the Anglo-US quartet built from scratch this week around the untried partnership of pianist Gwilym Simcock and Salford guitarist Mike Walker, with Americans Steve Swallow on bass and Adam Nussbaum on drums, fulfilled all its promise – and then some.

With everything from prize-winning albums to Prom concerts under his belt, Simcock’s international stature is secure – but Mike Walker, though almost two decades older, has been a peripheral figure. Yet Walker’s contribution to this ensemble was nothing short of sensational, through plenty of quiet but compellingly lyrical music, as well as some postbop gallops and a spectacular roaring blues.