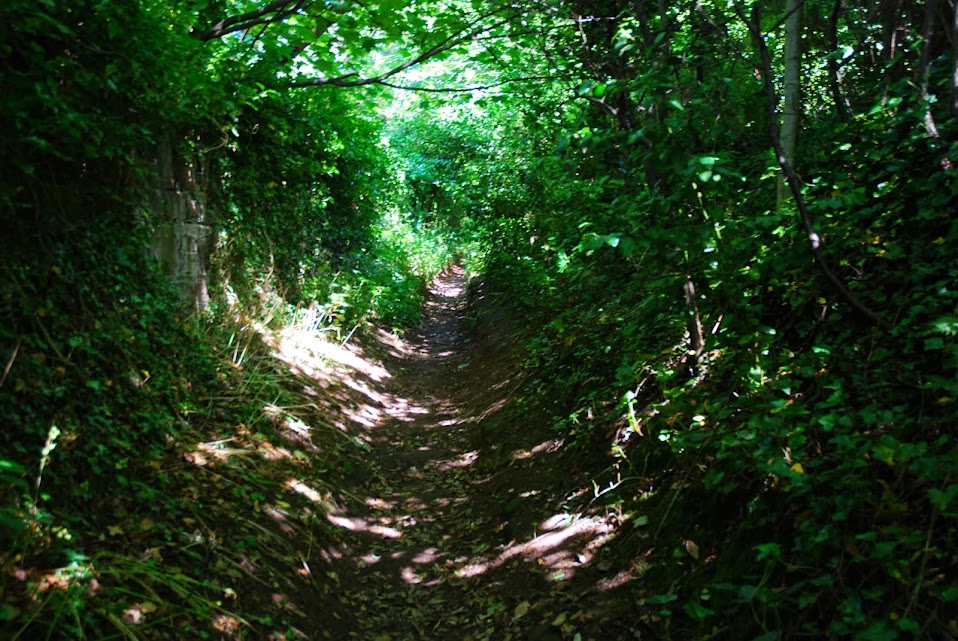 It rained through the night – the first time for weeks – but by lunchtime the sun was burning again. On the spur of the moment I decided to take the dog and follow a walk around Caldy Hill on the Wirral.  It’s pleasantly varied terrain – through the pretty sandstone village, down shady, wooded bridle paths, across sandstone heathland and then down to the Dee shore and back along the beach.

From the Wirral Way car park, a bridleway leads you up to the village of Caldy. The name Caldy probably comes from old Norse words meaning ‘cold islands’ referring to a time when this  area was included in the same administrative region as the Hilbre islands. Norsemen settled on the Wirral shortly after AD 900. 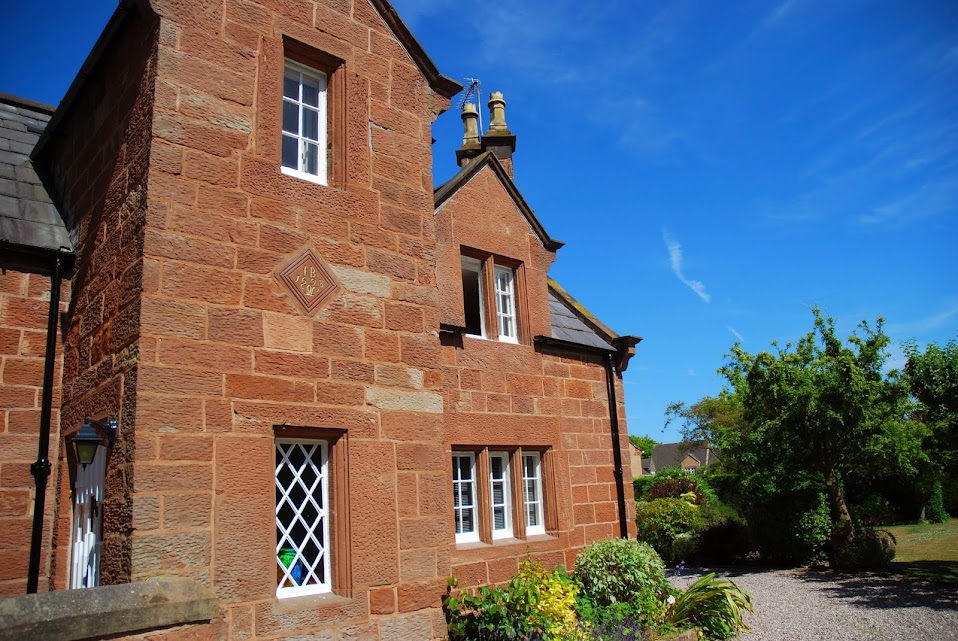 Caldy was first mentioned in the Domesday Book.  Much of what you see today are sandstone buildings and farmhouses that developed around the old village and manor in the late 17th century, such as the house above with a 1702 date stone above the door. 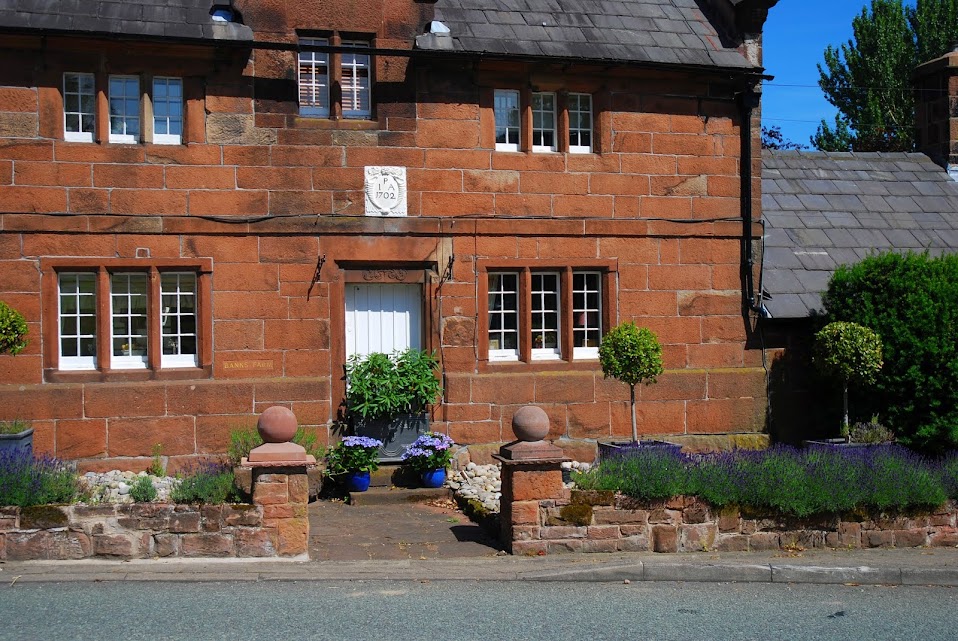 Carved stones date several buildings to the late 1600s and early 1700s,  like the 1683 Manor Farm [above] made from huge sandstone blocks, covered by a slate roof. In the 1830s, a wealthy Manchester businessman, Richard Barton, bought the village and set about renovating local properties. He built huge Caldy Manor (below) complete with clock tower. 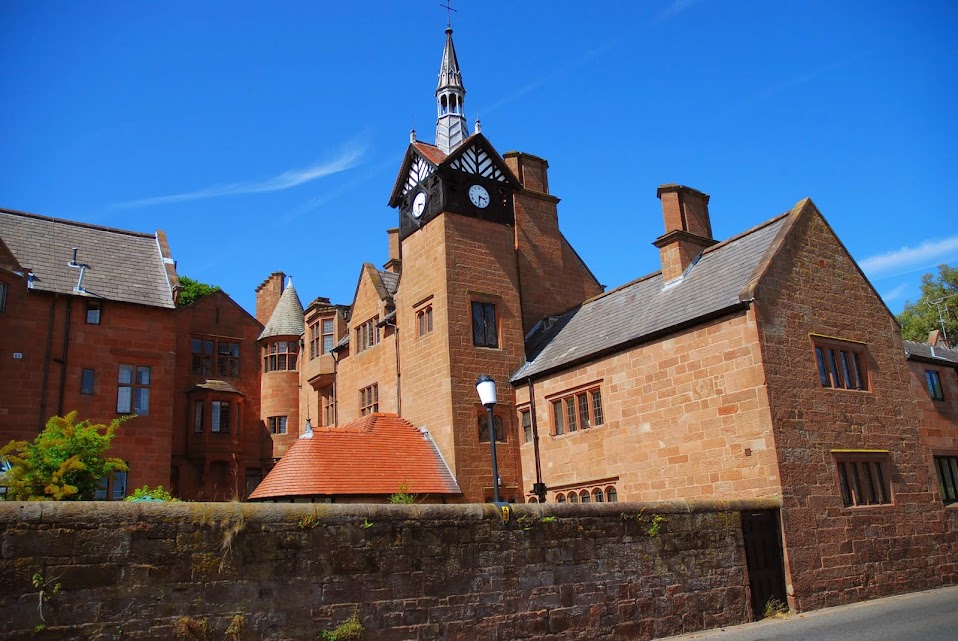 Out of the village centre, I turned up another bridleway, an old path called Fleck Lane, through a stretch of old wildwood with a great variety of deciduous trees. 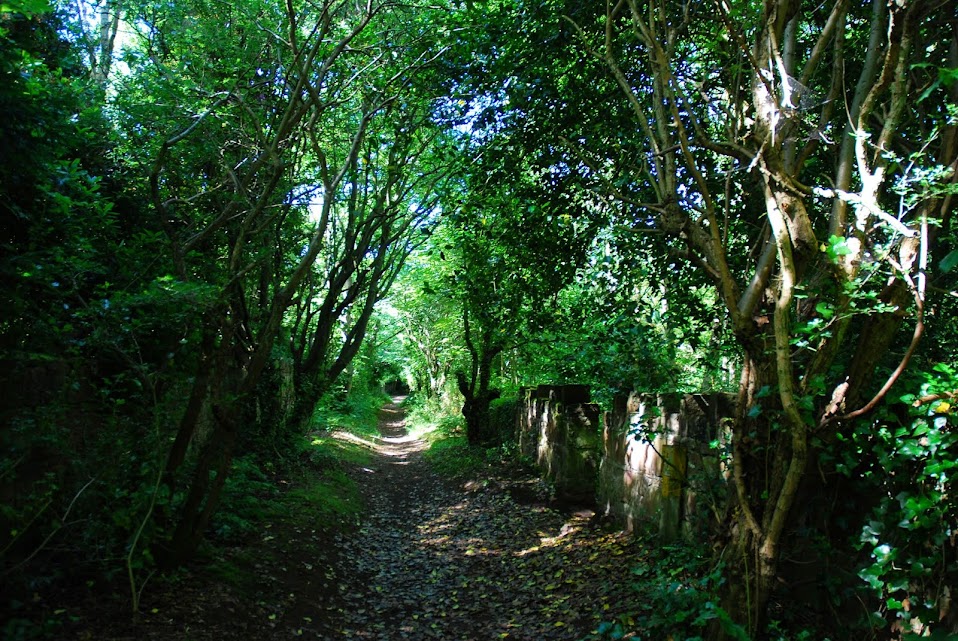 The path finally brings you out onto Caldy Hill, an area of lowland heath. This type of habitat is threatened in the UK so the hill is very important. Heathland soils are typically poor in nutrients and only certain plants can put up with these conditions. 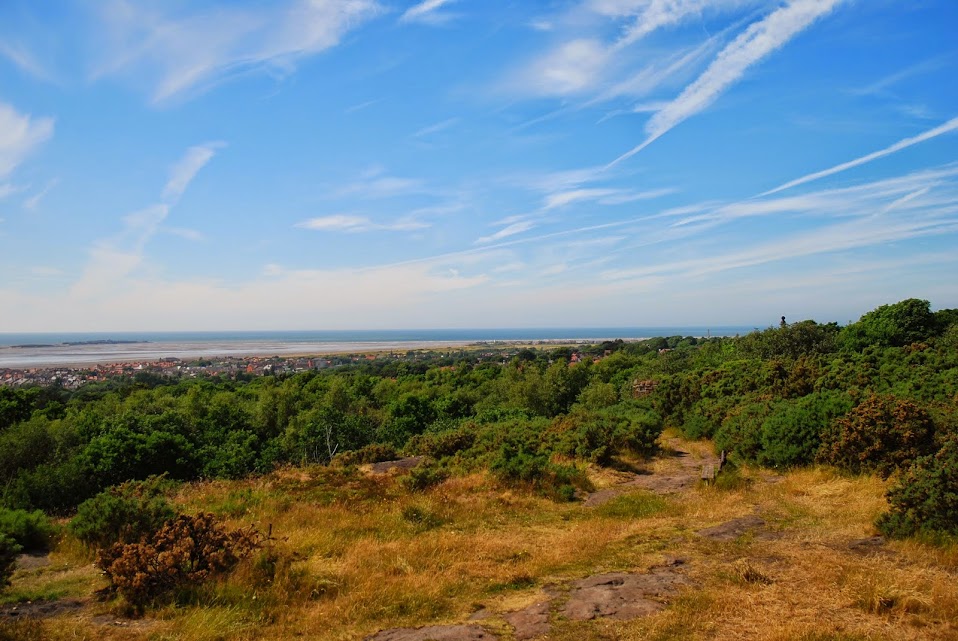 Three types of heather are found here: the commonest is ling, but there is also bell heather and cross-leaved heather.  There is also a huge amount of gorse; if I had been here three or four weeks ago, the whole of the heath would have been a a blaze of yellow. In the spring  the heath teems with Willow Warblers and Chiffchaffs. All three Woodpeckers, Jays, Nuthatches and a variety of Warblers and Tits can be seen 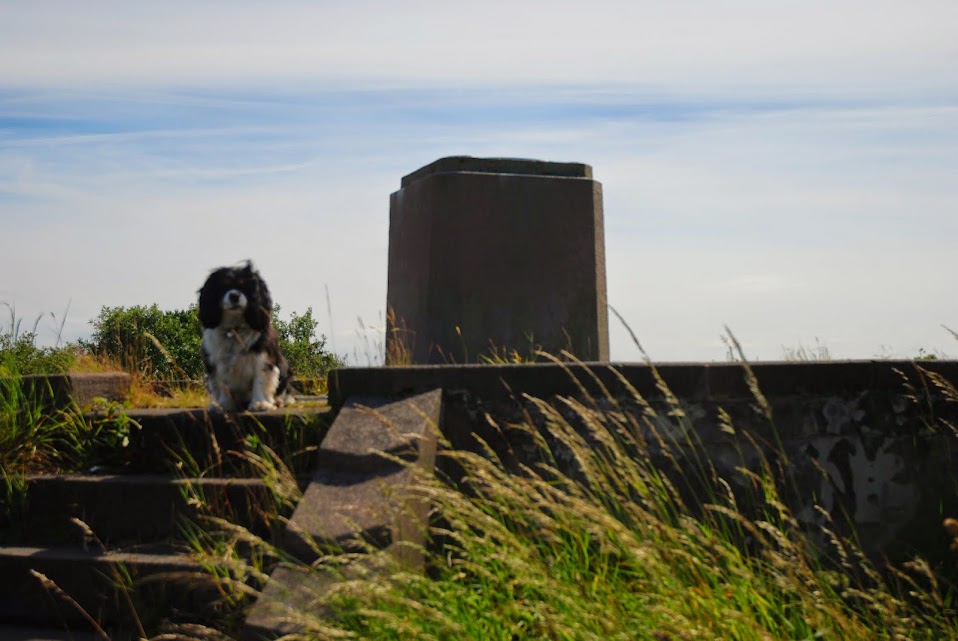 At the highest point on the heath is a viewfinder mounted on a stone plinth which provides a guide to the superb views. On a clear day, you can see Anglesey (47 miles away and even Snaefell mountain on the Isle ofMan (81  miles) .  Today, Anglesey and the Snowdon range were visible, and, closer, the Hilbre Islands off West Kirby in the Dee estuary.

The sandstone outcrop, on which the hill is located, is part of a ridge which extends from Heswall through Thurstaston and onto the Hilbre Islands. The land is now protected by the National Trust. 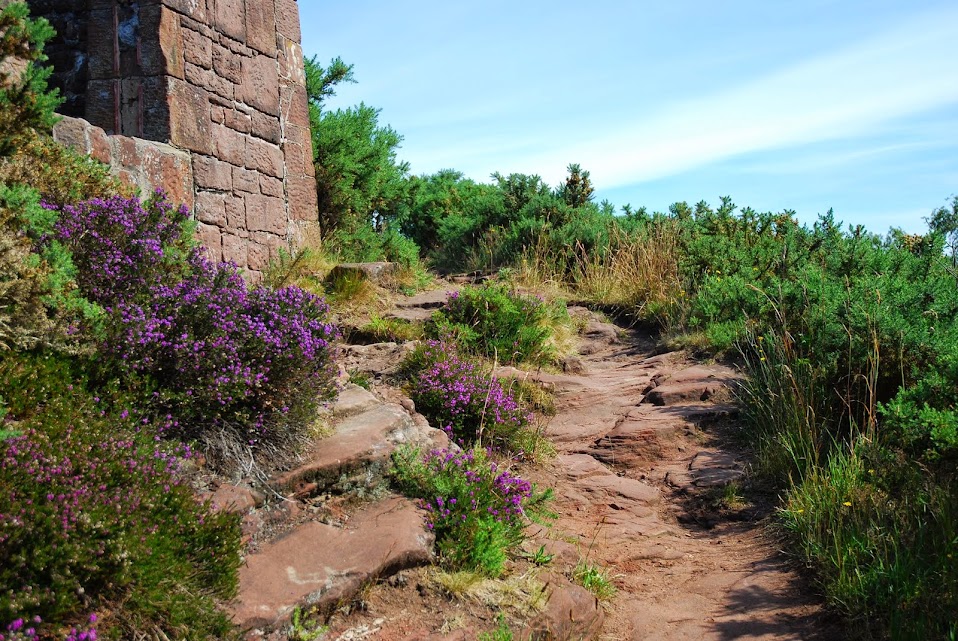 Paths over bare sandstone eventually bring you to the Mariners’ Beacon, erected in 1841 as a navigation aid for shipping.  The Beacon replaced a windmill that seafarers had found an invaluable landmark until it was destroyed in a storm  1839. The granite millstone at the base of the column came from the mill. 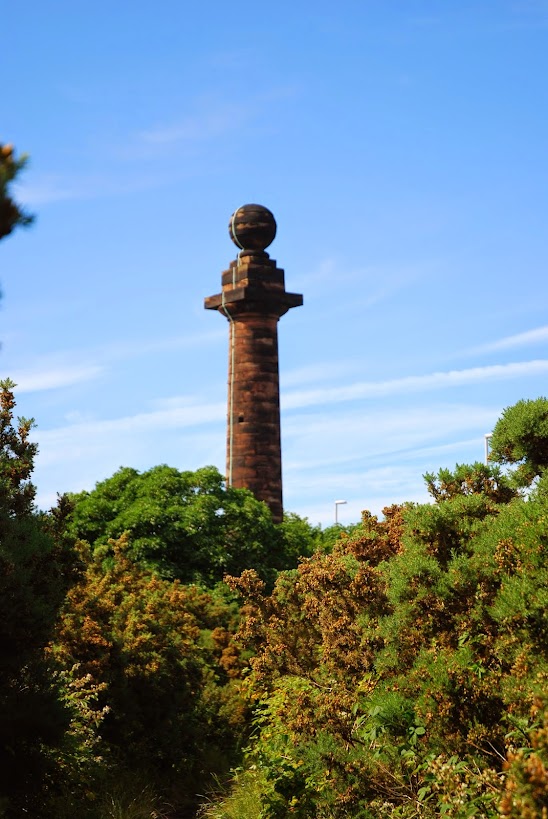 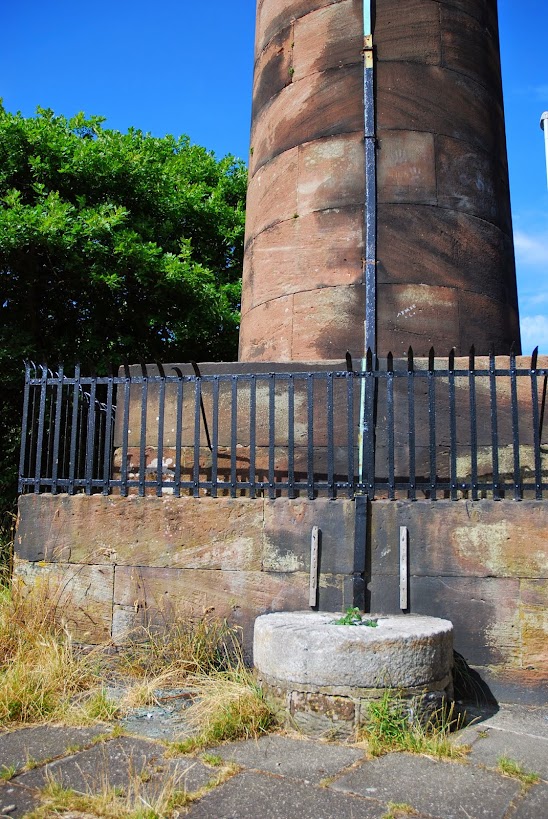 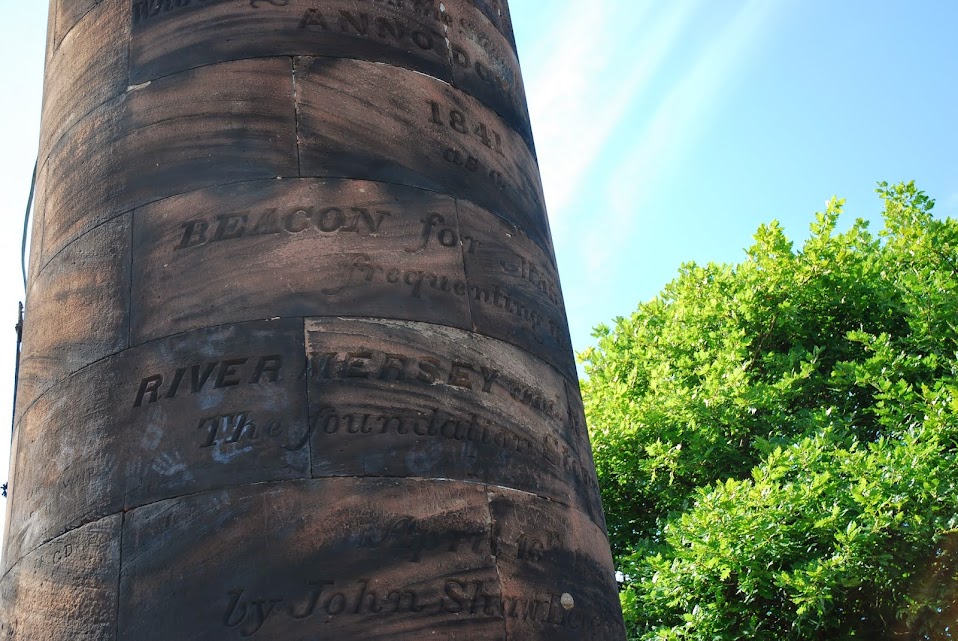 From the Beacon I descended to the Wirral Way, opened in 1973 as  Britain’s first designated Country Park.   Previously  it was a railway line, opened in 1886 to encourage Victorian city-dwellers to take day trips to the
seaside at West Kirby and Hoylake. 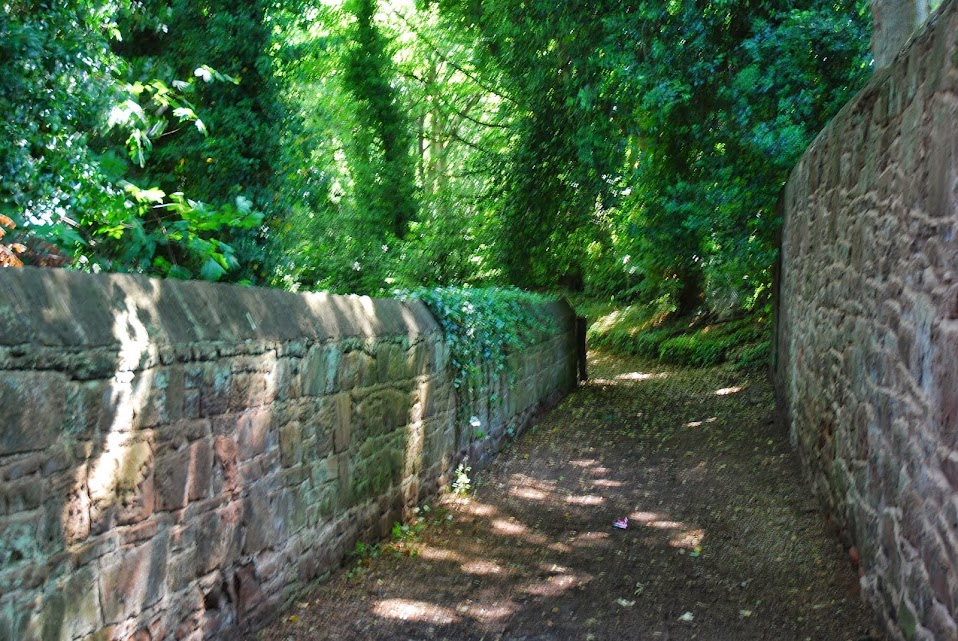 Caldy Hill is only a few hundred yards from Malcolm Lowry’s childhood home, Inglewood.  The author of Under The Volcano was born in New Brighton, but moved to Inglewood at Caldy when he was two.  His letters contain references to walks around here – the ‘ripping scenery’ and ‘secluded spots’ for romance:

‘I would meet you on the moor, and you would be looking sweeter than ever: you would rate me sardonically-playfully for ill treating the dog, and the dog would look at me so adoringly that you couldn’t help but believe that here was the true master.’

‘If you look at his novels, his writing, his letters, they’re all permeated with mentions of Wirral, Liverpool, the river…If you look at some of his writings, his love of nature began on the Wirral. Where he lived in Caldy he was surrounded by wonderful places where you could walk, and he describes walking over the gorse – in those days it was wilder, the Wirral was a much more rural paradise than it is now. Hilbre Island, the lighthouse, Dee estuary and marine lake – all are images that Lowry purposefully inserted into his work. 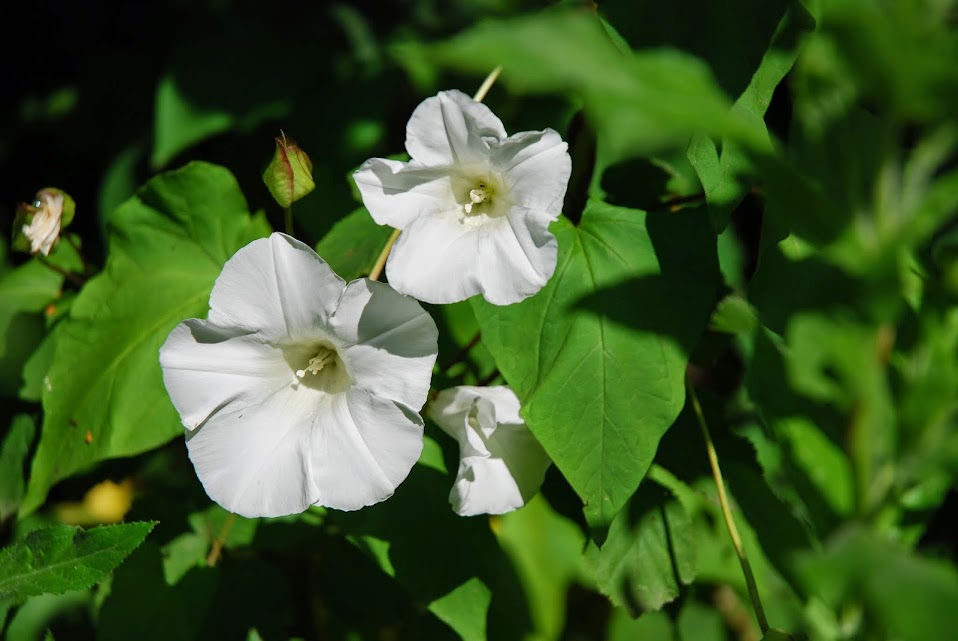 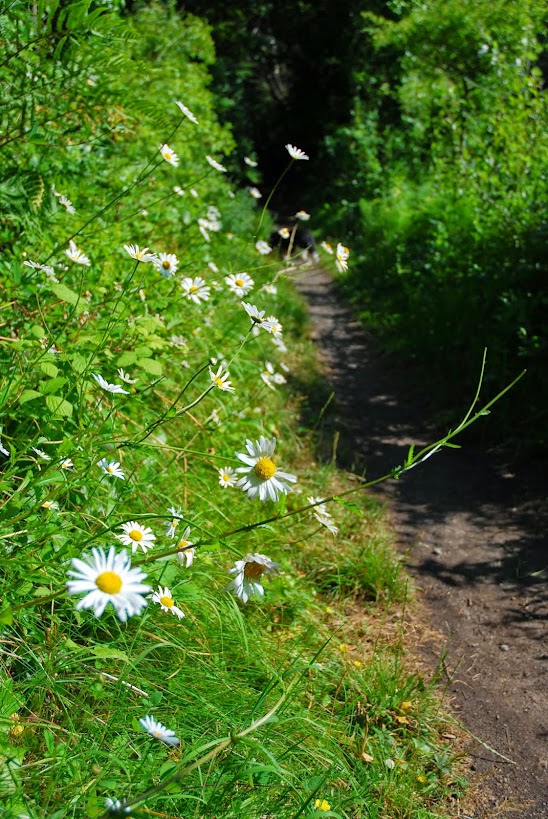 From the Wirral Way, a short walk across open grassland brings you to the Dee shore, with views of Hilbre and the Welsh coast. 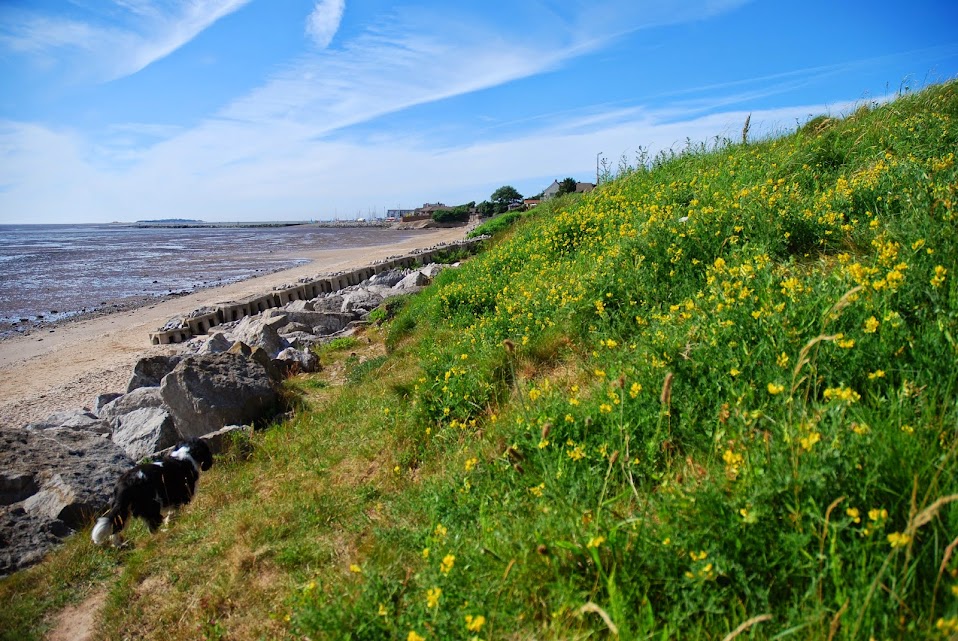 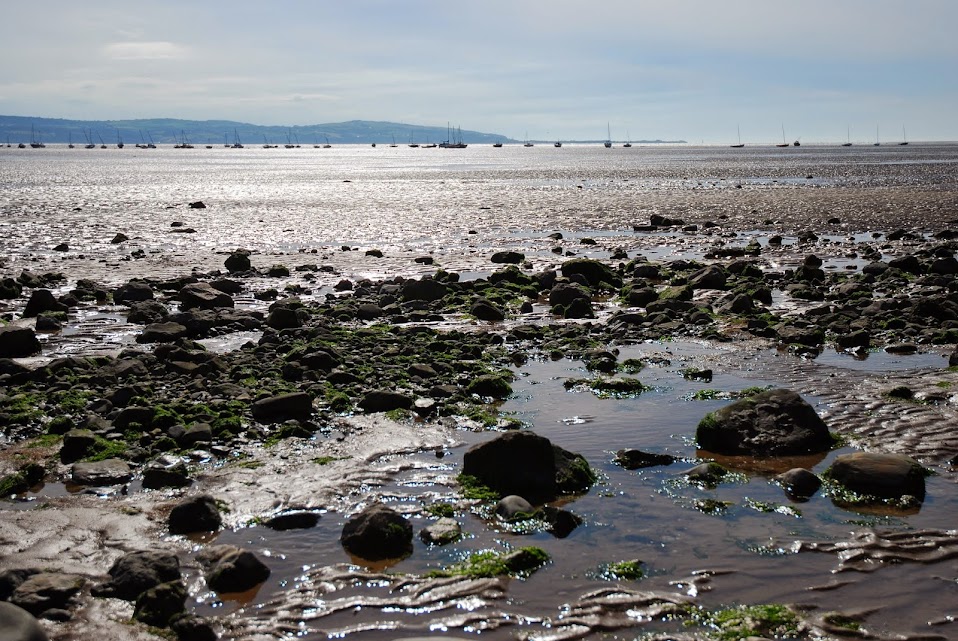 The shore at Caldy is a major feeding area for birds such as Shelduck, Oystercatchers, Knot and Dunlin which congregate at the mussel beds called the Caldy Blacks.  July and August is apparently the time to observe Terns which pass Hilbre Island in a steady stream. At low tide seals can be seen basking on West Hoyle Bank to the west of Hilbre Island – often as many as 400 in August. 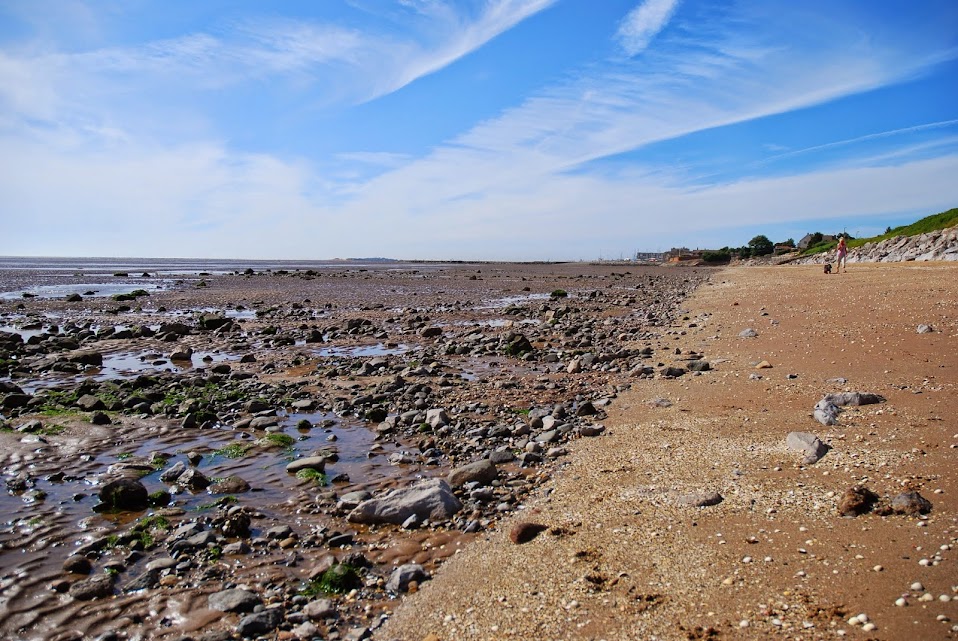 Almost any kind of seabird can turn up along this shore during migration – such as Skuas, Gannets, Manx Shearwaters and Kittiwake. There are always Divers, Grebes, Oystercatchers and sea ducks to be observed, particularly around Hilbre Island. 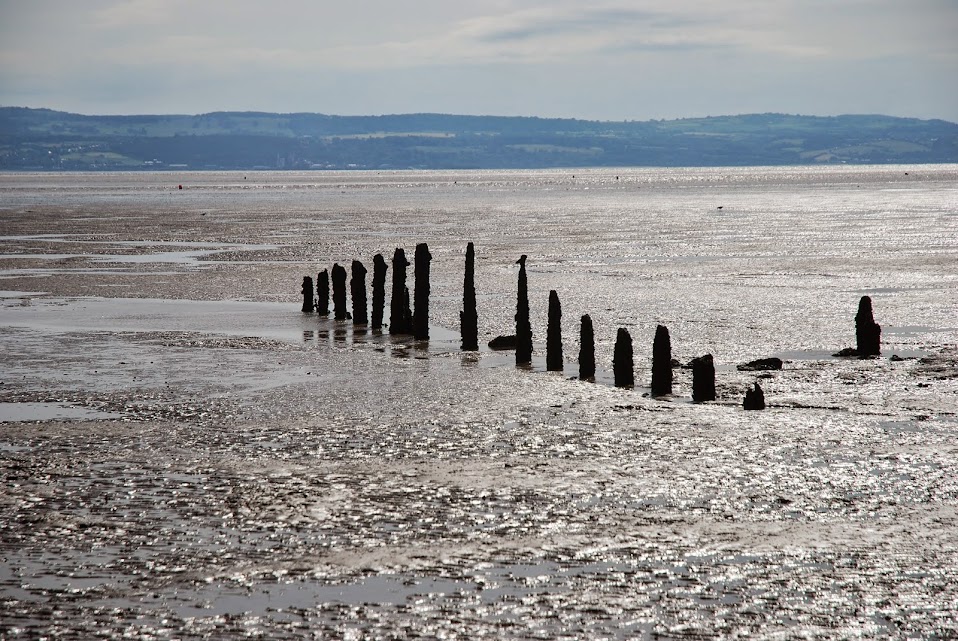 At the breakwater I turned from the shore and climbed the steps to Croft Drive to return to the village and the parked car. 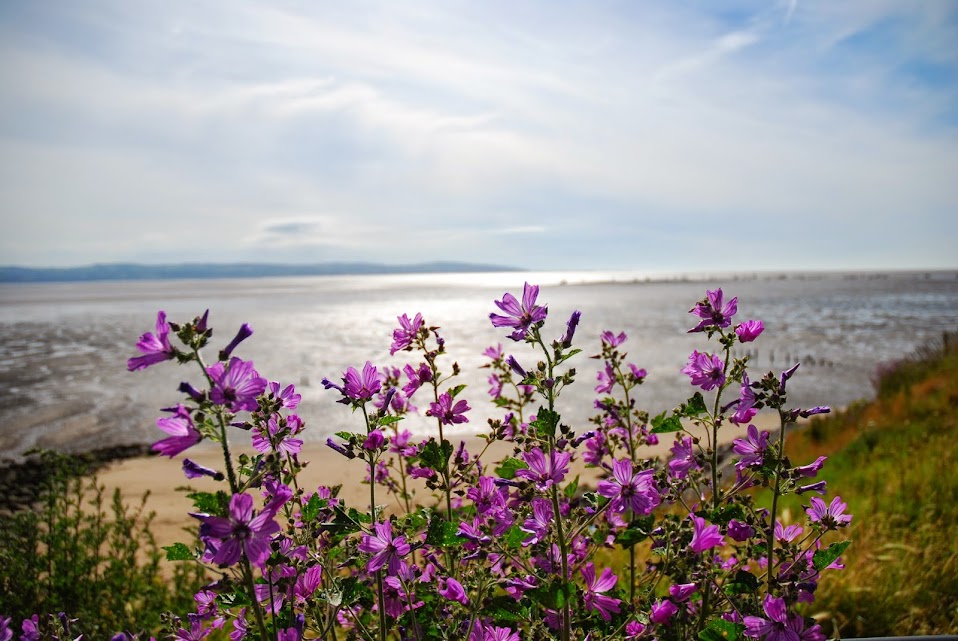 7 thoughts on “A walk around Caldy Hill”