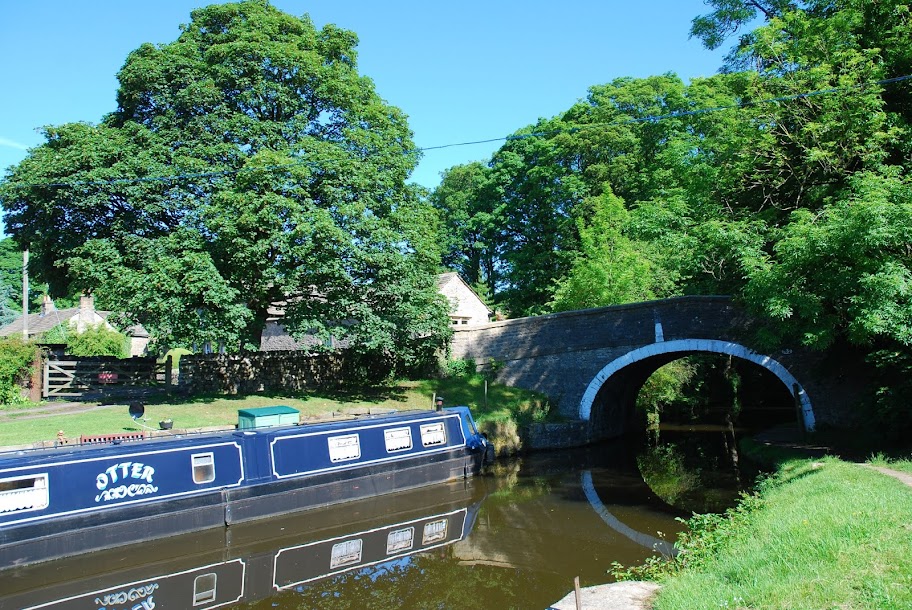 It was hot already at ten in the morning when I set off from the little village of East Marton on the most beautiful leg of the canal walk so far.  This stretch was an amble through an outstanding landscape with fine views across rolling fields and hillocks to distant rugged hills. 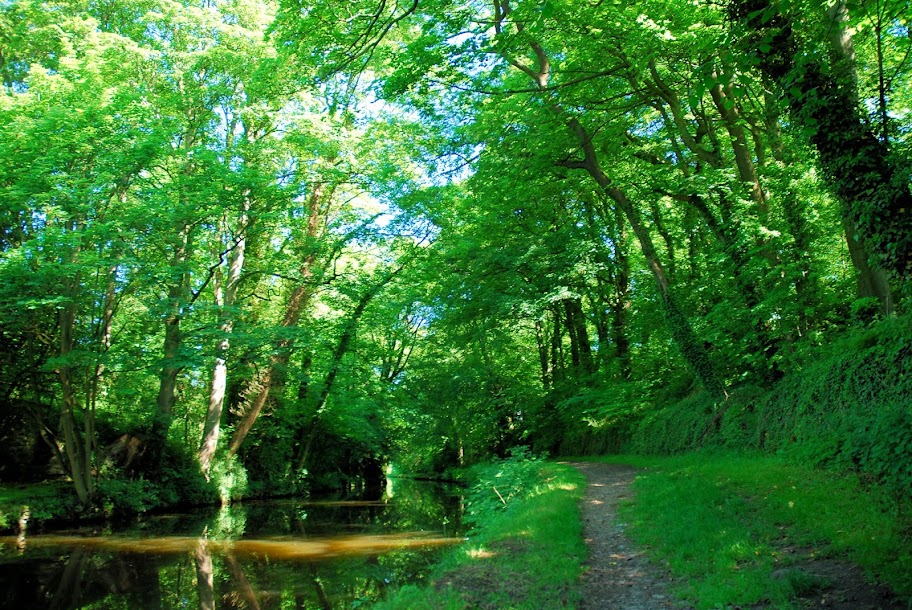 East Marton comprises a picturesque cluster of buildings, with pub, restaurant and an extensive stables and livery yard where horses were being exercised and groomed. The first stretch is green and tranquil as the canal pushes through a heavily-wooded cutting. 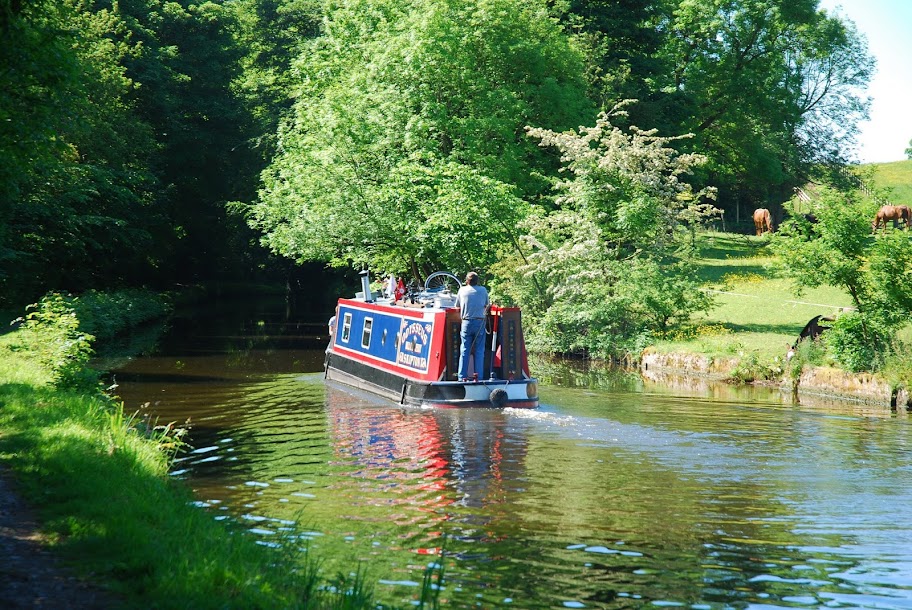 This stretch of the towpath actually forms a section of the Pennine Way.  It must come as a relief to those walking that toughest of long-distance paths. 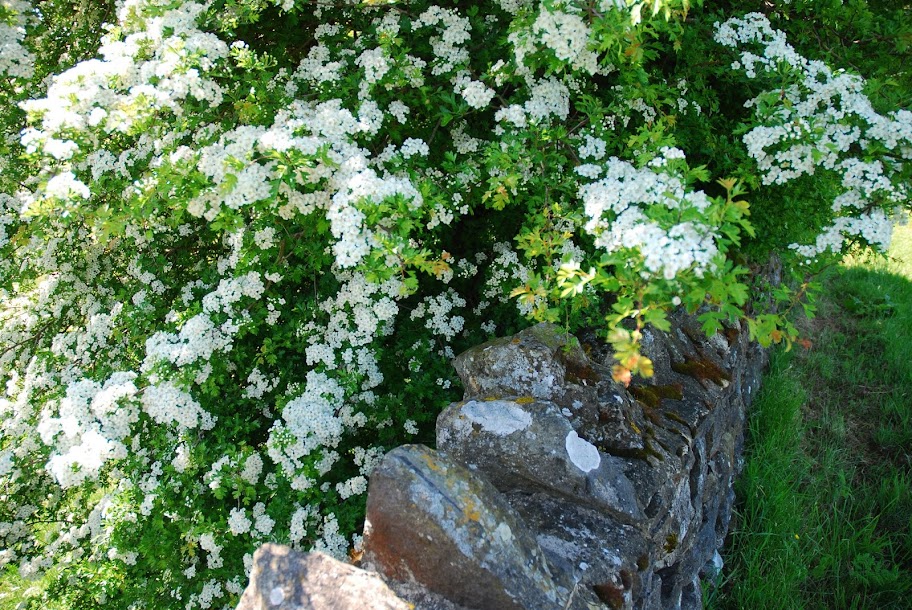 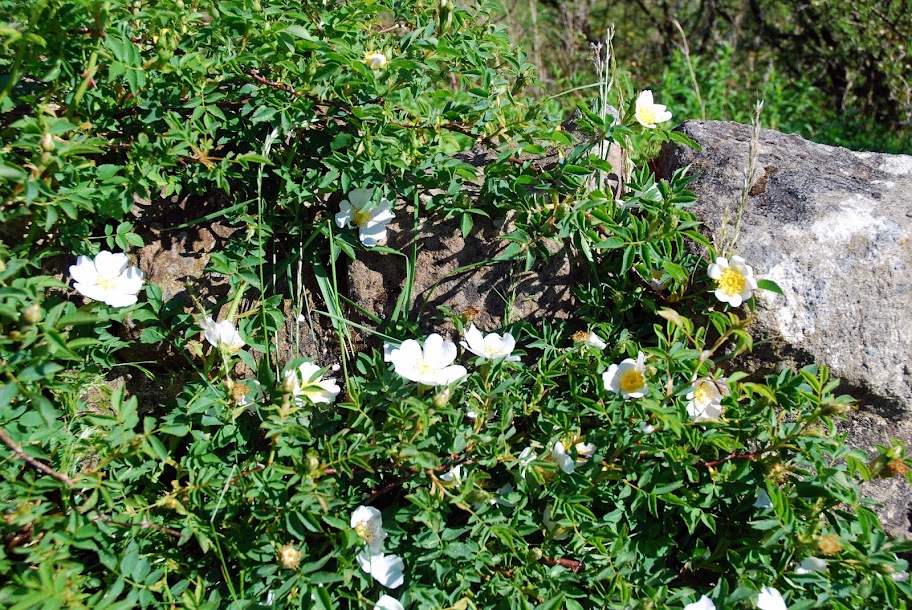 I was noting how, even in the two weeks since my last canal walk, the flowers have changed: though the hawthorn is still ubiquitous, now the dog-rose, yellow flag and birdsfoot trefoil are making their presence felt. 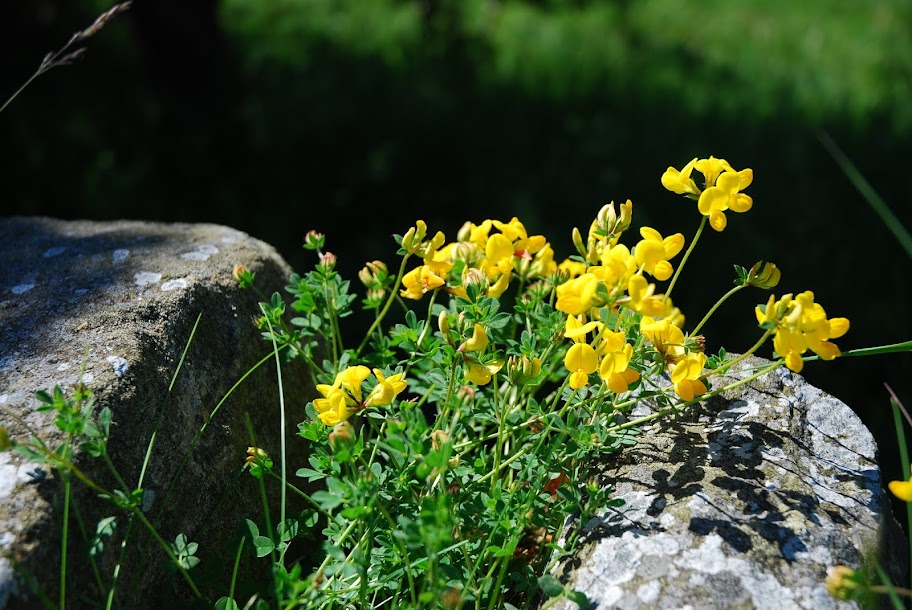 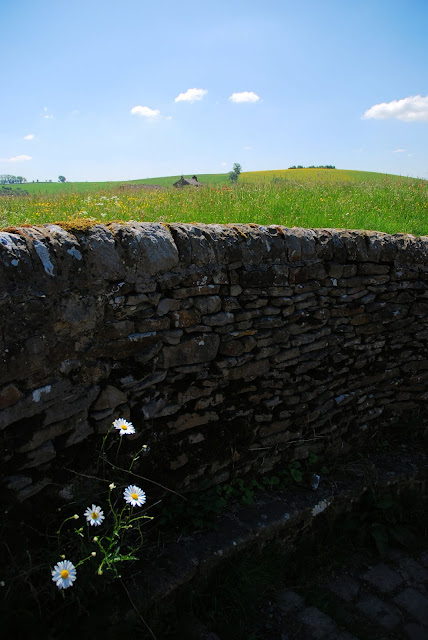 Heading towards Gargrave, the canal winds in extravagent loops through humpy hills smothered in buttercups (those drumlins again). 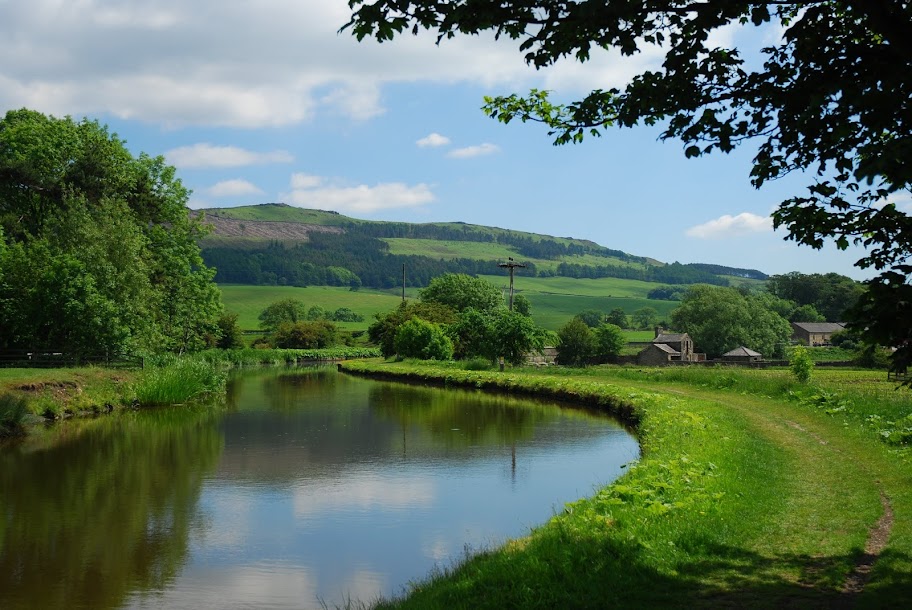 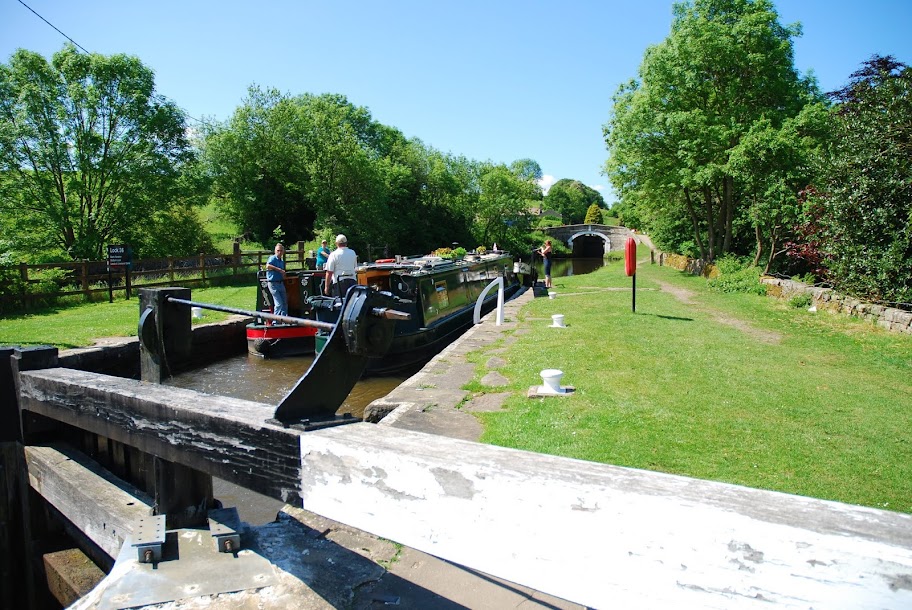 At Bank Newton, six locks lower the canal into Upper Airedale. This was once an  important base for canal maintenance to keep this particular length of the canal in full working order, with carpenter’s workshops and other buildings that are now converted into houses.

The first part of the Leeds-Liverpool canal to open was the lock-free section from Skipton to Bingley, in 1773. The datestone on the lock-keeper’s cottage indicates that the canal reached here 18 years later. 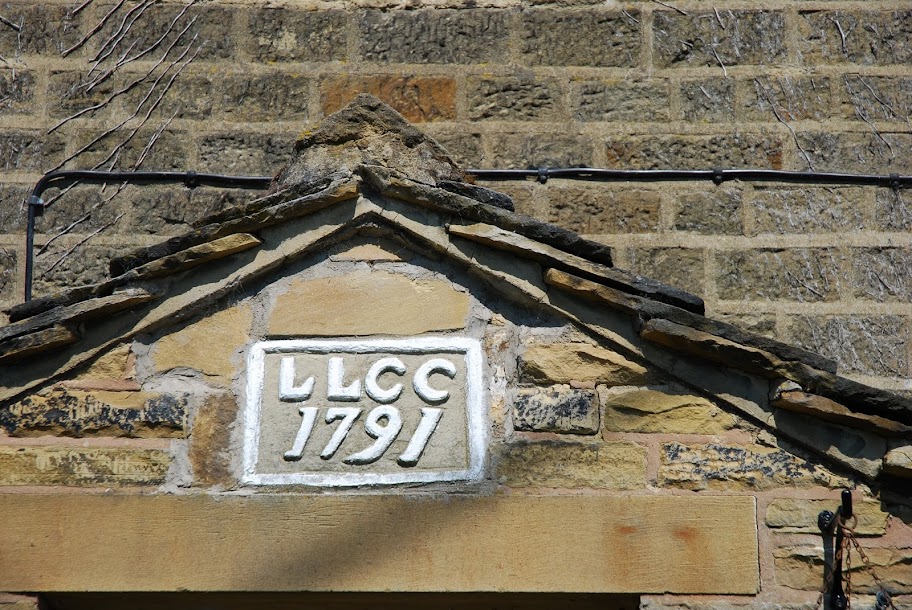 Close to the village of Gargrave an aqueduct carries the canal over the river Aire, flowing in from the north.  From here, the canal will follow the Aire valley down to Leeds, accompanied by the railway line from Carlisle and Settle. 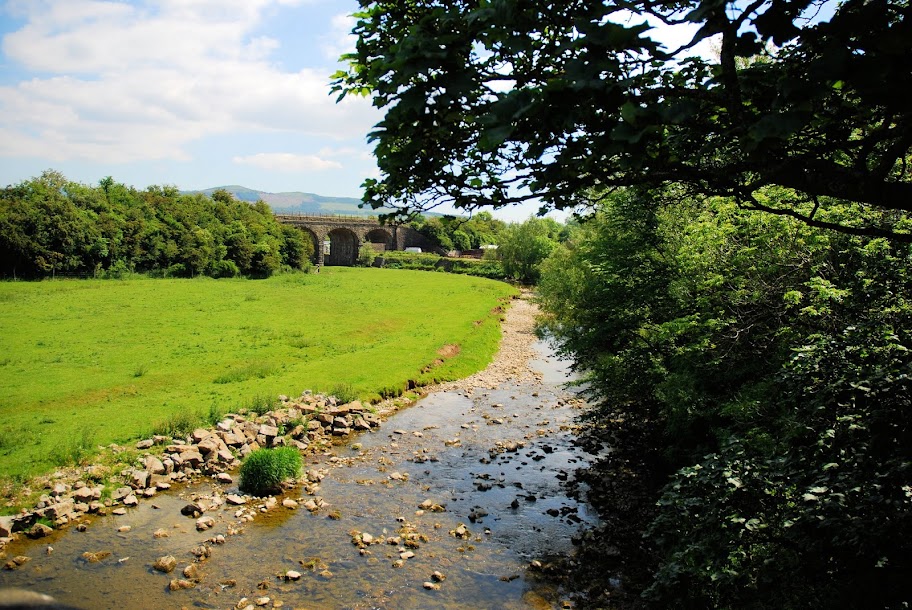 At Gargrave, the Pennine Way leaves the canal to head north towards Malham.  Here the canal enters the Yorkshire dales National Park. 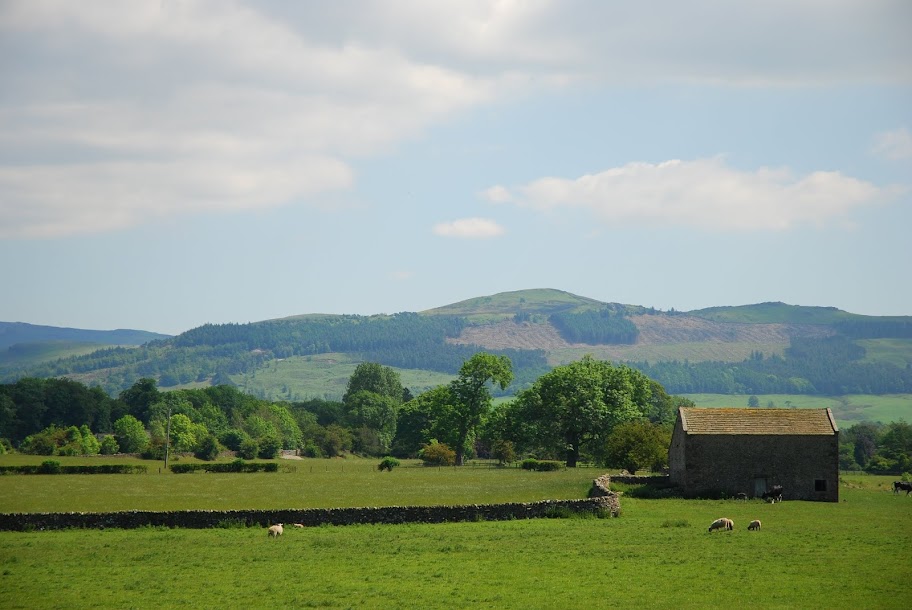 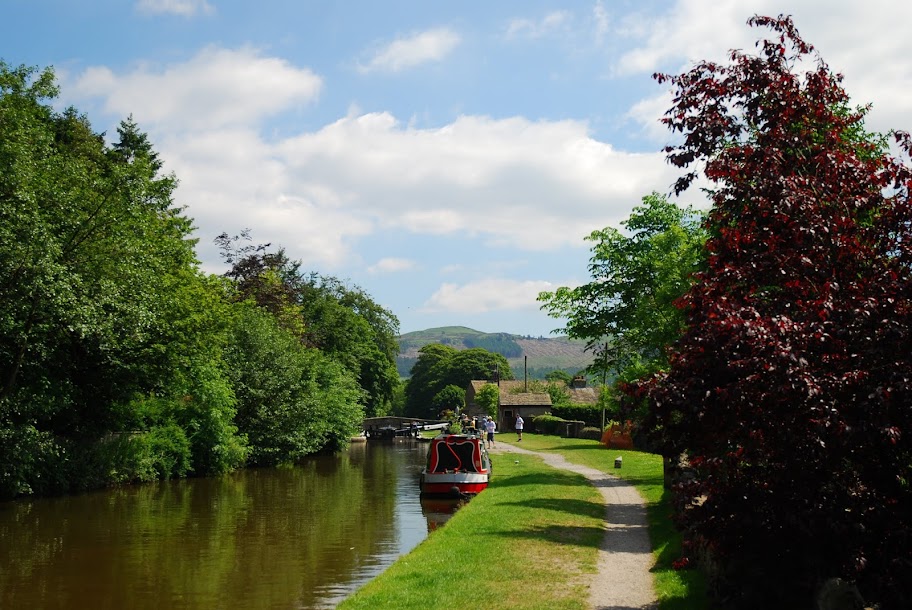 There is an interesting account of the impact that the canal had on this part of the world on Out of Oblivion, a website that documents change in the cultural landscape of the Yorkshire Dales:

In the 1760s, Yorkshire merchants were keen to improve the supply of limestone from the Craven Dales to the farmland and towns of the West Riding. The limestone, once burnt and turned into lime was needed to improve yields from marginal agricultural land while the mortar produced from the same source went to build taller weaving sheds and houses for mill workers. They conceived the idea of building a canal from Leeds, up the Aire valley, to Gargrave. They also saw the possibilities of extending the canal to Liverpool in order to take advantage of the trade in textiles to the growing colonial markets in Africa and America…

The effect on the southern Dales of the arrival of the canal at Gargrave can not be overestimated. Although limestone was intended to have been the canal’s major traffic it turned out to be coal instead. Up until then coal for domestic and industrial use in the Dales had come from often remote collieries such as those above Threshfield or on Tan Hill. The state of the roads and the difficulty accessing many of these collieries meant that packhorses and to a lesser extent wheeled vehicles had been the only method of transporting it. Added to that, local coal was shaley and poor quality. The Leeds-Liverpool canal offered a viable alternative by being able to transport bulk materials over distance at a low cost. Better quality coal at cheaper prices was delivered to warehouses in Gargrave and from there the coal was collected by carriers who delivered it throughout Wharfedale and beyond. The Cupola smelt mill on Grassington Moor was now assured of a regular supply of good quality fuel. Domestic users had an alternative to collecting wood or cutting and drying peat. During much of the nineteenth century over one million tons of coal a year was transported on the canal. This contrasted with around 50,000 tons of limestone per year.

The Leeds & Liverpool Canal was an efficient carrier of both bulk raw materials and merchandise such as groceries, beer and machinery. It continued to compete successfully along its length with railways until road transport began to take off after the First World War. Coal remained the main cargo, but as factories began to turn from steam power to electricity demand for it fell away until finally in 1972 the last regular commercial traffic ceased. 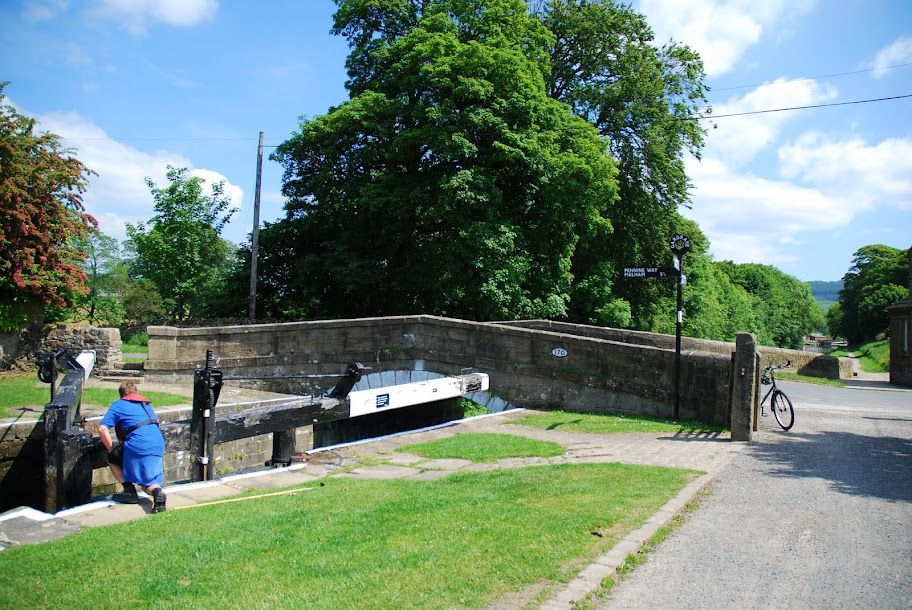 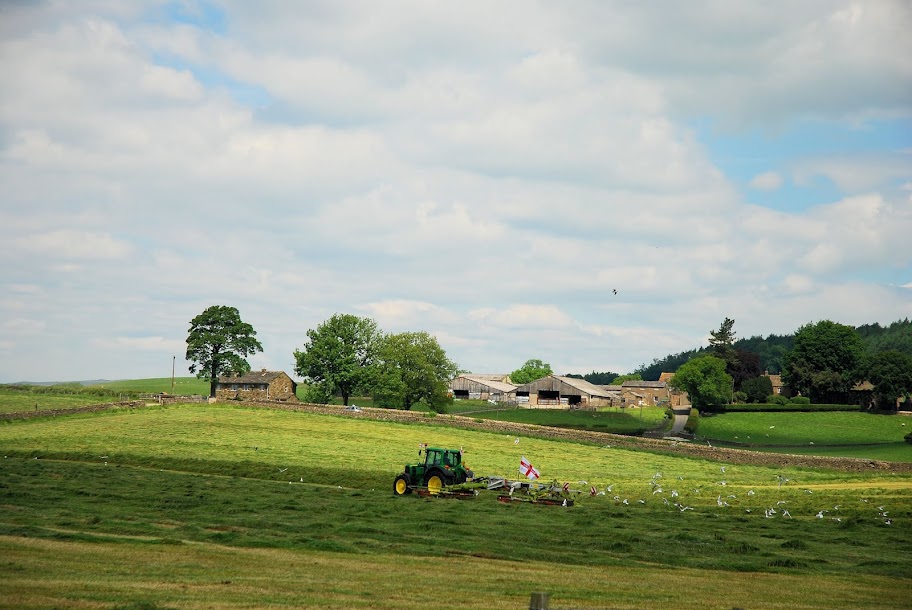 Approaching Skipton,in the meadows beside the canal, hay had been cut and this was attracting a great many birds.  A heron flew up just in front of me, and curlews were noisily investigating the mounds of cut grass. I was surprised to see a pair of oystercatchers so far inland. In the hot midday sun, martins swooped to catch insects over the canal’s still water.

Although the canal had been busy with barges, I had encountered hardly a soul on the towpath.  It was quite a shock, then, to arrive in Skipton which was heaving and bustling with day-trippers, a goodly proportion of whom were decidedly elderly. 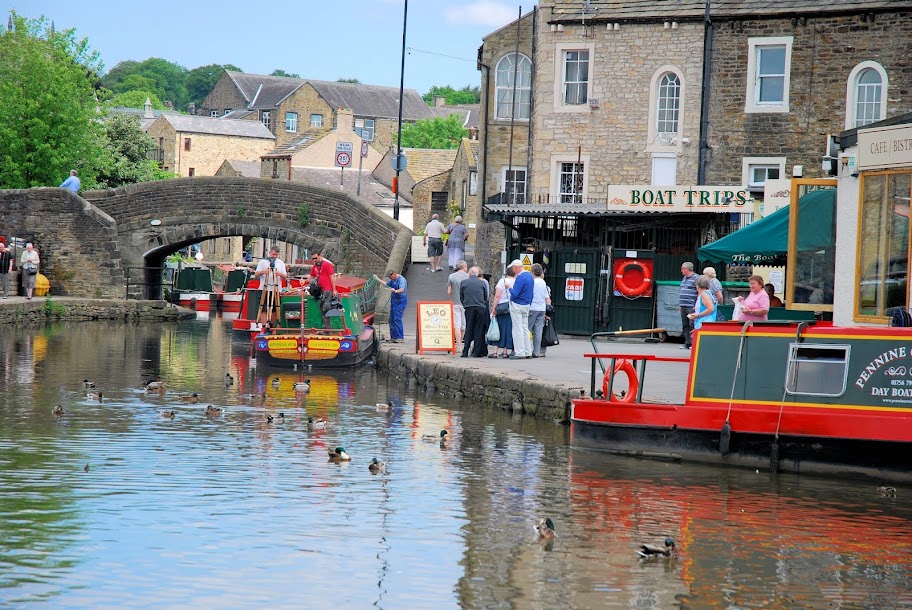 Skipton is a very pleasant little town.  The area around the canal basin appears to have been constructed all of a piece around the time that the canal arrived in 1773 .  This gives the buildings, bridges and embankments a pleasing homegeneity, constructed largely from glowing yorkshire stone. The Leeds Intelligencer reported on 8 April 1773:

“On Thursday last, that part of the Grand Canal from Bingley to Skipton was opened, and two boats laden with coals arrived at the last mentioned place, which were sold at half the price they have hitherto given for that most necessary convenience of life, which is a recent instance, among other, of the great use of canals in general. On which occasion the bells were set ringing at Skipton; there were also bonfires, illuminations, and other demonstrations of joy.” 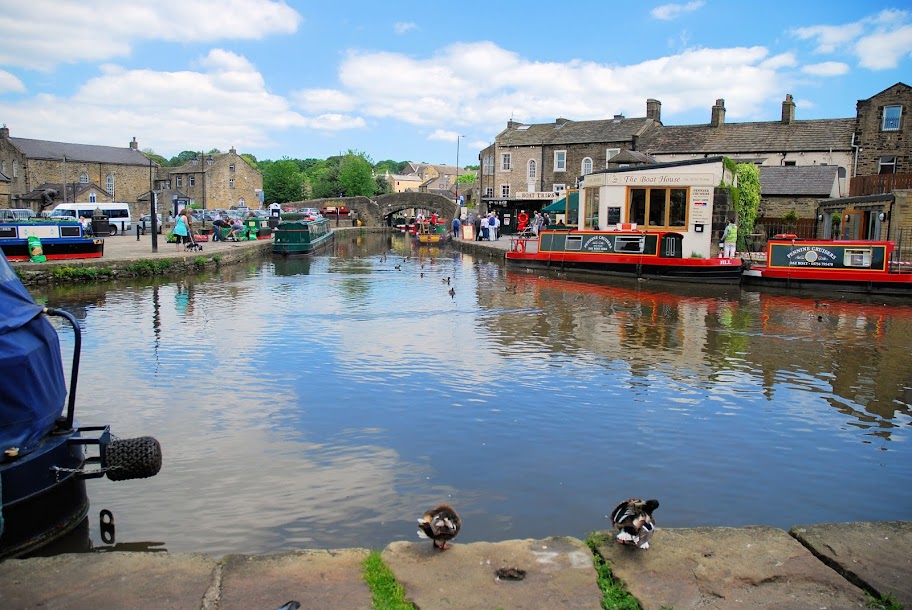 The Springs Branch is a short section that branches off from the main canal to enter a wooded ravine bounded by an escarpment surmounted by Skipton Castle. 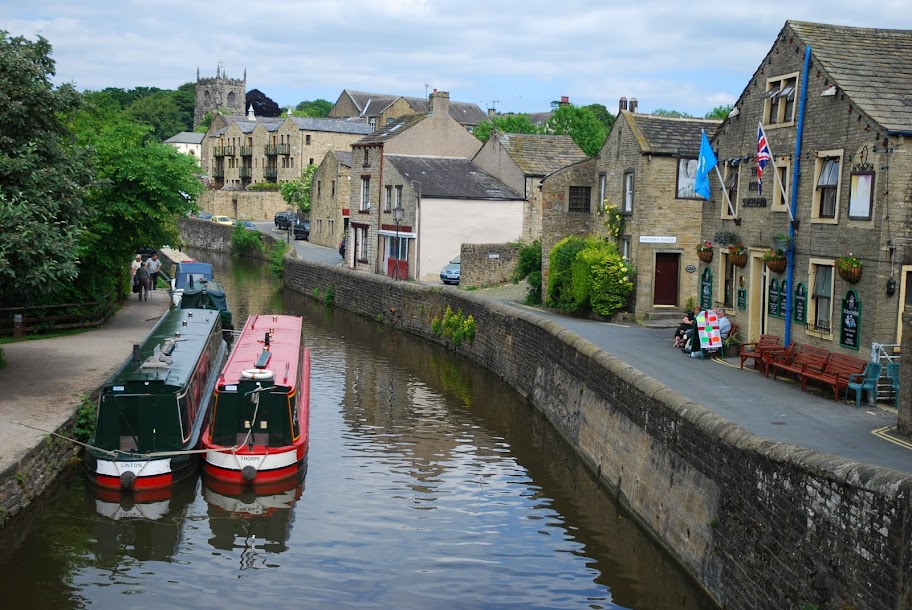 Lord Thanet in Skipton owned both Skipton Castle and local limestone quarries. He proposed the construction of a quarter mile branch canal to connect the quarries with the new Leeds Liverpool Canal. An Act was passed in 1773 to enable construction to go ahead and the branch canal was built quickly.

Skipton has a long history, with its name deriving from the Saxon word for sheep and meaning ‘sheep town’. Settled by sheep farmers as long ago as the 7th century, the town has an entry in the Domesday Book, and Skipton Castle was built around 1090 by Robert de Romille, who came over from Normandy with William I in 1066. But it was the arrival of the Leeds-Liverpool canal that boosted the town’s fortunes and Skipton boomed during the Industrial Revolution, with cloth making becoming the major activity.

I walked up Springs Branch, past the waterfall where Eller beck cascades into the canal, to the rock face where the canal branch ends abruptly.  This is where the limestone was once quarried. 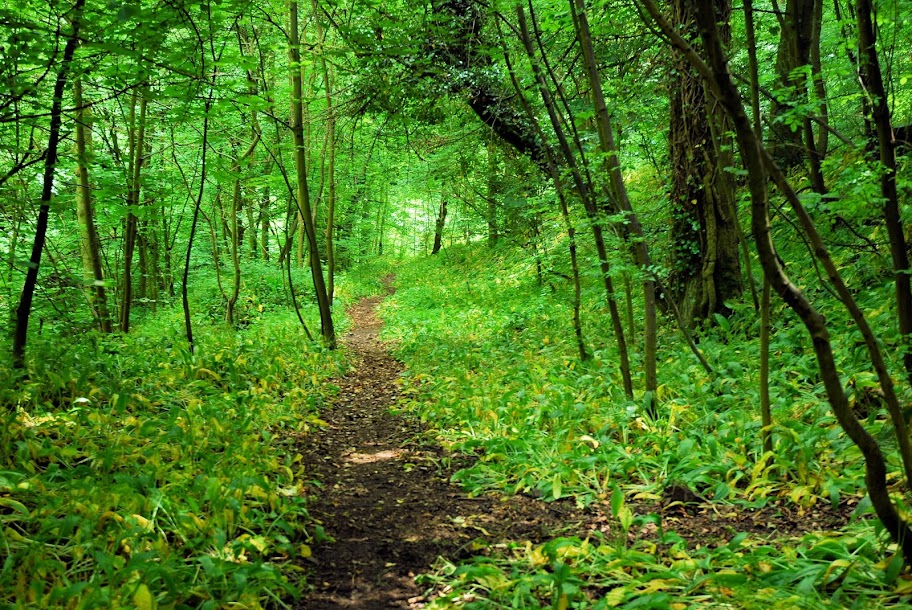 Continuing beyond the canal branch, a path takes you into Skipton Woods. I should have been here a few weeks ago: everywhere I looked, as far as the eye could see, the woodland floor was thick with wild garlic, but the recent blossoms were faded and gone.  The wood is managed by the Woodland Trust, which states on their website:

A magical land in the heart of town – that’s one way to describe Skipton Woods, a woodland haven by one of Britain’s best preserved, most popular medieval castles. The wood’s links with the castle date back at least 1,000 years.  Most of this ancient woodland is dominated by ash but the occasional sycamore, beech, Scots pine, Norway spruce and hornbeam indicate a greater variety in the past. The woods are renowned for their vivid displays of bluebells and wild garlic and sustain five species of bat. Green and greater spotted woodpeckers add their colour, while kingfisher and heron may be seen fishing the waterways.

The woods were originally used by Skipton Castle primarily for hunting and fishing, although during the 18th and 19th centuries, the woods were also used to provide timber, building stone and water. The timber and stone was moved out of the woods via Springs Canal. The water was obtained by damming Eller Beck to form Long Dam, which in turn fed a small reservoir called Round Dam, also known as Mill Dam or Mill Pond. The water was used to power the former sawmill and corn mill located by the castle. Public access to the woods was only allowed by the owners of the castle in 1971.

Someone was here at the beginning of May this year and made a video of it:

By the canal basin there’s a striking statue of the Yorkshire fast bowler, Fred Trueman, that was unveiled a few months back. It was created by Yorkshire sculptor Graham Ibbeson, from a studio in his back garden in Barnsley, with the blessing of Trueman’s widow Veronica. Trueman made his Yorkshire first-class debut in 1949 and went on to play 459 games for the county, notching up 1,745 wickets. In 67 Test matches for England he took 307 wickets, and retired in 1972 for a career in the media. He died in 2006, aged 75.  The Truemans made the Yorkshire Dales their home in the 1970s, although Fred himself was born in Stainton, a village between Rotherham and Doncaster. 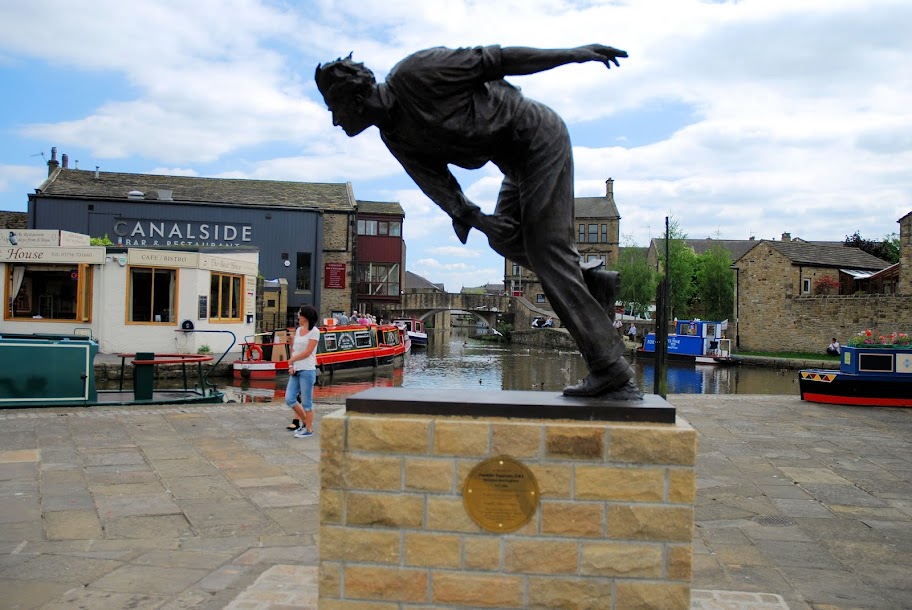 I walked to the outskirts of Skipton, before turning back to catch the X80 bus that would drop me back in East Marton. I am now over 100 miles from Liverpool.

Next: Skipton to Saltaire

3 thoughts on “Walking the canal: East Marton to Skipton”