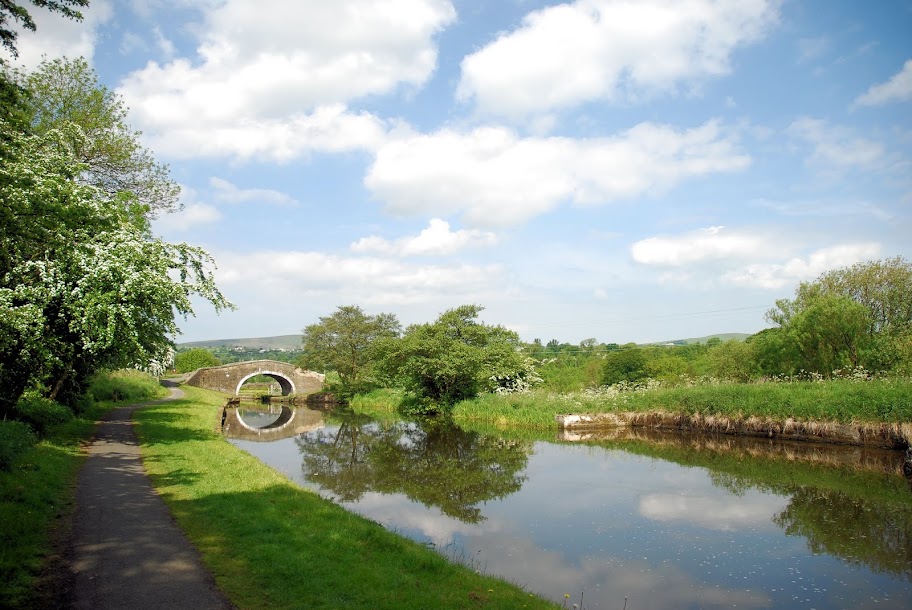 I set off from bridge 141D at Nelson on a bright sunny morning and the temperature rose steadily as the day progressed. The countryside was smothered in buttercups and hawthorn: has the blossom been particularly striking this year, after the hard winter and cold spring? 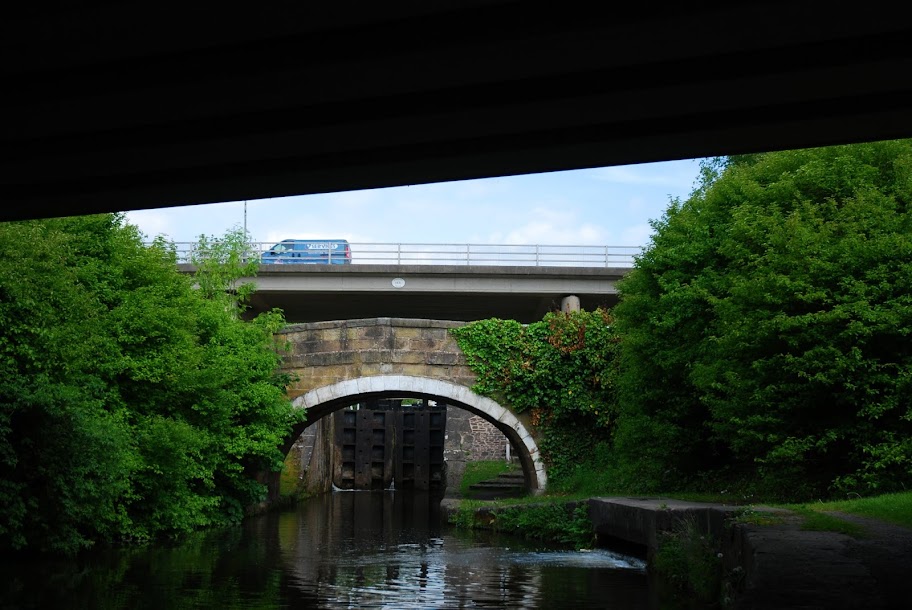 A couple of miles further on the M65 motorway bridge piggybacks over the original 19th century canal bridge. Then, with Pendle Hill’s distinctive form to the north, it’s into beautiful Pennine countryside, heading towards the pretty Barrowford locks. 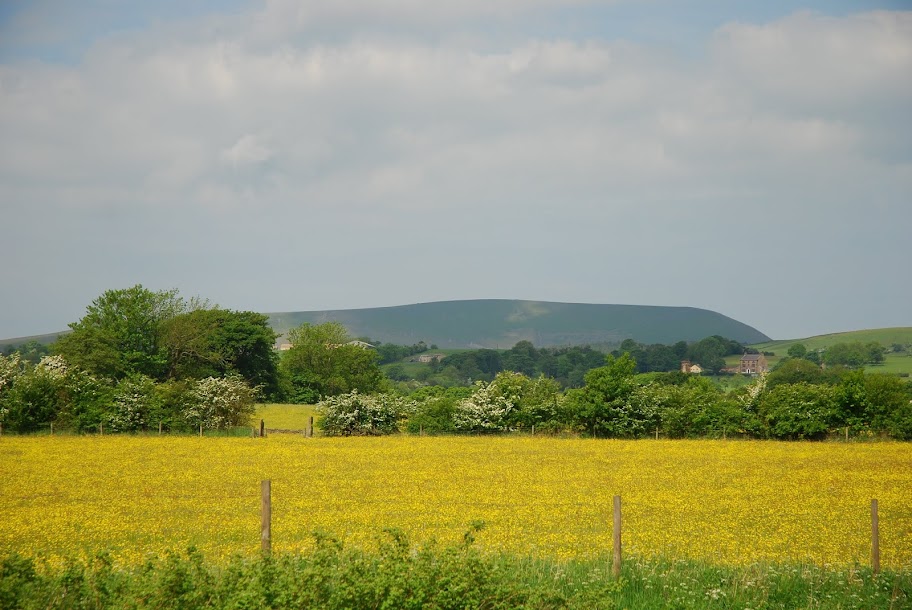 At the bottom lock, work was being carried out to repair damage to the lock floor which had caused an escape of water.  The lock was completely drained and further up, above the top lock, there was a considerable tailback of narrowboats, held up by the stoppage which, chatting with one of the navigators, I discovered had lasted several days.  He didn’t seem to mind – being parked up in beautiful countryside with good weather to boot! 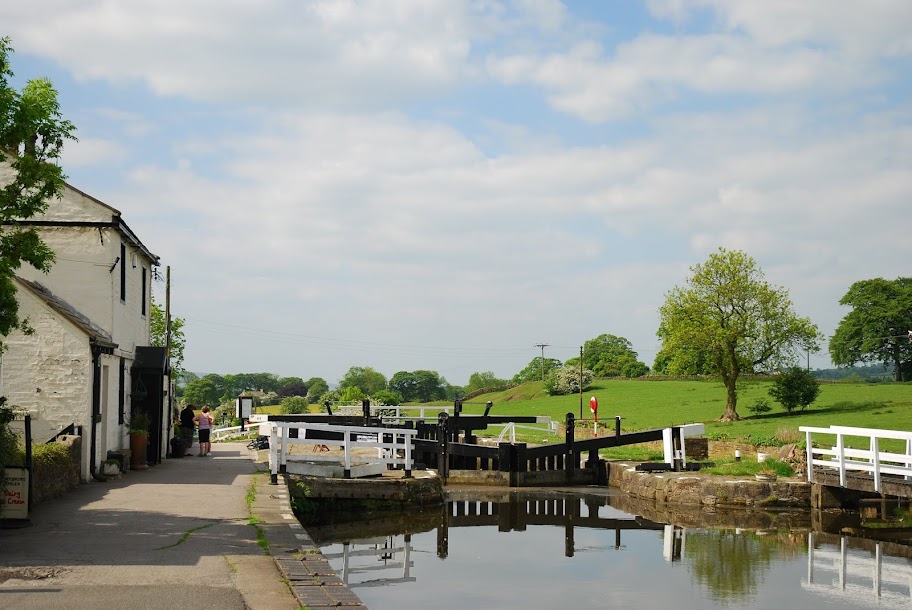 Barrowford locks and lock-keeper’s cottage form a very pretty complex, and the lock-keeper enterprisingly sells second-hand books and local ice cream. A little further on, the canal passes Barrowford Reservoir, in which surplus water is stored. 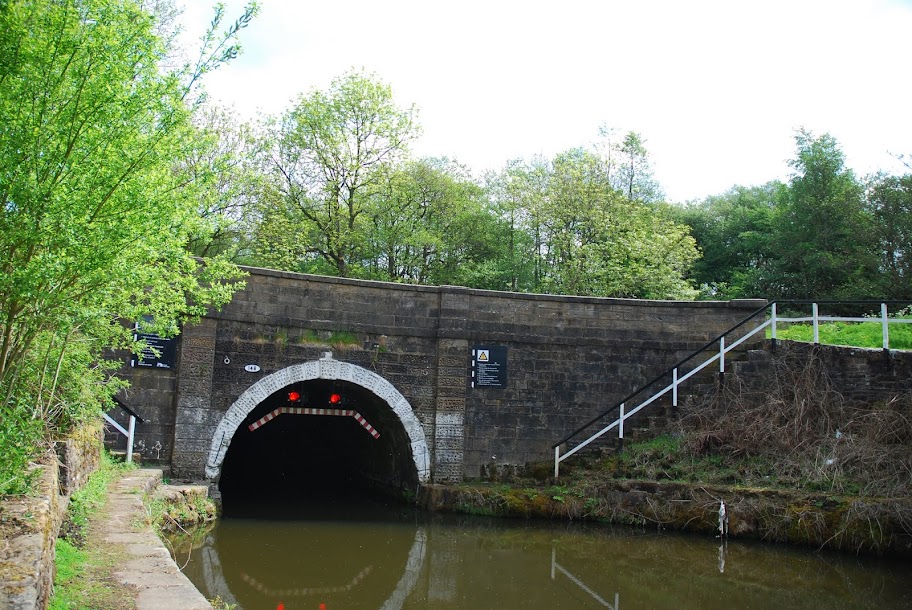 Another mile brings you to the entrance to the Foulridge tunnel, which is  just under a mile long.  It opened in 1796, after five years of excavations. Because the tunnel is so long and there is no towpath for a horse to pull the barges through, between 1880 and 1937 a steam boat tugged barges through. Before 1880 men would ‘leg it’ through the tunnel, lying on their backs and pushing the barge through by walking along the ceiling of the tunnel.  In the Hole-in-the-Corner pub, near the far entrance, is a picture of a cow named Buttercup that fell into the canal in 1912 and, instead of just wading out, decided to swim the entire length of the tunnel before being rescued. It is said she was taken to the pub and revived with a pint. 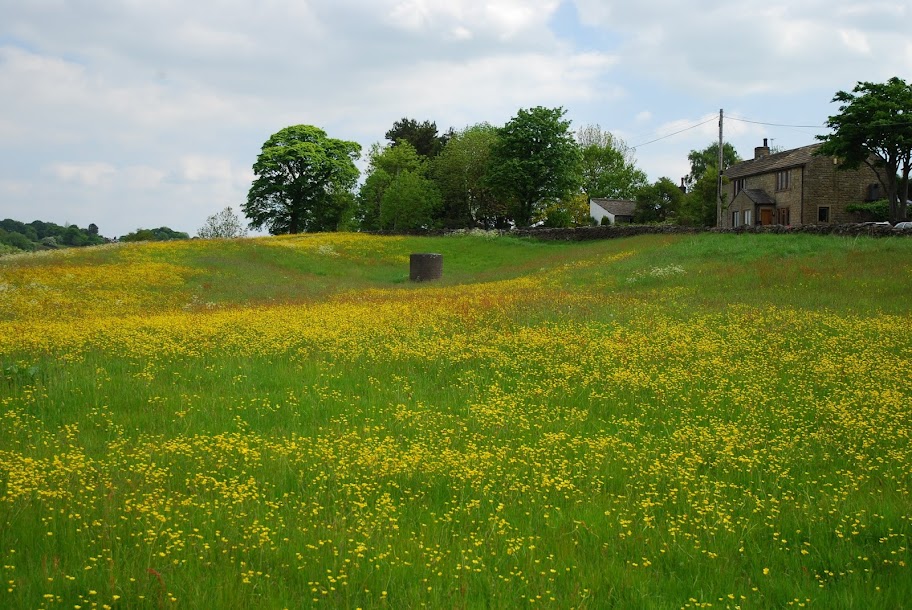 A little further on, I noticed a ventilation shaft for the tunnel in a field of buttercups.  Then the walker’s route skirts the large reservoir that feeds the canal before eventually bringing you into the village of Foulridge. Although just a small village, Foulridge was to become an important centre on the canal, as it was here that the water supply was organised. Water came not just from reservoirs, but also from streams feeding into the summit level. By  1879,  around 90 boats were passing through the tunnel each week, and the leggers were replaced by the steam tug in 1882. But by 1930 there were only 13 boats using the tug each week and the service ended  in 1934. 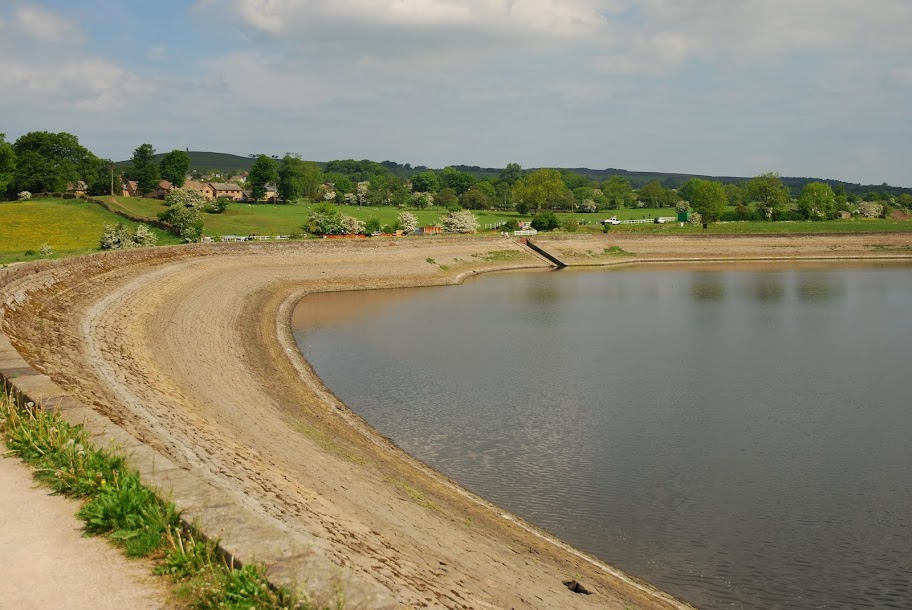 When I was looking at the today’s route I imagined that Foulridge had gained its name from being some desolate, windswept Pennine crag. Not so: the fine countryside here is far from bleak, and the place-name has a totally different etymology.  It’s actually pronounced ‘foalridge’, and derives from the Anglo-Saxon words for ‘foal’ and ‘ridge’, suggesting that this was a renowned horse-rearing area in those days.

Foulridge Wharf was built in 1815 to bring American cotton, limestone and coal to Colne. Now it has a pleasant cafe and is a stopping off place for those travelling the canal. 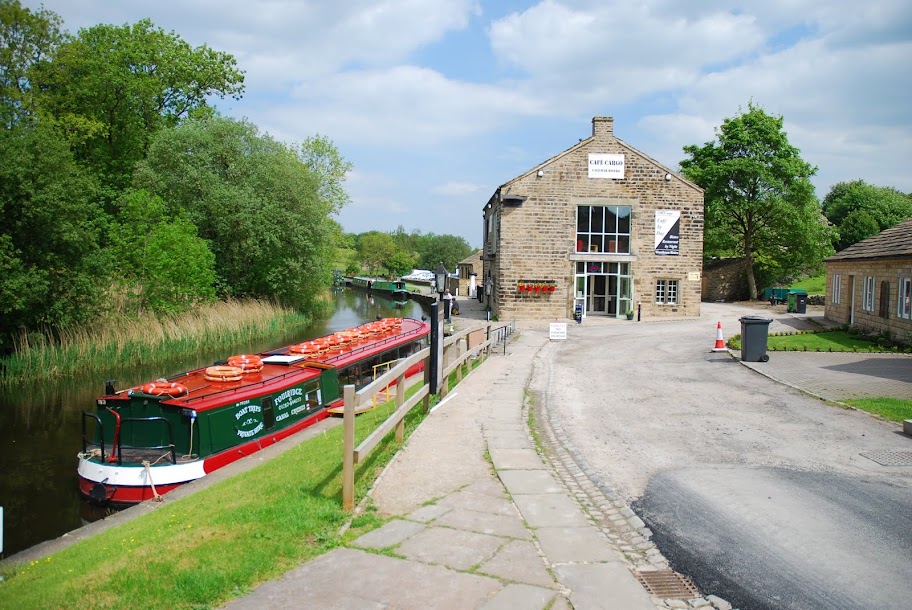 From here I walked on another mile or so before taking a break for lunch and a pint at the Anchor Inn, near Salterford. This canalside pub is unusual because when the road and bridge were built outside, another storey had to be built on, so the original upstairs of the old pub is now the present pub, the original pub is now the cellar and it has a second cellar, which has stalactites and stalagmites created as a result of water leaking through from the canal. 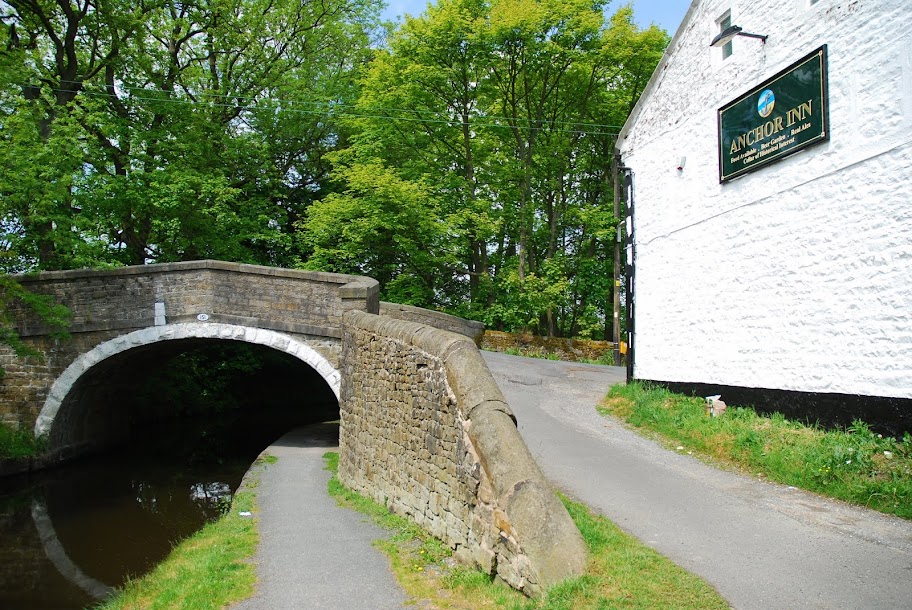 While I was having lunch in the beer garden, this chap was practising the old craft of dry-stone walling, repairing damage to the pub’s boundary wall. The roots of drystone walling as a method of enclosing fields lie at least as far back as the Iron Age.  Drystone walls are not merely features of agricultural interest; they are in a sense, living history; a legacy of the movement towards enclosure of common farming and grazing land. Most of the drystone walls we see today are products of the post-medieval move toward enclosure.  I sat and mused on how many tens of thousands of miles of dry stone walls there must be in the British Isles – and how many man-hours of labour went into their construction. 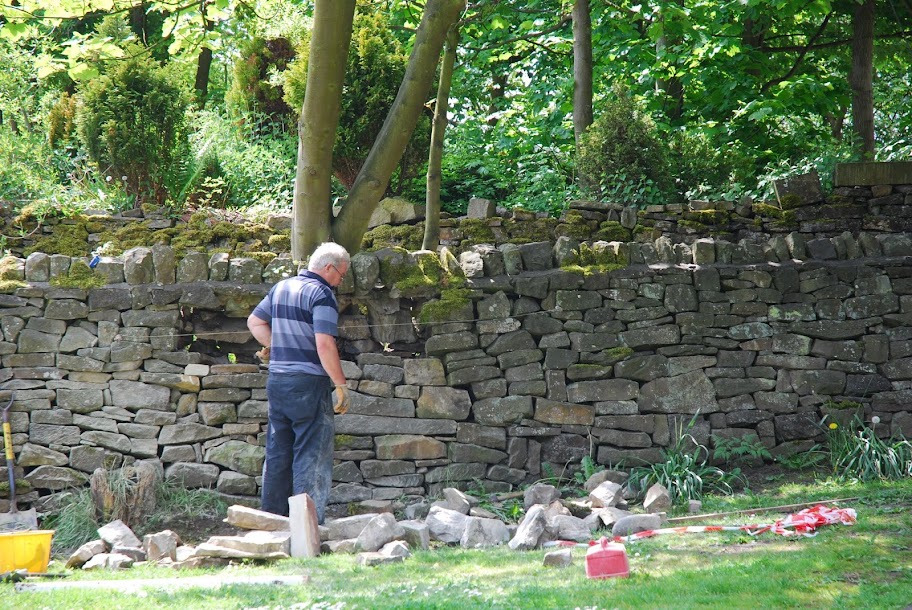 Just past the bridge at the pub are two of the few remaining tow line rollers along the UK canal network.  When the canal turned a sharp bend, as here, it was difficult for a horse-drawn boat to steer; and the tow rope would pull the boat into the bank instead of around the corner. To stop this  from  happening, vertical  rollers were fitted  to upright wooden posts, the tow rope passing across the rollers and keeping the pull on the boat such that it was not a problem for the boatman steering the boat.

Tow lines would rub against the bridge arch after the horse had passed underneath. This caused grooves tobe worn into the stonework. Vertical wooden rollers were fitted to most bridges to stop such wear. The iron bearings of the wooden roller guard irons often survive, though most of the rollers have disappeared. Here they have been renewed. 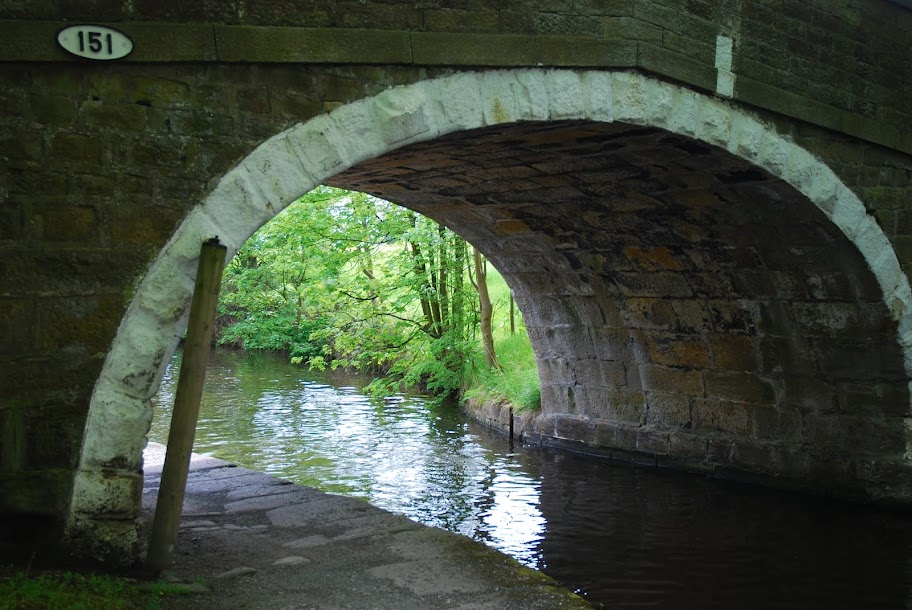 For the next  couple of miles the canal meanders along the outskirts of Barnoldswick, the highest town on the Leeds and Liverpool Canal. Barnoldswick remained a small village until the arrival of the canal, and later the (now closed) railway, spurred the development of the old woollen industry, and helped it to become a major cotton town. The engine of the last mill to be built in Barnoldswick, Bancroft Mill, has been preserved and is now open as a tourist attraction.

Today, Barnoldswick is home to Silentnight Beds, the UK’s largest manufacturer of beds and mattresses, and Rolls Royce.  The model number of many Rolls Royce jet engines start with the initials RB which stands for Rolls Barnoldswick. 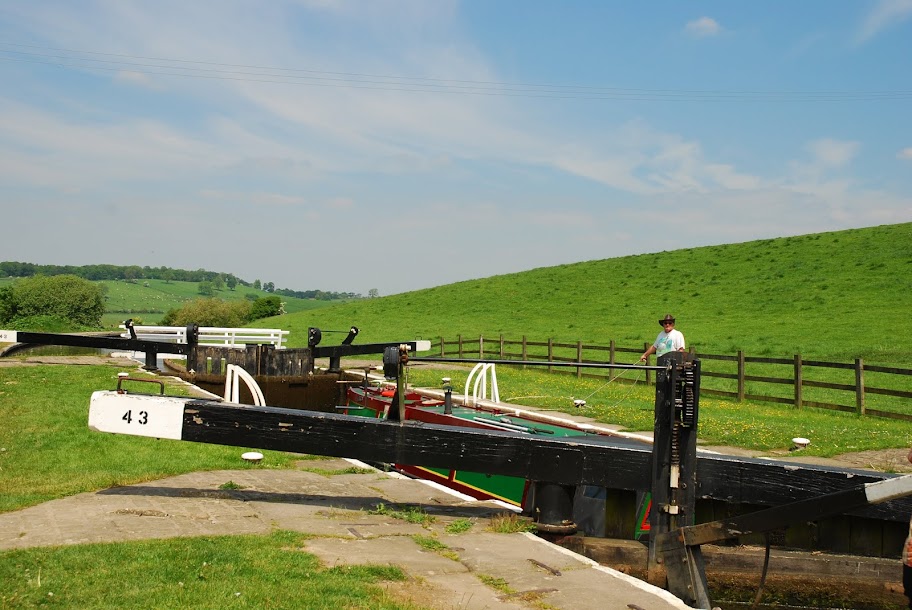 At the northern edge of the town, the Greenberfield locks, opened in 1794,  have been voted the best kept in the country. Greenberfield is the highest point on the canal. From here, it’s all downhill to Leeds!

The original function of the canal here was to carry limestone from several local quarries, one of which was located just above this lock. The quarry closed in the late-nineteenth century and was filled in.

As the afternoon wore on, we were all hotter and thirstier. Walking in a bucolic haze through a landscape of rounded hillocks often topped by clumps of trees (such as Copy Hill, above), all that industrial activity seemed long ago. 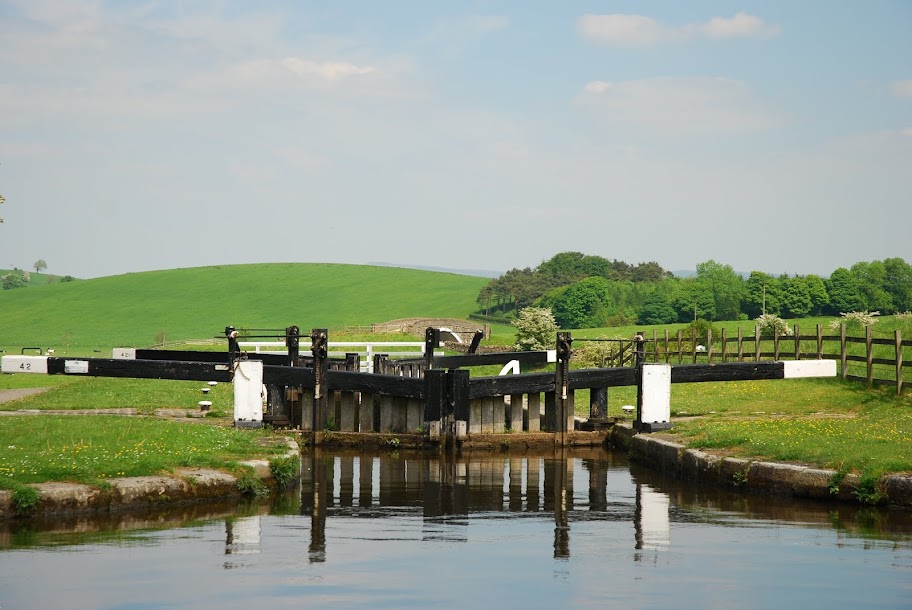 These rounded hillocks are drumlins, formed when melting glaciers deposited rock debris and then moulded the piles into theses oval hillocks characteristic of this part of the Yorkshire Dales. 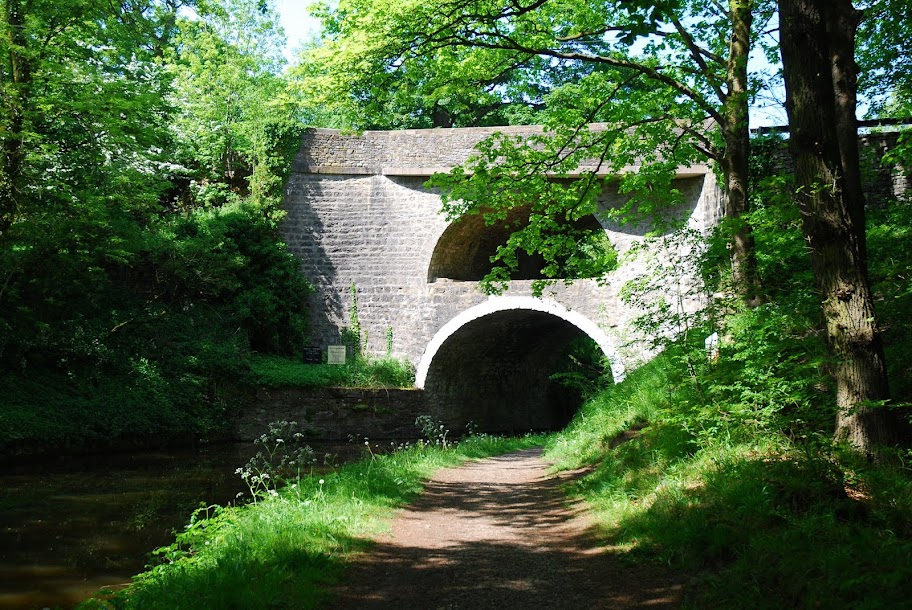 Finally, I arrived at the curious Double-Arched bridge at East Marton.  This odd-looking structure carries the busy A59 road over the canal. It would appear that after the original bridge was built the height of the road was raised to eliminate a dip, and as a consequence a second bridge was built on top of the first. And as I climbed steps to the road to catch the bus back to Nelson, there was the milestone – 38 miles to go! 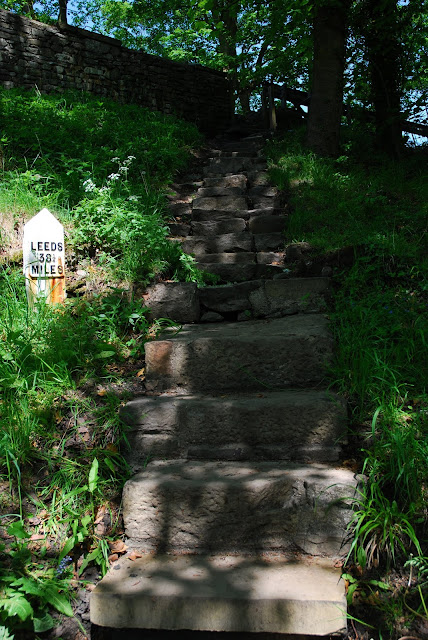 Next: East Marton to Skipton

2 thoughts on “Walking the Canal: Nelson to East Marton”