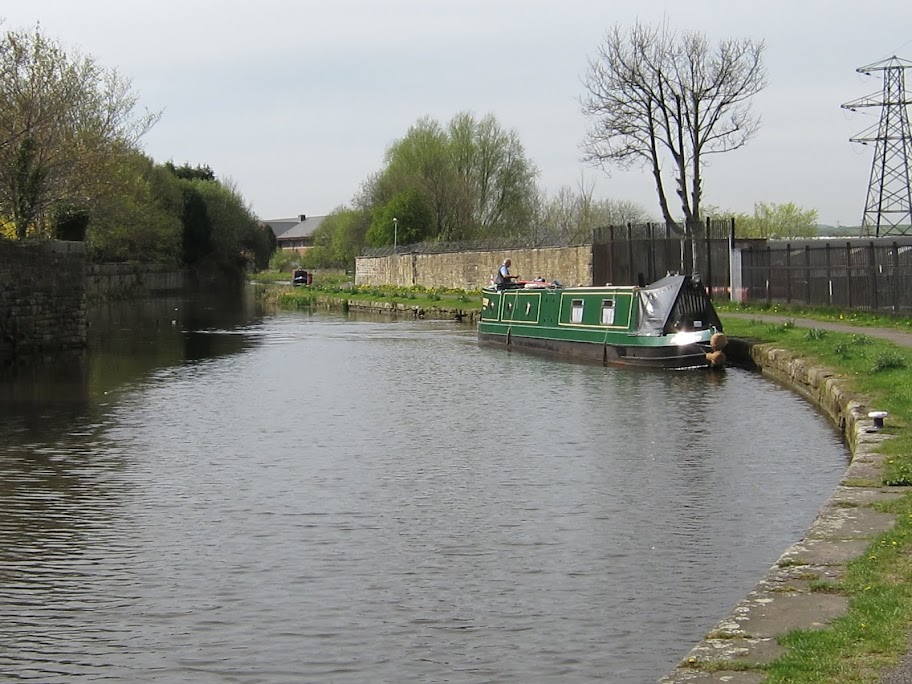 Yesterday saw another leg of the canal walk completed: arriving at Nelson, there are now less than 50 miles to go to Leeds. It was a dry, warm day, sometimes overcast but mainly sunny. Leaving Clayton-le-Moors, the canal winds its way eastwards through the Calder valley.  To the north there are views across to the Pennine fells, most notably Pendle Hill. Along this stretch there were many derelict or ruined farm buildings. Further on, the theme would continue, with a succession of derelict or ruined industrial buildings, probably reflecting the decline of, firstly, sheep farming supplying the woollen industry, and then the closure of the textile mills themselves. 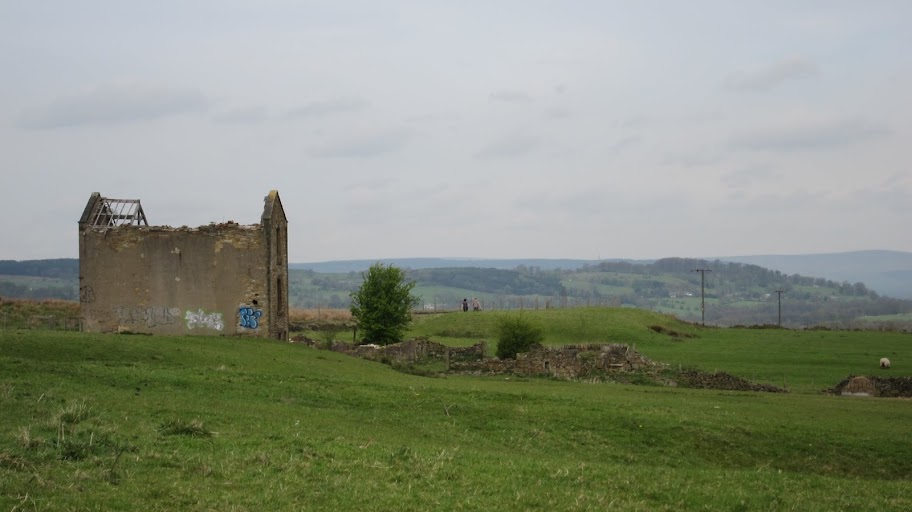 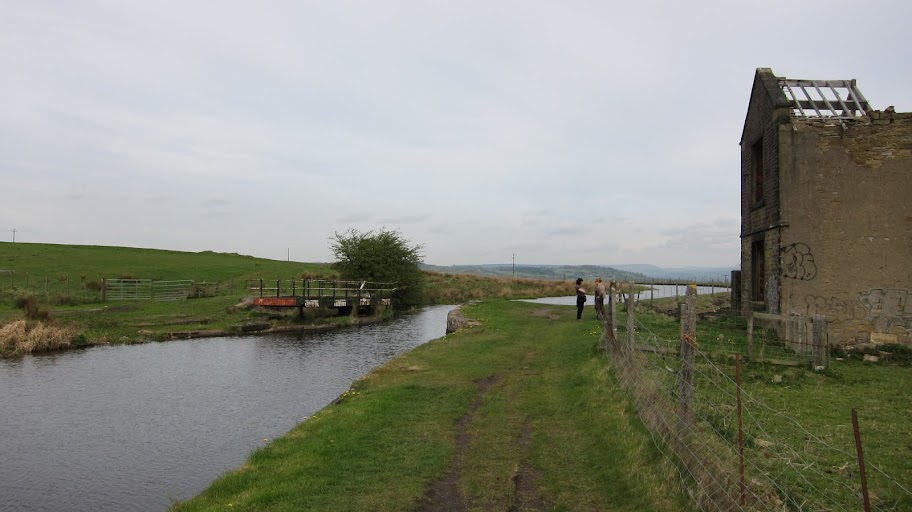 There were still some signs of sheep farming, though. 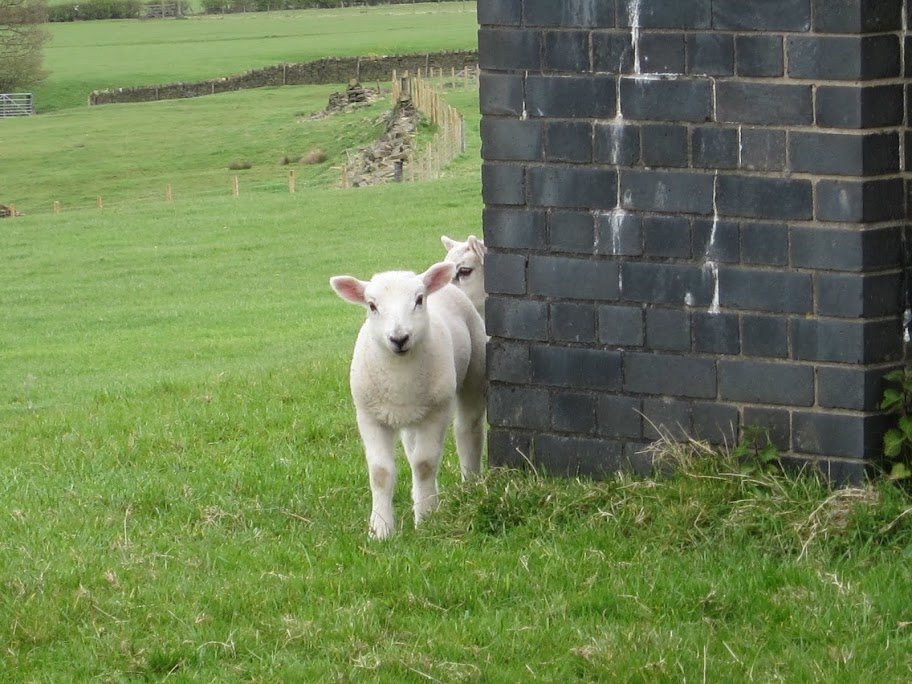 To the south, the M65 motorway is never far away – largely out of sight, but audible as a hiss or, when closer, a dull background roar. 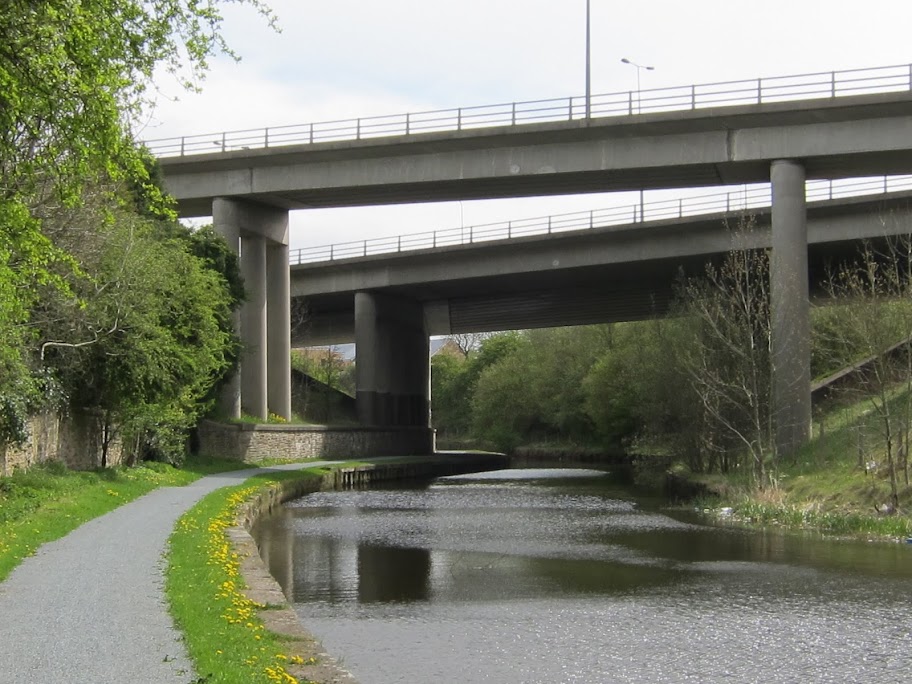 Under one of the motorway bridges, over on the far side of the canal, there was this extensive and painterly graffiti. 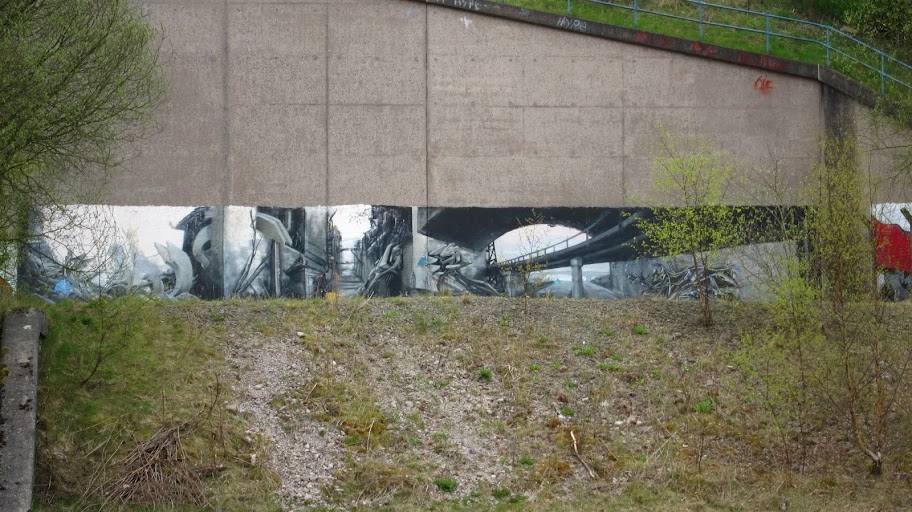 A little further along I photographed art of a different sort. This is a style of painting called Narrowboat Art, which originated on the canals in England during the 19th Century. The earliest boats did not carry this style of decoration, but it began to appear once wives and children joined the boatmen as residents on the narrowboats (because competition from the railways meant they had to give up their cottages and move completely onto the boats).

The life of the working boatmen and women was very tough, with the entire family living in an aft boatmans cabin around 6 feet in length. Boat children recieved little or no education and were expected to assist with the heavy work from a young age, often leading the horse or mule which pulled the boat for many miles each day.

Almost every single part of working narrowboats and their equipment was painted. The most distinctive aspects of Narrowboat Art are the roses, painted in bright primary colours, together with panels depicting castles. The reasons why roses and castles predominate are unclear. So ‘Roses and Castles’ is the common name for this folk art, which would embellish the outside of the boat and its equipment, entwined with lettering on the cabin side, on the rudder and even appeared on horse harnesses and feed tins. 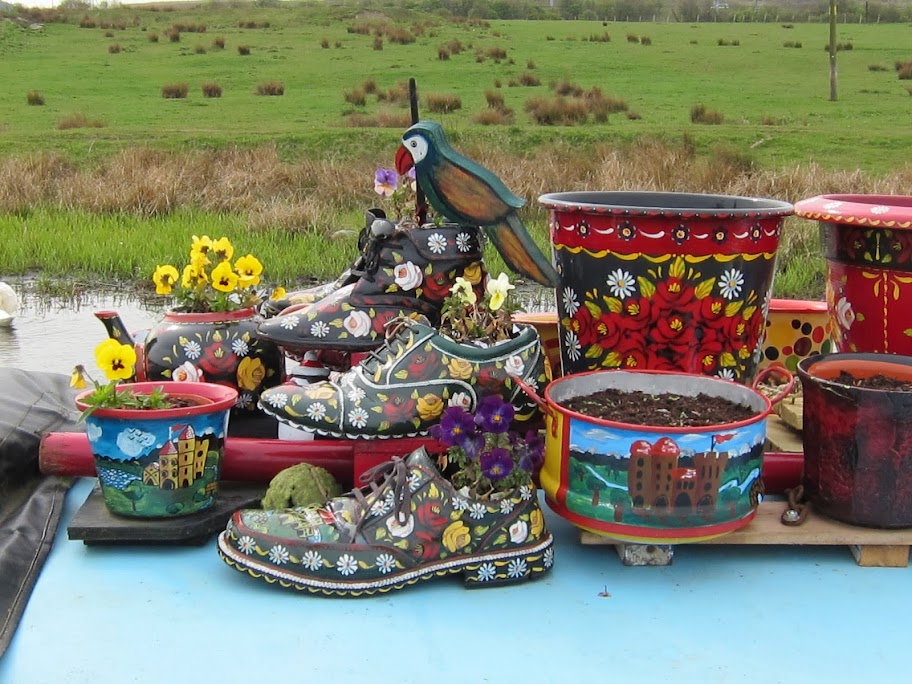 This guy was carrying on a scrap metal business on two narrow boats. 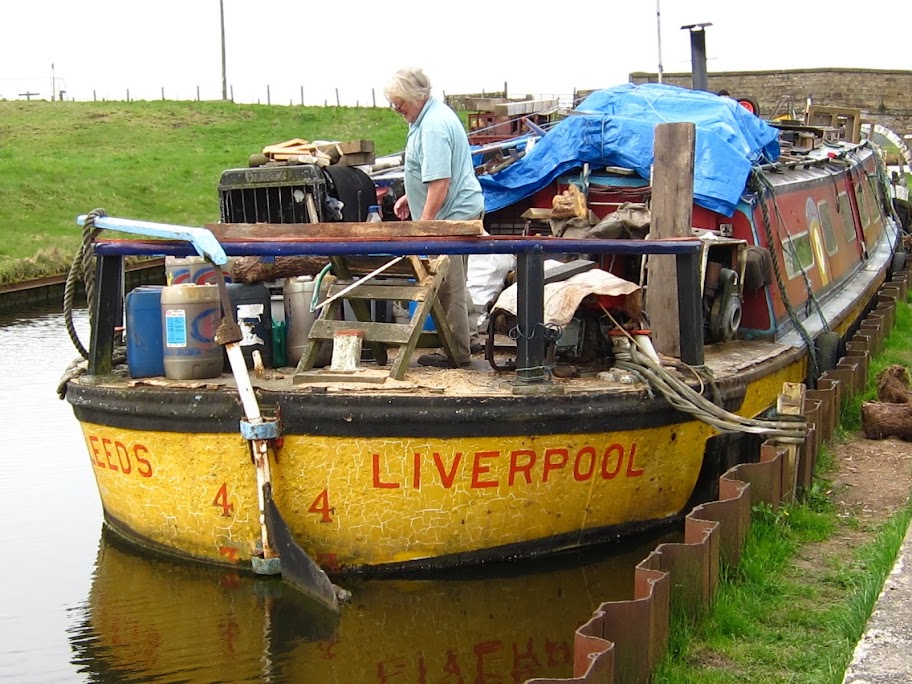 Just north of Accrington the canal diappears into the Gannow Tunnel, re-emerging after a third of a mile to cross the M65 by acqueduct. 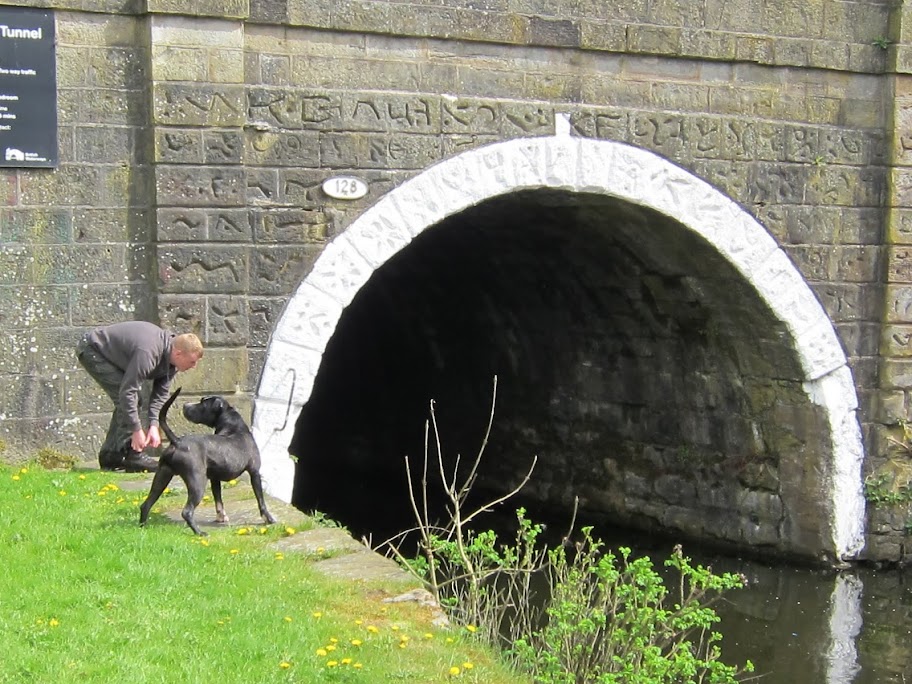 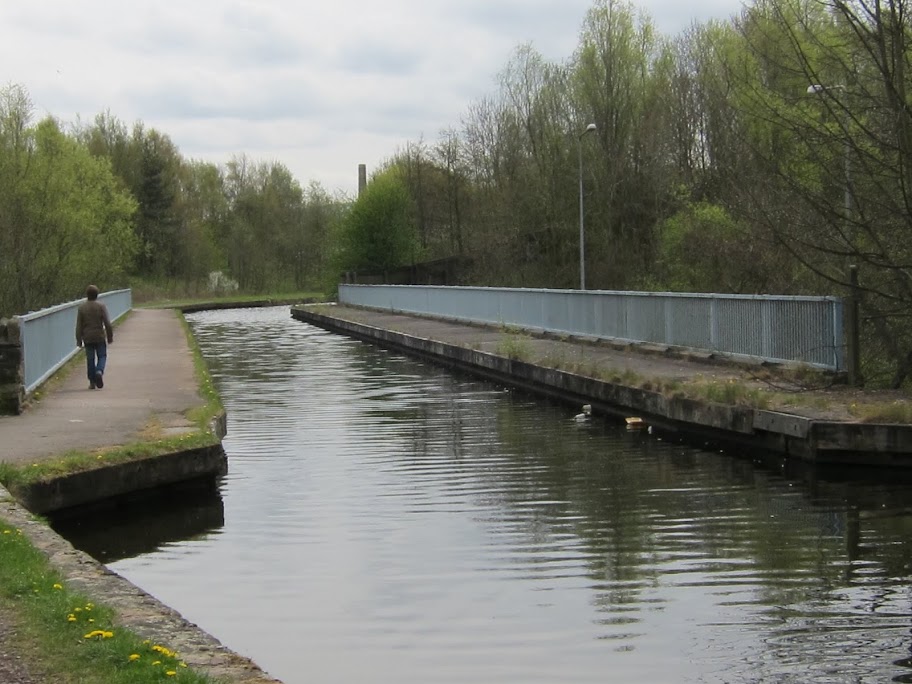 The canal now enters an industrial stretch that leads into Burnley, and there’s a real sense of how the canal was once a main artery for the town and its industries, though now most of these buildings lie derelict. 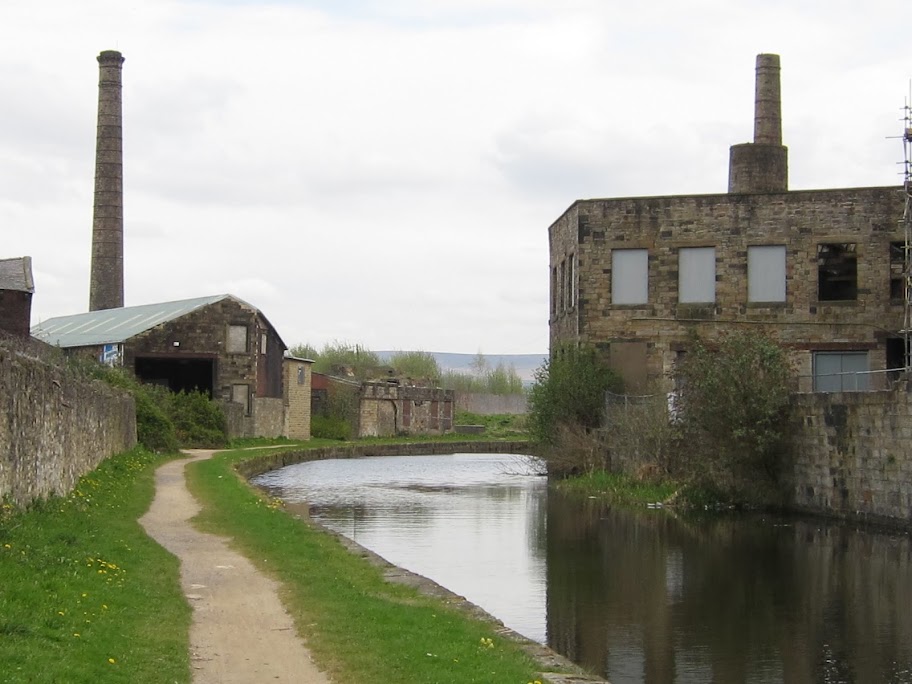 The area between bridge 130 and Burnley Wharf is known as the Weavers’ Triangle, and was once at the heart of Burnley’s textile industry. The name was first used in the 1970s, as interest developed in preserving Burnley’s industrial heritage.  Coming from Liverpool, the first significant industrial building that you encounter is Slater Terrace, built by the millowner George slater in the late 1840s. 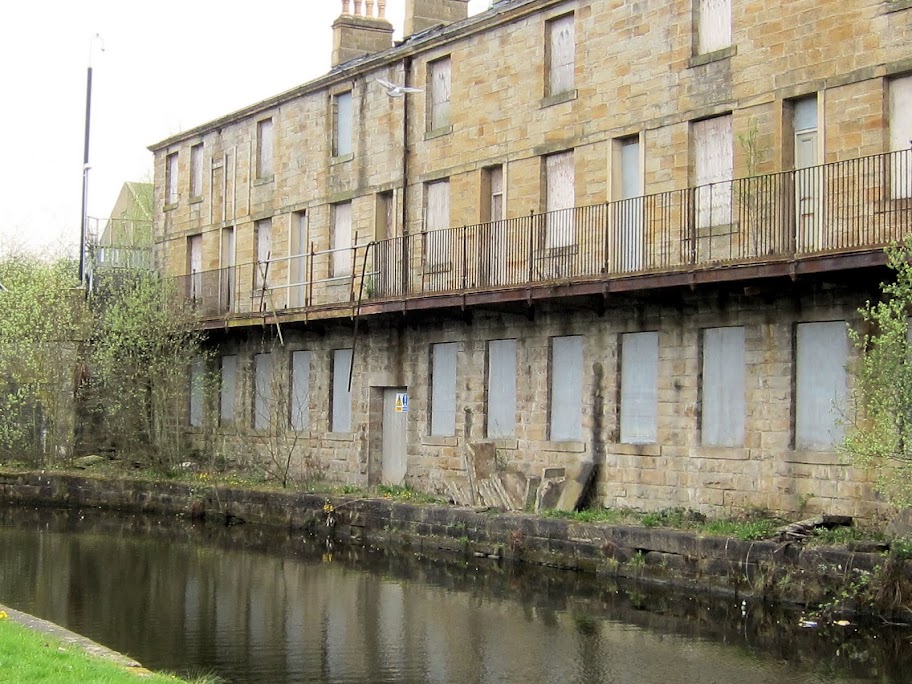 What’s unique about this building – currently in a state of dereliction – is that it combines canal-side warehousing with eleven two-storey houses above, their front doors opening on to an iron landing jutting out over the canal. 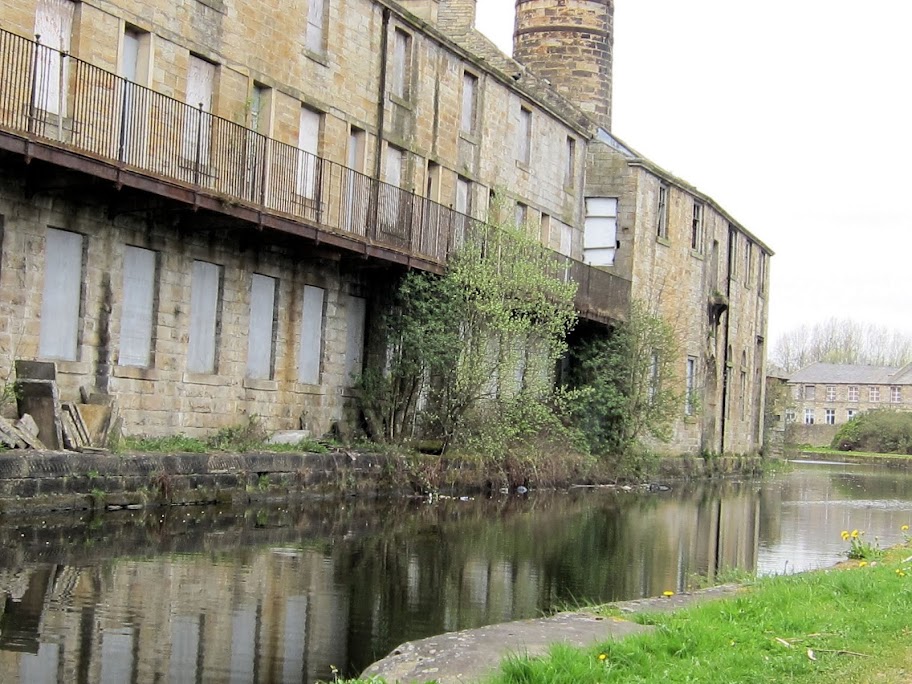 The warehouse would store raw cotton which had been brought up the canal from Liverpool, while warehouse or mill workers would live in the houses.  Although built to a good standard, they soon became overcrowded and were last inhabited in 1900, after which they were converted to industrial use. 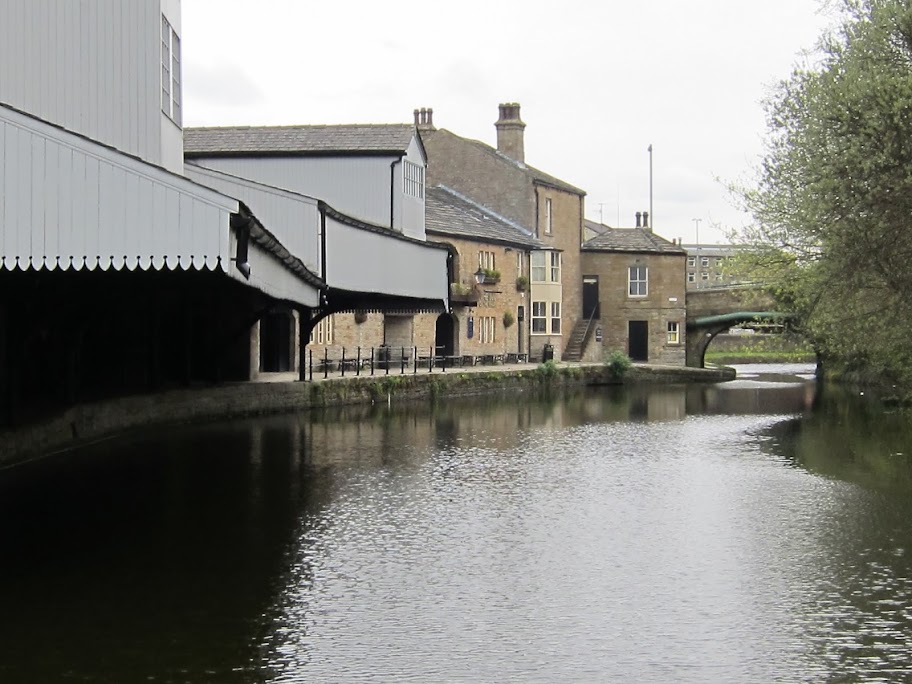 At Burnley Wharf there is an excellent Visitors’ Centre in the old toll house and wharf master’s house.  While the ground floor rooms provide an insight into the daily routine and home life of the wharf master, the basement has been set out to show what home life was like for mill workers a hundred years ago.

The area now known as the Weavers’ Triangle is the best remaining Victorian industrial district in the town – and possibly the country.  The factories here line the Leeds and Liverpool Canal, constructed through Burnley between 1796 and 1801,  which provided transport for the raw cotton and finished cloth, and also, after 1842, water for the mill boilers.  The industrial architecture of the area has a solid, dignified and massive appearance, in a simple, functional
tradition, with walls of local sandstone and stone or slate roofs.

One display shows, in a series of maps, how rapidly  the area developed in the 19th century, the first showing the Weavers’ Triangle area of Burnley in 1827:

There’s also an evocative photo of the area in 1910, looking for the world like an LS Lowry urban landscape: 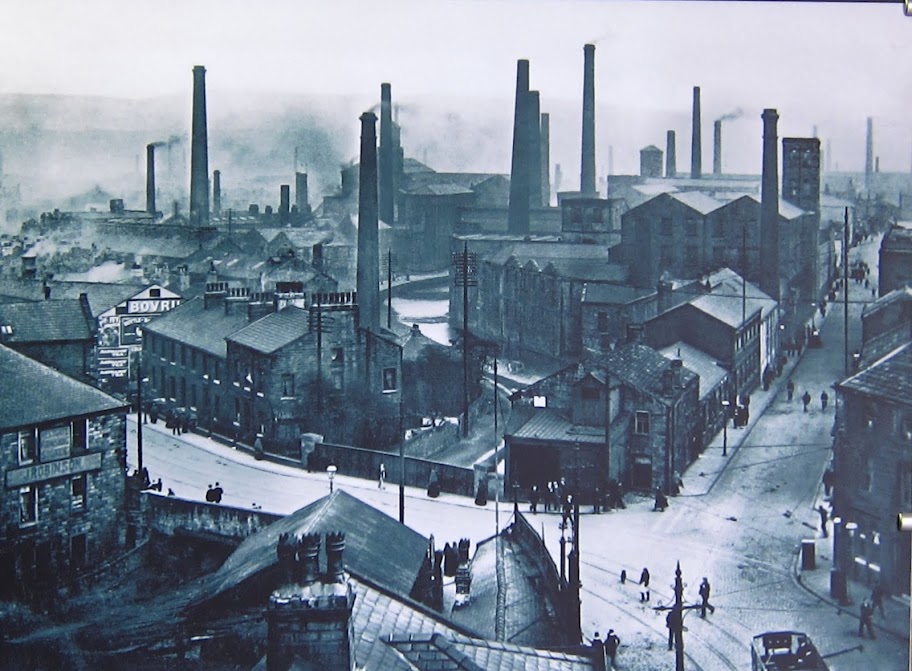 The Wharfmaster’s House, which is now the Weavers’ Triangle Visitor Centre, was built in 1878. The warehouses on Burnley Wharf have been converted to modern use: there were some very attractive-looking office spaces and the Inn on the Wharf, a pub in which the original beams, stonework and flagstones have been preserved, and where I had an excellent lunch (whitebait starter and delicious Shropshire Blue cheese ciabatta-style baguette) accompanied by a pint of Old Speckled Hen. 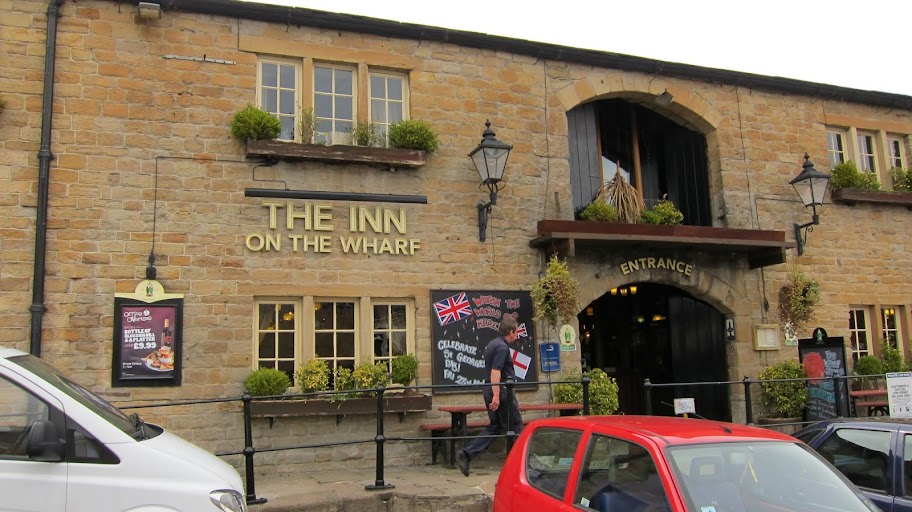 Burnley’s textile industry dates from the Middle Ages, when a fulling mill was built on the banks of the Brun in 1296.  Wool was the main cloth made in the area until the end of the 18th century, when it was superseded by cotton.  The first cotton mills were for spinning – weaving being done in the home.  By 1850, weaving had also become a factory industry and East Lancashire was taking the lead in improving the power loom.  After 1870, the weaving side of the industry expanded at the expense of spinning, which became concentrated in the south of the county.  By the end of the century, Burnley was the leading cotton-weaving town in the world.  The peak was reached in 1913 when the district had over 100,000 looms. 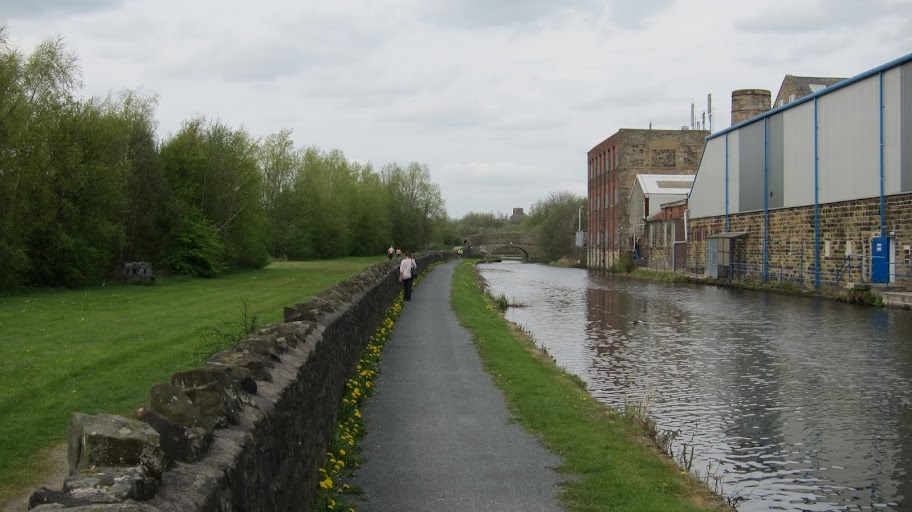 The ‘Straight Mile’ is the name given to the Burnley Embankment, which carries the canal across the valley of the River Calder.  The embankment was constructed between 1796 and 1801, by an army of navvies using spoil brought by boat
from the canal cutting to the north of Burnley. Earlier, observing the way that the canal maintained a level course by being raised on an embankment above the surrounding fields, I had wondered – why don’t canals leak? The answer, apparently, is a process called ‘puddling’ – heavy clay was used to line the bed of the canal.  Nowadays, of course, concrete would be used. 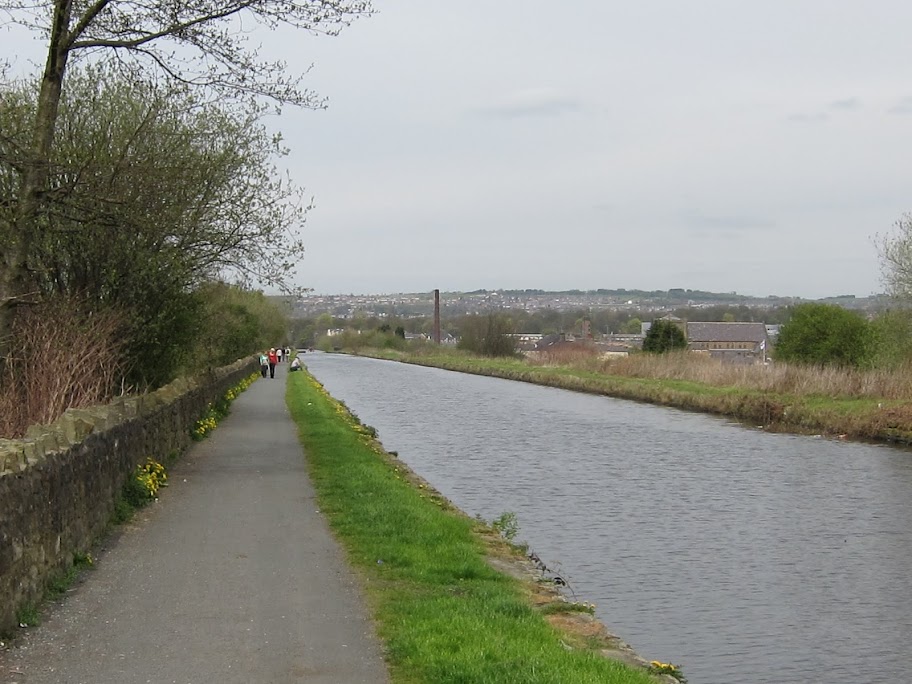 Construction of the Embankment meant the Calder valley could be traversed by the canal without the need for two systems of locks. Walking along the 60 feet high embankment  gives dramatic views across the rooftops of the town to the surrounding hills.  Half-way along the embankment, the canal crosses Yorkshire Street on an aqueduct, known locally as ‘t’ Culvert’.  It was constructed in 1926 to replace the original one built in the 1790s. 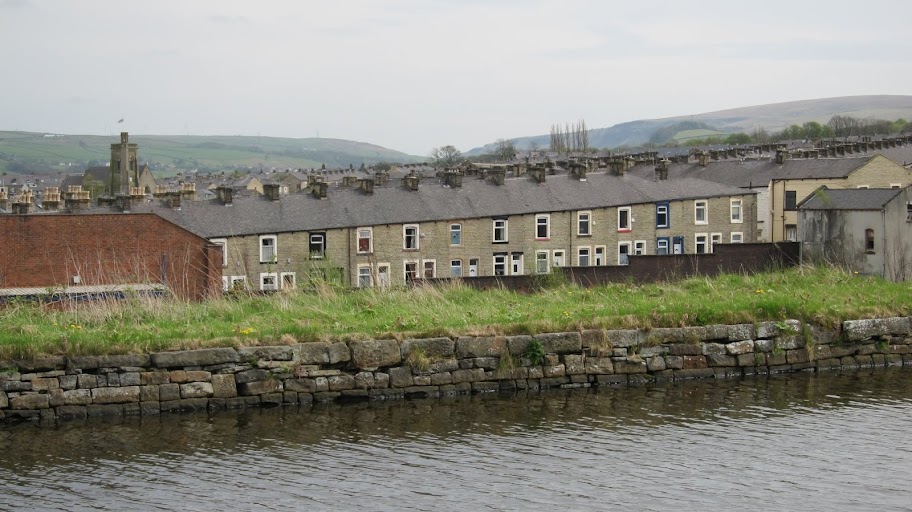 Although the Embankment and the surrounding area have been tidied up to provide an attractive promenade and shopping district, further on there are more signs of the decayed industrial past. 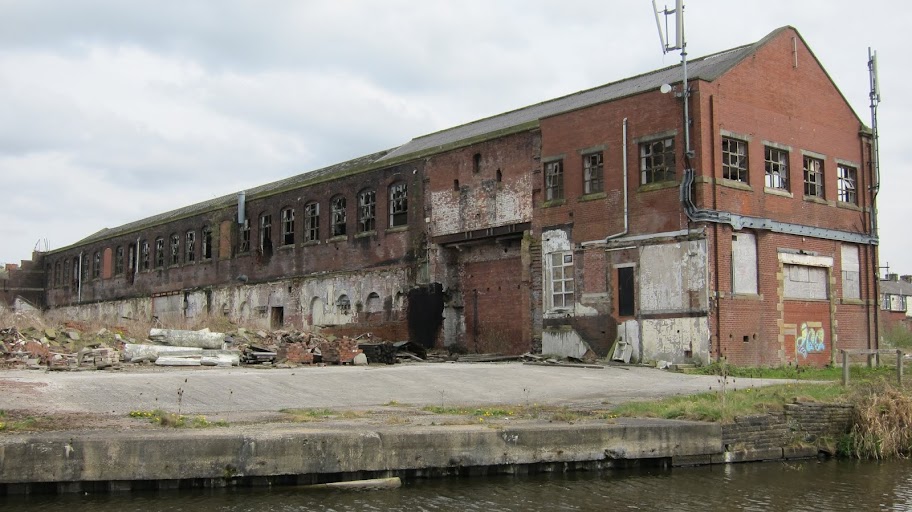 But the surrounding landscape is beautiful, with Pendle Hill dominating the views. 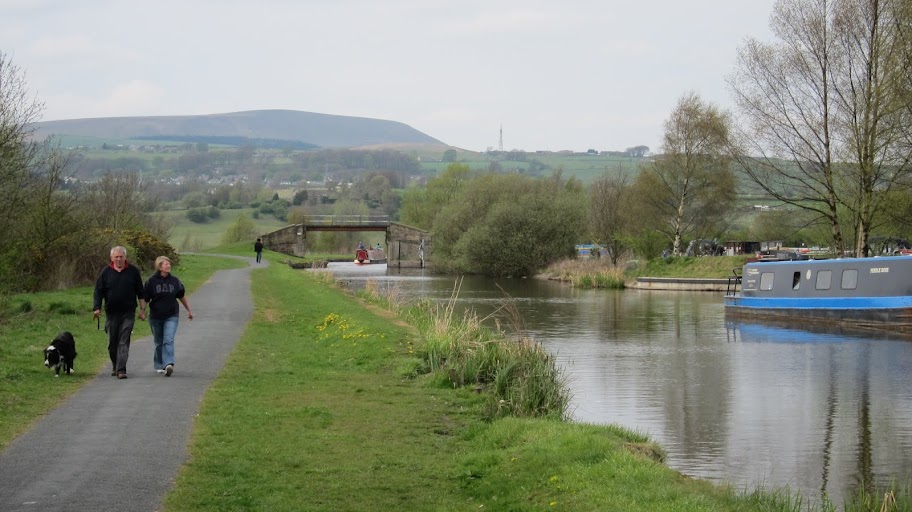 Five more miles of towpath brings you to Nelson, another town that grew as a result of the arrival of the canal in 1796.  It takes its name from an inn called the Lord Nelson around which the town started to grow.  Like Burnley, its economy was based on cotton weaving. Later the town became noted for the production of confectionery as well, including Jelly Babies and Victory Vs. These industries have long gone, leaving the town with high unemployment. 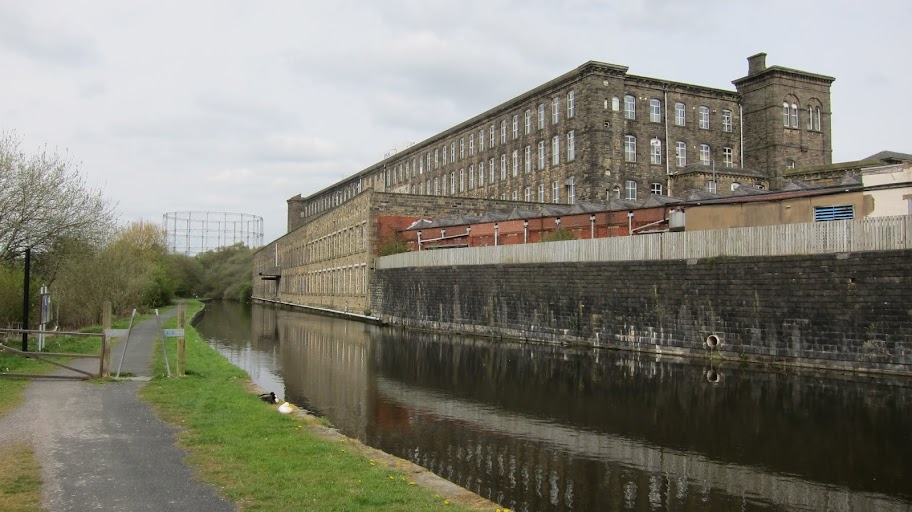 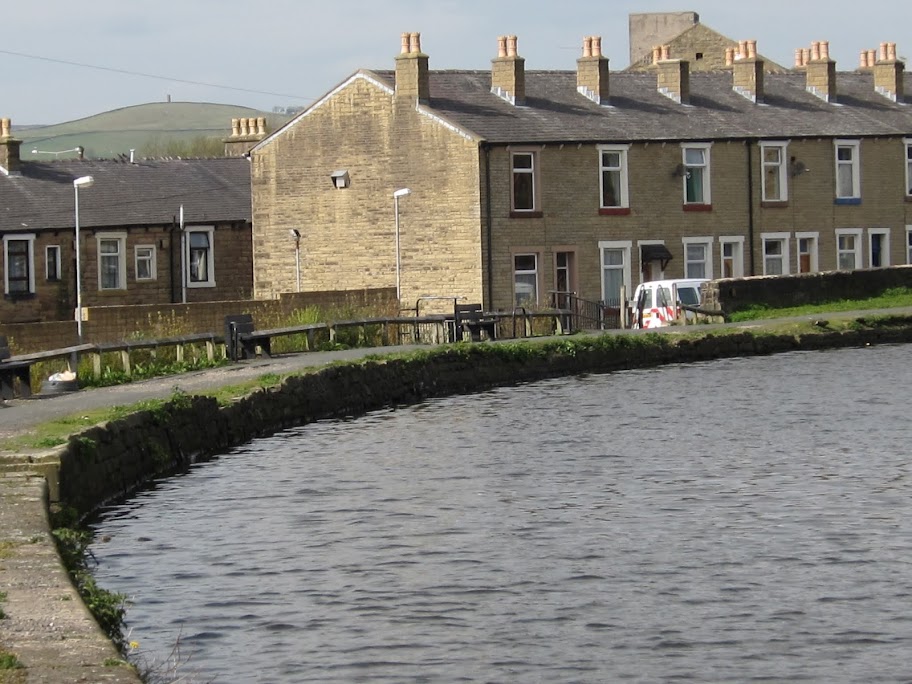 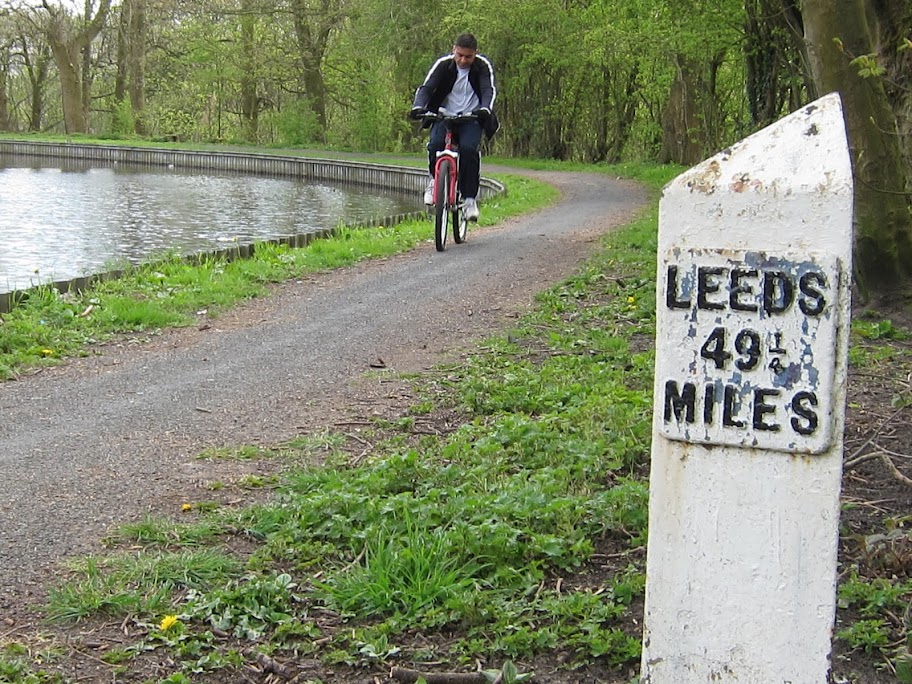 Driving home along the M65, the sea at Morecambe Bay was a glinting gleam of silver in the evening sun. On the stereo: Paul Weller, Wake Up The Nation, and the Rolling Stones, Exile on Main Street.

Next: Nelson to East Marton

Around the start of the 19th century, on the road between the towns of Burnley and Colne there was an inn called the Lord Nelson. Just off the road was a tiny village called Marsden. As the Lancashire cotton industry grew, a town started to grow around the inn, and it took its name from the inn.
53.410777 -2.977838

4 thoughts on “Walking the Canal: Accrington, Burnley and Nelson”