In the last few days we have had some glorious days and the colours of the autumn leaves have been wonderful. I captured some images in Calderstones Park as well as at Chatsworth in Derbyshire. October is the month for painted leaves. Their rich glow now flashes round the world. As fruits and leaves and the day itself acquire a bright tint just before they fall, so the year near its setting. October is its sunset sky; November the later twilight….

At present these burning bushes stand chiefly along the edge of the meadows, or I distinguish them afar on the hill-sides here and there. Sometimes you will see many small ones in a swamp turned quite crimson when all other trees around are still perfectly green, and the former appear so much the brighter for it…

Some single trees, wholly bright scarlet, seen against others of their kind still freshly green, or against evergreens, are more memorable than whole groves will be by-and-by. How beautiful, when a whole tree is like one great scarlet fruit full of ripe juices, every leaf, from lowest limb to topmost spire, all aglow, especially if you look toward the sun! What more remarkable object can there be in the landscape? Visible for miles, too fair to be believed. If such a phenomenon occurred but once, it would be handed down by tradition to posterity, and get into the mythology at last. 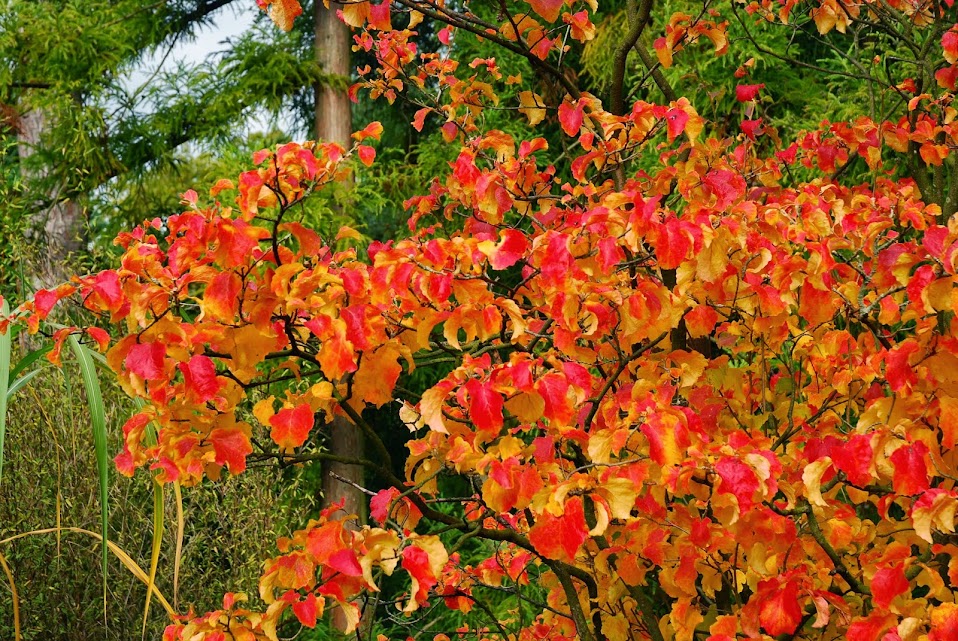 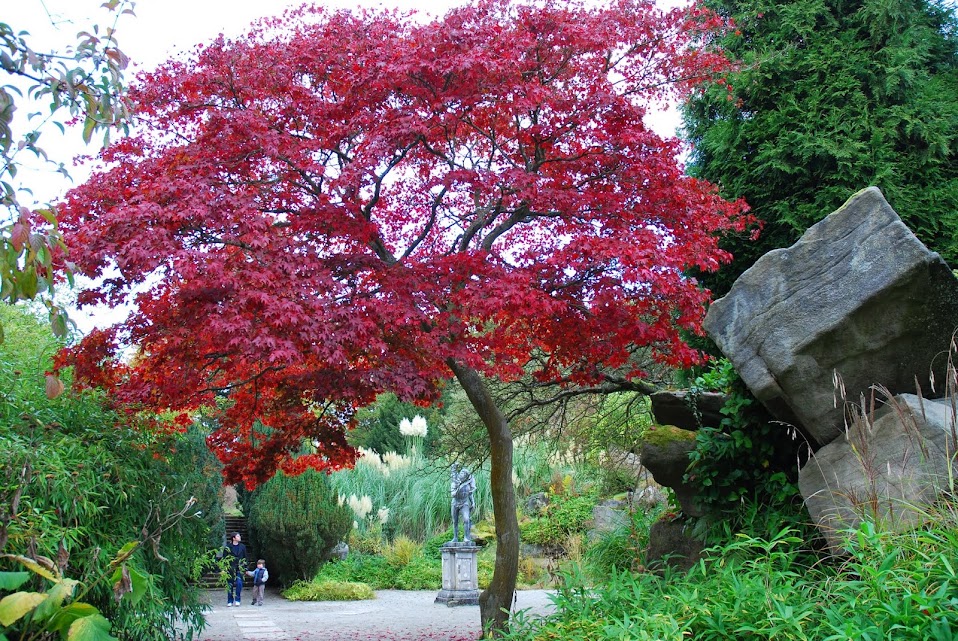 Why do the leaves change colour in autumn –  and should we interpret the transformation as a symptom of decline? In a piece in The Guardian, A Season of Splendour,Richard Mabey wrote:

It is temperament, not age, that shapes your view of the season. You may see it as a fading away, a packing up, or as a time of packing in another sense – the excited gathering of resources before a long journey. DH Lawrence, a perennial grouch, complained that, “The autumn always gets me badly, as it breaks into colours. I want to go south … where the cold doesn’t crouch over one like a snow-leopard waiting to pounce.” But John Keats, already sensing he was mortally ill, was inspired by a late September day in Winchester to pen one of the most glowing and loved poems in the English language. He wrote to a friend afterwards that he found autumn’s “temperate sharpness” more comforting than the “chilly green of spring”, that there was something comforting and healing about it.

And in To Autumn itself he makes a litany of images that have decisively shaped every optimistic romantic’s expectations of the season: the “mists and mellow fruitfulness”; the apples bending “the moss’d cottage trees”; the sunset-tinged stubble fields; the last swallows assembling before their great journey. Keats has the biological evidence on his side. Autumn is not a time of slowing down, an annual rehearsal of senescence, but a time of furious activity, of new beginnings, of the setting of the seeds of the next generation, of great movements of creatures.

Just at the moment that Keats’s “gathering swallows” are departing for Africa, millions of creatures from the frozen north are fleeing into Britain. Immense flocks of wild geese arrive from the tundras of Iceland, Greenland and Russia to winter along the east and south coasts, from the Solway Firth to the Hampshire Avon. In Norfolk alone, 100,000 pink-footed geese gather. As they fly to roost at dusk, their ragged skeins are sometimes so high that they glow pink in the rays of a sun that is already invisible from ground level. And from Scandinavia come a million fieldfares – a faint sound of castanets in the night sky, then clouds of broad-shouldered birds erupting from the top of hawthorn bushes, dappled greys and fawns against the scarlet berries.

But it is the colouring of the leaves and their eventual fall that form the defining display of autumn, and something that can be as spectacular in old England as it is in New. The metamorphosis is not something regular and fixed. It is affected by summer rainfall and temperature, by local differences in soil and drainage, by the physiology of individual trees. The turning begins on high ground and in the extreme north and south, and flows down into the valleys. It ebbs and ripples through woods, cherries often lighting up first, vermilion and pink, then the beeches’ tan and gold and the maples’ lemon, then the russet-tinged ochre of oaks, and the last thin yellows of the hazel and ashes. It dashes about individual trees, sometimes descending in falls and layers from the tip of the tree, sometimes daubing a single branch with chrome weeks before the rest of the foliage changes.

What is it all for, this lavish and extravagant light show? No one is sure why deciduous trees shed their leaves in the first place. It may be to rid the tree of toxins accumulated over the summer. More likely it is another act of conservation, a way of reducing the loss of water, which tree roots find hard to take in from cold soil. 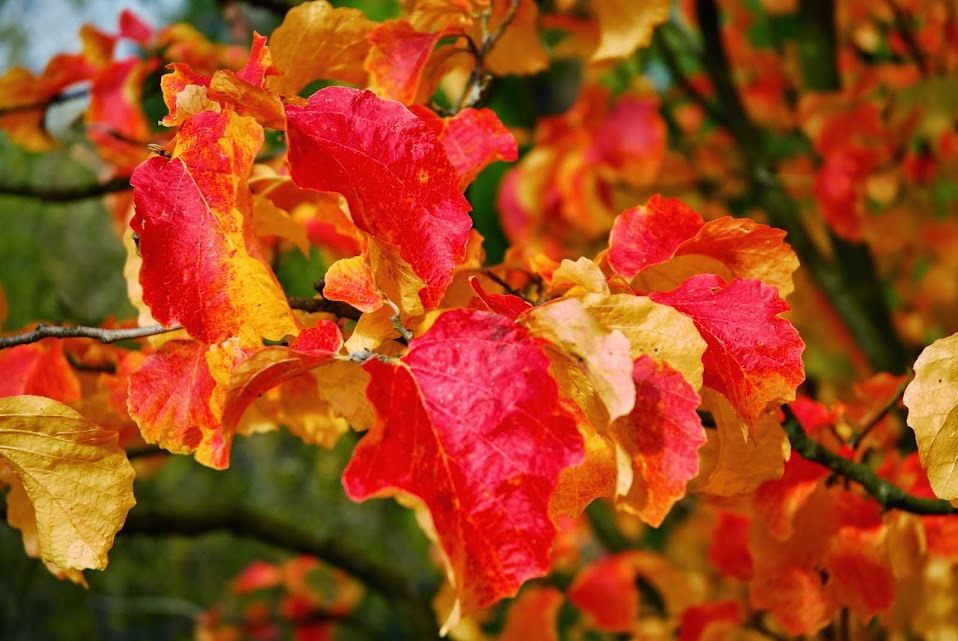 In Wildwood: A Journey Through Trees, Roger Deakin wrote:

The chameleon leaves are litmus to the chemical changes going on inside them. The tree senses a particular moment when the balance between day and night has altered.  It appears to measure the hours and minutes with some precision, and shorter days triggger the development of a suicidal hormone in each leaf.  It creeps down the leaf stem to the joint with the woody twig, where it stimulates the growth of a sphincter of brittle, hard tissue that gradually closes on itself, cutting off the supply of sap.  Thus deprived of water, the chlorophyll in the leaf disintegrates.  Chlorophyll makes leaves look green by absorbing the blue-and-red light of the sun and masking other pigments.  As it breaks down, the leaf reveals the colours of its other underlying chemical constituents.  Then it dries still more, the stem joint snaps, and it goes floating off to the woodland floor to settle in pools of yellow, orange or soft chestnut-browns…The leaves of different species contain distinctive pigments: the yellow carotenoids of willow, poplar or hazel; the red anthocyanins of maple or dogwood…or the earthy tannins of oak leaves… 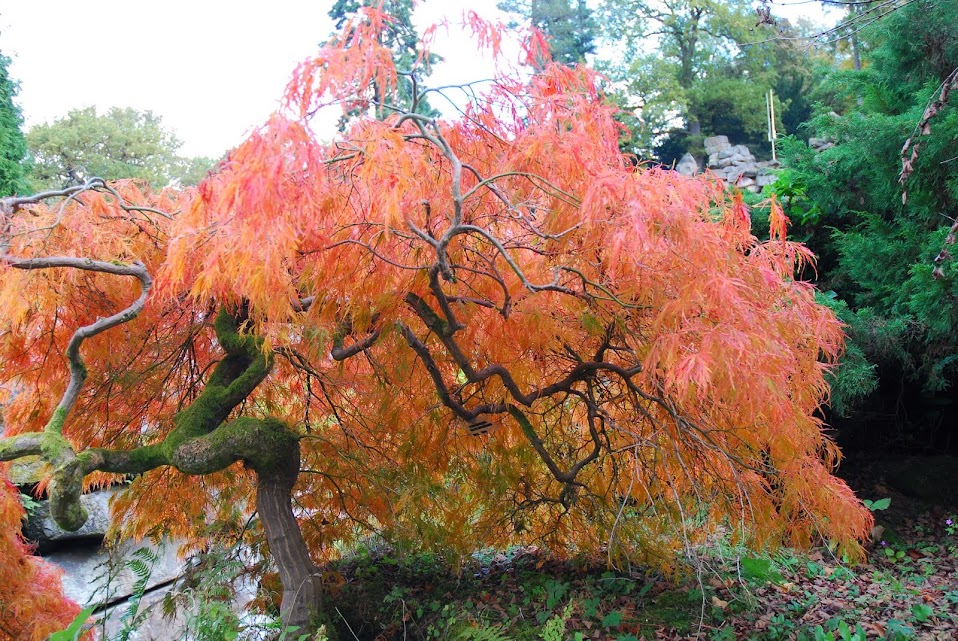 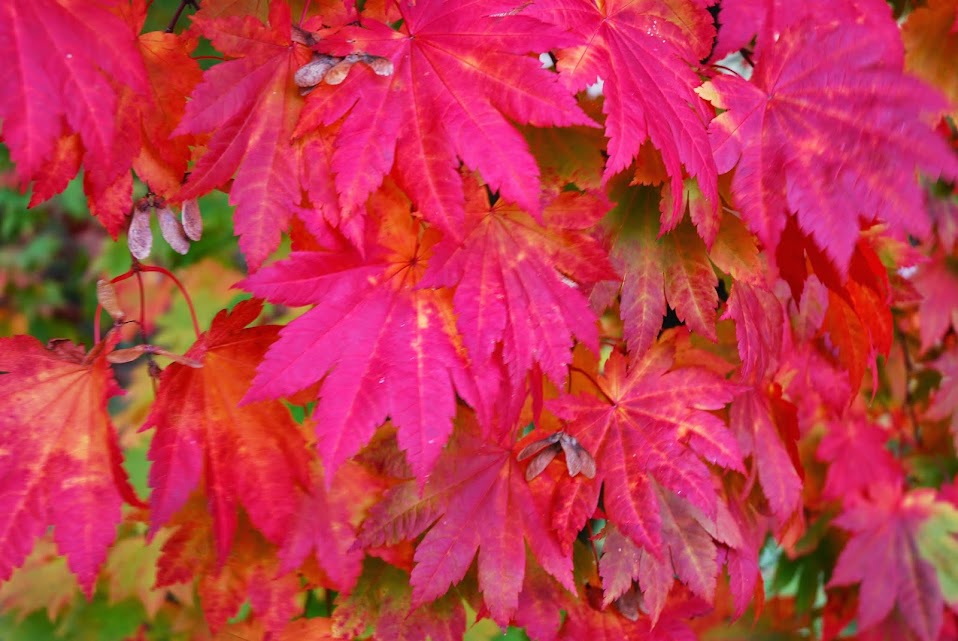 Contradicting the essence of these two passages, I’ve chosen a poem by WB Yeats that begins with a perfect image of autumn perfection, but continues to meditate on the pain of living in a time when ‘all’s changed’. He was writing in 1919.

The trees are in their autumn beauty,
The woodland paths are dry,
Under the October twilight the water
Mirrors a still sky;
Upon the brimming water among the stones
Are nine-and-fifty Swans.

The nineteenth autumn has come upon me
Since I first made my count;
I saw, before I had well finished,
All suddenly mount
And scatter wheeling in great broken rings
Upon their clamorous wings.

I have looked upon those brilliant creatures,
And now my heart is sore.
All’s changed since I, hearing at twilight,
The first time on this shore,
The bell-beat of their wings above my head,
Trod with a lighter tread.

Unwearied still, lover by lover,
They paddle in the cold
Companionable streams or climb the air;
Their hearts have not grown old;
Passion or conquest, wander where they will,
Attend upon them still.

But now they drift on the still water,
Mysterious, beautiful;
Among what rushes will they build,
By what lake’s edge or pool
Delight men’s eyes when I awake some day
To find they have flown away? 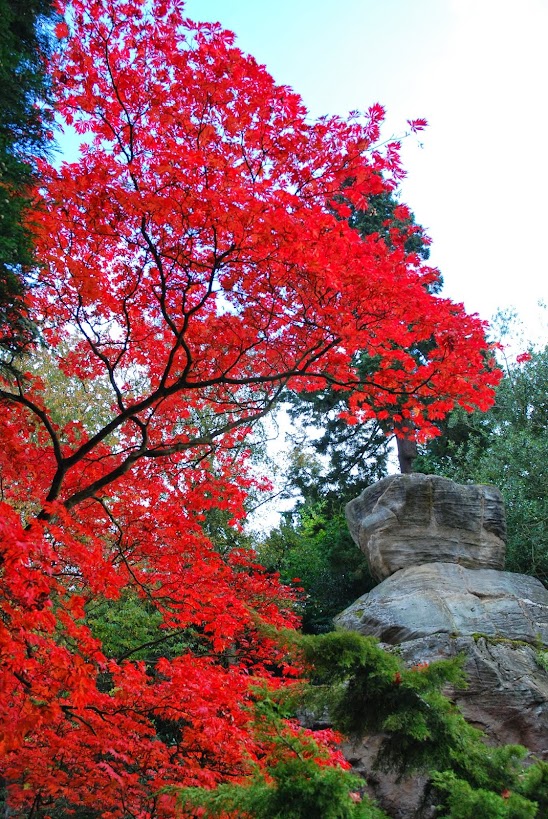 One thought on “Autumn leaves”