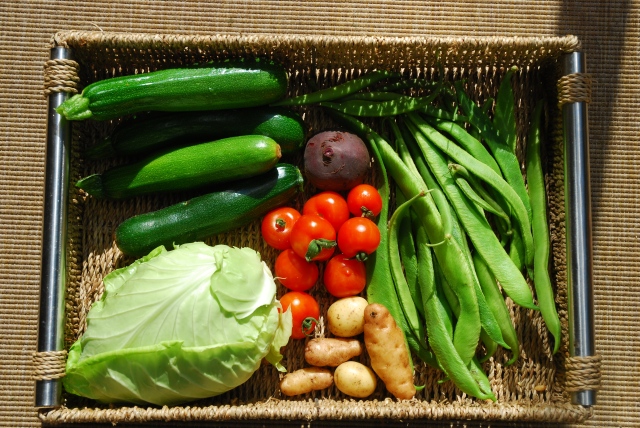 It’s such a simple thing…but there is so much pleasure in gathering in the season’s growth in the vegetable plot. When we retired, R started deep beds in the back garden and this is a snap of today’s mouthwatering harvest.

It’s interesting that we seem to be part of the zeitgeist; last week Nigel Slater’s new BBC TV cookery series began, in which the dishes draw on the products of his home vegetable patch and friends’ allotments. This is part of the BBC’s Dig In campaign to encourage us to ‘grow our own grub’.

And last week in The Guardian, Madeleine Bunting, commenting on Michelle Obama’s first harvest from the White House vegetable garden, observed that ‘over the last two years, vegetable growing has gone from being a grandad’s hobby to hip’. There are unprecedented waiting lists for allotments (estimated at 100,000 earlier this year) and the sales of vegetable seeds, with UK companies reporting increases of 30% in 2007 and another 40% in 2008.

We have damaged this planet. We have plundered its natural resources, emptied its seas, scorched its earth, turned its beating heart into a toxic rubbish tip. There have been decades, if not centuries, of take rather than give. I do not wish to relinquish entirely the deep sense of fulfilment I get from eating meat and fish, but I now place less importance on them in my diet than I did. It is the meat and the crackling rather than the vegetables that are now on the side. When you lift the lid of my casseroles, peer into my pots or read my plate, it is the veggies that play the starring role.

And yes, it is worth “reading” our plate before we tuck in. Where did that food come from? Does it sit comfortably with our conscience and what we believe good food to be? What, other than our immediate appetite, does it benefit, and crucially, what damage is that plate of food doing?

If digging up our gardens, getting an allotment, shopping at farmers’ markets, growing organically and eating sustainably is seen as a sign of our collective guilt for what we have done to the planet, then so be it. We can never totally undo what has been done. But there are some of us, hopeful, deluded, possibly a wee bit mad, who are happy to try to put in more than we take out. One of the ways we can do that is to eat a greener diet…

The land on which the house sits had, until the early 1800s, been pasture for the local dairy farms. The remains of dairies are scattered all over this part of London. There has been a cheesemonger, in various guises, further along the terrace since Victorian times. Mostly laid to lawn that had gone to seed, the garden had but a single fig tree, its grey branches stretched out like spindly, adolescent arms across the brown grass, and an old and graceful golden robinia. The space was basically a clean slate. At the stroke of midnight, I sat down on the back steps and vowed to dig up my lawn and grow at least some of my own vegetables and fruit.

Cabbages catch at the moon.

It is late summer, no rain, the pack of the soil cracks open, it is hard summer.
In the night the cabbages catch at the moon, the leaves drip silver, the rows of cabbages are series of little silver waterfalls in the moon.

‘And he gave it for his opinion, that whoever could make two ears of corn, or two blades of grass, to grow upon a spot of ground where only one grew before, would deserve better of mankind, and do more essential service to his country, than the whole race of politicians put together’. Jonathan Swift, Gulliver’s Travels

‘Can the garden afford any thing more delightful to view than those forests of asparagus, artichokes, lettuce, pease, beans and other legumes and edulous plants so different in colour and of such various shapes, rising at it were from the dead and piercing the ground in so many thousand places as they do, courting the admiration or requiring the care of the diligent Gardiner’. Stephen Switzer, The Practical Gardener, 1727

‘I came to love my rows, my beans, though so many more than I wanted. They attached me to the earth, and so I got strength like Antaeus’. Henry David Thoreau

‘The first gatherings of the garden in May of salads, radishes and herbs made me feel like a mother about her baby – how could anything so beautiful be mine. And this emotion of wonder filled me for each vegetable as it was gathered every year. There is nothing that is comparable to it, as satisfactory or as thrilling,as gathering the vegetables one has grown’. Alice B. Toklas

We spray the fields and scatter
The poison on the ground
So that no wicked wild flowers
Upon our farm be found.
We like whatever helps us
To line our puree with pence;
The twenty-four-hour broiler-house
And neat electric fence.

All concrete sheds around us
And Jaguars in the yard,
The telly lounge and deep-freeze
Are ours from working hard.

We fire the fields for harvest,
The hedges swell the flame,
The oak trees and the cottages
From which our fathers came.
We give no compensation,
The earth is ours today,
And if we lose on arable,
The bungalows will pay.

All concrete sheds around us
And Jaguars in the yard,
The telly lounge and deep-freeze
Are ours from working hard.