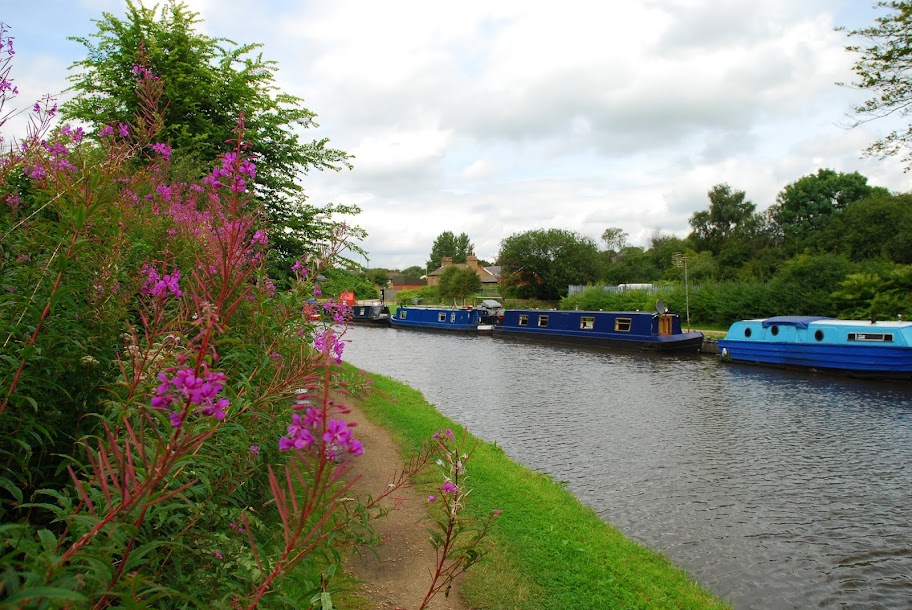 And the seasons they go round and round…

It’s been a while since I broke off the walk at Wigan top lock and in that time summer has come, and now is on the wane. The towpath is lined now with rose hips, rose bay willow herb, elder berries, sloes and blackberries; I crammed some of this black honey of summer into my mouth to spur me on towards Johnson’s Hillock and the Top Lock pub:

When the blackberries hang
swollen in the woods, in the brambles
nobody owns, I spend
all day among the high
branches, reaching
my ripped arms, thinking
of nothing, cramming
the black honey of summer
into my mouth; all day my body
accepts what it is. In the dark
creeks that run by there is
this thick paw of my life darting among
the black bells, the leaves; there is
this happy tongue. 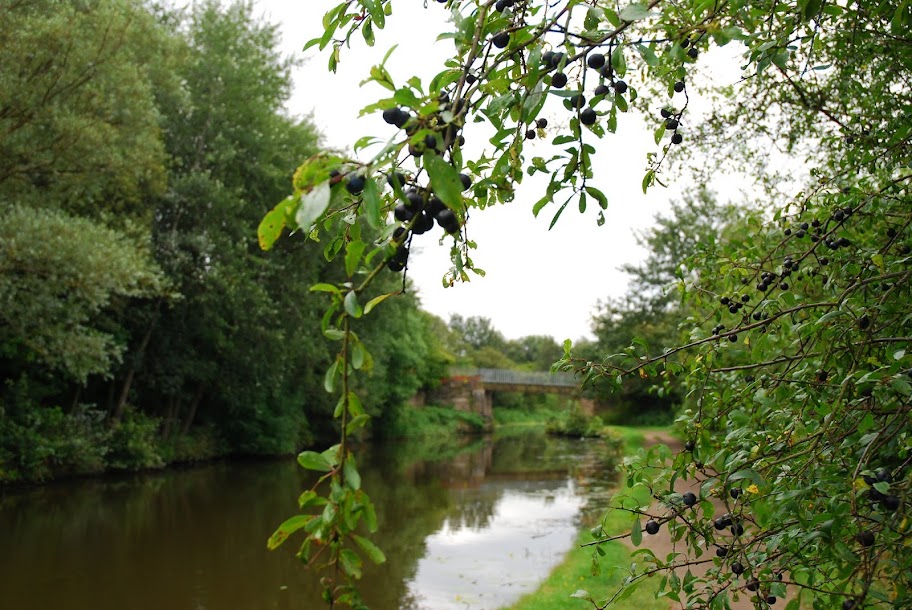 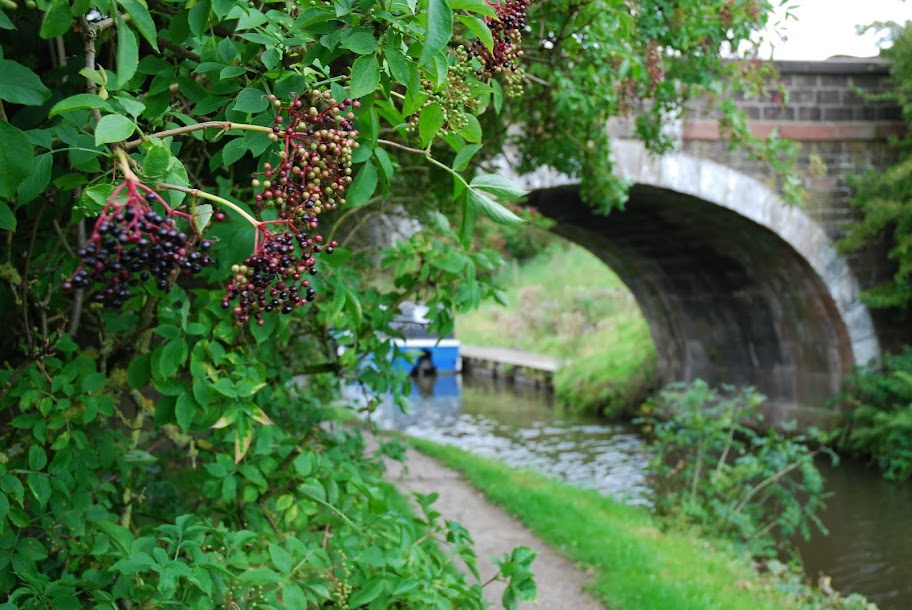 On the telephone wires, swallows were gathering, perhaps preparing for the long journey south that they will embark upon sometime in the next few weeks. 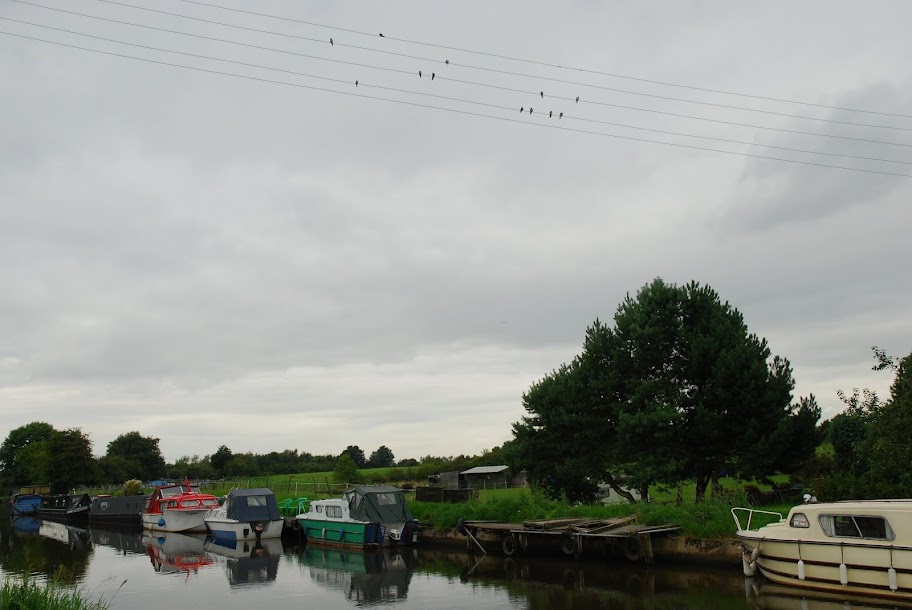 However, one of the dominant memories of this particular walk will be the sight of banks and masses of the pesky Himalayan balsam – it was there lining the tracks on the railway line to Wigan and back, along the tow bath and in drifts extending through the woods adjoining, and lining the road on the bus journey back to Wigan. 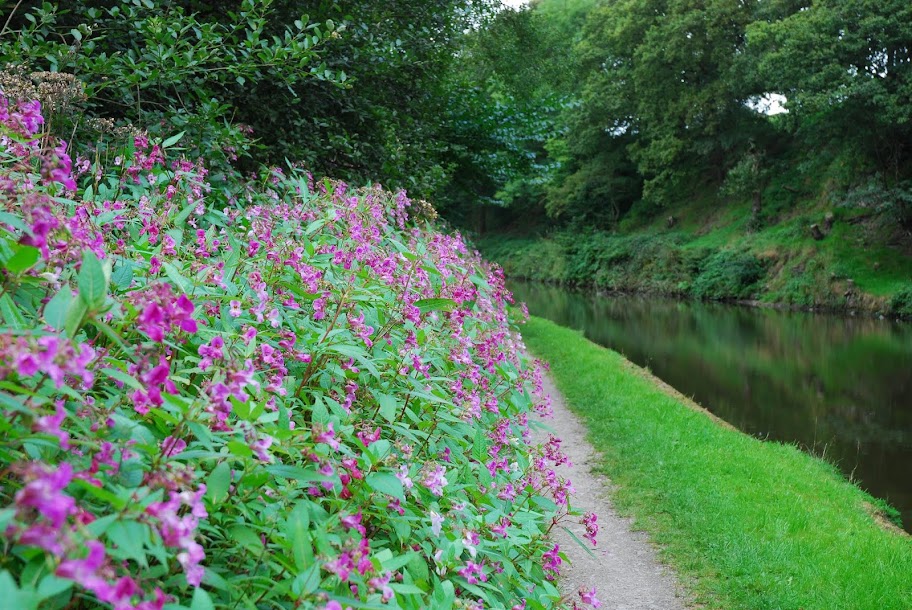 This was perhaps the least satisfying stage of the walk – partly because a good 50% of the time – from Adlington, past Chorley and on into Blackburn – the canal is accompanied by motorway, the roar of traffic constantly present though hidden from view by woodland.  And it’s the way that the canal burrows deep through the tree cover here that is also unsatisfactory – it was only on the bus ride back from Blackburn to Chorley that I got any real sense of the surrounding countryside: the moorland views towards Rivington Pike, with the stone terraces of the 19th century mill towns climbing  through the hills. 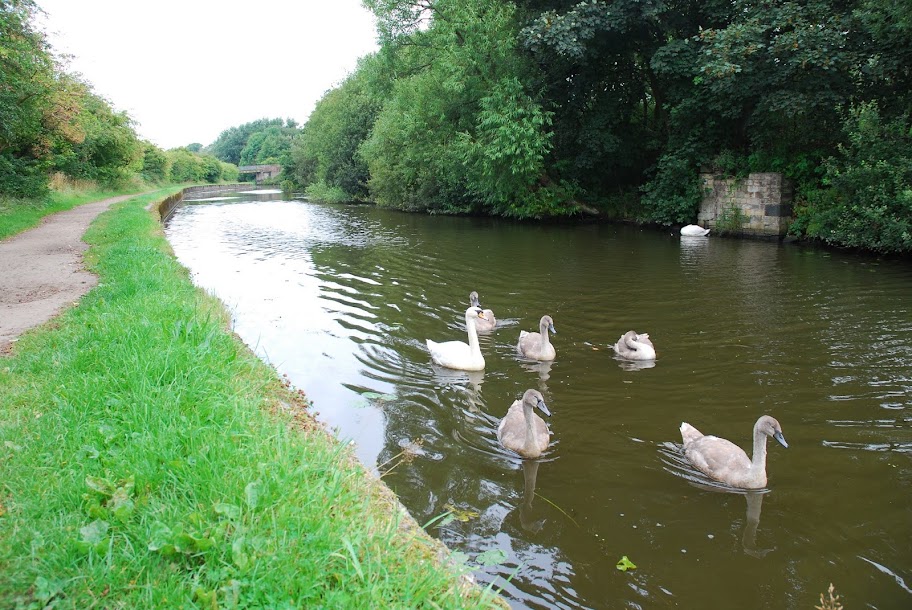 I picked up the trail again above Wigan top lock, where the canal runs along the fringe of Haigh Country Park. Haigh Hall was once the seat of the Earl of Balcarres who profited from the wealth generated by the coal seams and the Haigh Iron Works which were developoed from the 1840s onwards. In the photo below, Haigh Hall can just be made out on the skyline. 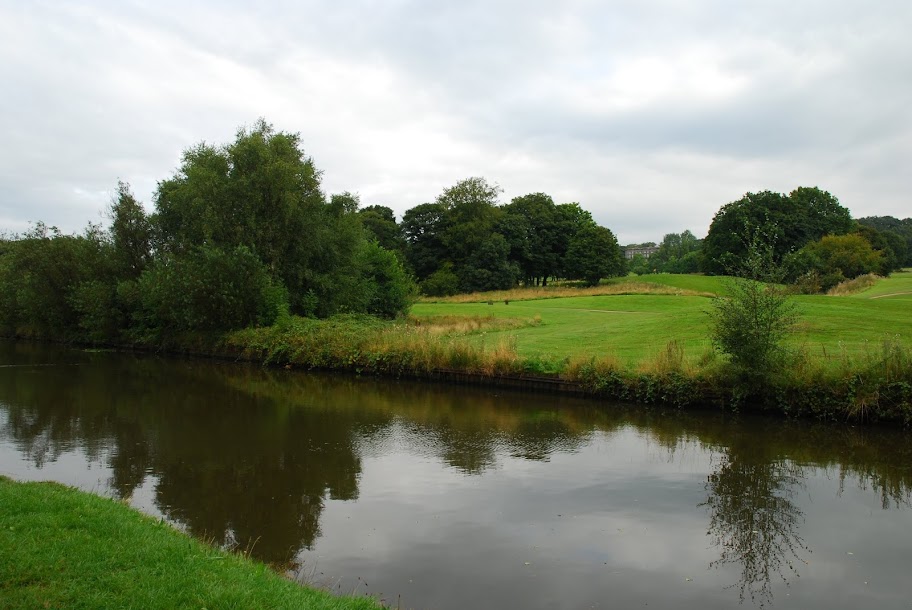 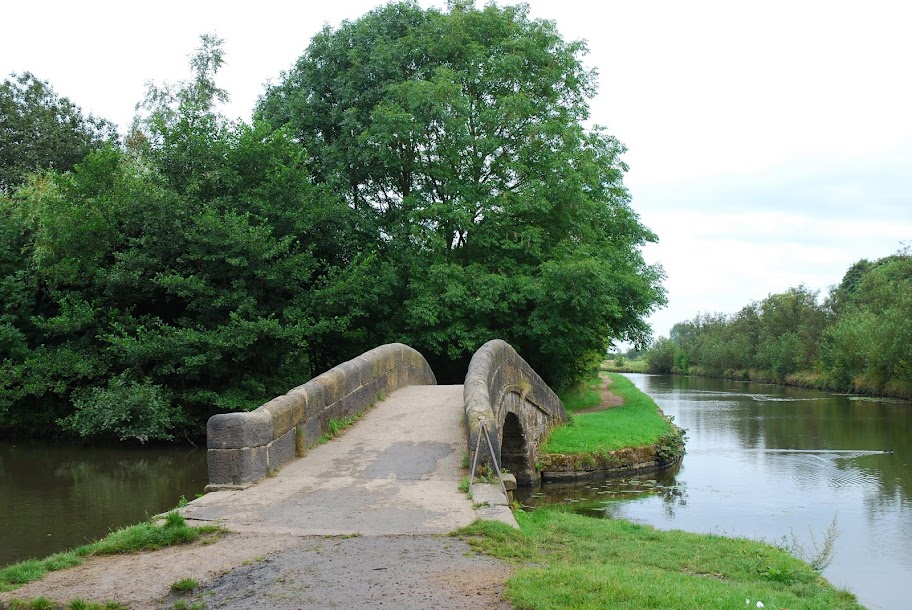 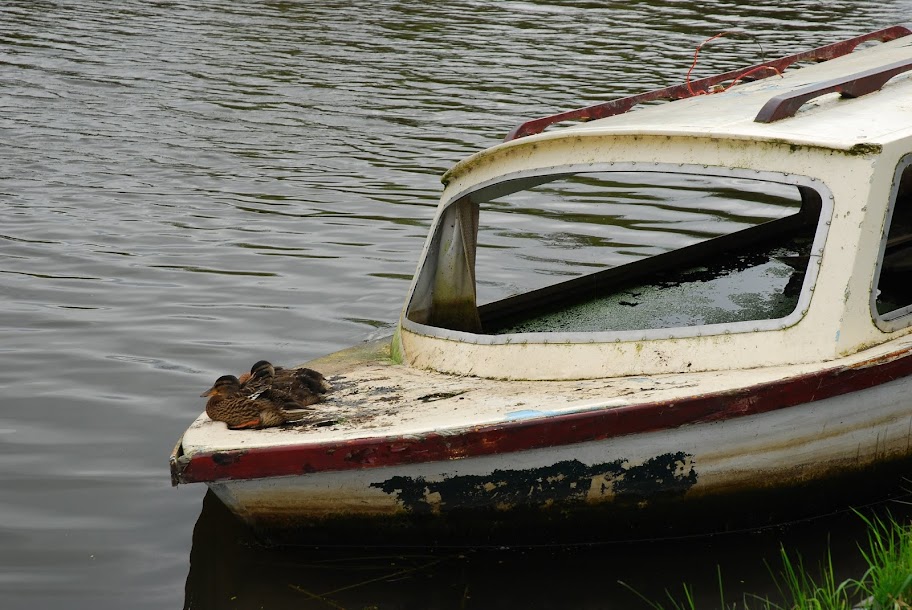 On the stretch up towards Adlington I fell in with another walker, a local guy whose grandfather had worked as a boatman, who pointed out relics of the industrial past on the opposite bank – here was where coal was loaded, there signs of the textile industry; that house was once a pub that served the bargemen, and there was where the original railway line to Blackburn ran. 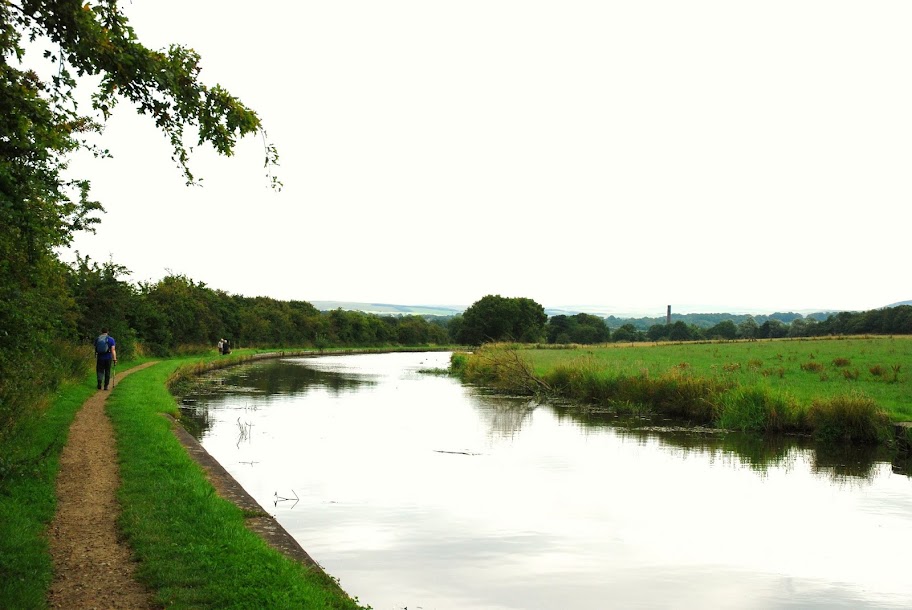 Approaching Chorley a 150-year-old spinning mill has been converted into a retail and leisure destination called Botany Bay. It has 5 floors selling collectables, furnishings, memorabilia, furniture and gifts. 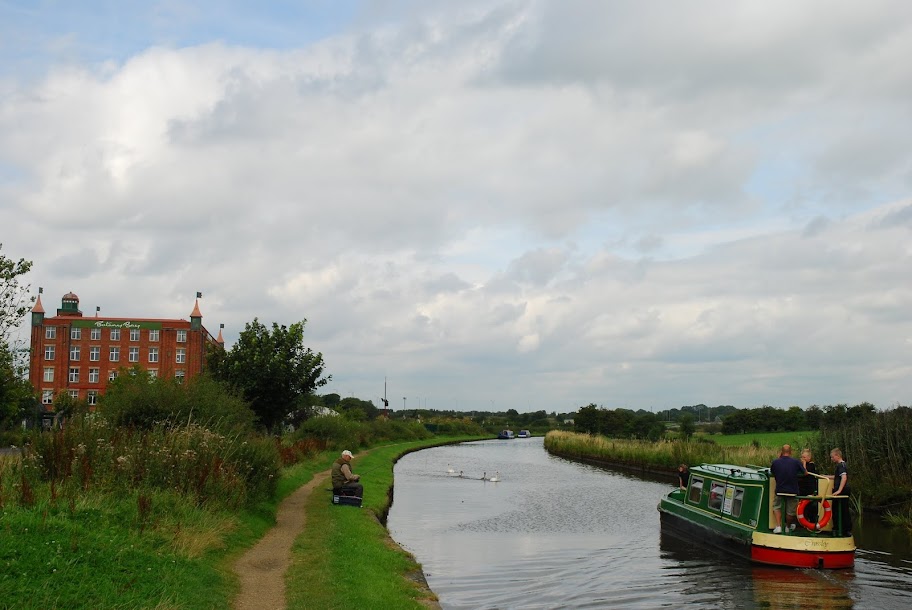 There’s plenty of it anywhere along the canal, but on the Chorley to Blackburn stretch it was particularly marked: the magnetic attraction of the waterside for new housing developments. This was a striking example, just below the start of the locks at Johnson’s Hillock: 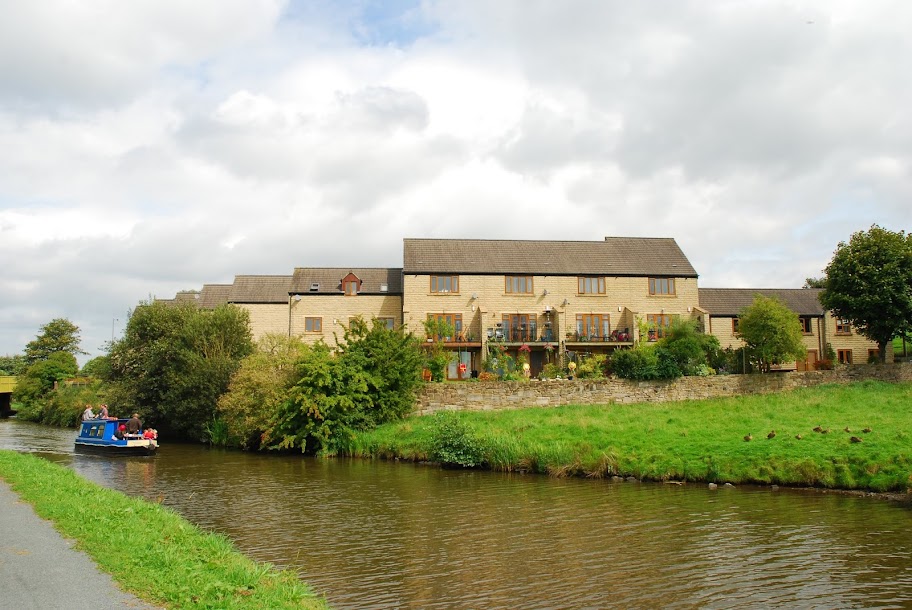 I worked my way up the locks at Johnson’s Hillock and stopped for lunch at the Top Lock pub. 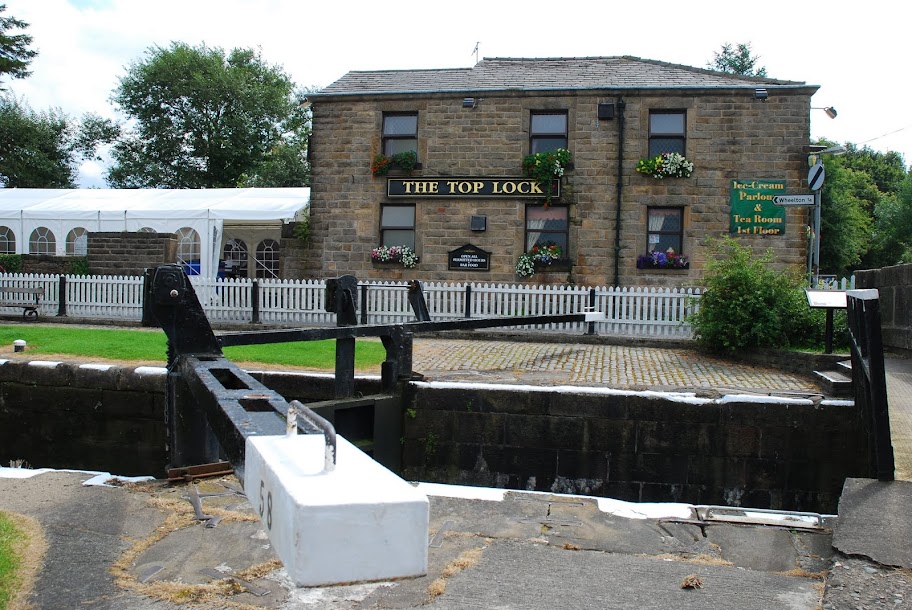 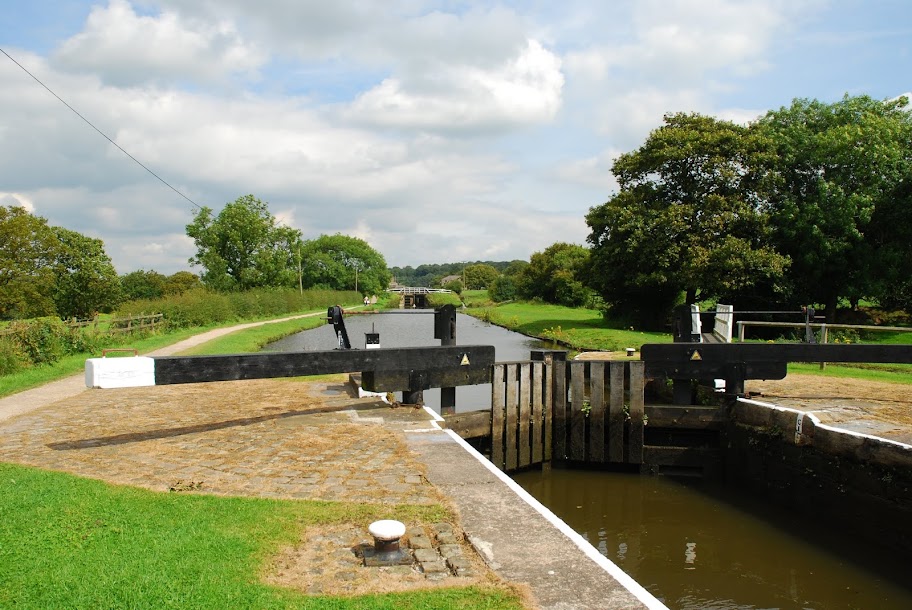 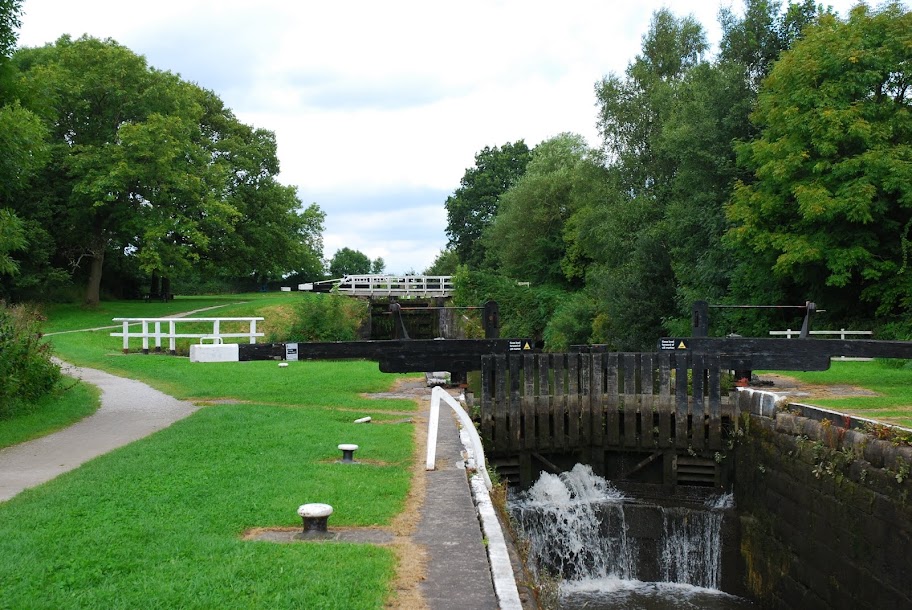 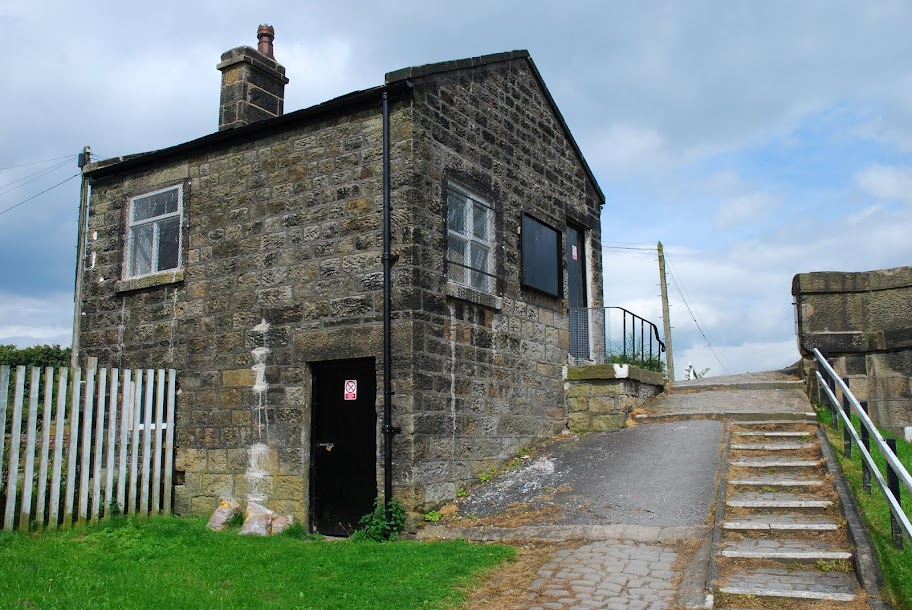 The canal now turns northeast and flows along a secluded and often densely wooded valley at a height of over 350 feet above sea level. After a short while I reached Withnell Fold –  a 19th century model village built to house workers at the paper mill, now demolished apart from its chimney. 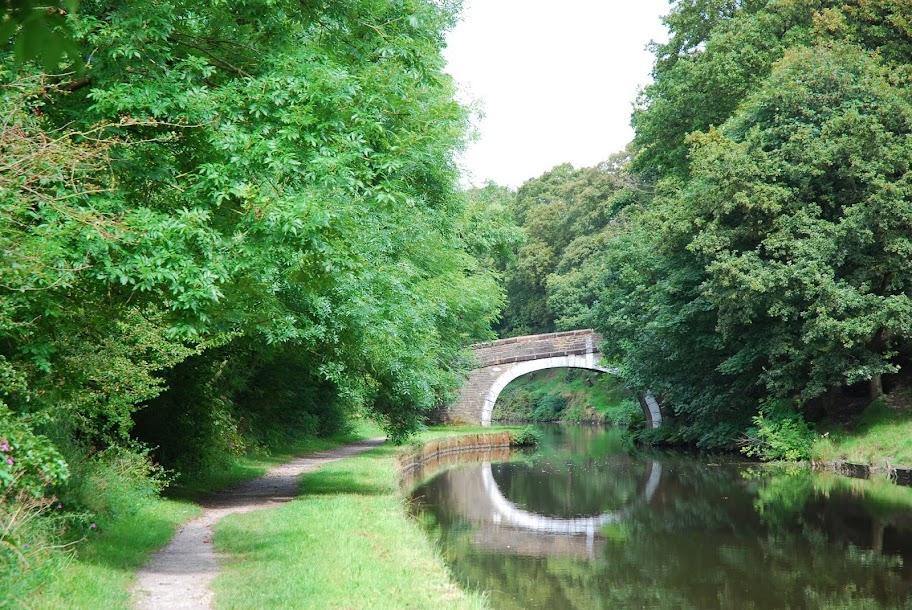 As the industrial revolution of the 19th century expanded, more mills and workers were needed. Sites for these mills were largely dependent on a water supply and transport systems to bring raw materials in and produce out. Some mills were too far from centres of population so ‘colony’ villages had to be built nearby to house the workers: Withnell Fold village and Paper Mill were built on a green-field site in 1843. The owner and builder was Thomas Blinkhorn Parke (1823-1885), the son of Robert Park, a local Cotton Mill owner. 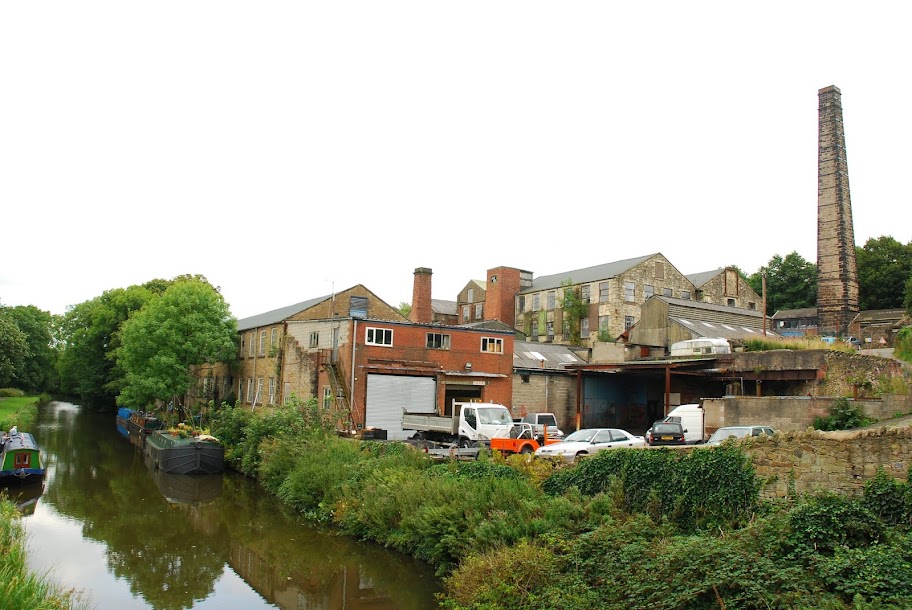 The Reading Room was built by Thomas Parke’s son, Henry and opened on 4 Oct 1890 for the benefit of the mill workers and their families. It was equipped with a billiard table, reading room with current periodicals, and upstairs a stage and concert hall with a sprung dance floor. Henry Parke wanted the building to ‘help young men gain general knowledge and help introduce less indifference to social questions’. He was a local benefactor and two of his best known achievements were to fund the first Public Library in Chorley in 1899 and also build Brinscall Baths (the first Public Baths in the area) in 1911.  A sculpted tree trunk represents T.B. Parke, founder of the villlage. 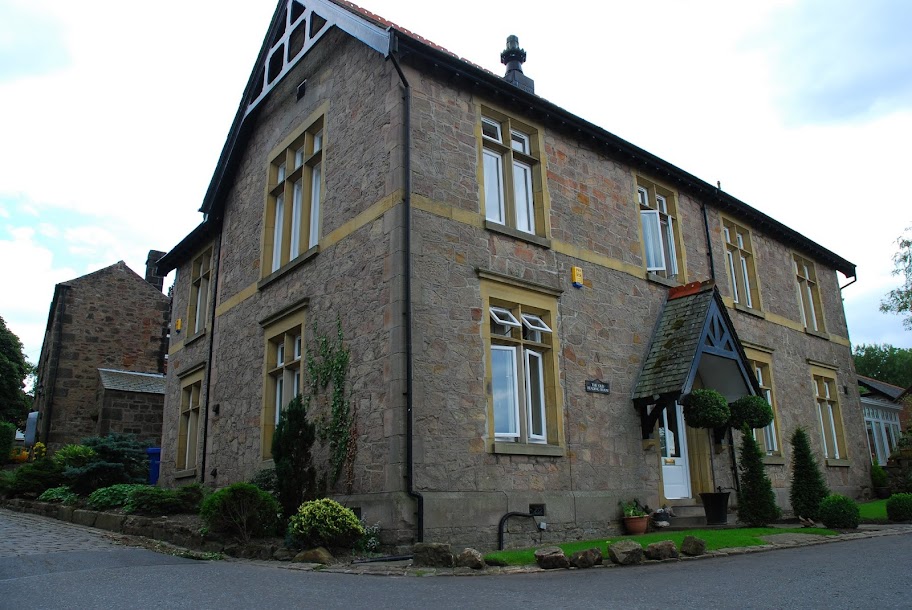 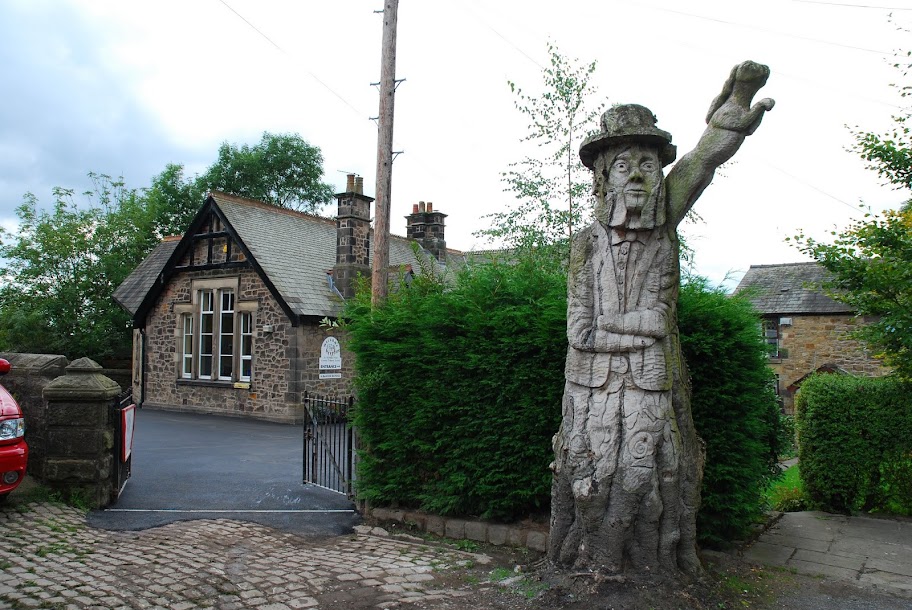 The village school was also built by Henry Parke. The date-stone to the right of the main entrance door reads HTP 1897, his initials. 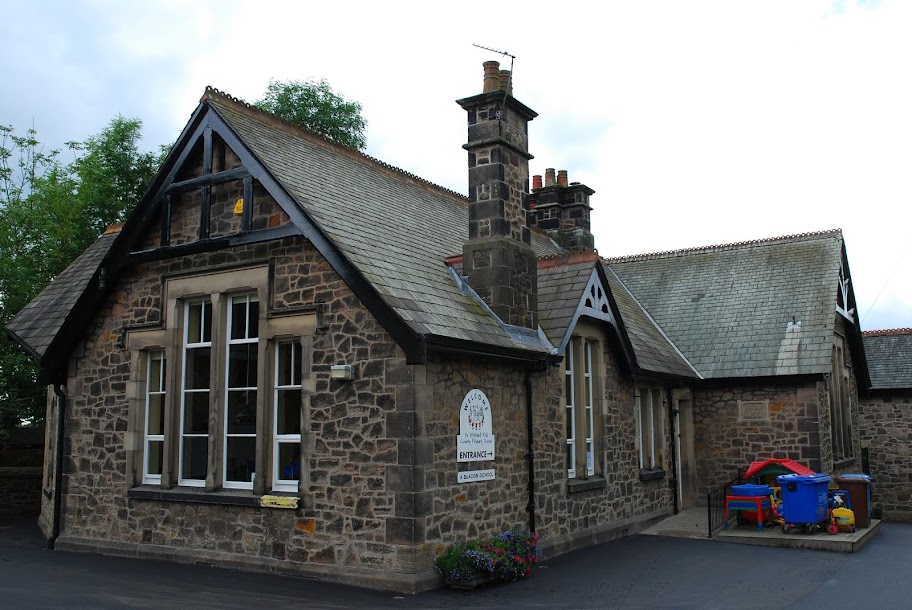 The terraces of stone cottages in the village square were built in 1843. 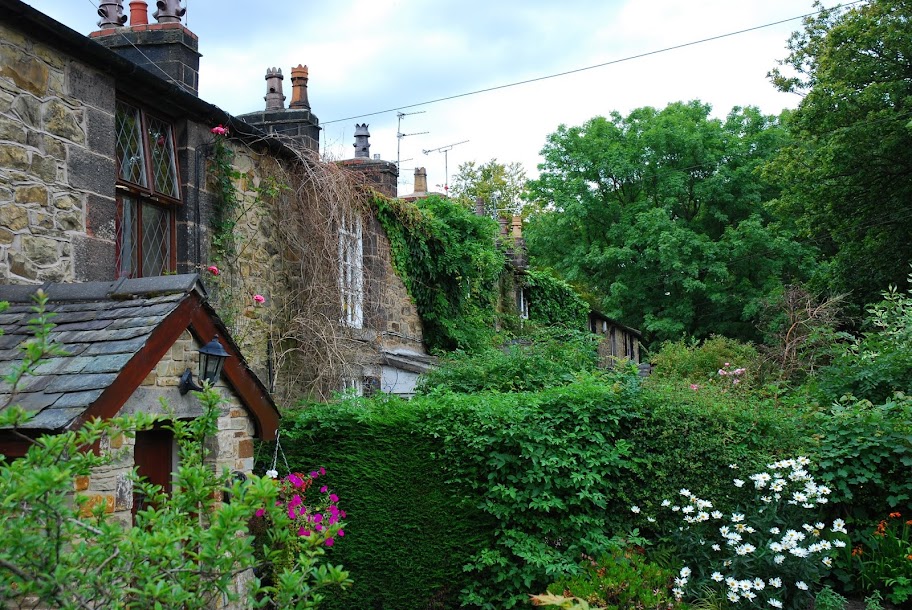 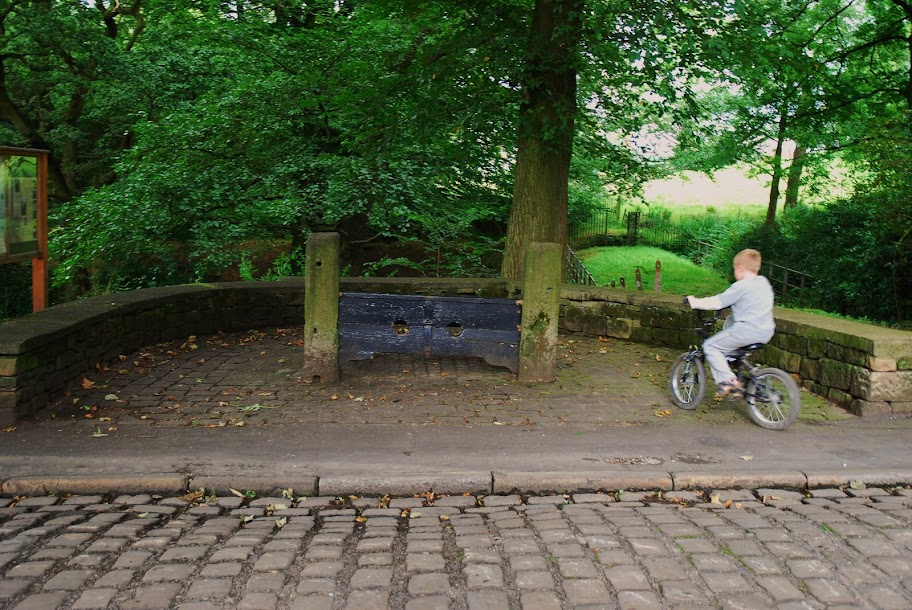 Withnell Fold Methodist Church is one of the later buildings to be constructed. It was built by Thomas Blinkhorn Parke in 1852 as a day school and Chapel combined. 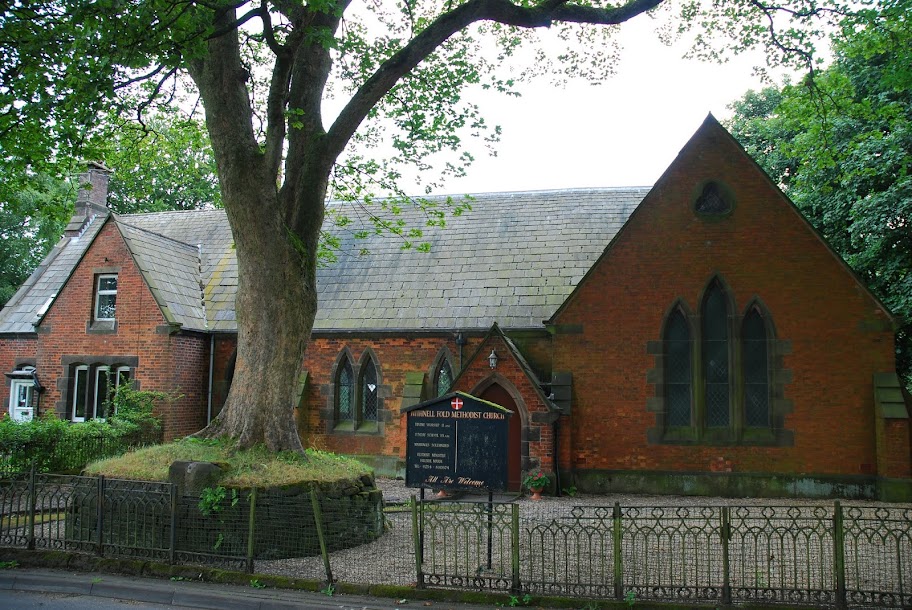 I was musing over the many and varied names people give their canal boats – often something aspiring to a peaceful state of mind, a flower or a girl. But today I saw one named mirrlees and another called crossleys.  Strange – they’re both places where my Dad worked – Mirrlee’s manufactured diesel engines at Hazel Grove, near Stockport and Crossley‘s were a motor vehicle manufacturer he worked for in Openshaw. Whatever. Here’s a boat called Topaz. 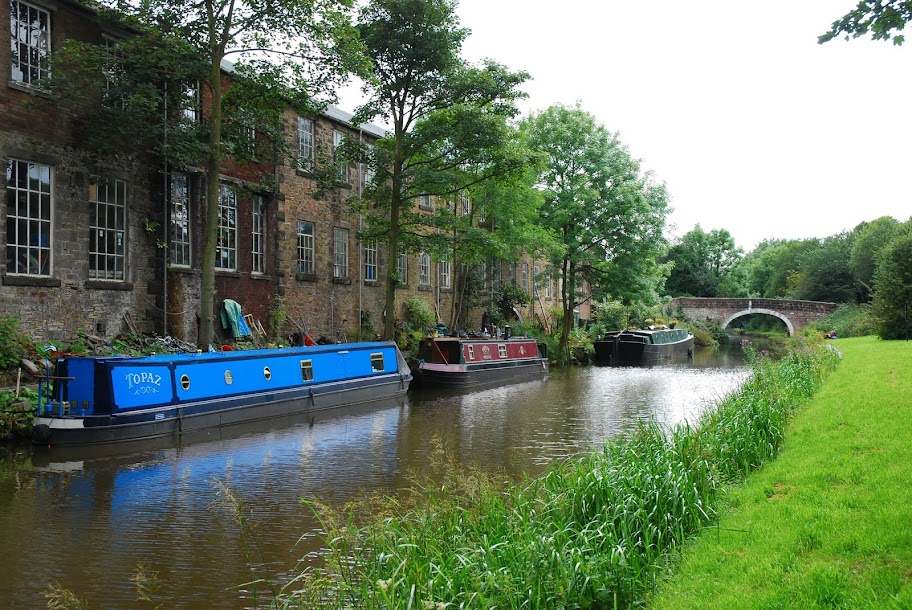 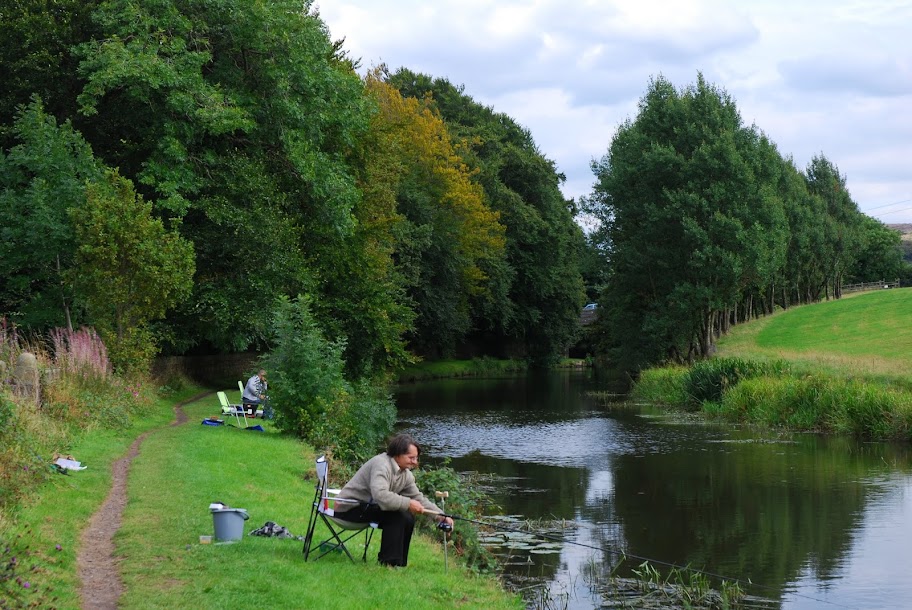 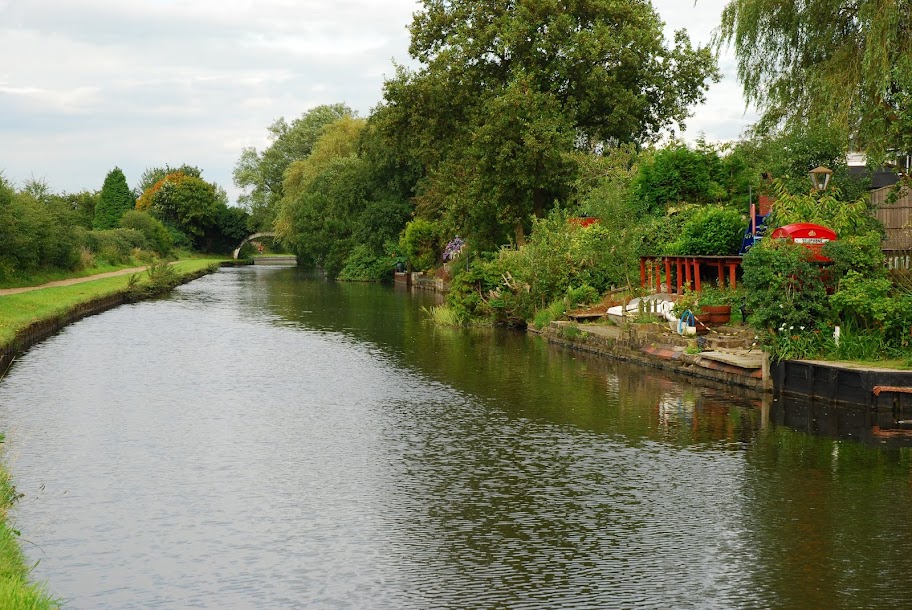 I trudged on towards Blackburn, the roar of the motorway constant on this stretch. At the Cherry Tree suburb, after roughly 16 miles I decided to call it a day and caught a bus back to Chorley that rattled through the stone-terraced hillside villages of  Withnell, Brinscall and Wheelton; then a bus to Wigan and finally the two-car diesel that rattled and screetched its way back into Liverpool. I’d reached the towpath at ten that morning; I got home for 7:30. All the public transport was dead on time. 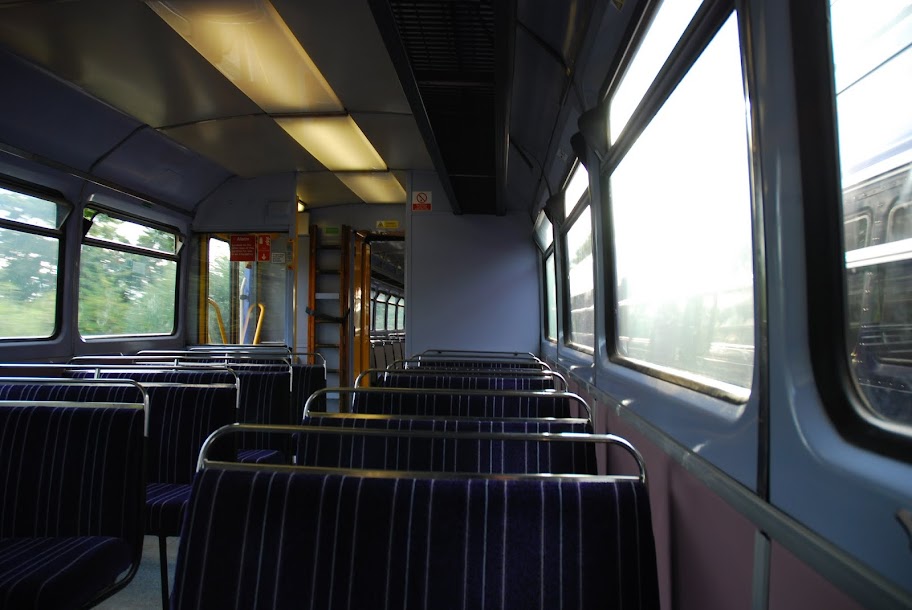 Next: Blackburn to Clayton-le-Moors

2 thoughts on “Walking the canal: Wigan to Blackburn”