Oumou Sangere: On the Waterfront

Saw Oumou Sangare put on an electrifying show at On the Waterfront last night – a short series of free concerts in the spectacular setting of the Pier Head plaza. In the one-hour set, Sangare performed songs from her recent album, Seya (Joy) with a stripped-down band consisting of drums,  djembe, kora, flute, ngoni, electric bass, and two young female backing vocalists who dance and twirl calabashes, one of whom Oumou introduced as her daughter.

On an evening when the rain of recent days thankfully held off, but with a chilly breeze whipping in off the river,  the band drove the beat forward from the first number, Oumou’s voice soaring over the interweaving pulses and beats. One of the features of the set was how Oumou engaged directly with the audience, using French and her ‘not so good’ English to explain the lyrics of her songs. She is a champion of women’s rights, and she was at pains to get across how her songs express the problems that women face on a daily basis because of polygamy and arranged marriage in Mali, but also  the importance of love, the pain of exile, and the frailty of human life. 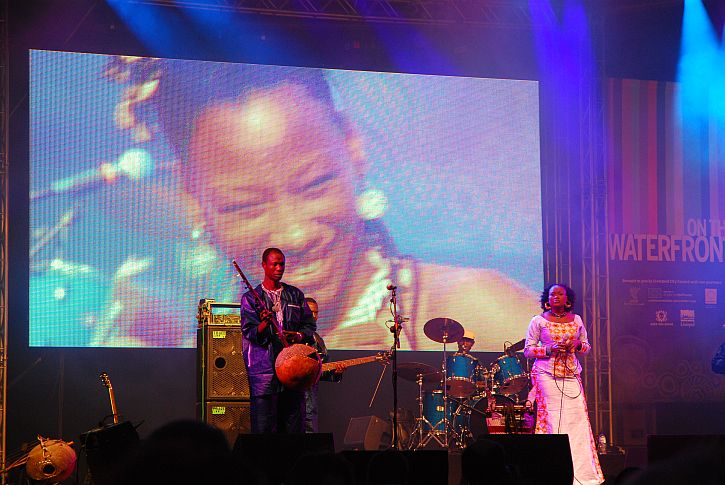 The whole performance was relaxed and joyous, ending with an extended introduction, by Oumou, of each member of her band, bringing them to the front of the stage hand on their shoulder. Introducing the djembe player, she aked if anyone in the audience could play the hand drum; several hands went up and she invited one guy up on stage to briefly demonstrate his skill.

Oumou’s songs are expressions of her own philosophy and wisdom, born from her experience growing up in a poor family in Bamako and being catapulted to stardom at only the age of 21. She has brought to the world the hauntingly beautiful music of her homeland: wassoulou.

Wassoulou music is based on the song and dance traditions of Wasulu, a remote and densely wooded region in southern Mali. In the 1950s, in the villages, the youth created this style out of the songs of the ancient hunters’ societies and made it their own. At first, the elders opposed it furiously, comparing the main instrument, the six-string harp, to a bed bug because of its nervous rhythms that made young people dance frenetically as if bitten. But by the late 1970s wassoulou had begun to emerge as a new popular style in Bamako among migrant communities from the region. It had strong, hypnotic dance rhythms and the lyrics talked about general aspects of life in contemporary Mali. But Sangare took all this much further with her debut album, Moussolou (Women).

Not only was there a new bold rhythm and musical colour but she also had a personal mission: to improve the subservient position of women in Mali.Her songs talked openly about subjects that had never before been expressed in public in a fundamentally conservative society, such as female sensuality, in her stunning hit song Diaraby Nene (The Shivers of Love).

This summer I’ve been listening to her great new album Seya (Joy).  This review from Pitchfork:

Sangaré gets a hand from a whopping 47 collaborators on the album, including master guitarist Djelimady Tounkara, Fred Wesley, Pee Wee Ellis, and Tony Allen. Most appear on a track or two, and mixed in with all the electric guitar, bass, flute, sax, and trap drums are a host of traditional Malian instruments, including the ngoni (a cousin of the guitar and banjo), the balafon (a type of marimba), and an arsenal of drums and percussion that give the album a diverse and always interesting rhythmic base. It opens with a blast of rhythmic balafon and dives into a fractured groove topped with an arcing flute, as Sangaré sings a forceful appeal for women’s equality in society and the home. Women’s rights are an issue she’s built her public life and much of her music around, and it’s a theme that crops up across the album.

“Wele Wele Wintou” sets dark female harmonies against a sharp sax theme behind Sangaré’s rapid-fire vocal, which speaks out against forced marriage. Subtle wah guitar burbles through the verses, and Tounkara takes one of the most unusual solos I’ve heard, playing far down the neck with a dark, blunt tone. You could probably listen to just the instrumental backing tracks to most of these songs and come away satisfied by the richness of the interlocking rhythms and the subtle harmonic shifts. Even slow tracks like “Senkele Te Sira”, which features another brilliant guitar part from Tounkara, have a dynamic, vibrant character that perfectly matches Sangaré’s sometimes towering vocals. She knows how to accent a phrase, unleashing a powerful wail at key moments to drive home a thought in a way that makes her passion clear in any language.

And this from the BBC:

Seya traverses a wide range of moods, from confident and celebratory to more austere, stripped down meditations. And while few artists give as good a groove as Oumou, the latter are often the best settings to appreciate her extraordinary voice; if Aretha Franklin had grown up in Bamako, she might have sounded something like this.

Apart from the declamatory Donso – an adaptation of a traditional Wassoulou hunter’s song – the material is all original as usual, and the basis of her distinctive sound remains the twitching, funky sound of the kamel n’goni(‘youth harp’), mostly played by ‘Benogo’ Brehima Diakité. But with fifty musicians taking part, there’s more variety of sounds and textures than ever. She’s used electric guitar before, but never with the kind of squealing rock treatments heard on Senkele Te Sira and Kounadya, which also features a great retro Hammond organ solo by co-producer Cheick TidianeSeck. There’s brass and the occasional deft use of strings, as well as guests such as flautist ‘Magic’ Malik Mazzadri and drummer Tony Allen, but none are allowed to overshadow the star.

Though it’s difficult to pick highlights from such a consistent album, the driving opener Sounsoumba and the radiantly joyful title track, with its lovely swooping chorus vocals, are the most instantly appealing of the more upbeat pieces.

One thought on “Oumou Sangere: On the Waterfront”