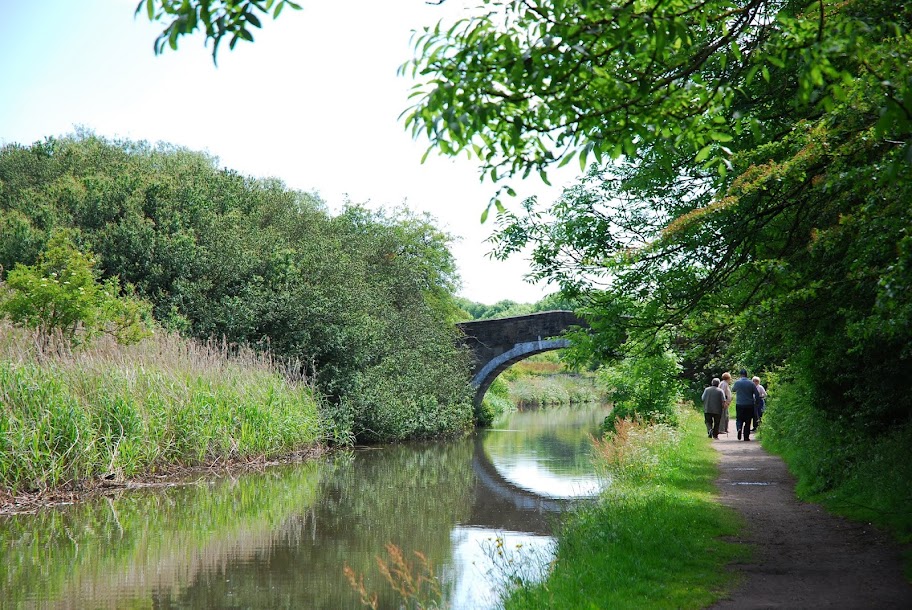 For the first hour of this walk, the canal follows the valley of the river Douglas. The landscape changes after Parbold: we leave behind the Lancashire flatlands and move steadily towards higher ground. Up to Appley Bridge this is a lovely stretch, with the Douglas twisting alongside the densely-wooded canal through the valley surrounded by rolling hillls. It’s also the busiest stretch so far – bustling with cyclists, walkers, narrowboats, canoes and a school party of hikers. 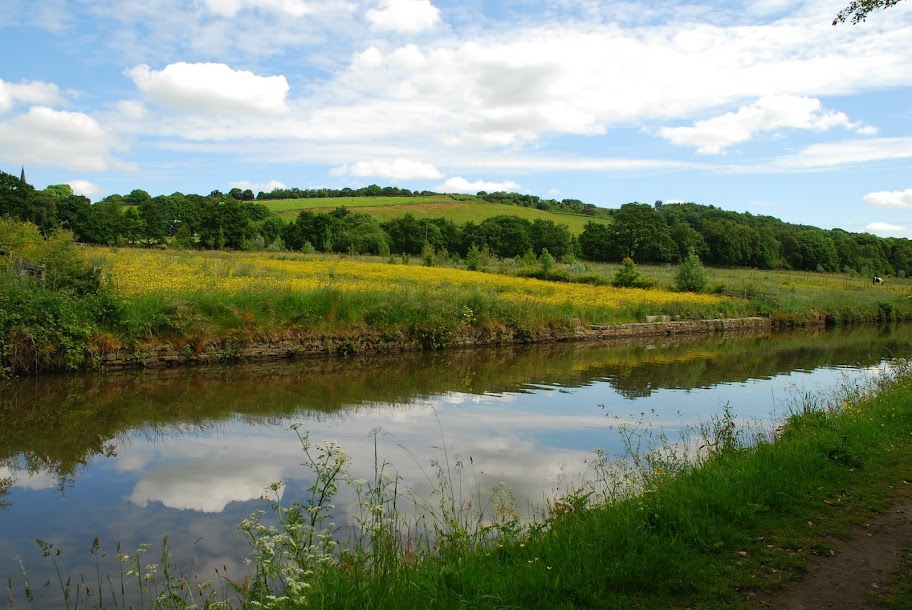 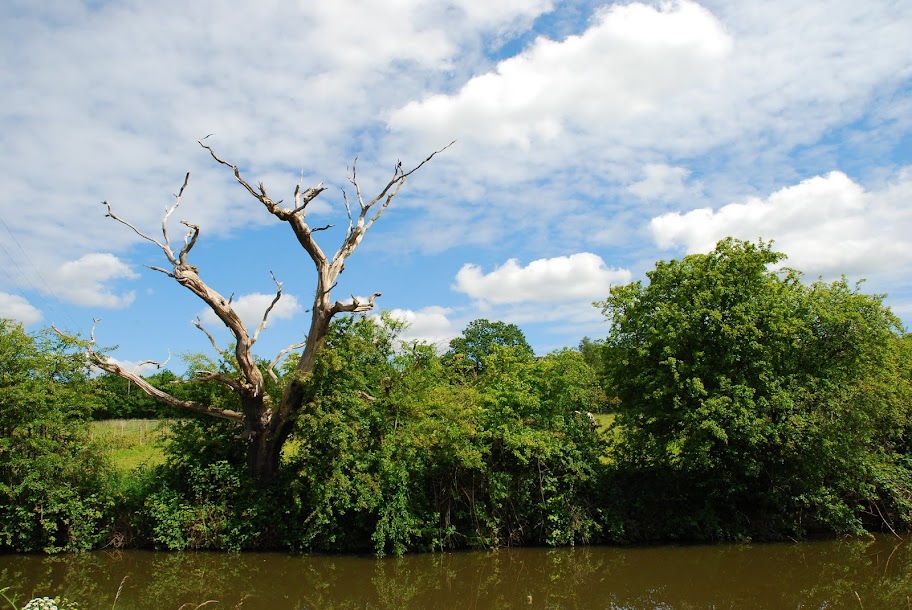 The river Douglas, a tributary of the Ribble, rises on Winter Hill on the West Pennine Moors, and flows for 35 miles through the town centre of Wigan and into the Ribble estuary. Walking through the valley is to go back to the early period of canal-making when rivers like the Douglas were canalised, these navigations being the forerunners of the canal-building boom that began barely four decades later. 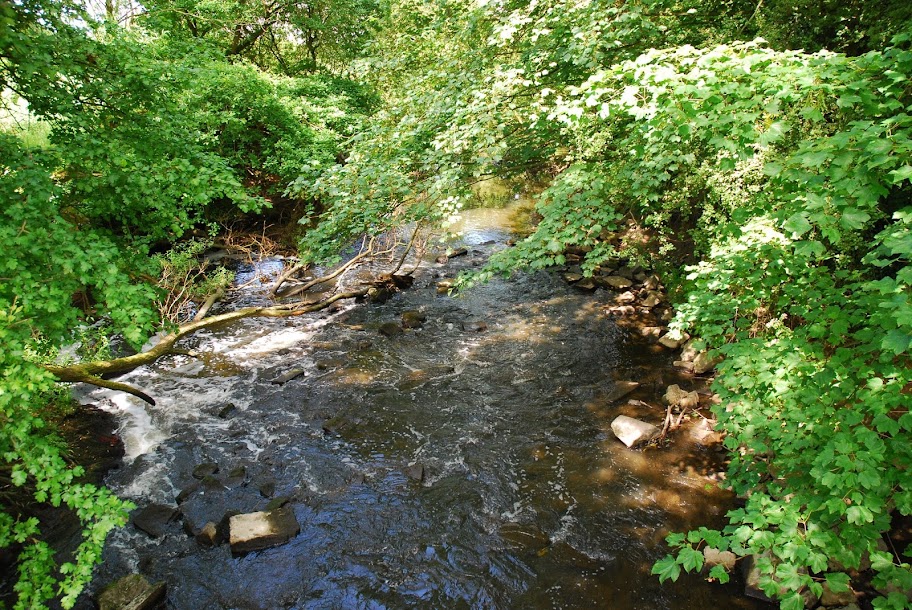 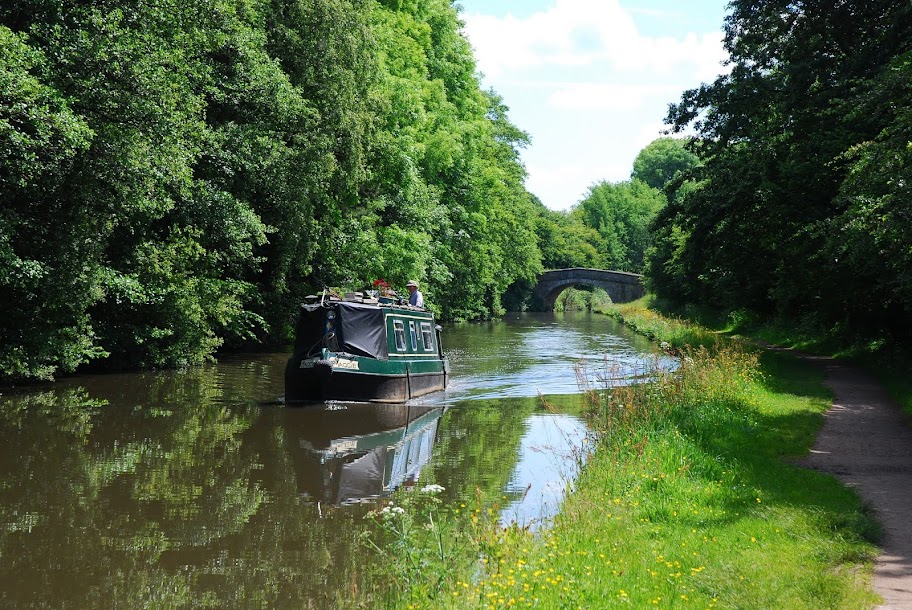 In 1712, Thomas Steers, the engineer who built Liverpool’s first dock, surveyed the Douglas and recommended that it be made accessible to ships, enabling the transport of coal from the coalfields around Wigan down to the Ribble, and onwards to Preston. The canalisation of the river was authorised by Parliament in 1720 and involved the construction of 13 locks. The navigation opened in 1742 but was bought out by the Leeds and Liverpool Canal Company in 1780 and abandoned by 1801, by which time the canal provided a better route to the River Ribble.  Although abandoned for 200 years, traces of the navigation, including the remains of several locks, can apparently still be seen between Parbold and Gathurst. 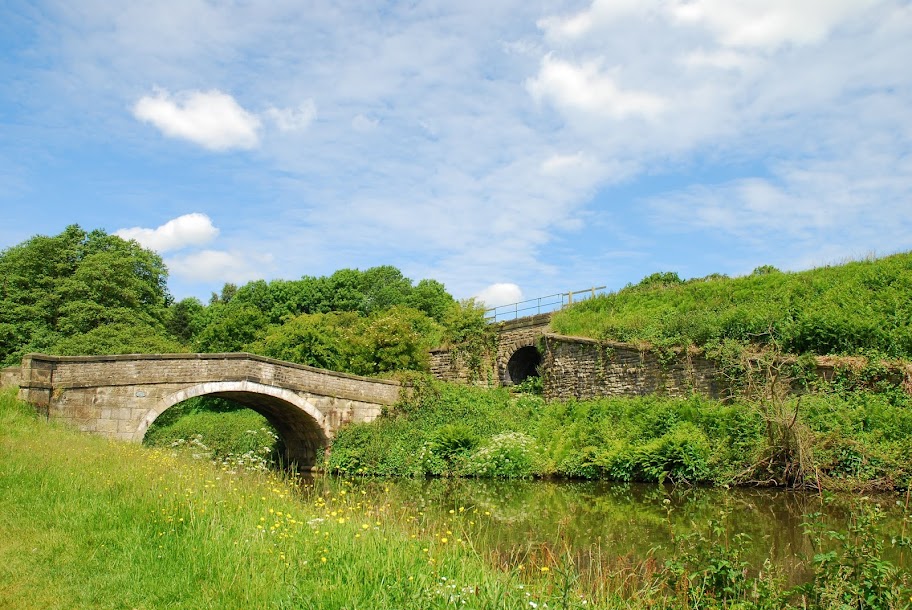 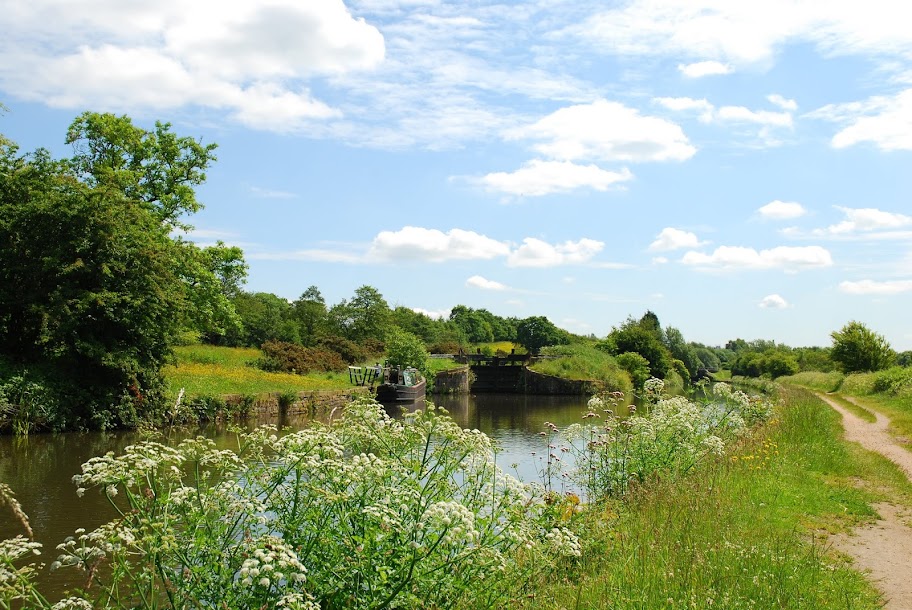 And history moves on: the canals were soon superseded by the railways.  Walking this stretch, you are reminded occasionally of this as, behind the trees, a train clatters past on the line, opened in the 1850s,  that follows the course of the canal through the valley. 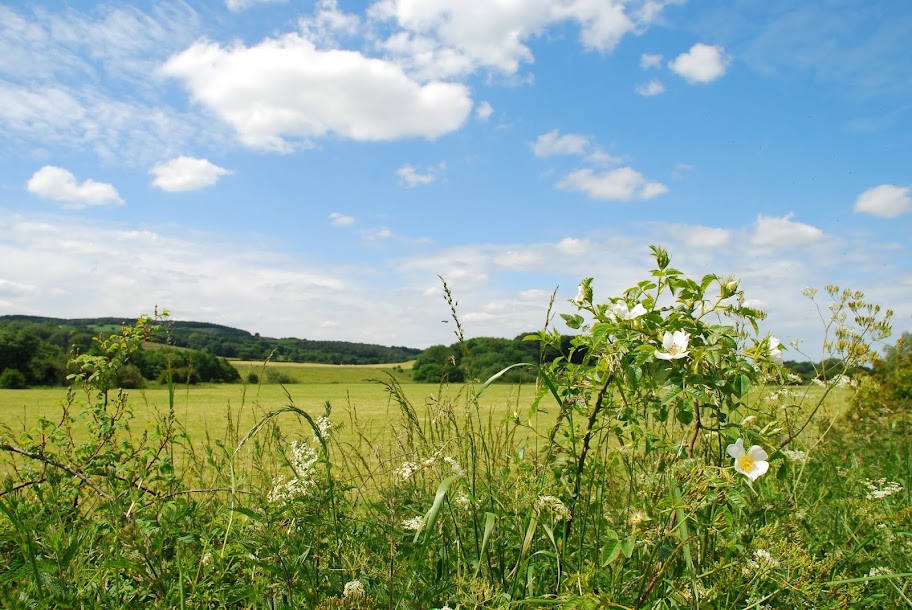 In the hedgerow there are scentless wild roses or dog roses, another maligned wildflower, regarded as a weed (‘canker blooms’, they were known as in Elizabethan times) and inferior to the fragrant garden rose. Shakespeare’s Sonnet 54 hinges on that comparison: the scent of the garden rose is the true mark of its beauty, and stands for the inner qualities of the “lovely youth”. Nobody prizes the dog rose, which is all outward show, but the true rose outlives itself, in that its petals can be used to make fragrant rosewater or as a perfume: ‘Of their sweet deaths, are sweetest odours made’.

O! how much more doth beauty beauteous seem
By that sweet ornament which truth doth give.
The rose looks fair, but fairer we it deem
For that sweet odour, which doth in it live.
The canker blooms have full as deep a dye
As the perfumed tincture of the roses,
Hang on such thorns, and play as wantonly
When summer’s breath their maskèd buds discloses:
But, for their virtue only is their show,
They live unwoo’d, and unrespected fade;
Die to themselves. Sweet roses do not so;
Of their sweet deaths, are sweetest odours made:
And so of you, beauteous and lovely youth,
When that shall fade, my verse distills your truth. 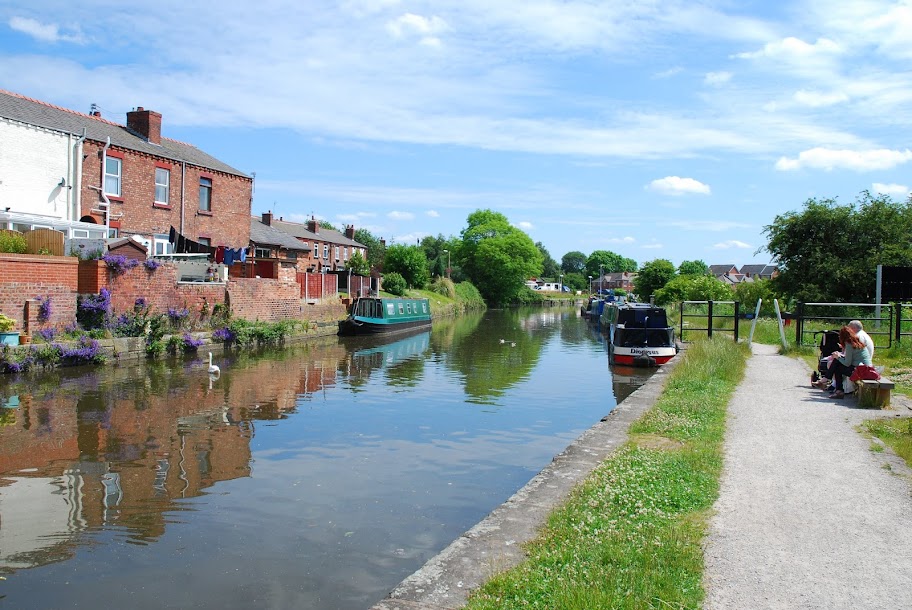 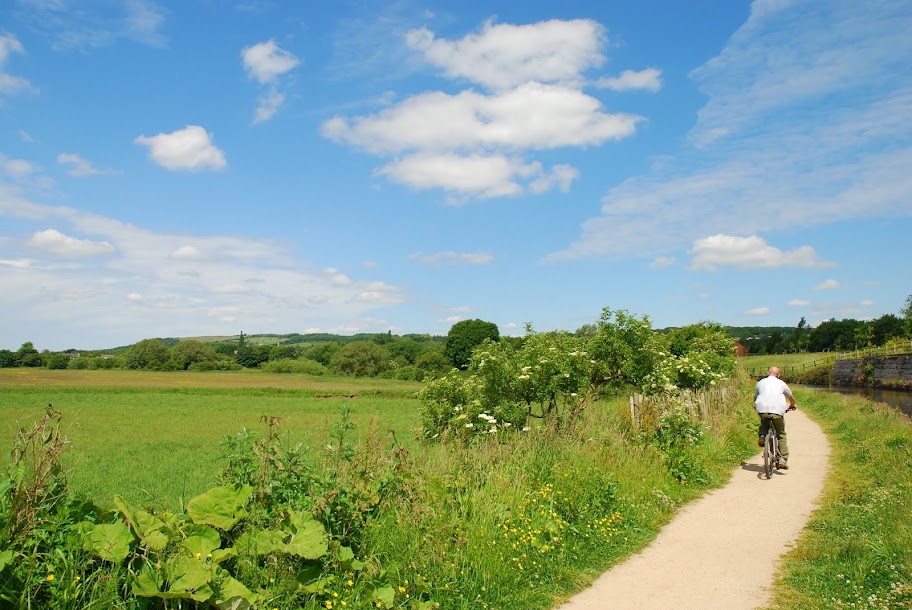 Appley Bridge is a small hamlet which was once quite industrial, with several quarries and clay pits for the Wigan brick company. 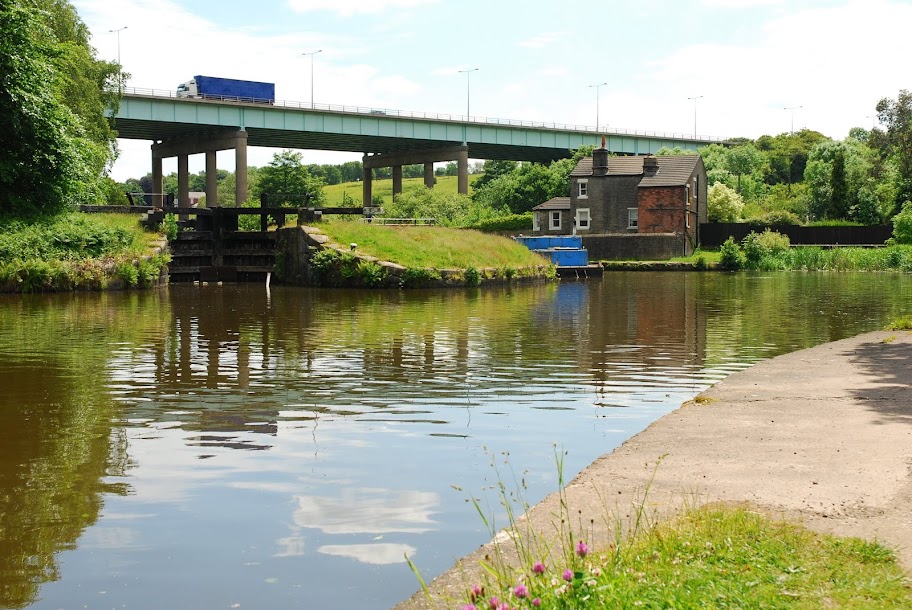 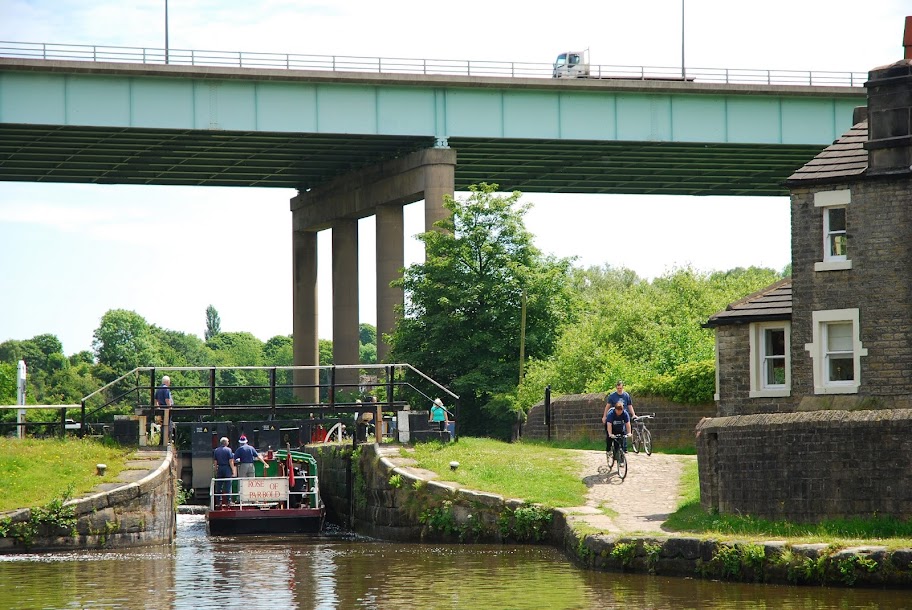 Just beyond Appley Bridge the canal passes under the M6 motorway, so this stretch has offered several layers of transport technology –  from 18th century river navigation and then canal to 19th century railway and 20th century motorway. 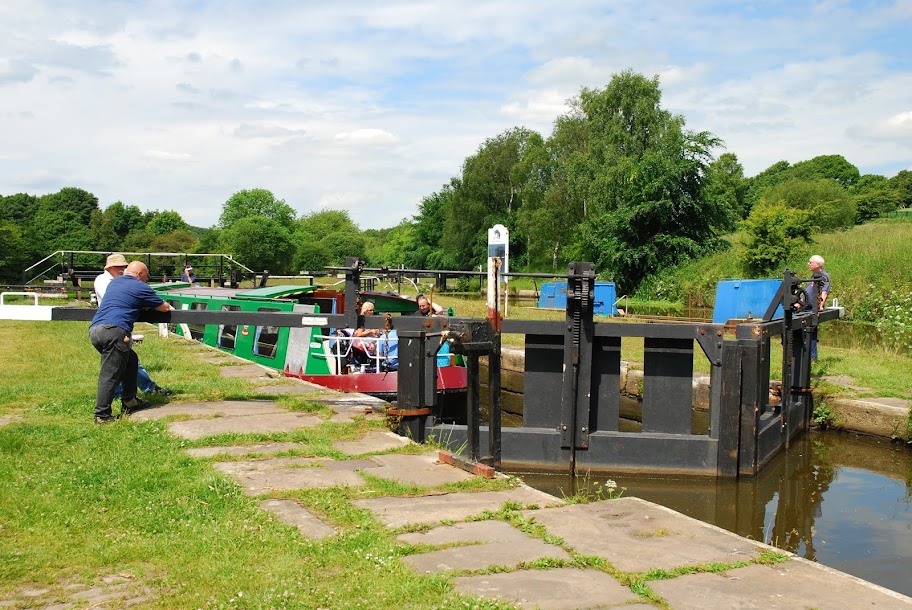 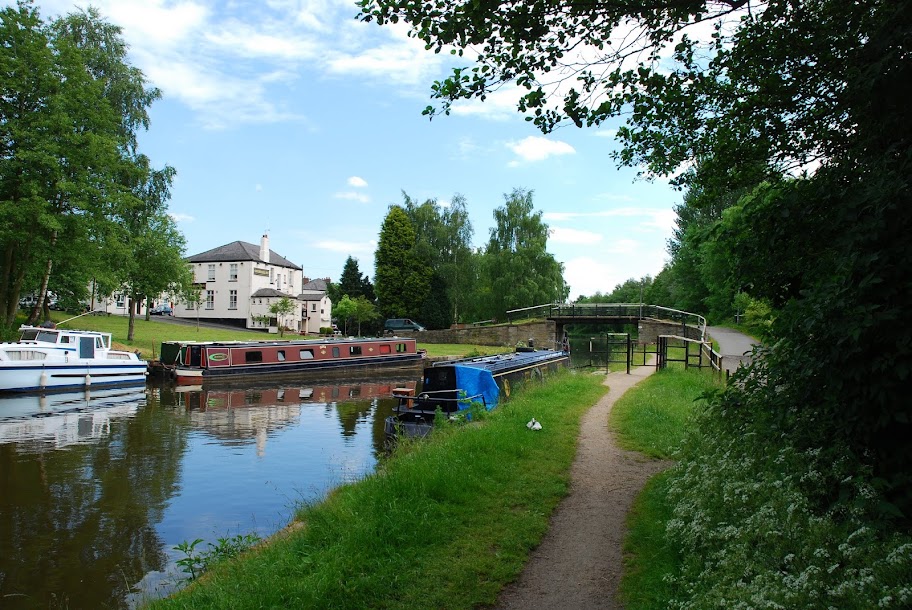 Beyond Gathurst lies Crooke where I expected to be able to get a pint and a bite to eat at the Crooke Hall Inn.  But oddly both this and the next canalside pub were closed, with signs indicating they only opened at 2.00. Very strange! 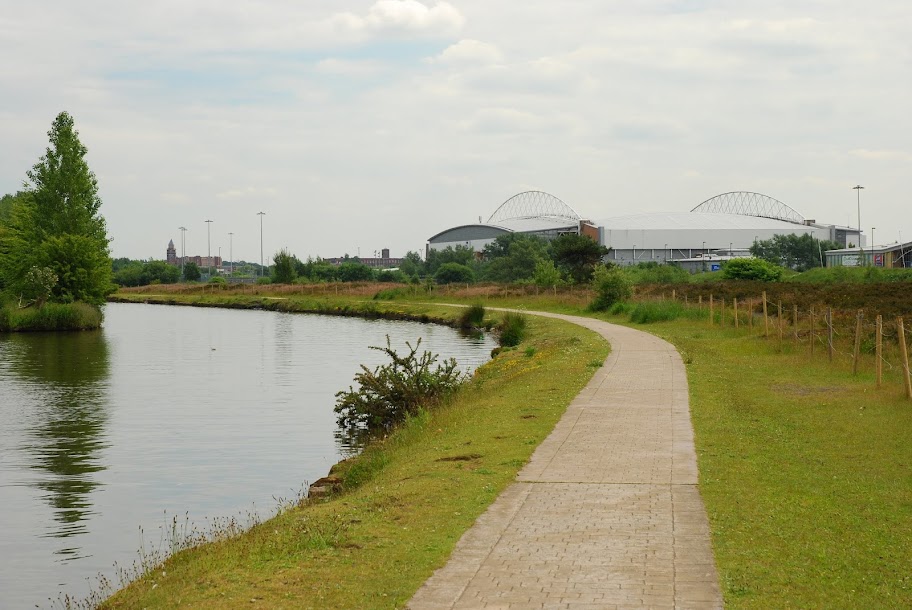 So I had to contine along the rather dreary stretch into Wigan, through wasteland and industrial units, passing the JJB stadium where Wigan Athletic play.  Now, I thought, I’ll be able to get a lunchtime pint at the Orwell on Wigan Pier, a CAMRA pub of the year.  But it was not to be. I arrived to find the place shuttered and empty – it  closed in January 2009.  A converted three-storey grain warehouse, The Orwell was seen as a key feature of the Wigan Pier redevelopment when it opened as a national tourist attraction in 1985. But the venue had struggled with the credit crunch, the decline in the pub trade and, particularly, the closure of the other major Wigan Pier attraction last summer:  the museum of Victorian life, The Way We Were. 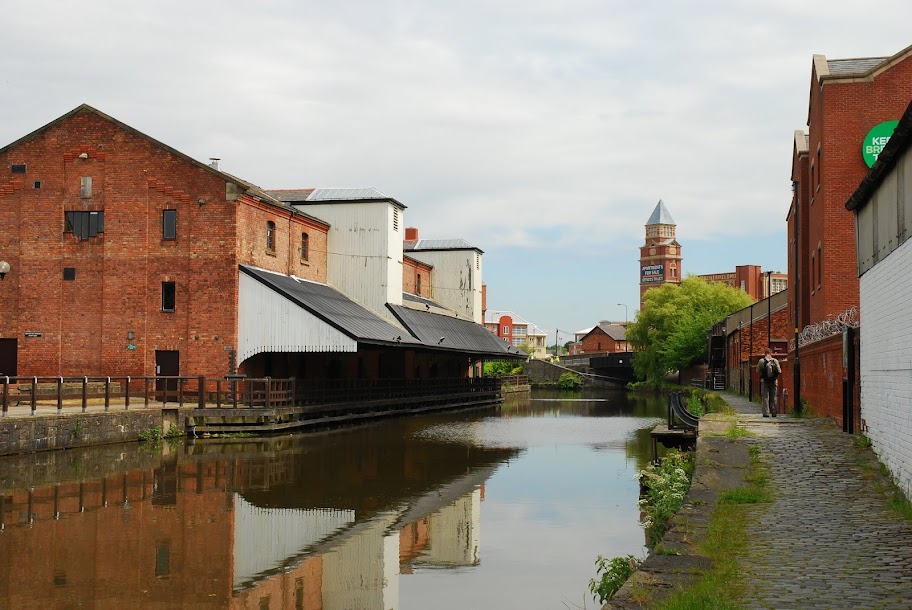 It seems that Wigan Council have pulled the plug on funding for these venues and has plans (if the credit crunch allows) for other developments here. The council argues that the heritage industry is not the draw it once was. Visitor numbers had been declining whilst the council subsidised the attractions at the Pier to the tune of £1.3m a year. The council now believes that the Pier’s future lies in a gradual move towards a cultural quarter for the 21st century rather than a series of heritage attractions looking back at the last century. 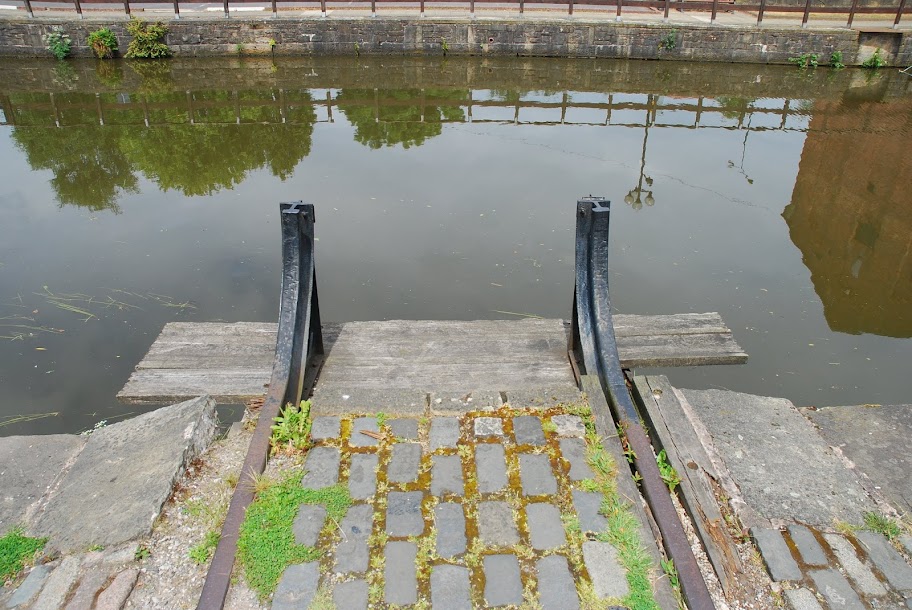 The original ‘Wigan pier’ was a tippler where wagons from a nearby colliery were unloaded into waiting barges on the canal. It was demolished in 1929. The pier joke is thought to have originated in a music hall act performed by George Formby Senior in which he talked of Wigan Pier in the same terms as the seaside pleasure piers in Blackpool and Southport. The replica tippler seen above was erected on the site of the old one when the area was redeveloped. 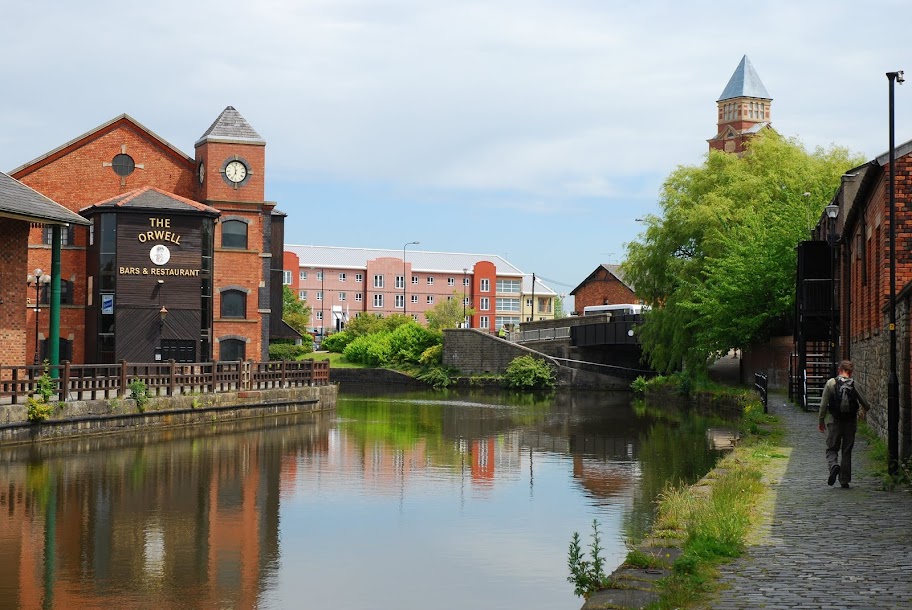 In 1937, Wigan Pier was immortalised in the title of George Orwell’s Left Book Club account of unemployment and desperate living and working conditions in the northern industrial areas. In the book, Orwell responded to criticism from the Manchester Guardian of ‘his wholesale vilification of humanity’. On the contrary, he says:

Mr. Orwell was set down in Wigan for quite a while and it did not inspire him with any wish to vilify humanity. He liked Wigan very much — the people, not the scenery. Indeed, he has only one fault to find with it, and that is in respect of the celebrated Wigan Pier, which he had set his heart on seeing. Alas! Wigan Pier had been demolished, and even the spot where it used to stand is no longer certain.

In another passage Orwell writes:

I remember a winter afternoon in the dreadful environs of Wigan. All round was the lunar landscape of slag-heaps, and to the north, through the passes, as it were, between the mountains of slag, you could see the factory chimneys sending out their plumes of smoke. The canal path was a mixture of cinders and frozen mud, criss-crossed by the imprints of innumerable clogs, and all round, as far as the slag-heaps in the distance, stretched the ‘flashes’ — pools of stagnant water that had seeped into the hollows caused by the subsidence of ancient pits. It was horribly cold. The ‘flashes’ were covered with ice the colour of raw umber, the bargemen were muffled to the eyes in sacks, the lock gates wore beards of ice. It seemed a world from which vegetation had been banished; nothing existed except smoke, shale, ice, mud, ashes, and foul water. 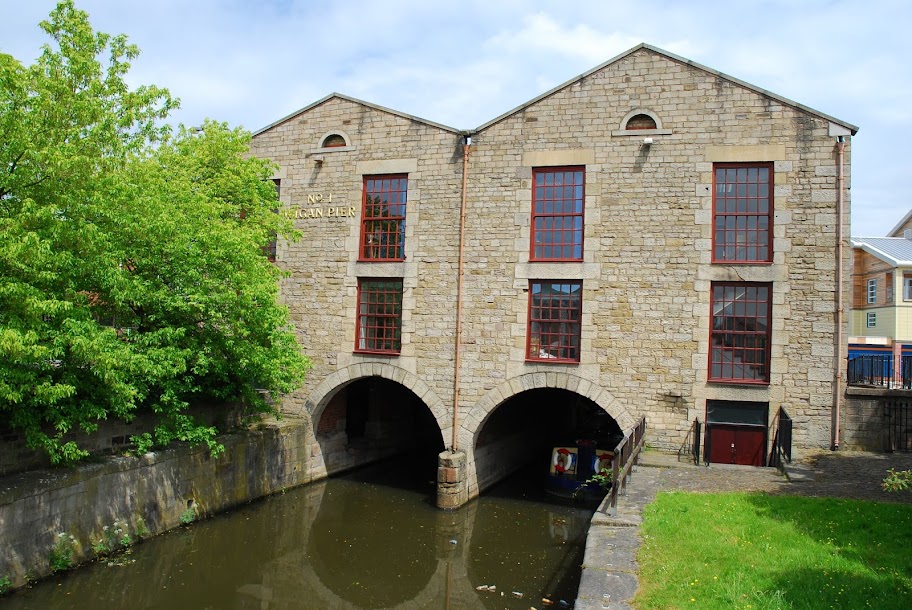 The Wigan Terminus Warehouses (above) were built in 1777 and refurbished in the 1980s. For a while this was the end of the canal: barges could moor inside the building and off-load directly into the warehouse.

I’d imagined that Wigan only emerged as a township with the industrial revolution, but as early as the 13th century it was one of four boroughs in Lancashire with Royal charters, the others being Lancaster, Liverpool, and Preston. During the Industrial Revolution Wigan experienced dramatic economic expansion and a rapid rise in the population. Although porcelain manufacture and clock making had been major industries in the town, Wigan now grew as a major mill town and coal mining district.

Here’s a painting that evokes that period: The Dinner Hour – Wigan is one of the few paintings by Eyre Crowe that is well known today, and one of the few paintings of his on public display (at Manchester Art Gallery). It is likely that the painting was inspired by a visit to the cotton mill shown in the picture – Thomas Taylor’s Victoria Mills in Wigan – during one of Crowe’s trips around the provinces in his capacity as an Inspector of Schools of Art. The verdict of some modern critics is that it is the ancestor of the Northern townscapes of L.S. Lowry, who also painted Wigan scenes, including one of the Wigan Coal & Iron Works which was auctioned in 2008.

The first coal mine had been established at Wigan in 1450, but by the 19th century there were 1,000 pit shafts within 5 miles of the town centre. The town’s cotton and coal industries declined in the 20th centuryand the last working cotton mill closed in 1980. 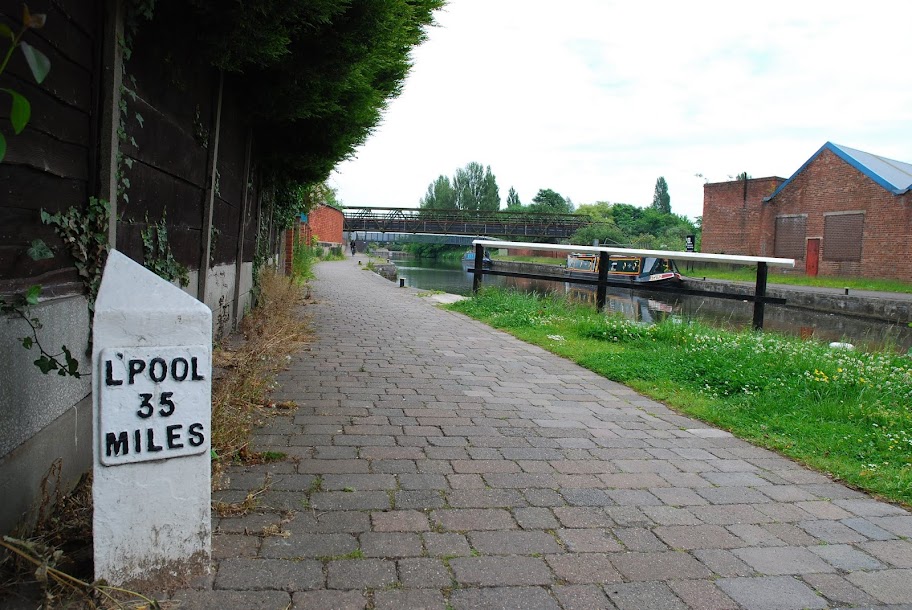 I did eventually get lunch after a friendly local gave me an excellent recommendation – the Stables Brasserie, located in an 18th Century stable building on Millgate, just yards from the busy centre of the town and the new Grand Arcade Shopping Centre. I had a superb salad Nicoise and a pint of Boddy’s. 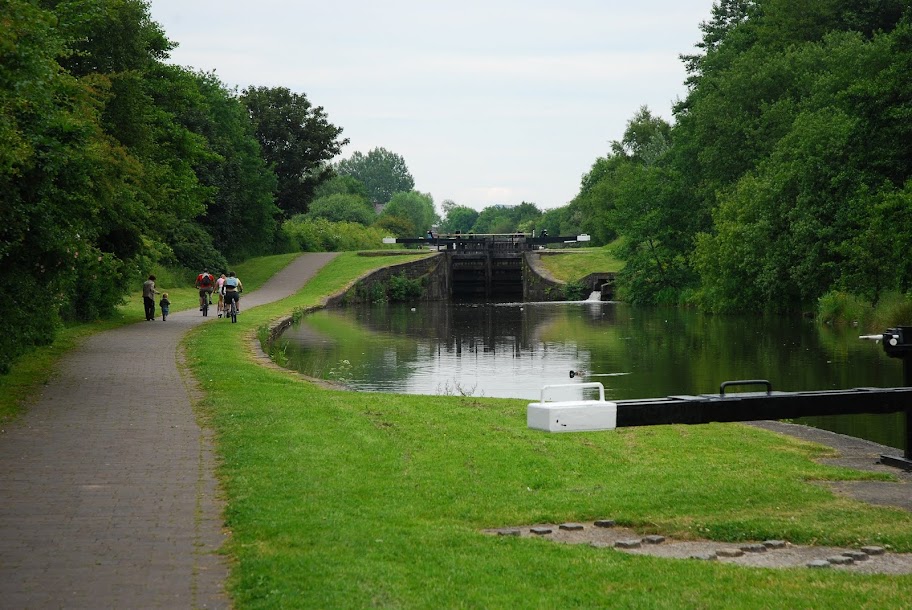 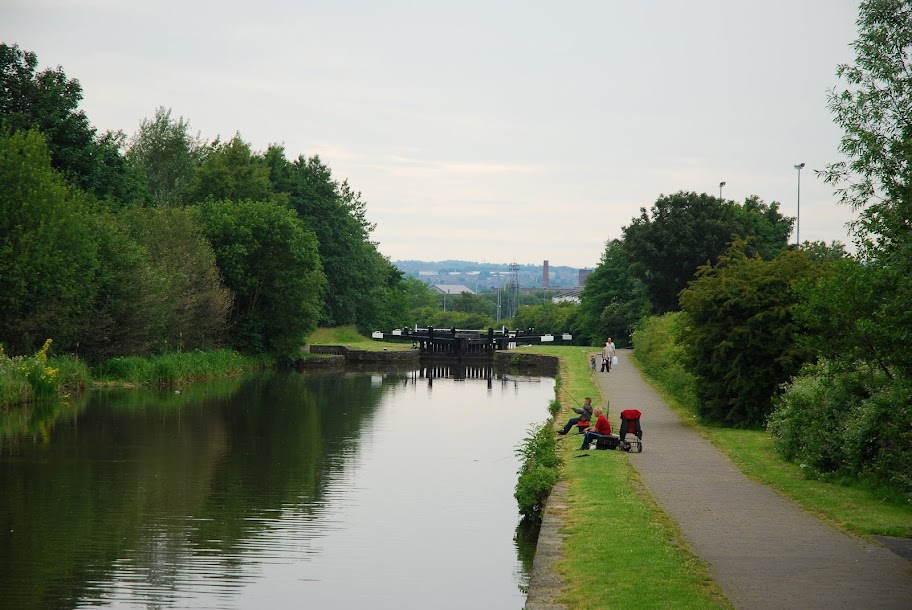 After the junction with the Leigh branch, the canal reaches the Wigan flight of 21 locks. This was once a heavily industrialised area, with collieries and ironworks. Today the canal has bequeathed a very pleasant linear park to the town, the adjoining industrial waste ground having been landscaped and the towpath paved to provide an excellent cycle lane that is evidently well-used. 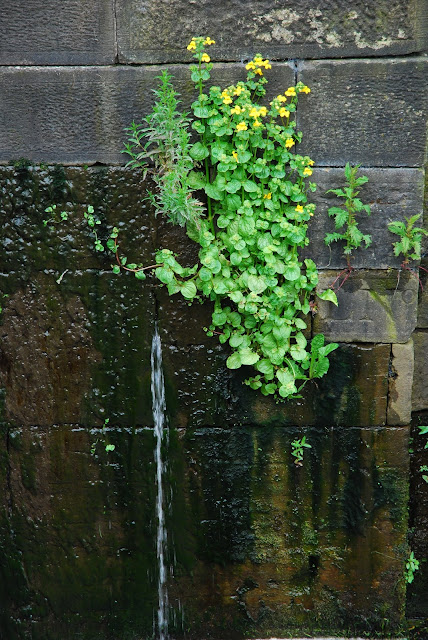 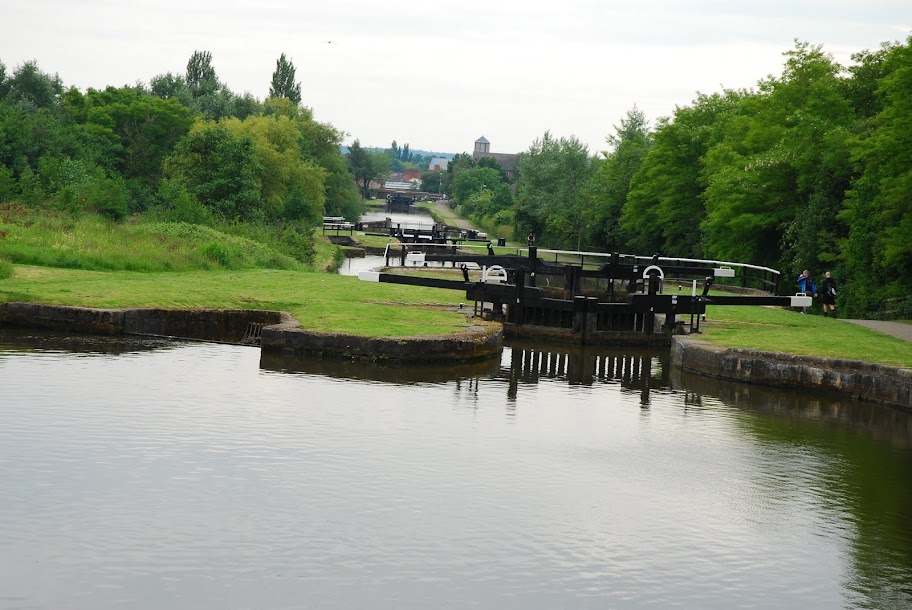 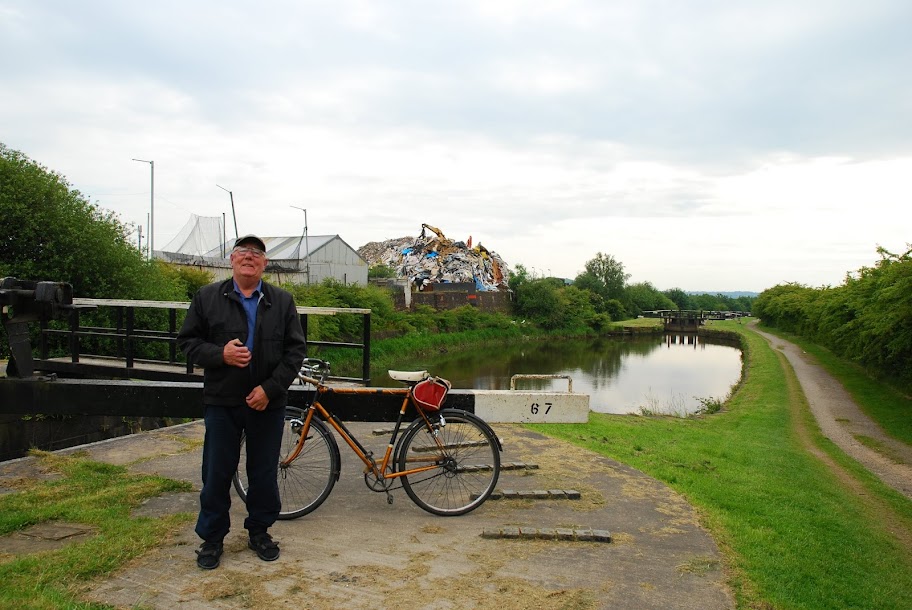 Just before the top lock I was hailed by Alan who asked whether I’d seen any boats coming up the rise (I hadn’t).  It turned out that he had worked on the canal before he retired and we chatted for while about how much the area around the locks had changed. Amongst the industrial sites along here were Bridge Colliery and Ince Hall Coal and Cannel Company (cannel being a dull coal that burns with a smoky flame). And beside the top nine locks stretched the Wigan Coal & Iron Works, then one of the largest ironworks in the country. It was a massive operation, employing 10,000 people at the turn of the 20th century.  It mined 2 million tons of coal to produce 125,000 tons of iron annually.  The skyline here was dominated by 10 blast furnaces, 675 coking ovens and a 339 foot chimney. It must have been an impressive sight on the Wigan skyline at night. All gone now, leaving not a trace. 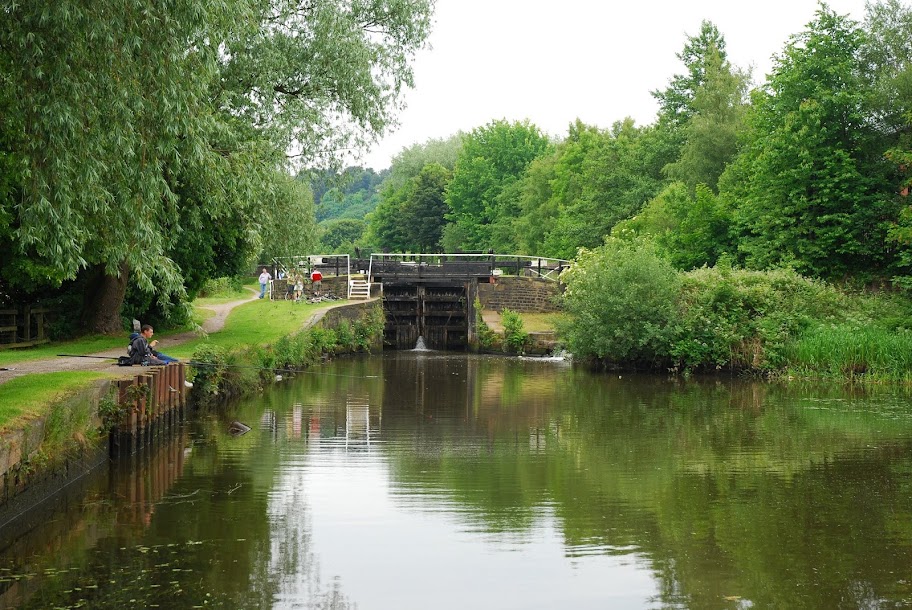 From the top lock the canal makes a sharp turn left; looking down from here over the town you become aware of the great height climbed through the 21 locks.

Reaching Bridge 59A at New Springs, I decided to call it a day and caught a bus back into town. I travelled out on 9:55 train from Central to Ormskirk, then caught Cumfy Bus 203 to Parbold. Returned by bus to Ormskirk, then Merseyrail home. The bus to Ormskirk stopped at the Arriva depot in Skelmersdale to change drivers. It was there I caught sight of this strange admonition: what bureaucratic mind thought up this? 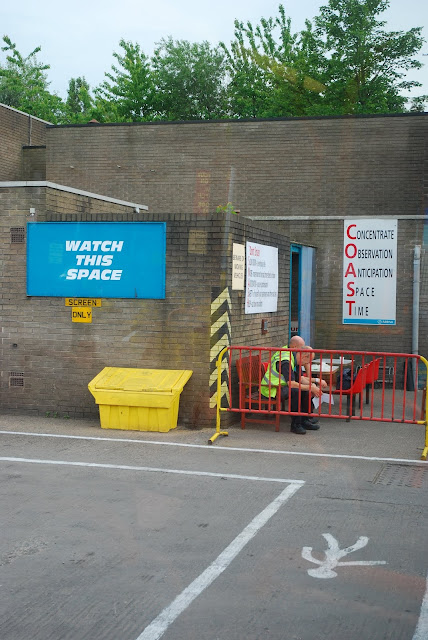 Back to Liverpool where this ad for British canals is currently on display at the bottom of Leece Street: the end of an everyday getaway. 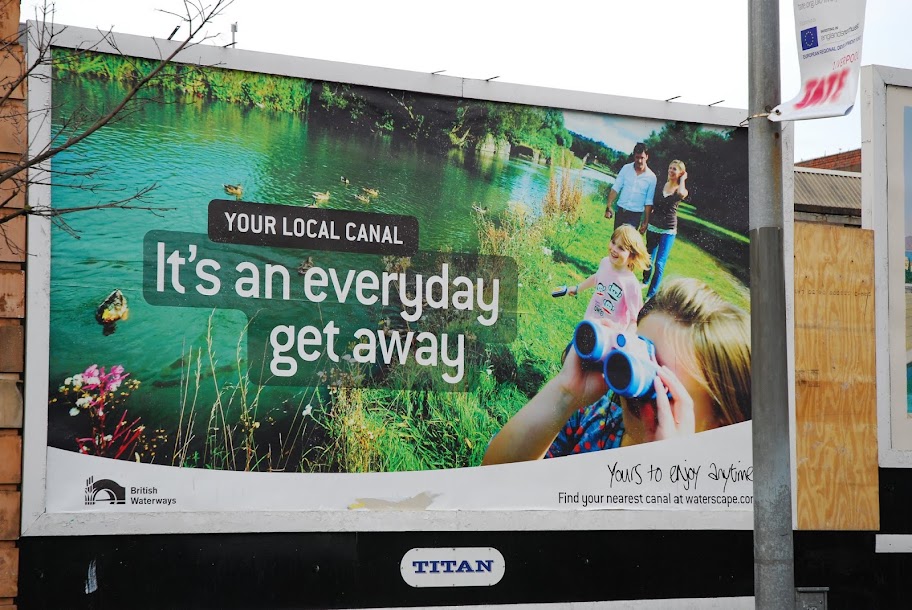 Next: Wigan to Blackburn