I happened to be in the vicinity, so I decided to revisit Antony Gormley’s Another Place on Crosby beach –  and walk up to the mouth of the river Alt (having crossed it on the canal walk a few weeks back).

Another Place consists of 100 cast-iron, life-size figures spread out along three kilometres of the foreshore, stretching almost one kilometre out to sea. The figures – each one weighing 650 kilos – are made from casts of the artist’s own body standing on the beach, all of them looking out to sea, staring at the horizon in silent expectation.

According to Antony Gormley, Another Place harnesses the ebb and flow of the tide to explore man’s relationship with nature. He explains: “The seaside is a good place to do this. Here time is tested by tide, architecture by the elements and the prevalence of sky seems to question the earth’s substance. In this work human life is tested against planetary time. This sculpture exposes to light and time the nakedness of a particular and peculiar body. It is no hero, no ideal, just the industrially reproduced body of a middle-aged man trying to remain standing and trying to breathe, facing a horizon busy with ships moving materials and manufactured things around the planet”.

The sculptures continue to draw people to the beach, quite often photographing each other beside one of the figures; here, I’m photographing this guy photographing another couple adopting the same pose as the figures (again, something people do quite a lot).

Walking to the northern end of the beach you arrive at the surprisingly broad estuary of the river Alt.  There are wonderful, expansive views here: across the Mersey bay to the Wirral, the mountains of  Snowdonia and the isle of Anglesey. There are the persistent cries of oystercatchers.The Alt Estuary is an important site for shore birds such as Curlew, Redshank, Shelduck, Knot, Bar-tailed Godwit and Sanderling.

The River Alt rises to the east of Liverpool at Huyton-with-Roby and flows in a north westerly direction towards Formby where it turns south towards Hightown and the sea. The upper part of the catchment is urban, the lower part rural.  Within the total catchment area of 89 square miles there are about 20 square miles of rich agricultural fenland which could be ruined by high tides if special attention were not given to its damage. Just when this lowland area was won from the sea is not known but it is believed that the works were carried out by local monks in the 13th Century and by the Dutch in the 17th Century. The earliest written records are dated 1779, when an Act was passed for “Draining, improving and preserving the lowlands, in the Parishes of Altcar, Sefton, Halsall and Walton-upon-the Hill, in the County Palatine of Lancaster”.

Here, the back of the beach is strewn with building rubble that stretches for hundreds of yards, from the coastguard station to the river Alt. Huge piles of building material and rubble has been dumped between the beach and the sand-dunes to prevent the sea from wearing the dunes away.The rubble ranges from house bricks (with dates from 1912 to 1956 on them) to huge granite and marble lintels and arches, reinforced concrete and all sorts of other stuff. Some seems very fresh, while other pieces have been worn smooth by the waves.

Where is it all from? Apparently it’s rubble from Blitz through to 1970s slum clearance. The part nearest the Alt being 1940s Blitz rubble. From the beginning of the last century, the mouth of the River Alt began to migrate along the foreshore towards Liverpool. This had the effect of lowering the beach, allowing waves to reach and erode the sand dunes, gardens and large houses along Burbo Bank Road. In fact Burbo Bank Road North itself disappeared at one point. 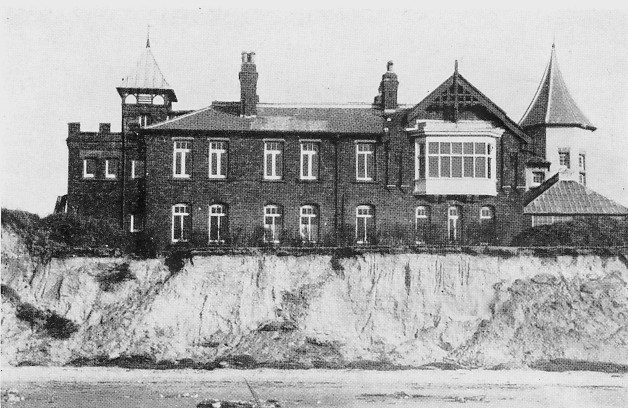 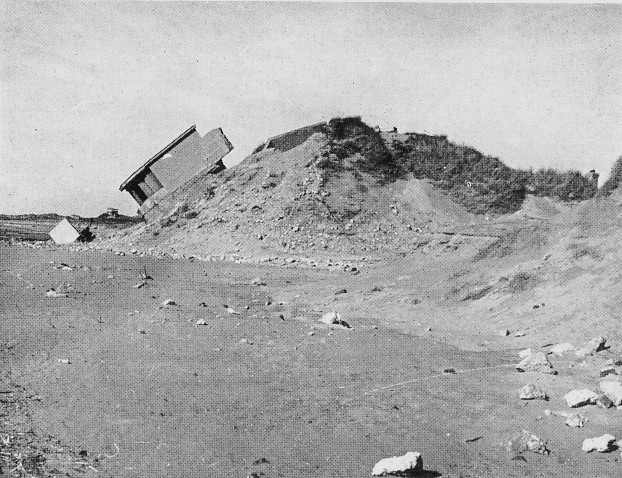 In 1936, the Alt was diverted out to sea by a breakwater between Hightown and Hall Road. Due to the lowered beach, erosion continued and Blitz rubble and Bootle Tinworks waste was tipped to provide a barrier. Later demolition rubble followed, culminating in the construction of the promenade over part of it. The shore level has now risen enough for erosion to become accretion. Planting of Marram grass on the dunes north of Hall Road has stabilised that section.

2 thoughts on “Another Place revisited”