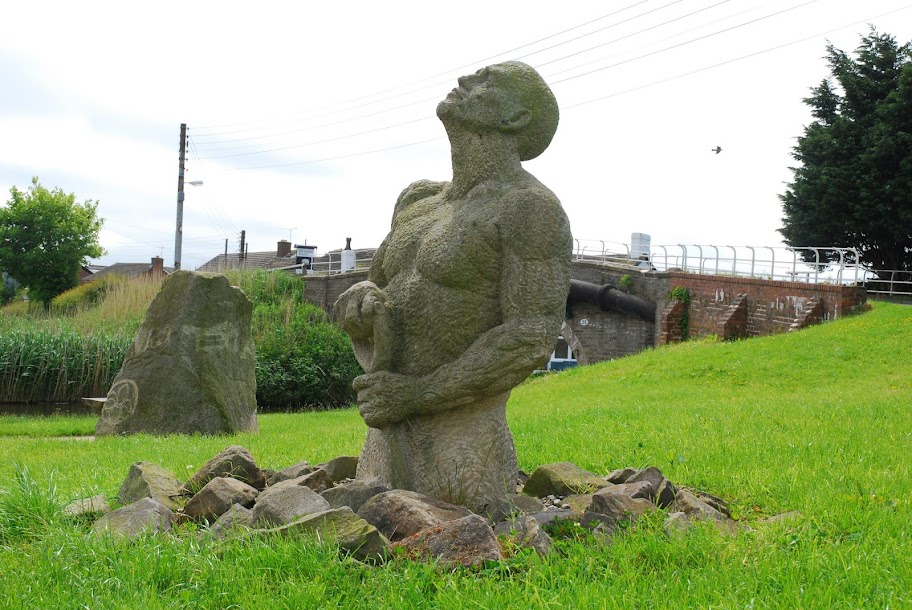 I began this leg of the journey at Halsall, where the first sod was ceremonially dug (in November 5, 1770, by the Hon Charles Mordaunt of Halsall Hall) for the commencement of the Leeds and Liverpool Canal. A sculpture (‘Halsall Navvy’ by Thompson Dagnall, erected 2006) next to bridge 25 by the Saracen’s Head pub now commemorates this.

I caught the 300 bus to Halsall War Memorial, which stands by the church, a short walk from the canal. The day was warm and sunny, though with a fair amount of clod – but at last it seems the cool, changeable weather we’ve had this May is giving ground to a warm spell. As I set off on the towpath birds were warbling in the reeds on the opposite bank. 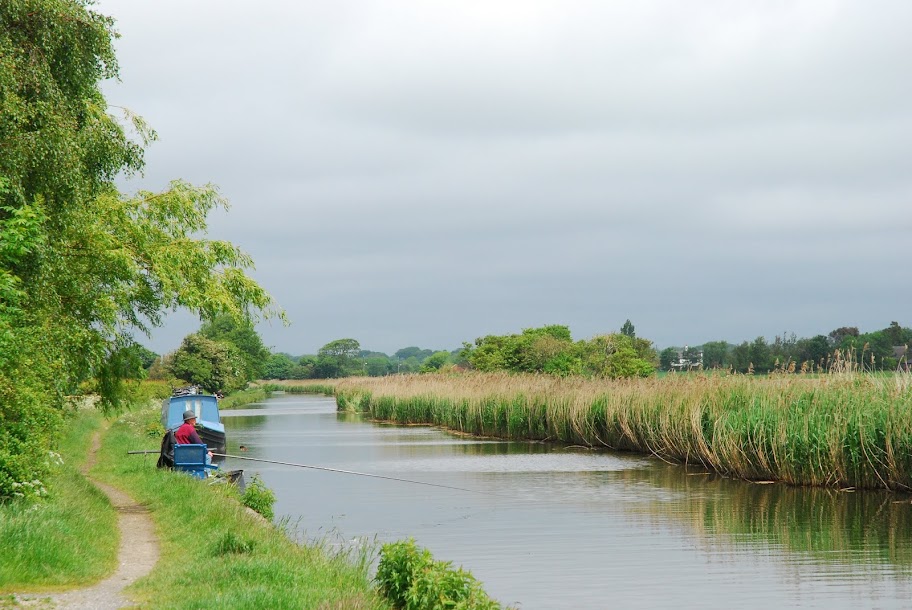 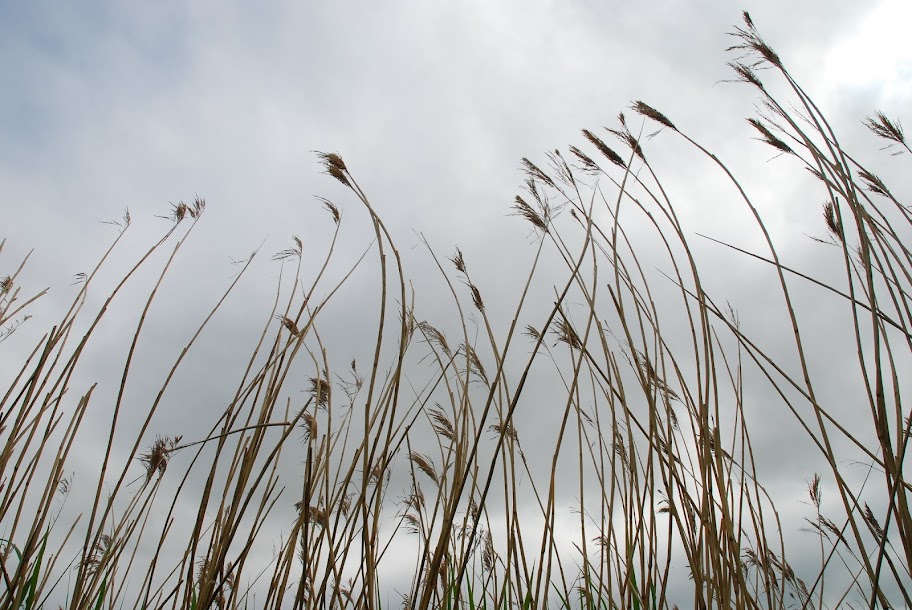 On Halsall and the launch of the canal, I found this on the website of the Ormskirk & West Lancashire Numismatic Society:

One of the major constraints on economic development in the eighteenth century was the appalling state of transportation. The roads alternated between mud baths and dust bowls, depending on the season, while navigable rivers were few and far between. Relatively small scale works, such as the Douglas Navigation between Wigan and the Ribble Estuary, had improved matters to some extent, but in 1767 two groups of far-sighted businessmen set up committees, one in Liverpool and one in Leeds, to investigate the construction of a canal to link the growing industrial areas with the coal fields and the major ports of the North East and North West of England. The outcome of their planning was the Leeds and Liverpool Canal Act of 1770, which authorised the construction of the first major canal in Great Britain. The route of this canal passed immediately adjacent to Halsall, and the very first sod turned, in the construction of this industrial miracle, was turned on 5th November 1770 by Colonel Mordaunt of Halsall Hall. 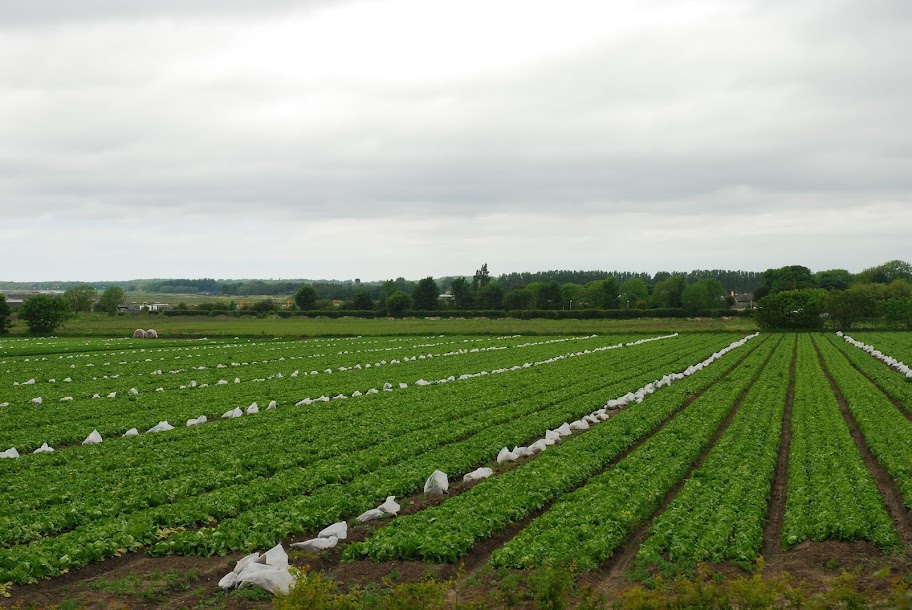 The canal now runs through continuous open countryside, which soon establishes itself as extremely flat and intensively cultivated lowlands. In the large fields alongside there are ranks of cabbage, potatoes and other crops as far as the eye can see. 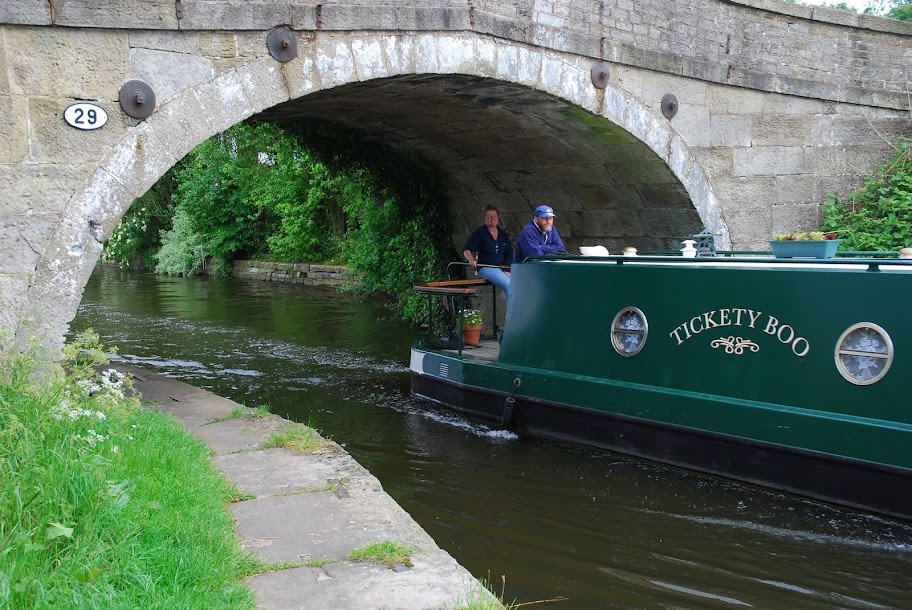 This was once an area of low lying marshland, much of it below sea level and, consequently, thinly populated. The original course of the River Douglas ran close by, joining the sea near Southport. At some point its course was blocked possibly by giant sand dunes thrown up by a great storm and it found a new, northern mouth in the Ribble estuary, leaving behind the area known today as Martin Mere. This once extended to 15 square miles but in 1787 Thomas Eccleston of Scarisbrick Hall, with the help of John Gilbert, set about draining it for agricultural use (it was Gilbert who, as agent to the Duke of Bridgewater, enlisted James Brindley’s help in constructing Britain’s first major canal). Once drained the mere required vast quantities of manure to raise its fertility for crop production. ‘Night soil’ was shipped in along the canal from the large corturbations of Liverpool and Wigan and off-loaded at a series of small wharfs, some still visible today. Part of the mere remains undrained, a haven for migrating geese. 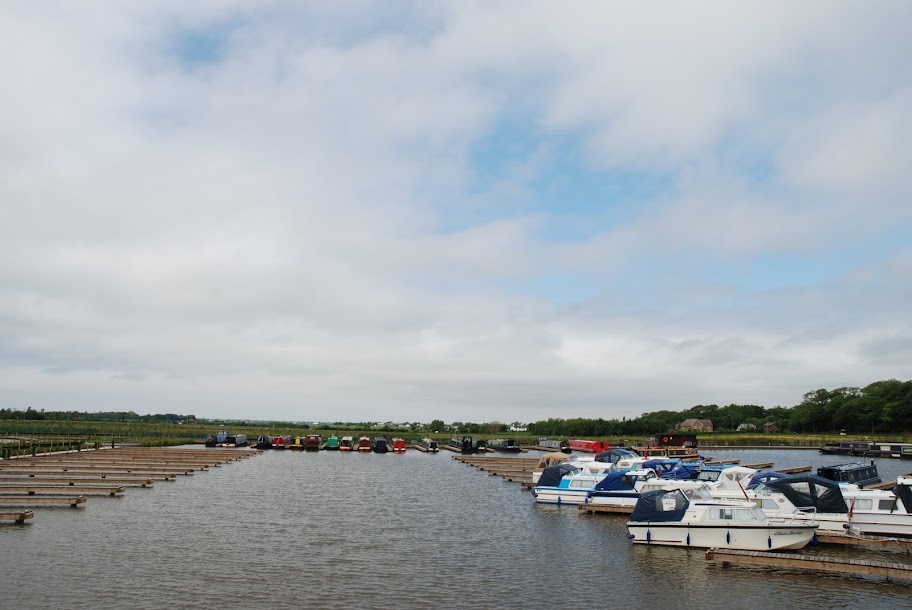 At Scarisbrick there is an extensive marina providing plenty of mooring places and narrowboats line the canal banks for a mile or so. Scarisbrick (apparently pronounced as ‘Scays-brick’) was, in early times, an area much avoided by travellers. With its vast tracts of poorly drained peat marshes and the huge lake of Martin Mere, it was difficult terrain to cross. Much of the flat land between Southport and Liverpool is, as noted, polder reclaimed from marshes and the lake. The place name itself comes from Old Norse, and literally means ‘the Norseman Skar’s hill-slope’. Scarisbrick appears to have been a village of some size during the thirteenth and fourteenth centuries. 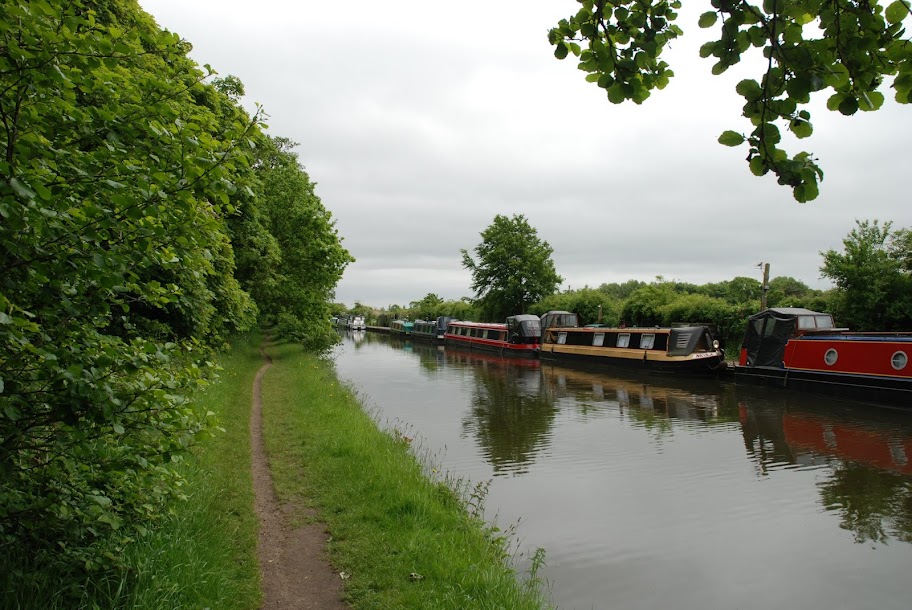 Scarisbrick Hall was the ancestral home of the Scarisbrick family and dates back to the time of King Stephen (1135–1154). The present building, considered to be one of the finest examples of Victorian Gothic architecture in England, was designed by Pugin and completed in 1867. Its most notable feature is the 100-foot tower, which resembles the clock tower of the Houses of Parliament. The building is now occupied by a private day school and public access only allowed once a year. There is a pleasant, wooded section of the canal towpath running alongside the grounds. Walking on I must have disturbed a lapwing with a nest and chicks in a neighbouring field (they often nest on farmland); she became extremely agitated, circling and calling ‘pee-wit’ as I walked on for several hundred yards. A little further on a pair of orange tip butterflies were active. 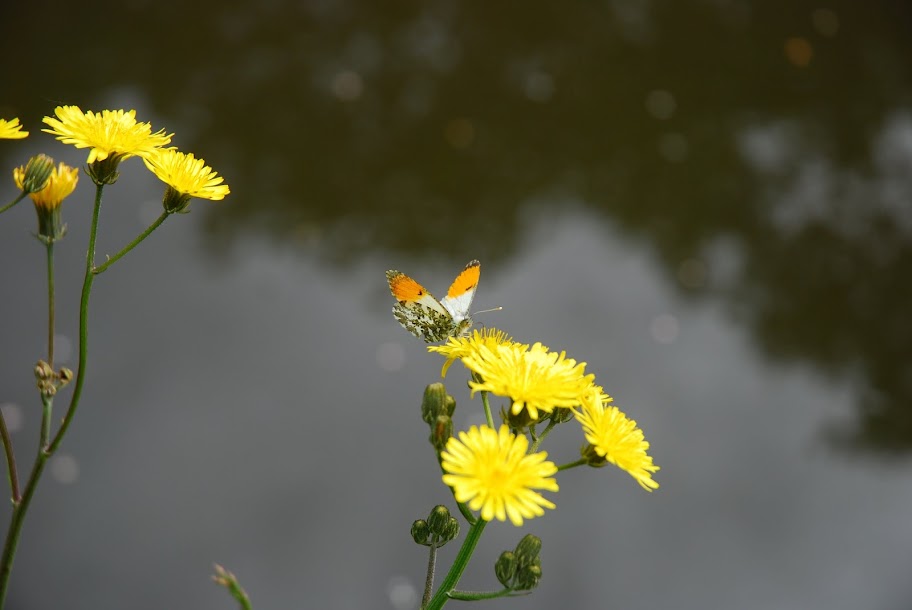 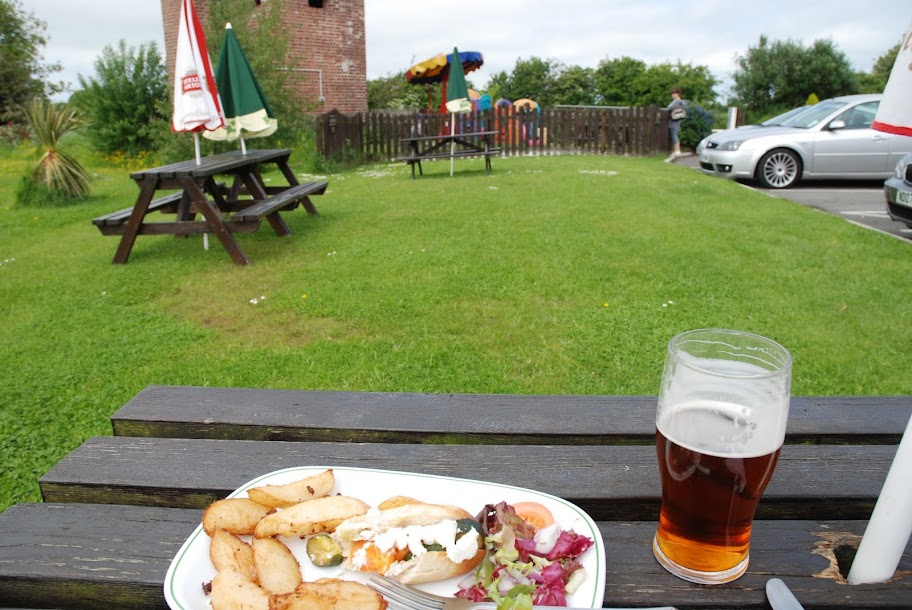 At Heatons Bridge I stopped for lunch (splendid roast veg and goat’s cheese baguette with mouth-watering home made chunky chips) and an excellent pint at the pub.  Just by the bridge there remains one of the many defensive pillboxes erected as a precaution against invasion during the Second World War. 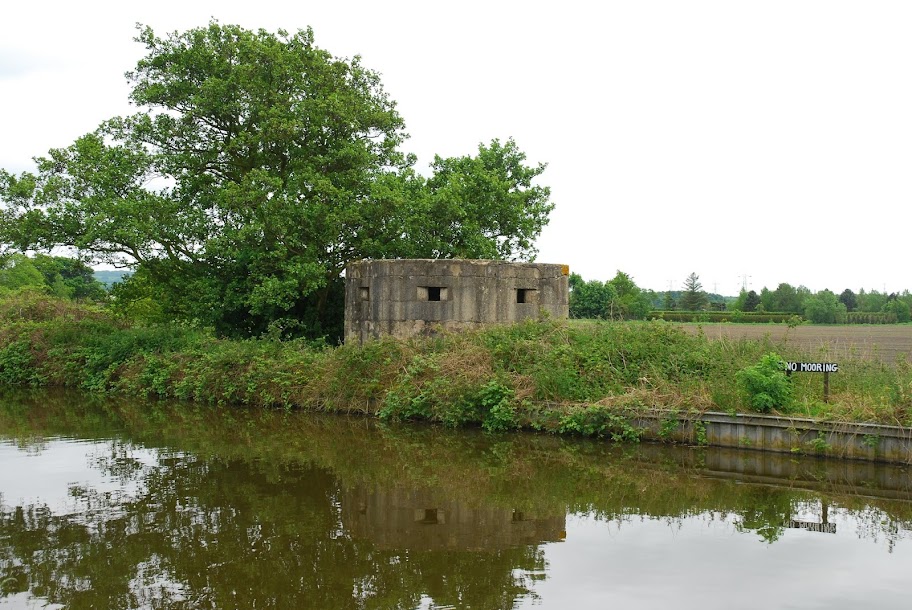 The next place of significance was Burscough Bridge. The draining of Martin Mere and the building of the canal had a dramatic effect on rural Burscough. The highly productive farmland had always been a major source of work but now even more land was available for cultivation and the growth of Burscough accelerated. 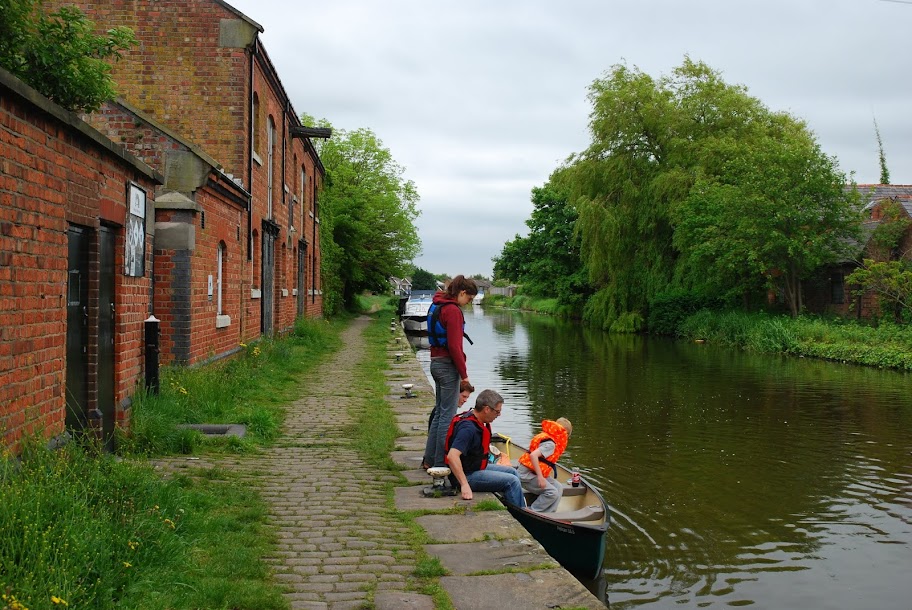 The completion of the canal saw the development of Burscough Bridge into the most important canal town in Lancashire. Burscough became a bustling transport centre, it was a staging post for the packet boats that carried passengers between Liverpool and Wigan, some of whom would transfer to the stage coaches travelling along the turnpike road to Preston and the North. 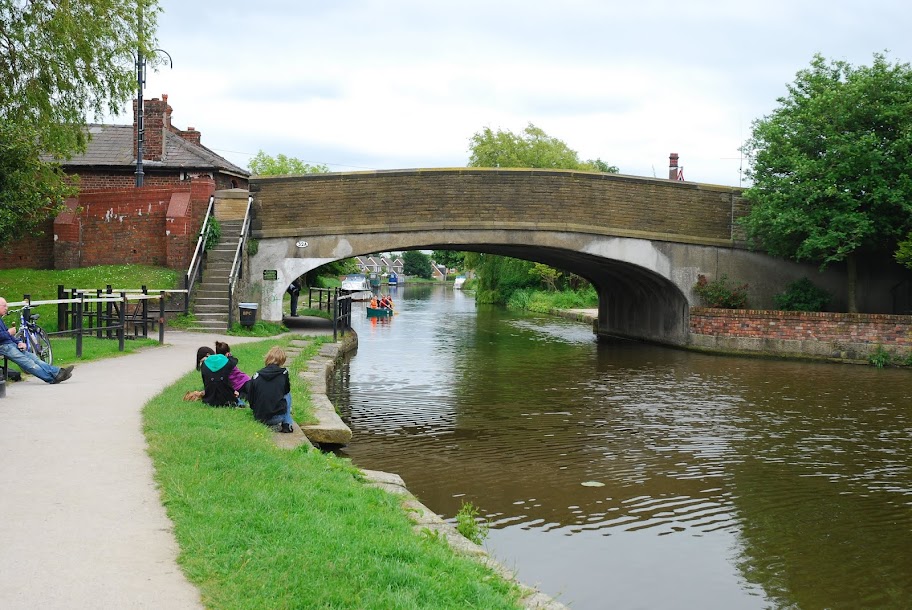 The traffic on the canal continued to grow in the 19th century. Boats carried coal from the Lancashire coalfields through Burscough on the way to the Liverpool docks and brought commodities for the fledgling industries that sprang up around the canal, such as imported grain for Ainscough’s Flour Mill. Manure was brought from the dray horses and middens of Liverpool and dropped off at the muck quays along the canal, then used to fertilise the reclaimed farmlands and further increase the area’s agricultural output. 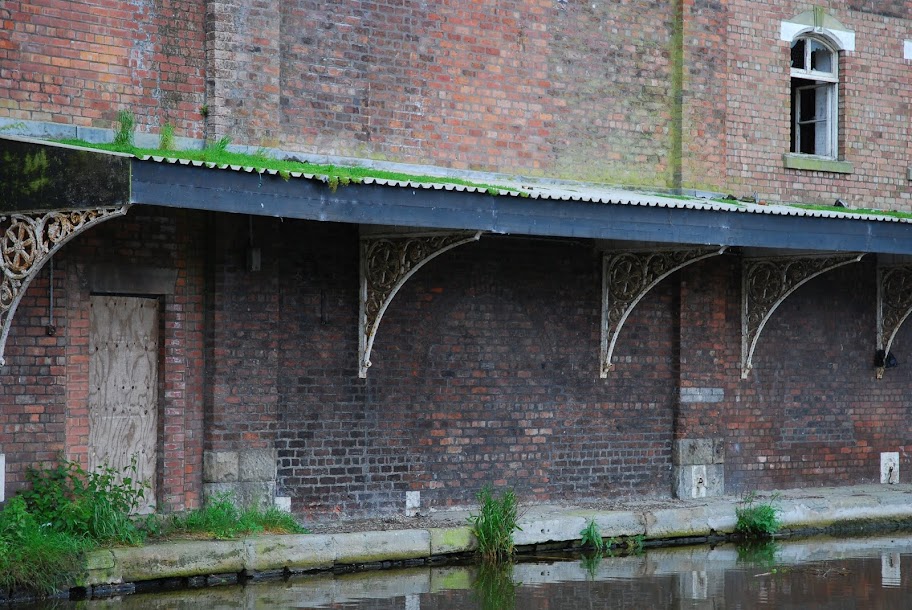 A local explained to me that the now-derelict Ainscough’s Flour Mill is a listed building. It was originally owned by H & R Ainscough, who also owned a mill in Parbold and then by Allied Mills until its closure in 1998. The site was bought by Persimmon Homes who plan to convert the mill into apartments, though nothing has happened recently – perhaps because of the credit crunch. After nearly 10 years of disuse, the site is starting to decay, and has suffered some vandalism, but is largely intact. Atmospheric photos of the interior of the mill can be viewed on The View From The North website. 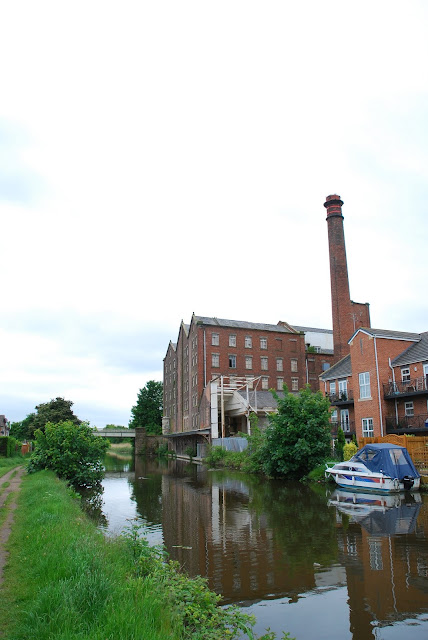 Just after Burscough Bridge the Rufford branch leaves the main canal through an arched bridge dated 1816. A canal settlement, now a conservation area, surrounds the lock and a dry dock: it’s a very attractive corner, with cobbles and old cottages and attractive views over Lathom locks down towards Rufford. 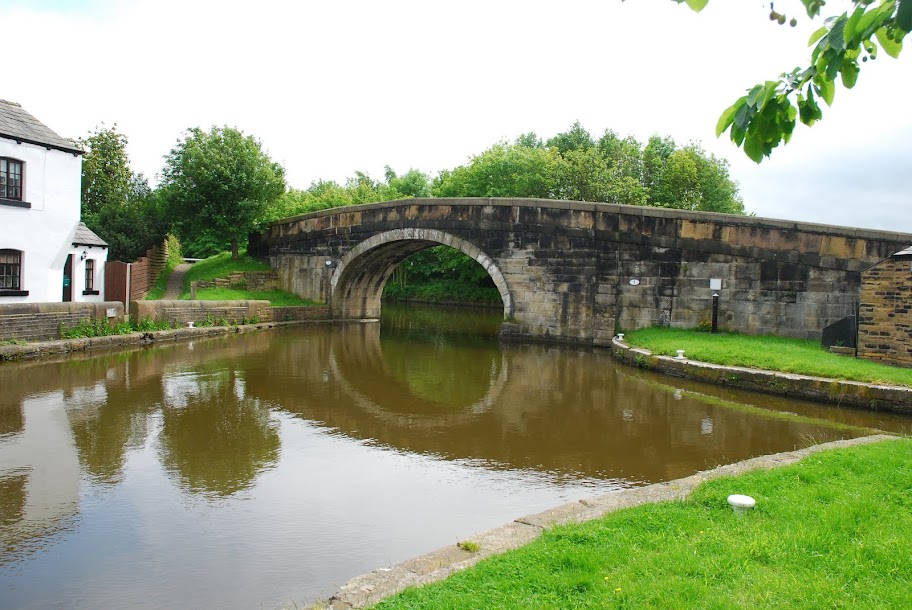 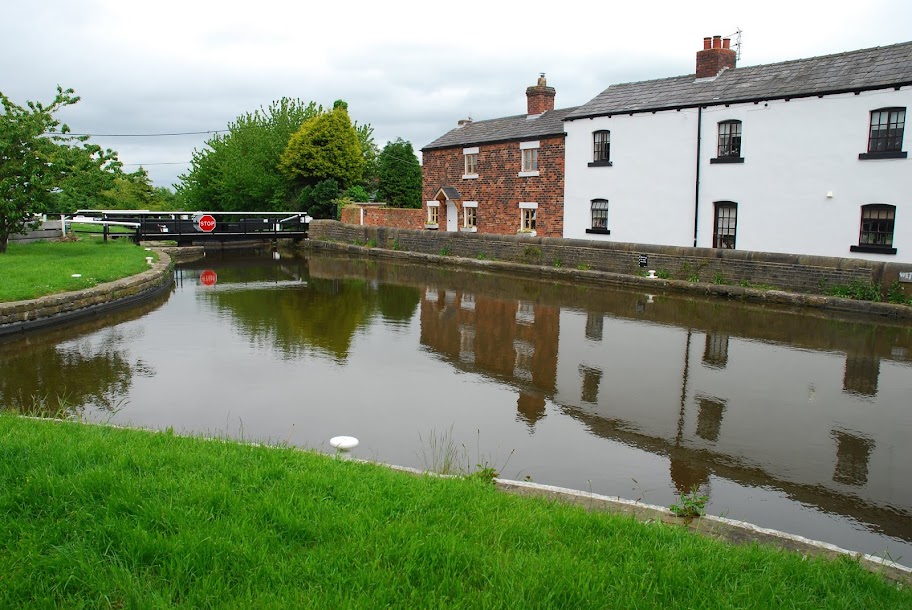 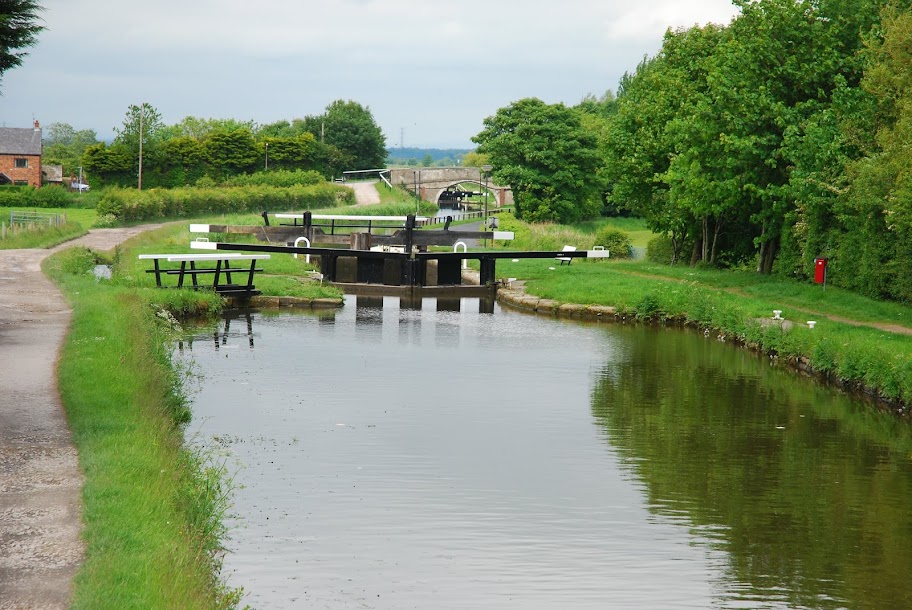 Navigation on the River Douglas pre-dated the Leeds-Liverpool Canal. When the canal was built it replaced the Douglas between Wigan and Burscough. A new cut between the main line and the river at Sollom was built. Later the lock at Sollom was removed and a river lock built at Tarleton. The Rufford Branch in places looks more like river than a man made channel, while the River Douglas has been canalised and is dead straight. Images of the Rufford branch can be viewed on the Towpathtreks site.

About three miles further on is Rufford Old Hall (National Trust), one of Lancashire’s finest 16th-century Tudor buildings. Most famous for its spectacular Great Hall, with carved ‘moveable’ wooden screen and dramatic hammer beam roof, it is also rumoured that a young William Shakespeare performed here for the owner Sir Thomas Hesketh. Another day I’ll visit the Hall and the explore the canal there.

But for now, it was on towards Parbold. A little further on I encountered a sunken boat, a fierce dog and a rather odd place for barbecues in the shape of a fish. 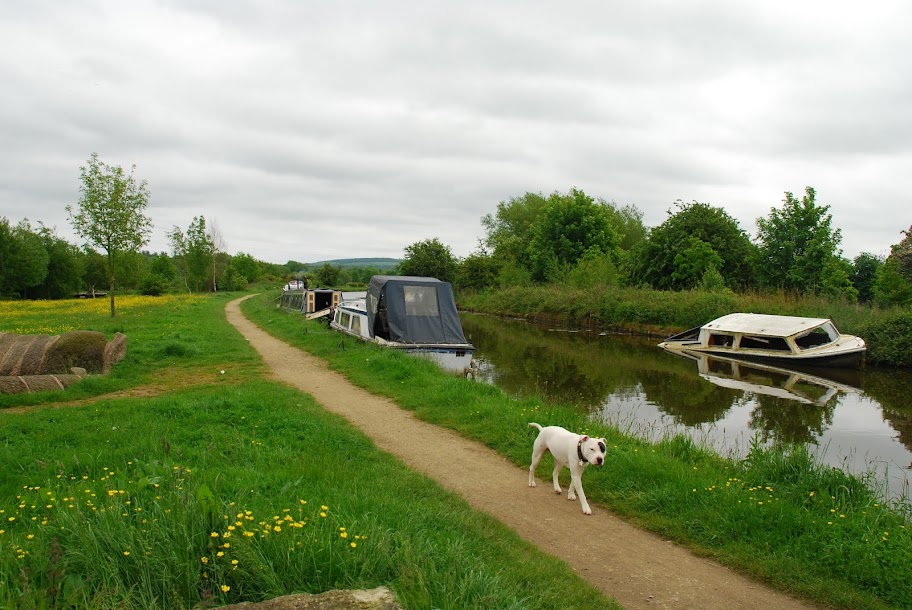 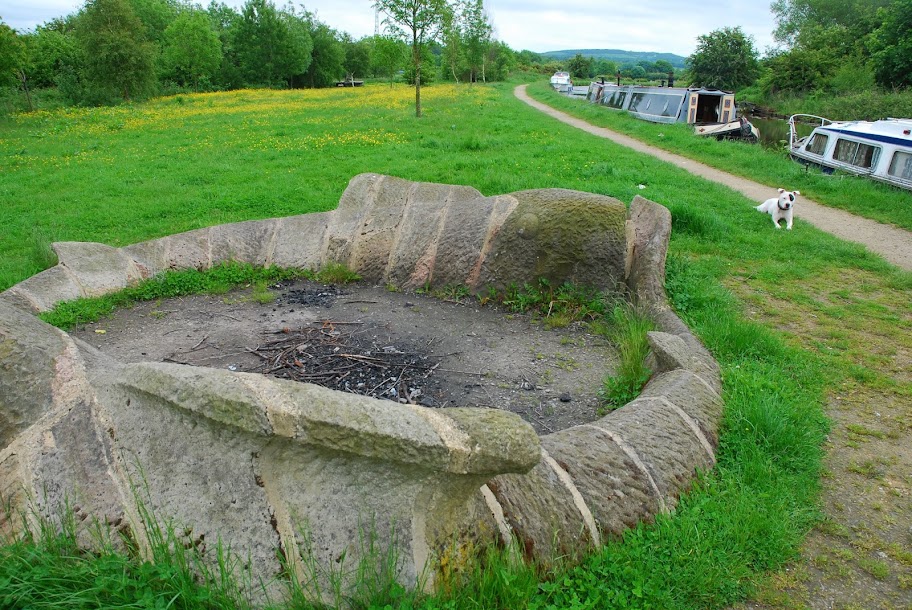 Finally Parbold hill began to come into view, a reminder that I was leaving the Lancashire flatlands and would soon be entering different country. 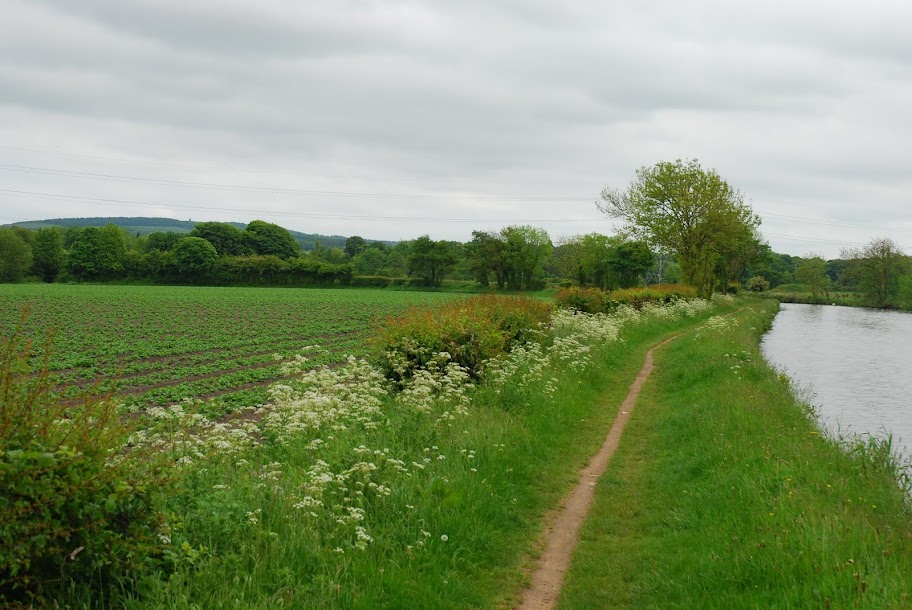 Along the banks of the canal here is a profusion of Cow Parsley, known also as Queen Anne’s Lace, which seems a more appropriate  description of this elegant plant. A Dylan melody goes through my mind:

Purple clover, Queen Anne’s lace
Crimson hair across your face
You can make me cry but you don’t know
Can’t remember what I was thinking of
You might be spoiling me with too much love
You’re gonna make me lonesome when you go

(You’re Gonna Make Me Lonesome When You Go)

The fresh, green fern-like leaves and frothy flat heads of cow parsley line lanes and roadsides in May and June. It’s apparently adapted well to changes in farming in the last few decades, benefiting from the heavy use of fertiliser in farm fields, and possibly also the  nitrogen in traffic fumes. It occurs widely on railway banks, woodland edges and on waste ground. I remember as a child we’d use the hollow stems as pea-shooters.

There’s a poem featuring cow parsley that also evokes the sense of noon-day heat and stillness as I walk this stretch:

The pasture gleams and glooms
‘Neath billowing skies that scatter and amass.
All round our nest, far as the eye can pass,
Are golden kingcup-fields with silver edge
Where the cow-parsley skirts the hawthorn-hedge.
‘Tis visible silence, still as the hour-glass.
(from Silent Noon by Christina Georgina Rossetti)

And there’s another inspired by this flower; Queen Anne’s Lace, by William Carlos Williams, is a meditation on purity in which a touch of desire changes everything:

Her body is not so white as
anemone petals nor so smooth – nor
so remote a thing. It is a field
of the wild carrot taking
the field by force; the grass
does not raise above it.
Here is no question of whiteness,
white as can be, with a purple mole
at the center of each flower.
Each flower is a hand’s span
of her whiteness. Wherever
his hand has lain there is
a tiny purple blossom under his touch
to which the fibres of her being
stem one by one, each to its end,
until the whole field is a
white desire, empty, a single stem,
a cluster, flower by flower,
a pious wish to whiteness gone over –
or nothing. 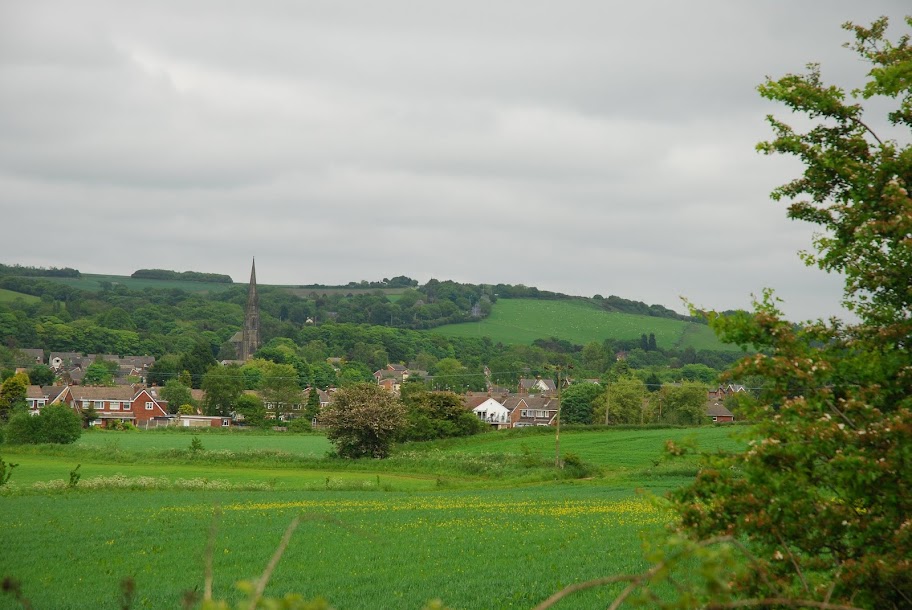 Parbold lies in the valley of the river Douglas, which was canalised before the construction of the Leeds-Liverpool canal, the route of which follows the river up to Wigan.

The village is dominated by Parbold Hill, on which lies the famous Parbold Bottle, now restored. This is a stone monument about 6.5 feet high, so called because it vaguely resembles a giant bottle. It was erected in 1832 to commemorate the First Reform Act. 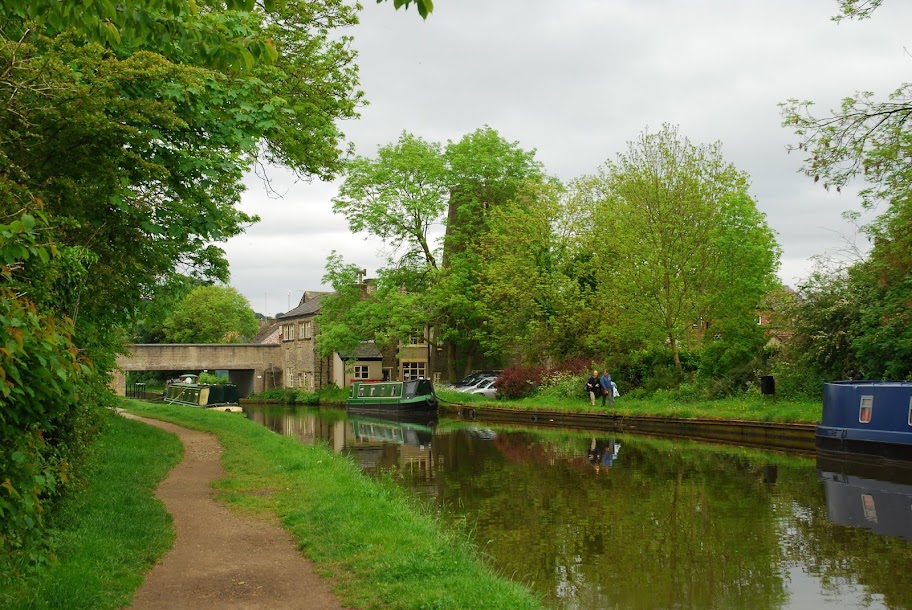 During the 18th and 19th centuries, coal was mined here and sandstone was also quarried. Both were exported via the Douglas and the canal; boat-building was also a minor economic activity. 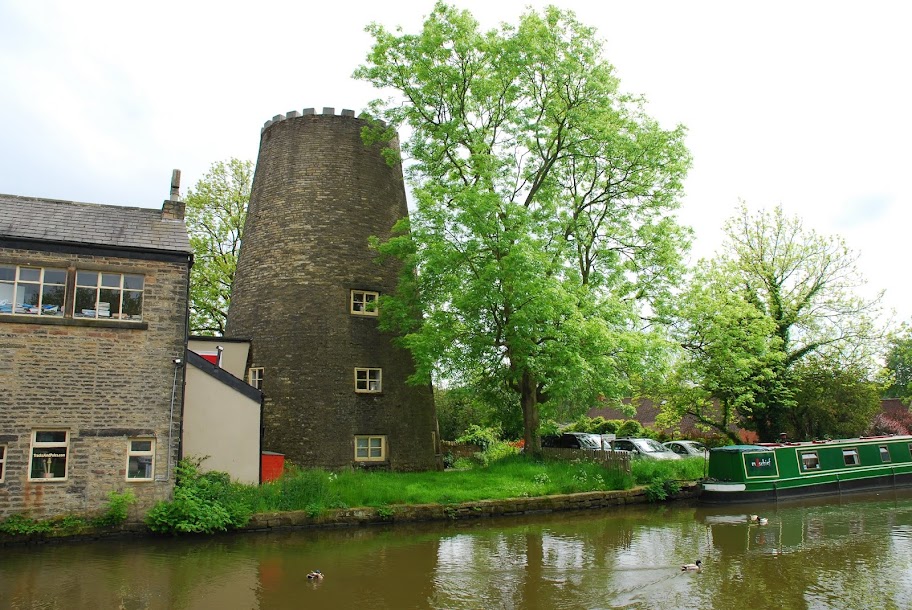 A familiar local scene is the old sail-less windmill just by the canal which replaced a water corn mill. The windmill in its turn was superseded in the mid-18th century by the present mill which was originally worked by a steam engine and produced cattle foods until its closure in 1985. 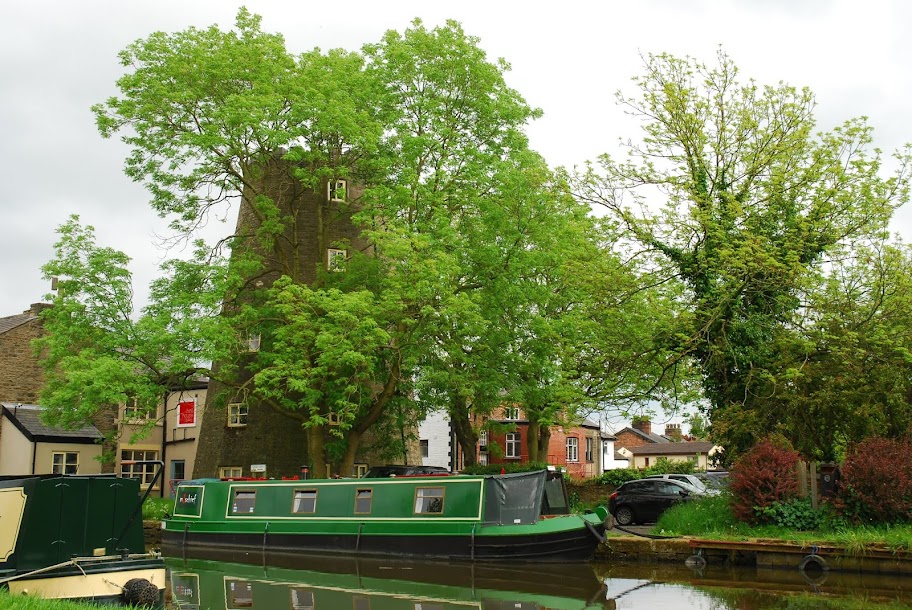 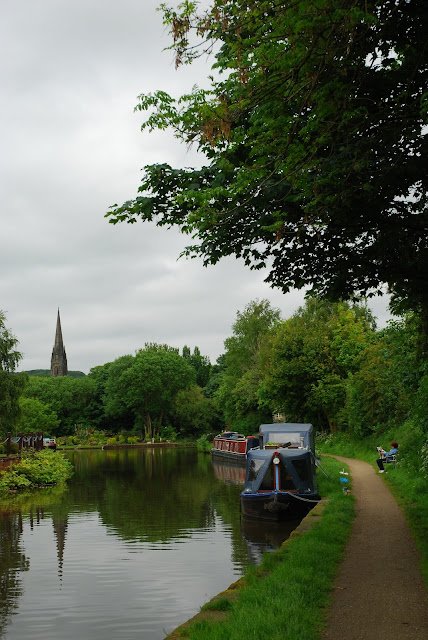 I caught Cumfybus 203 from Parbold shops to Ormskirk station, then Merseyrail back to Liverpool.

Next: Parbold to Wigan top lock

3 thoughts on “Walking the canal: Halsall to Parbold”