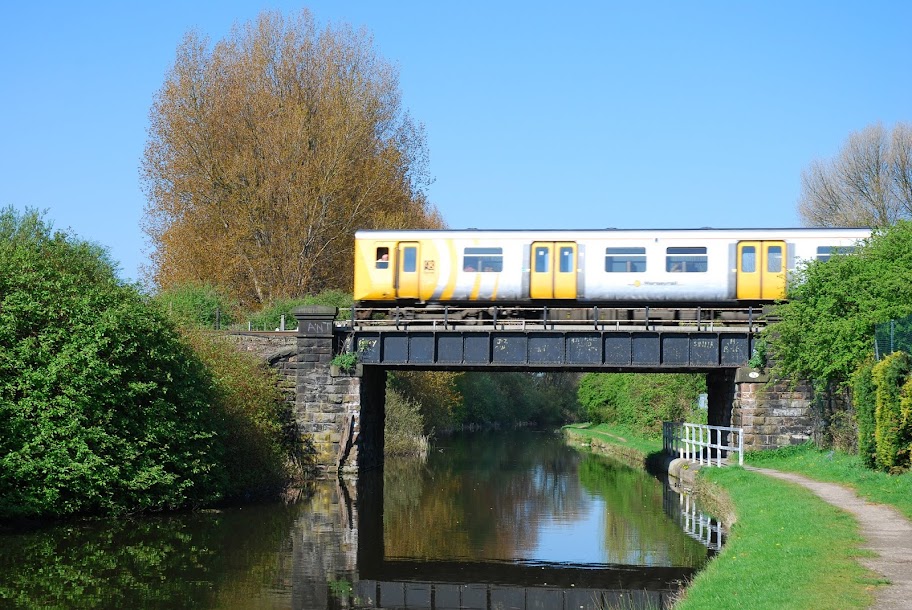 Yesterday, in brilliant sunshine, I completed another leg of the canal walk.  The sky was cloudless and blue and the the sun was warm. The towpath was busy with walkers and cyclists, and there was an occasional boat once I got past Maghull. 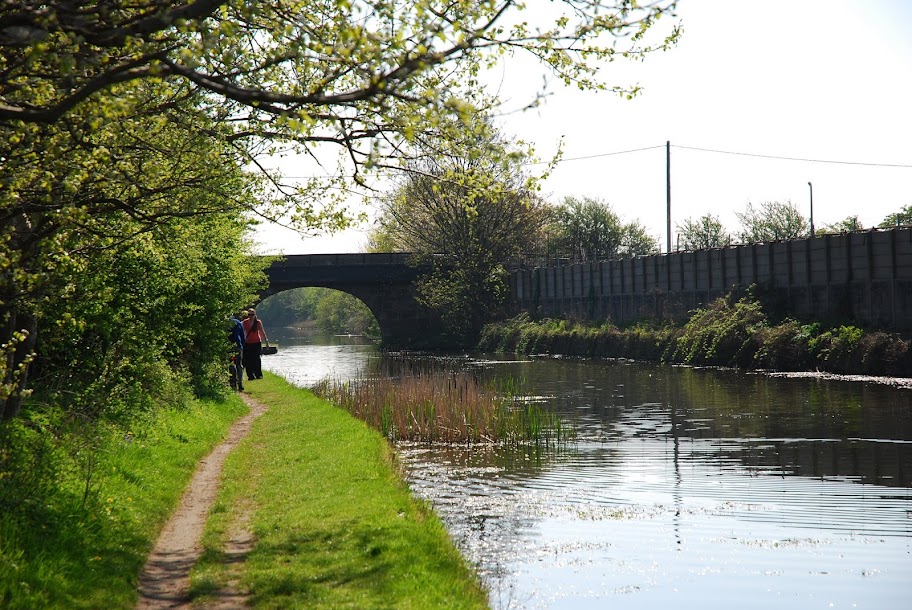 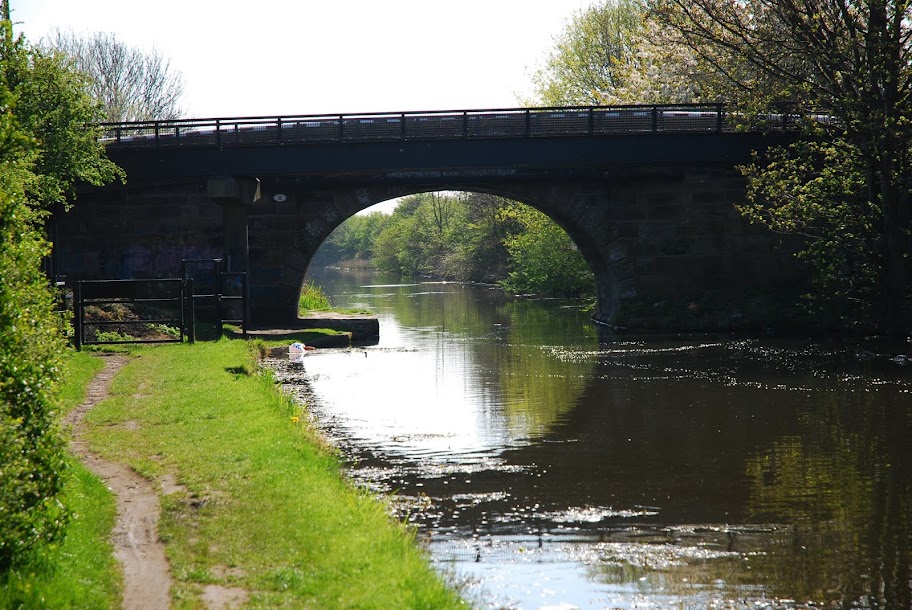 The walk began at Old Roan (I caught the train from Central) and then out past the Aintree race course, before turning north, passing under the M57, on past Melling and then to Maghull where I had a decent pint with lunch at the hare and Hounds, just near bridge 14. After that I pushed on past Lydiate and through the flat agricultural land to Downholland where I caught the 300 bus back into town.

Aintree, probably of Saxon origin, means “one tree” or “tree standing alone.” Local legend had it that a tree on Bull Bridge Lane, one of the oldest parts of Aintree village, was “the Ain tree”. The tree had to be cut down in 2004 because it had become diseased. 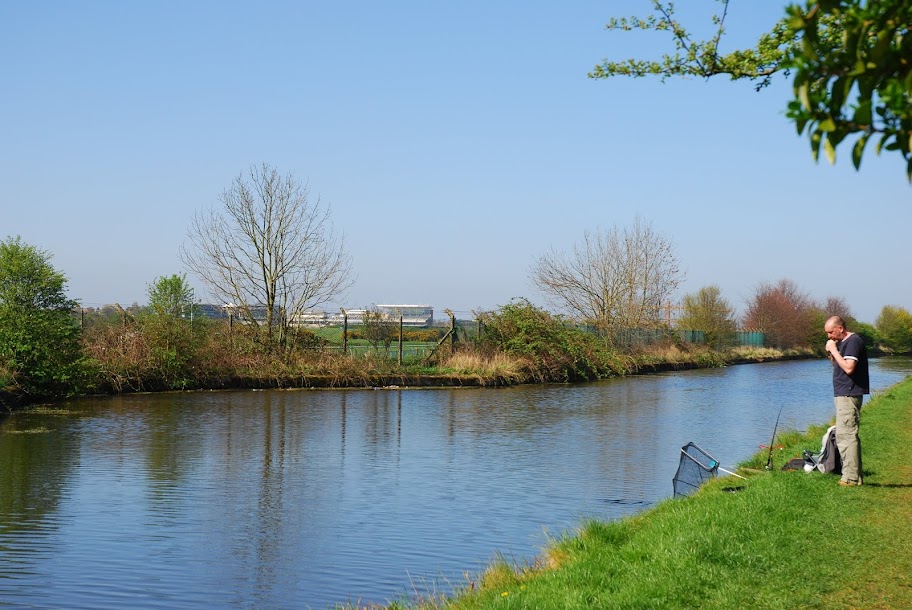 Obviously, Aintree is best known for the racecourse (above), which has staged the Grand National since the 19th century. During the 50s and ’60s there was also a motor racing circuit on the site. 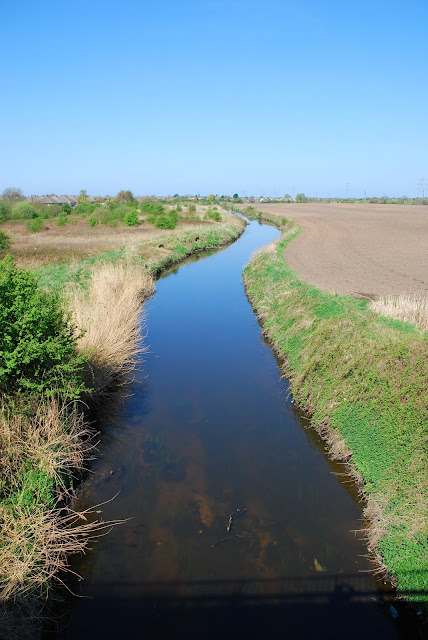 Just before the M57, the canal crosses the river Alt (above). The Alt runs from Huyton, through Croxteth Park, then north of Aintree to Formby before reaching the Irish Sea, at the northern end of Crosby beach. Today this seems an innocuous little river. But in the past, flooding and erosion of the land caused by the Alt meant hardships for local communities. In 1648 Joseph Thompson of Sefton wrote: “I made soo many motions about the river Alt, that for some reasons I grew wearie and sate down”. Much of the lower Alt catchment is very low-lying land and so the risk of flooding is high. A number of flood defences have therefore been built over the years to help protect the area, including a 20 mile network of embankments protecting farmland, a network of drainage ditches and a large pumping station at Altmouth (the mouth of the Alt River), which acts as a barrier to prevent tidal flooding of the area.

Nevertheless, I seem to remember that last summer the Alt did flood quite badly around Croxteth and Fazakerley. 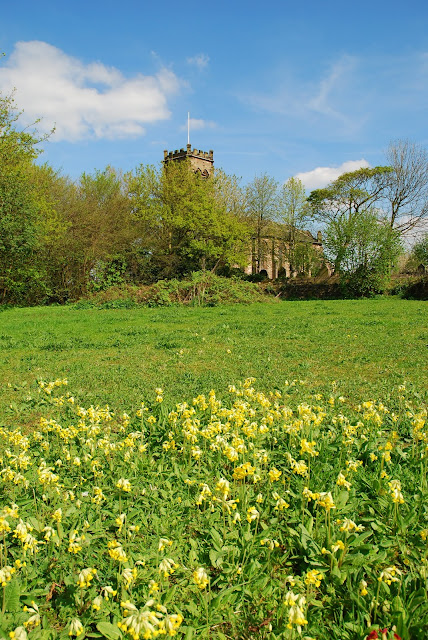 Melling village stands on a rocky outcrop above the surrounding flatlands. The church is alocal landmark and was built in the 15th century with rock from a quarry nearby.  The lane that runs past the church is Rock Lane and the church advertises itself as ‘the church built on the rock’. Opposite the church is a traditional meadow where I found cowslips. 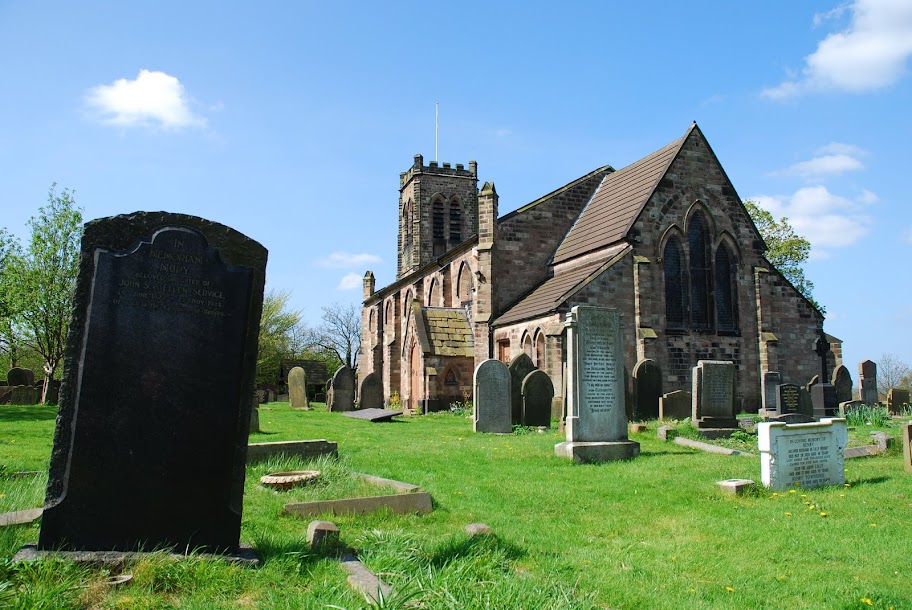 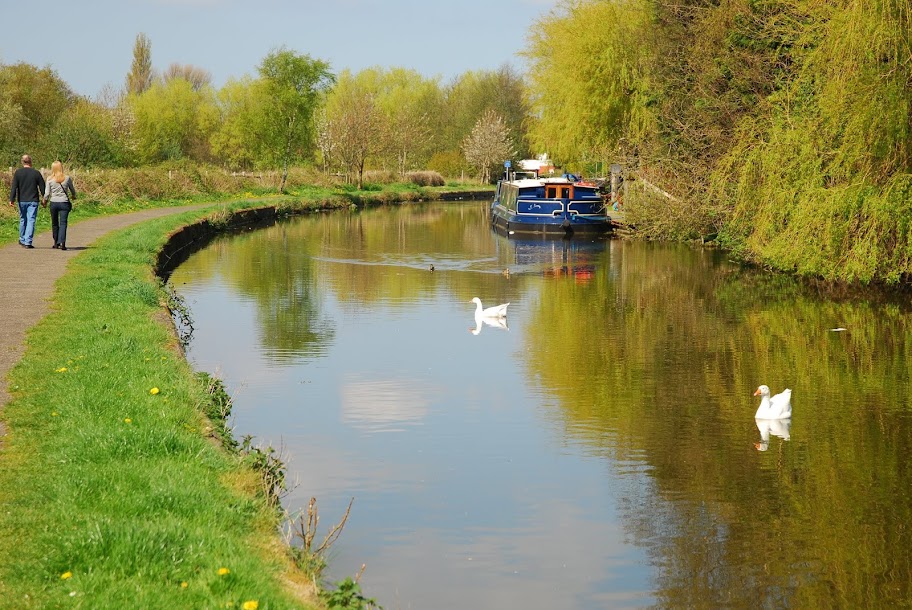 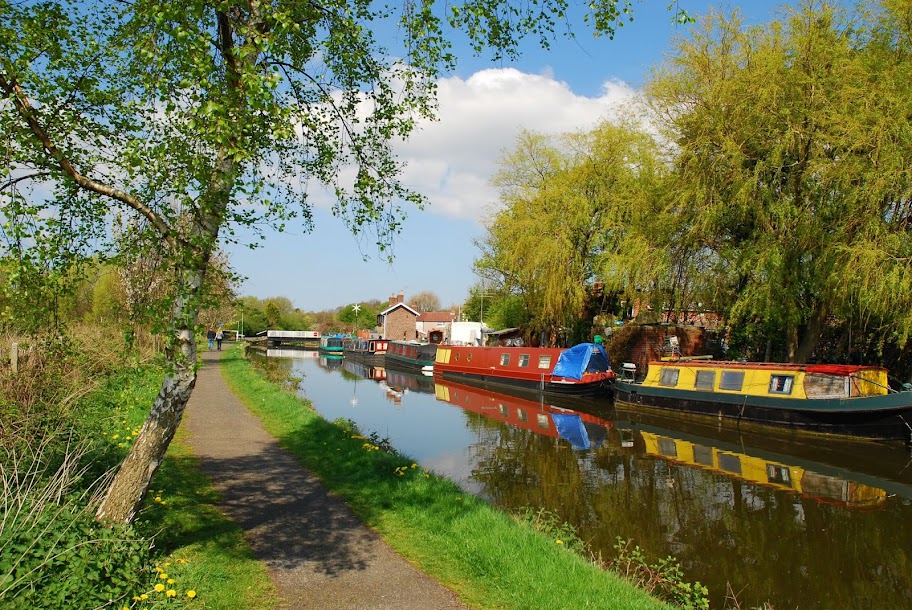 And so on to Maghull where houses line the far bank, all with long gardens running down to the waterside where owners have created attractive patio areas, no doubt for summer barbecues as the sun sets over the water. 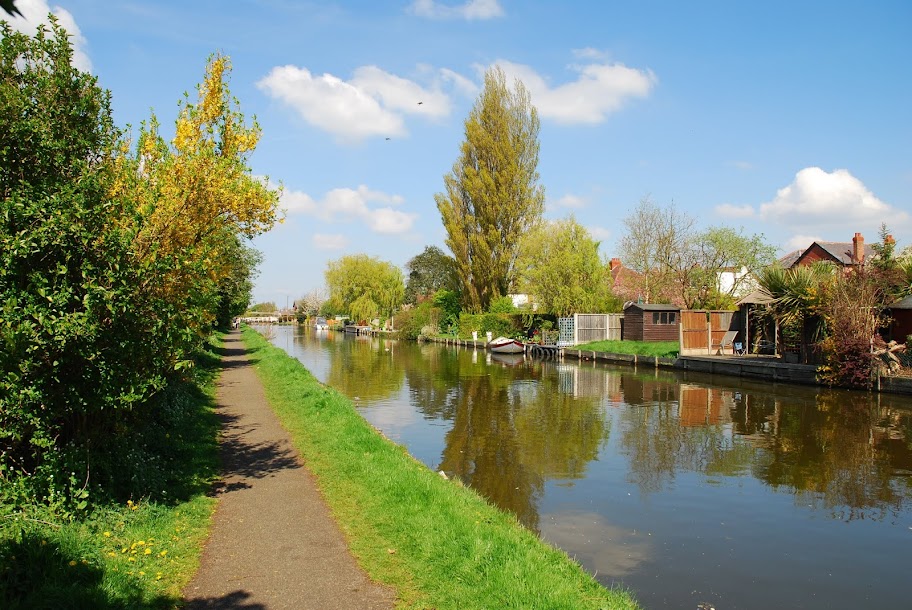 Like Melling, the original settlement of Maghull was probably on a ridge of high ground (to escape the Alt flood waters, no doubt). The first record of Maghull is in the Domesday Book as a manor belonging to Uctred. The name Maghull may have been derived from the Celtic word magos, the old Irish Magh and the Old English halh, meaning ‘flat land in a bend of the river’. In 1774 the canal reached Maghull and stimulated new industry in the area, notably sandstone quarrying. In 1939 the IRA blew up the swing bridge at Green Lane on the canal. The strategic significance of this has never been fully explained! 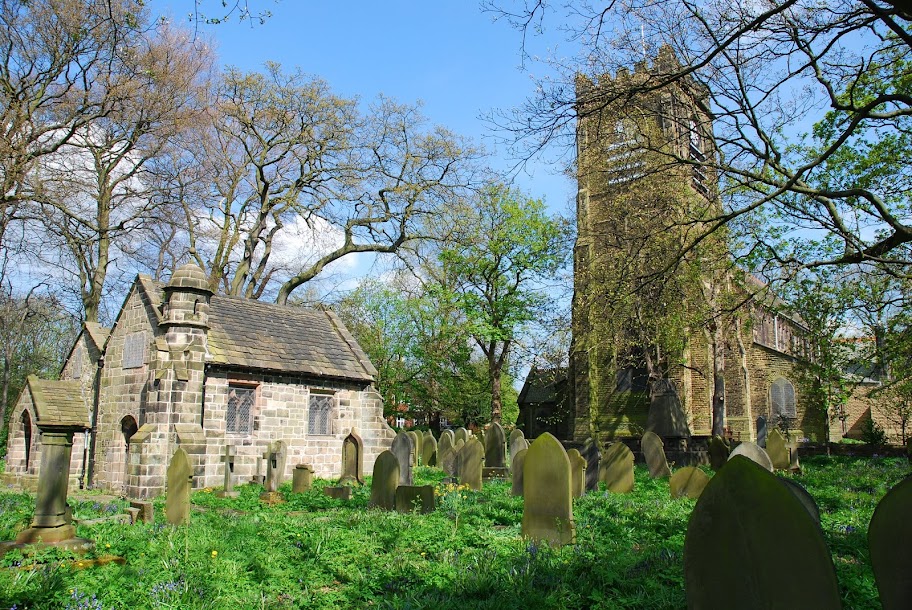 Just north of bridge 12A is St. Andrew’s Church and in the grounds is the remarkably small Ancient Chapel of Maghull, built at the beginning of the 13th century. The earliest known record of the Chapel is dated 1367 when Thomas de Maghull stated that ‘He dare not go to Church or visit anyone in the town without protection’ this followed an attack on him, with bow and arrow, by John the Mercer and others.  The Chapel is the oldest ecclesiastical building on Merseyside. 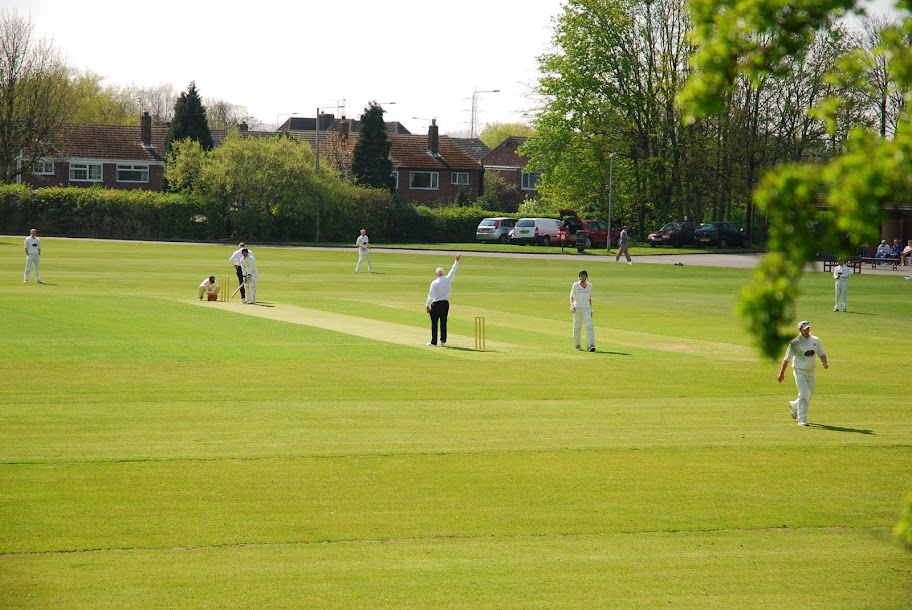 By now it was midday and a cricket match was just starting as I passed. As a passing woman remarked – a sure sign that summer is on the way! Another sign of the season was the Mayflower (hawthorn) in full bloom by the canal bank. 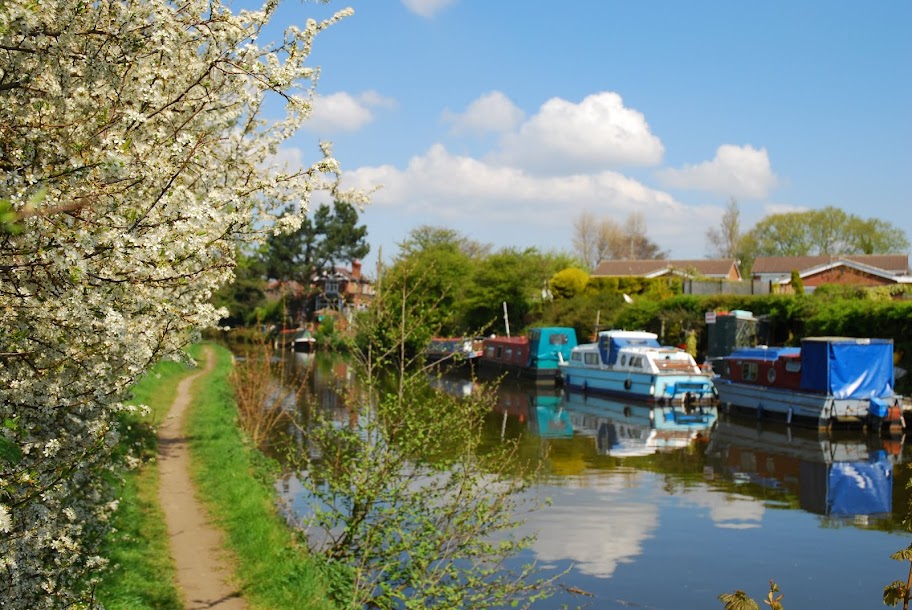 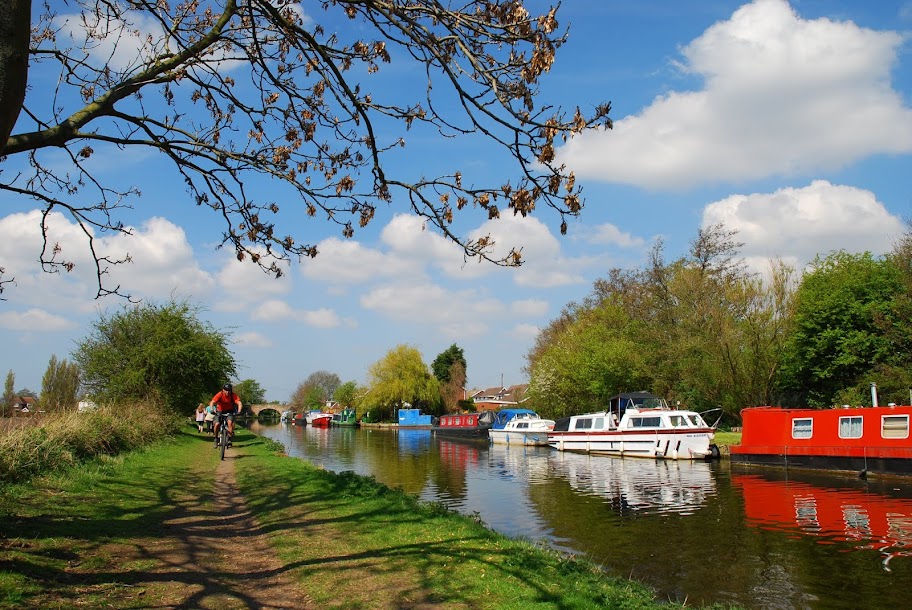 Stopped for lunch at the Hare and Hounds near bridge 14 – quite decent veggie burger and nice pint of Bombardier sitting outside in the sunshine. Then on past Lydiate and into the open, flat countryside towards Downholland. Settlement in Lydiate dates back to at least the middle of the 10th century. One possible root of the unusual name is the Old English hlid-geat meaning ‘swing gate’, which would have an association with animal farming. Lydiate is mentioned in the Domesday Book, and is described as having a “wood a mile long”, and there is evidence of the existence of extensive forests at that time, particularly of oak and elm. 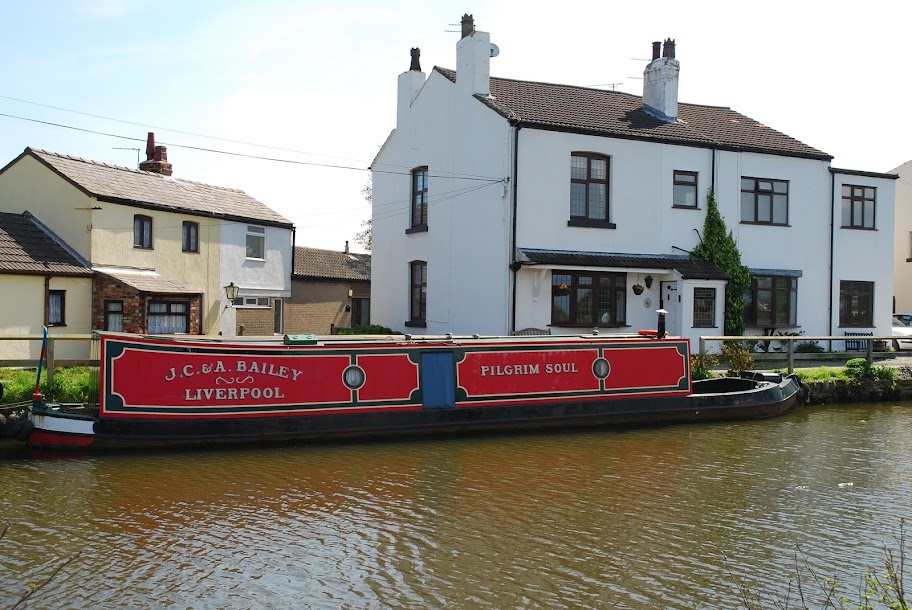 I’ve only just found out about The Scotch Piper Inn, 500 yards west of the canal, at bridge 19, on the A5147 Southport Road. It’s a thatched pub serving real ale, reputed to be the oldest inn in Lancashire (though now in Merseyside) and dates back to the 14th century. Originally the inn was built around an oak tree which can be seen in both the tap room and the front bar to the left of the fire place. The inn is now a Grade II listed building. I must call in next time! 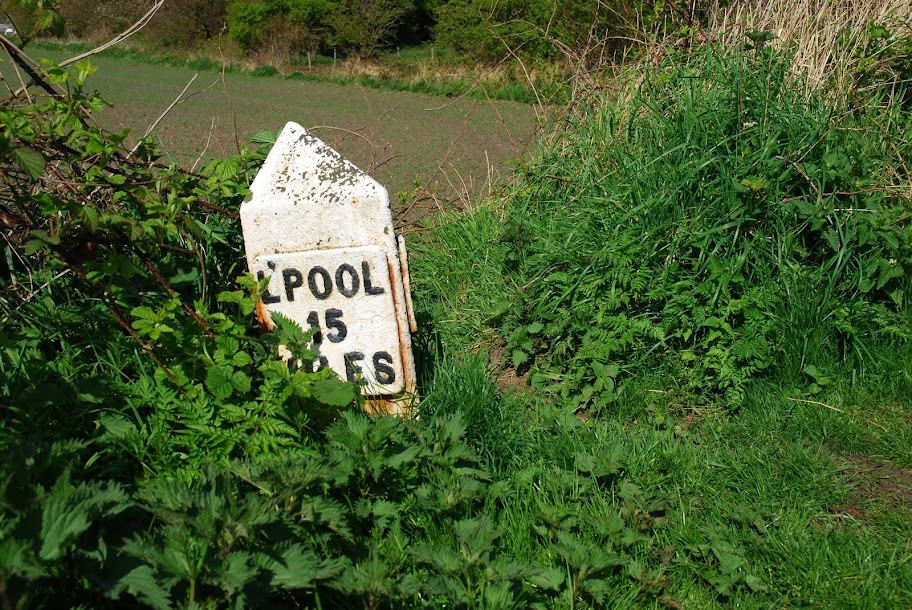 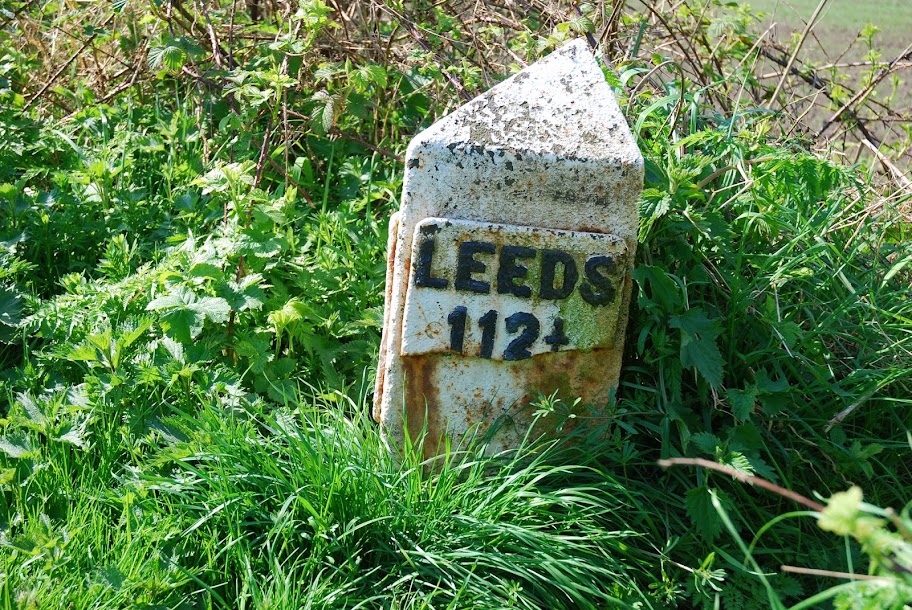 Now walking on towards Downholland which has a long and well-documented history: the lords of the manor of Holland – as the district was known in early times – are recorded from the days of Edward the Confessor. The manor remained in the de Holland family until 1534 when it was sold to Sir Henry Halsall of Halsall. Since then the combined estates of Downholland, Haskayne, Barton and Halsall passed first to the Gerard family and then to the Mordaunt family before eventually being sold to Thomas Eccleston, the lord of Scarisbrick, who died in 1809. 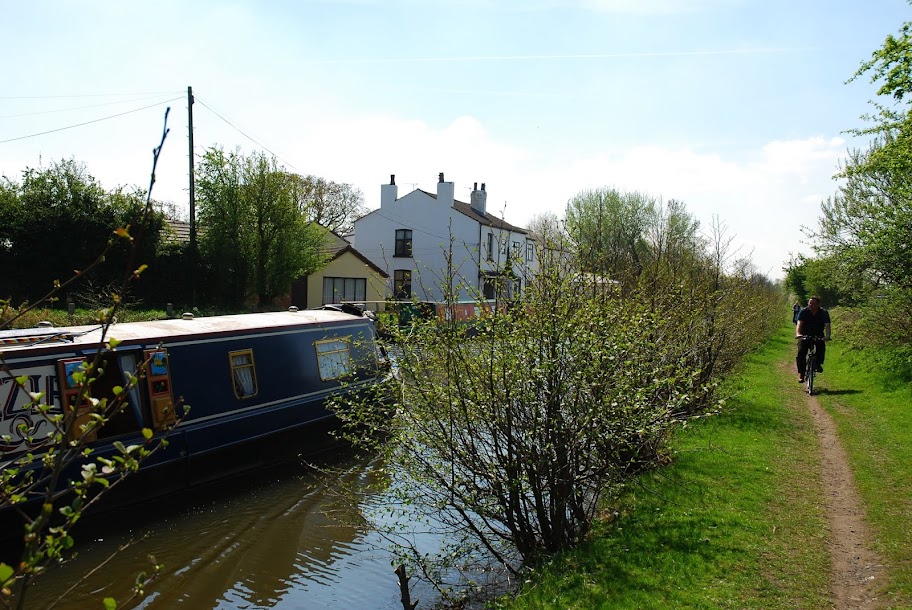 The construction of the canal in 1770 changed the lives of most of the villagers. Once the first sod had been cut in Halsall, scores of navvies came to the district, or were recruited from among the local people. They needed all kinds of provisions and the villagers benefited from the trade. However according to the records many canal-side villagers charged exorbitant prices for their goods and the canal authorities were forced to set up their own stores to supply the men. There was also a marked increase in the number of illegitimate births in the area at that time. 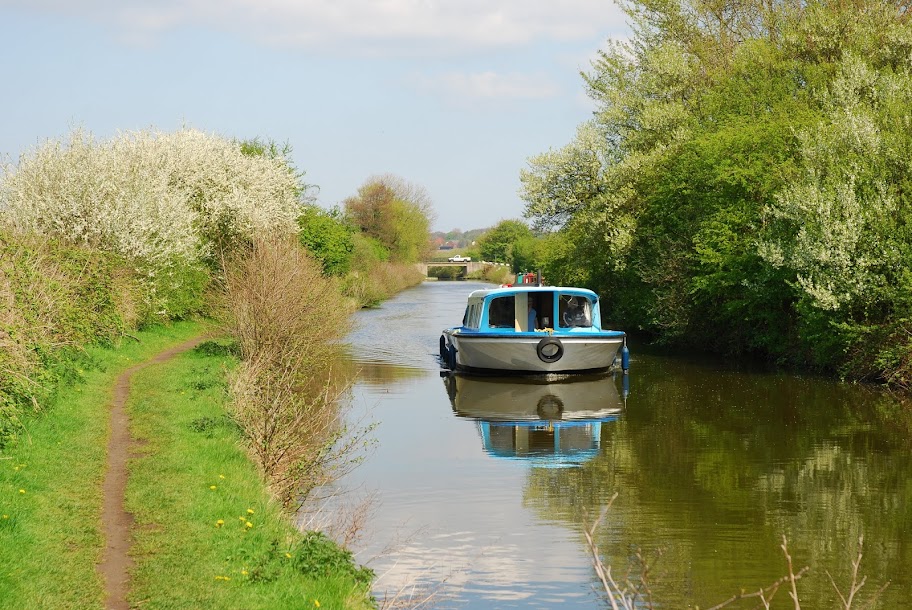 Initially the canal had been intended to facilitate the transport of coal from Wigan to Liverpool, but once it was completed it was used for every kind of cargo. Passenger barges brought visitors to the area and many holiday makers passed through the village on their way to Southport. In fact the canal opened up the countryside giving easy access to villages, like Haskayne, that had been virtually inaccessible during many days during the winter when the lanes were knee deep in mud and the moss lands were flooded. However it was probably the farmers who benefited most from the canal. They were able to send their produce to the markets in Wigan and Liverpool, and in return, manure from the town’s many horses and the night soil from the many houses were brought back to fertilise the fields. 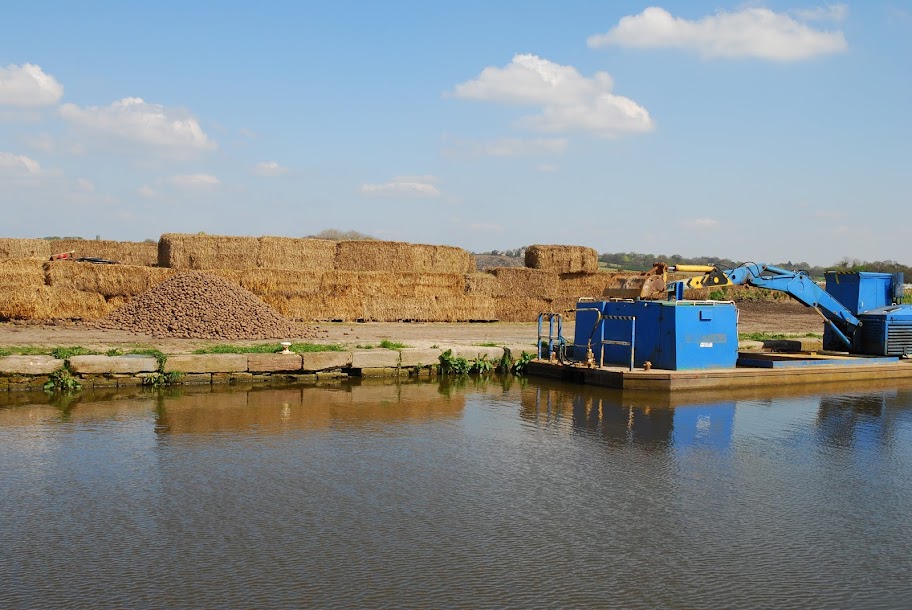 Signs that the canal is still used to transport agricultural produce – piles of potatoes at this wharf with some sort of loading mechanism (?) 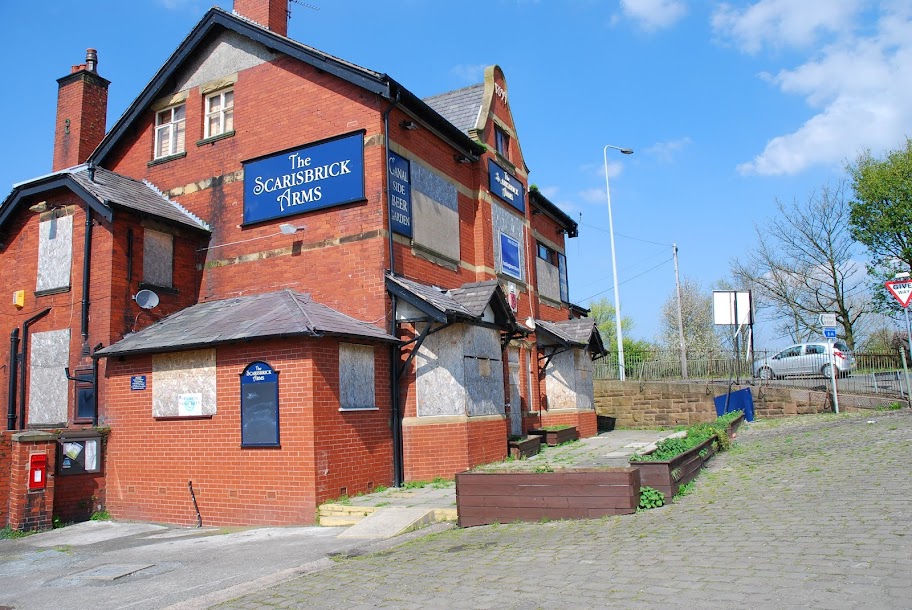 I finished this section at the now-derelict Scarisbrick Arms, where I caught the 300 back into Liverpool. It’s a mystery why a pub with such a desirable waterside location should close.

Next stage: Downholland to Halsall

One thought on “Walking the canal: Aintree to Downholland”