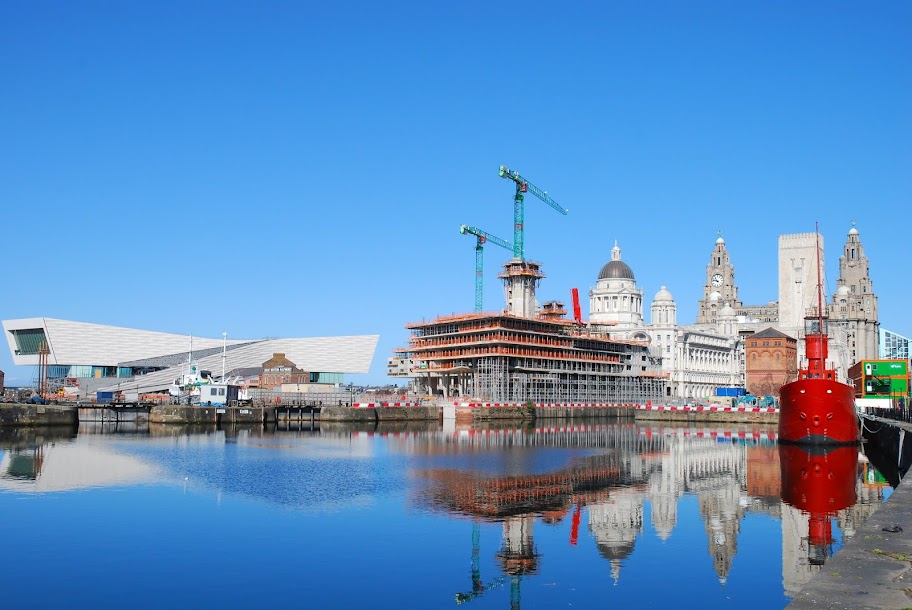 Easter Sunday morning, glorious cloudless sky.  Walking up for the paper a posse of squirrels were ransacking bin bags on Arundel. Whatever they’re eating, it can’t be as nutritious as nuts.

Yesterday, on another beautiful, warm, blue-sky day, I walked the first section of the Leeds-Liverpool canal: from the sublime (Liverpool waterfront) to the desperate (Bootle). I started at Canning Dock, the new terminus for the canal. 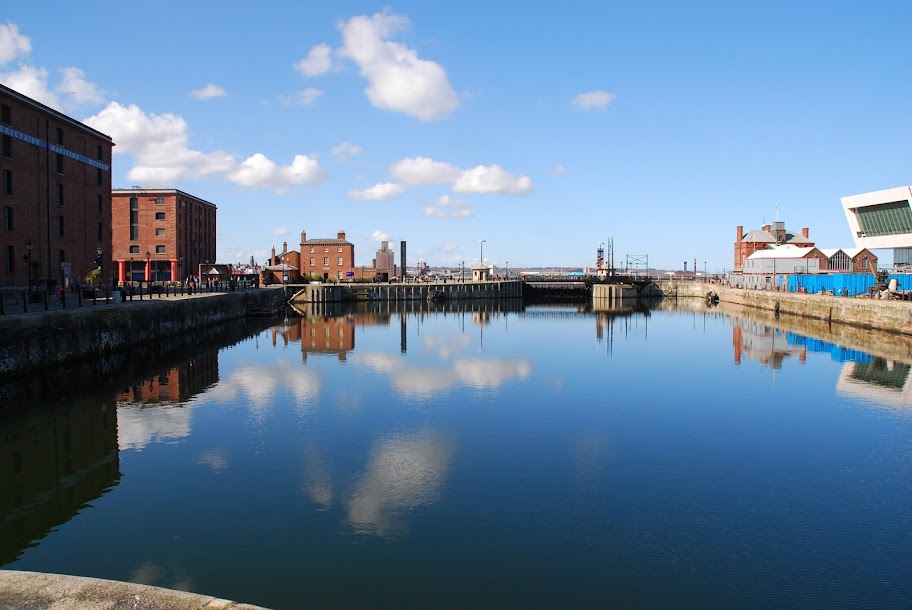 Mooring points have been placed ready for narrowboats traversing the canal link. 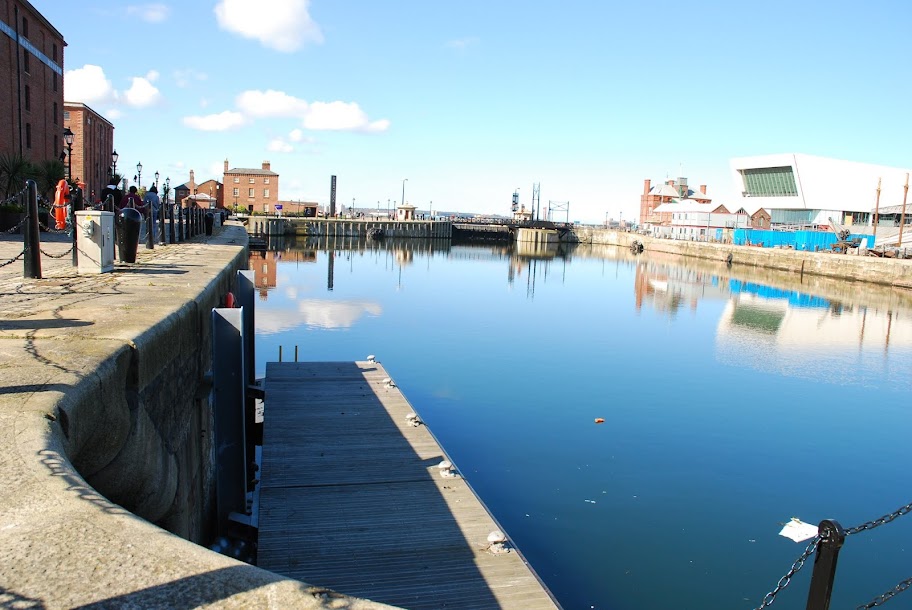 Canning dock was opened in 1737 as a protected tidal basin providing an entrance to the Old Dock. In 1832 it was officially named after the Liverpool MP, George Canning. To the east is the site of Old Dock, built in 1709, the world’s first enclosed dock, which now lies beneath the Liverpool One shopping development (part of the dock was excavated during the construction and a section can be viewed just outside John Lewis).

Access to the northern half of the dock system was via Georges Dock, Georges Basin and into Princes Dock. In 1899, both Georges Basin and Georges Dock were filled in and the site is now the Pier Head. Along with the Albert Dock and others in the immediate vicinity, Canning Dock was abandoned as a commercial shipping facility in 1972 due to the rising cost of dredging and falling traffic. It was restored in the 1980s and provides access to the Canning Graving Docks, which are part of the Merseyside Maritime Museum. In 2007, work began on the £20 million extension of the Leeds and Liverpool Canal, providing a further 1.4 miles of navigable waterway. 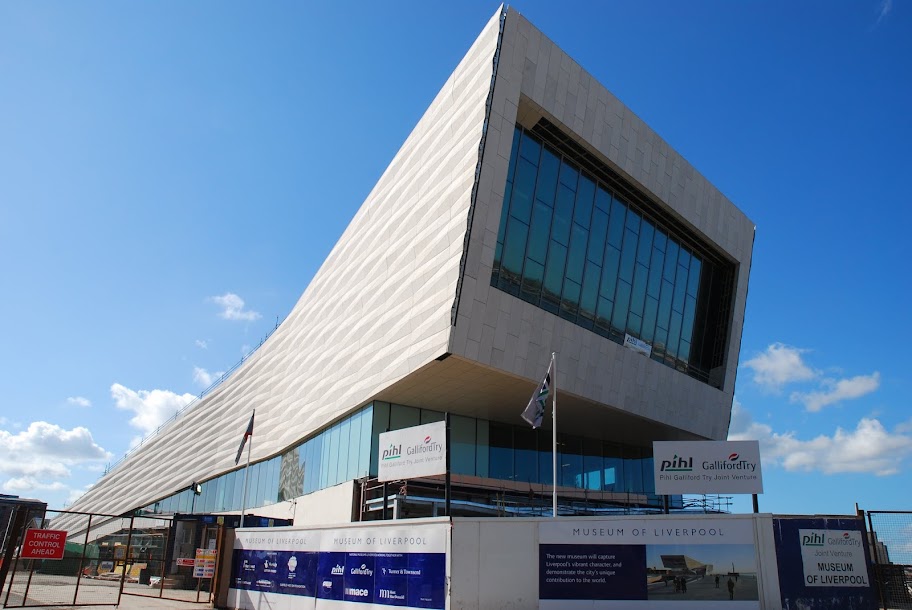 The new canal link passes two new buildings – the Museum of Liverpool, due to open in 2010 (above) and the Mersey Ferry terminal  (below). 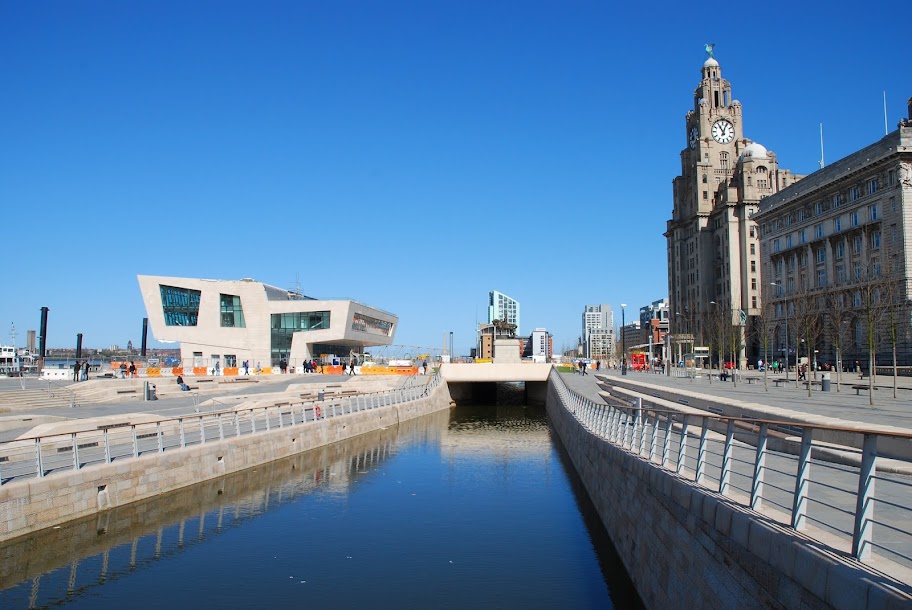 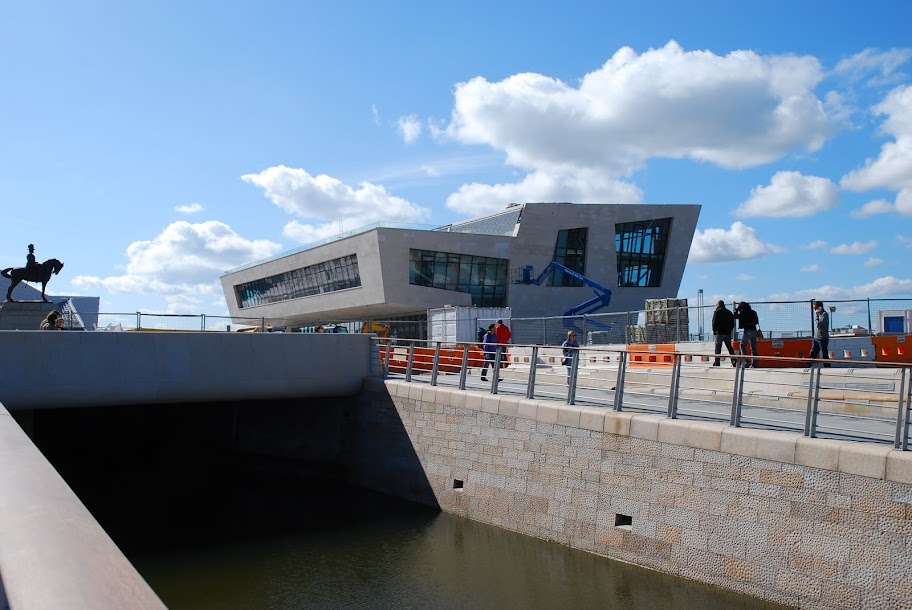 The works have been completed to a very high standard with high quality stone work, and at the northern end a superb new public plaza has been created: 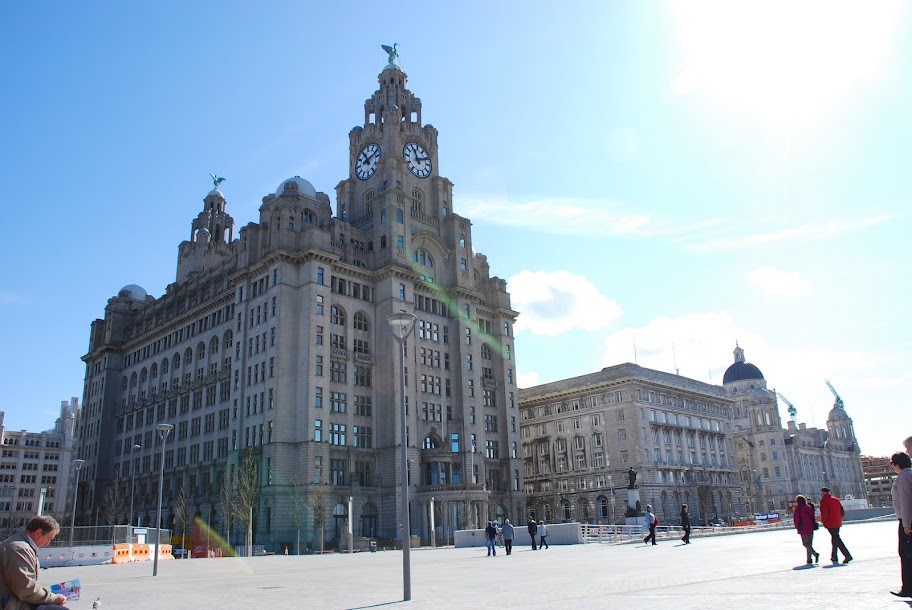 The canal link continues into Princes Dock, built by John Foster,and opened in 1821. It was once the base of the transatlantic liner trade and the Irish ferry service. In 1876 Georges and Princes landing stages were joined and extended, and the whole structure became known as Princes Landing Stage. At the time it was the longest floating structure in the world. It was used by the Cunard, White Star and Canadian Pacific Lines.

Today wharfage and warehouse space has been replaced by blocks of office accommodation,the Malmaison 128-room hotel which opened in 2007 and the Crowne Plaza hotel, as well as apartment blocks. 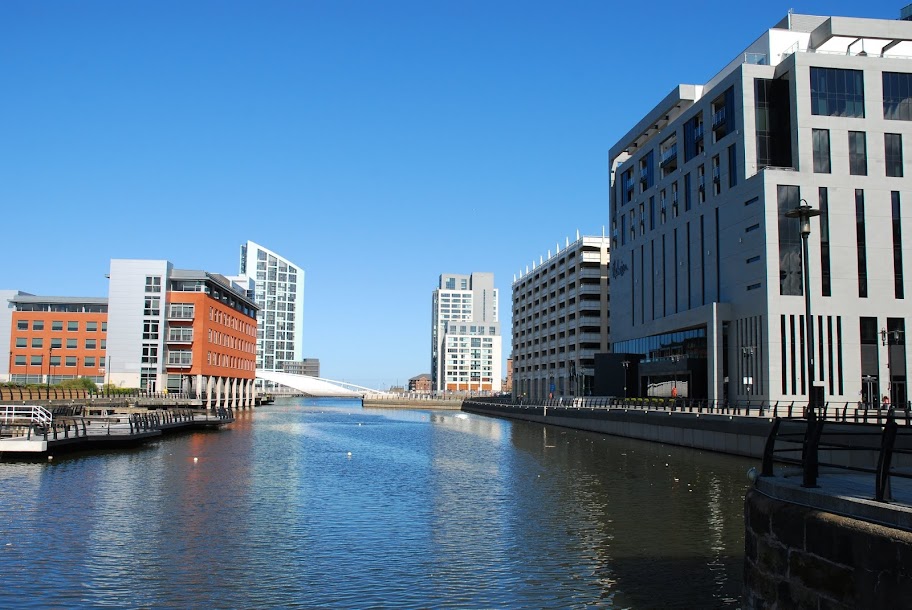 The dock is divided into two sections spanned by a pedestrian bridge designed by the Liverpool John Moores University Centre for Architectural Research and Consultancy Unit (CARCU).  Looking back towards Pier Head, the highest new addition to Liverpool’s waterfront skyline could be seen:  Beetham Tower. 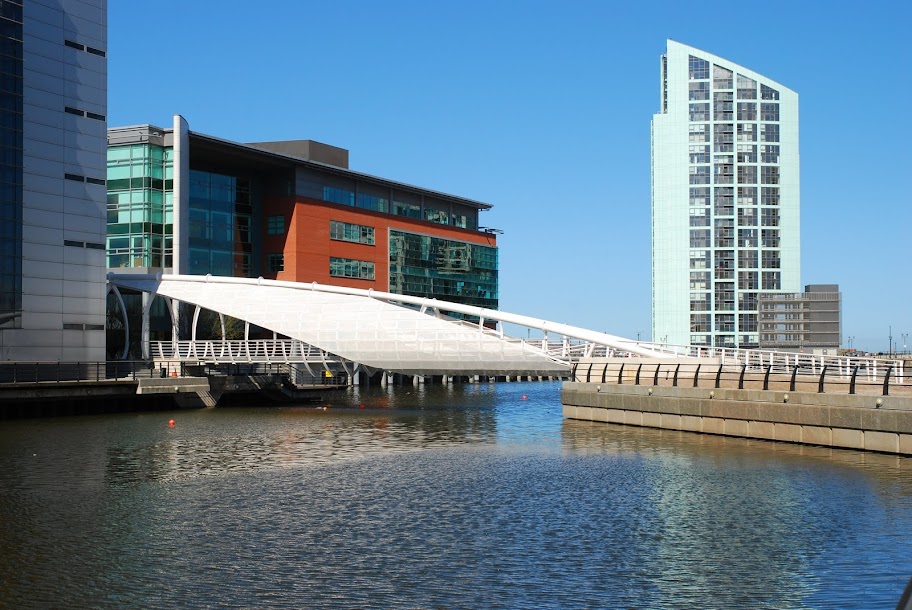 In 2007, a £19 million cruise liner terminal was opened at the dock. The terminal allows for cruise ships such as the QE2 to berth. 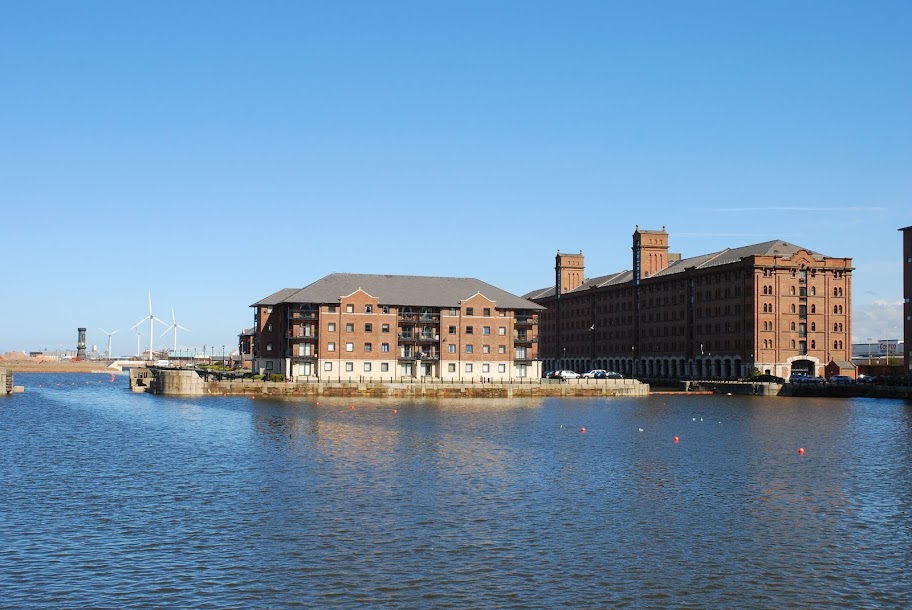 The canal link then progresses through Waterloo dock, once the embarkation point for emigrants to the New World, now the site of luxury apartments.

The scene in the Waterloo dock, at Liverpool, where all the American sailing packets are stationed, is at all times a very busy one; but, on the morning of the departure of a large ship, with a full complement of emigrants, it is peculiarly exciting and interesting. The passengers have undergone inspection, and many of them have taken up their quarters on board for twenty-four hours previously, as they are entitled to do by terms of the act of Parliament. Many of them bring, in addition to the boxes and trunks containing their worldly wealth, considerable quantities of provisions…
– Illustrated London news, July 6, 1850

At Salisbury Dock, opposite the Victoria clock tower, boats will turn right into Collingwood Dock to reach Stanley Dock and the locks up to the main line of the Leeds and Liverpool Canal (you can see the marker buoys in the photo above).

Victoria Clock Tower was designed by Jesse Hartley and was built between 1845 and 1848 as an aid to ships in the port, enabling them to set the correct time as they sailed out into the Irish Sea, while its bell warned of impending meteorological changes such as high tide and fog. It also served as a flat for the Pier Master. Today, though in a state of dereliction, the Tower is part of the Stanley Dock Conservation Area and also Liverpool’s World Heritage site. It is a grade II listed building. 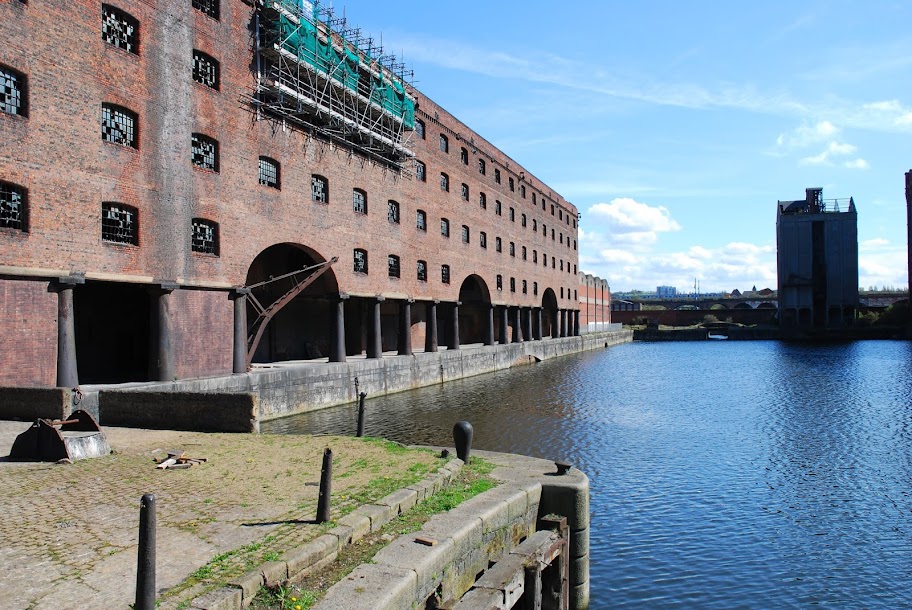 Stanley Dock was designed by Jesse Hartley and opened in 1848. The original warehouses are of a similar design to those at Albert Dock and are grade II listed buildings.

Stanley Dock Tobacco Warehouse is the world’s largest brick warehouse.In fact, in 1901, when it was constructed, it was claimed to be the world’s largest building in terms of area. The 14 storey building spans 36 acres.The warehouse was a late addition to the Stanley Dock complex and was built on land reclaimed from the dock. With the decline of trade going through Liverpool, the warehouse fell into disuse in the 1980s and gradually into disrepair. Part of the ground floor of the warehouse is used for the Sunday Heritage Market. There were redevelopment plans (see Stanley Dock transformed – Liverpool Echo) but will they survive the credit crunch?

Next to Stanley Dock is the bascule bridge whose structure spans Regents Road. It was built in the 1930s and is the only surviving example of a rolling bascule lifting bridge in Liverpool. It has been declared unsafe and is likely to be demolished and replaced.

From Stanley Dock  the canal proceeds through a series of locks to the Eldonian basin. 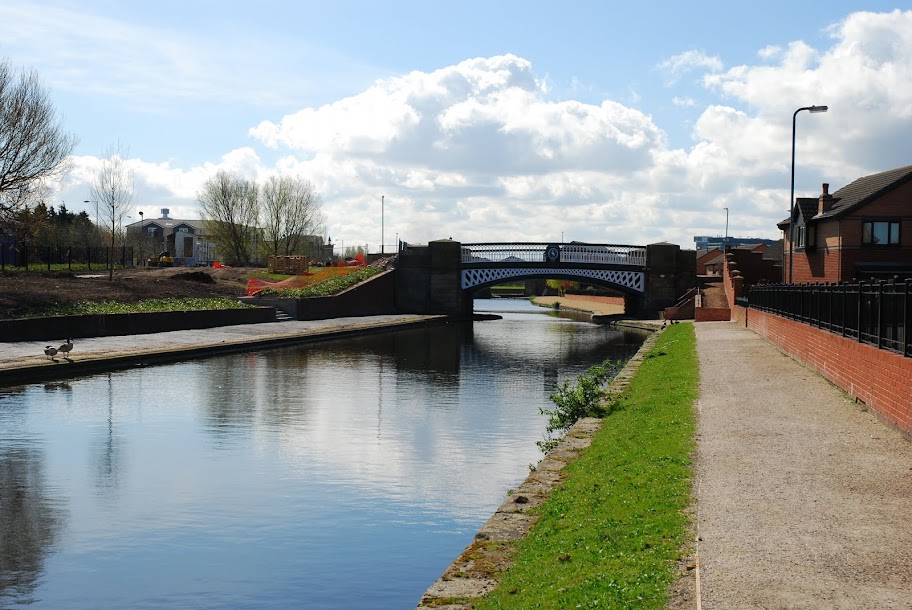 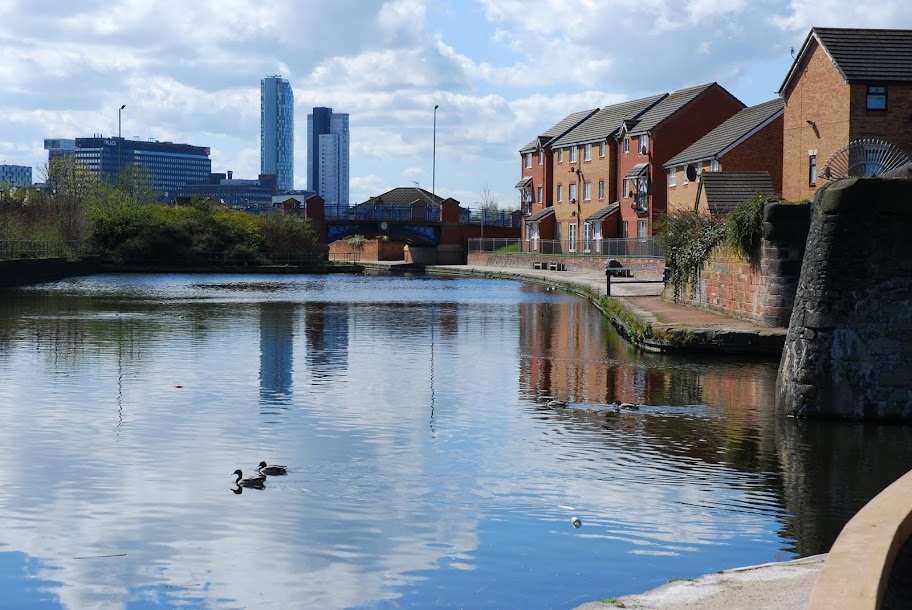 Here the canal corridor has been redeveloped as part of the Eldonian Village development. The inner-city neighbourhood in Vauxhall was facing demolition in 1977 in a slum clearance programme but the residents decided to remain together and formed a cooperative to build a new city centre neighbourhood.

The award-winning Eldonian Village is today a scene of ordered tranquillity, with billowing white curtains behind newly-painted balconies and huge silk roses much in evidence behind polished porch glass. Swans are nesting on the Leeds-Liverpool canal and the gym fills at lunchtime with office workers. “You’d never think you were in the middle of Liverpool,” is one frequently-heard comment – and one the Eldonians hate.

“This project is wonderful precisely because it’s in the middle of Liverpool, and this is what all inner-city housing should be like,” argues village housing director George Evans. “There are the docks, and the Liver Birds under a mile away, and we’re proud to be here.”
Guardian 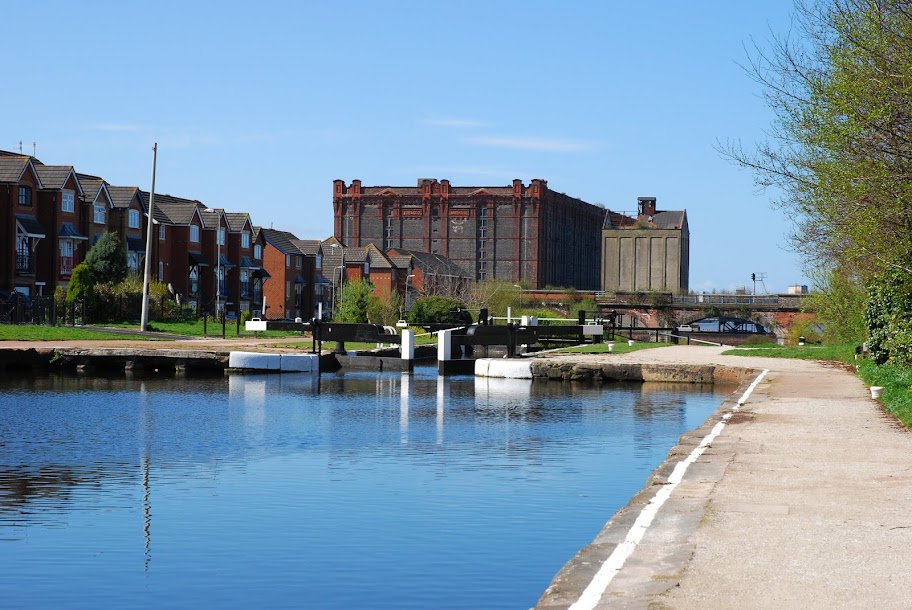 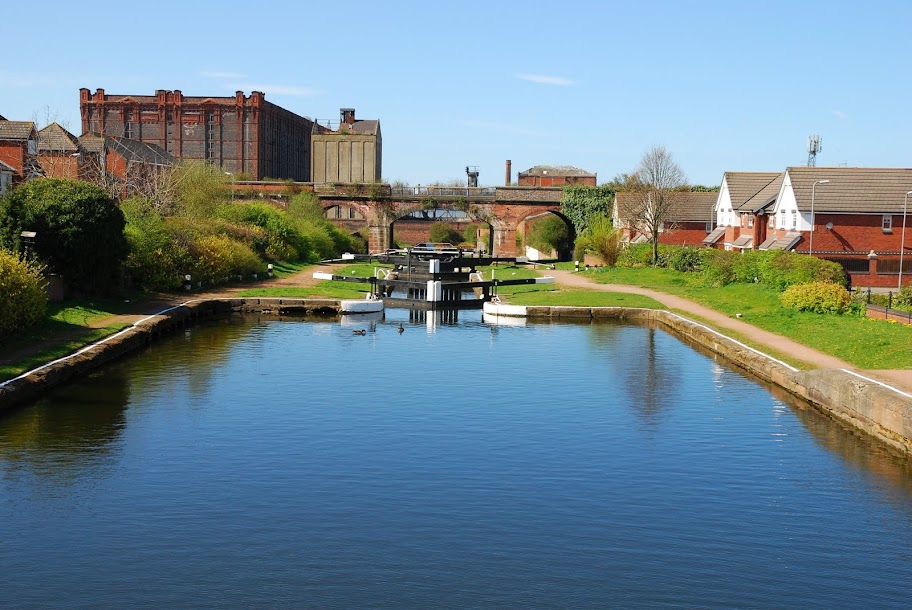 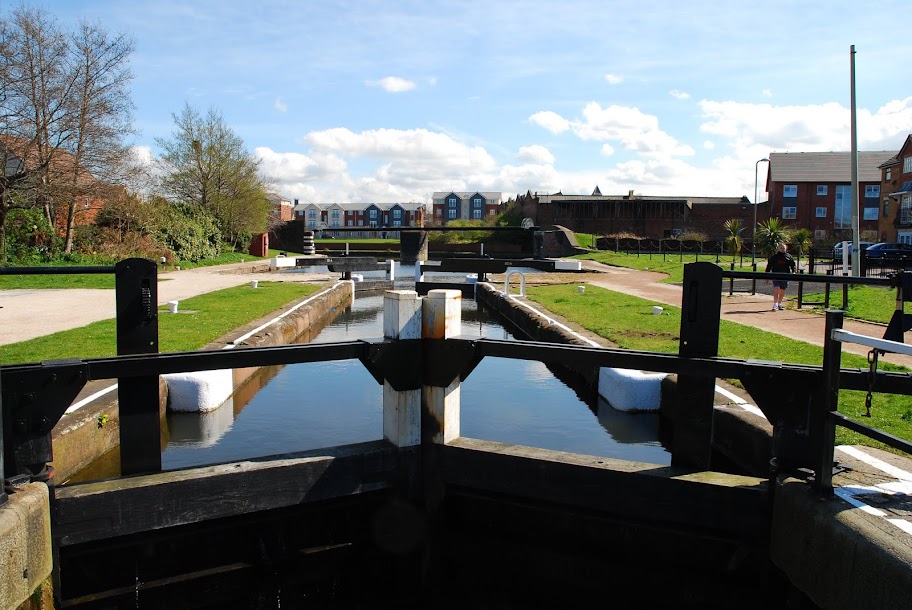 This is the Eldonian Basin; the canal once extended from here to terminate in the city centre at Pall mall and Leeds Street (hence the name)Along this stretch – from the Eldonian basin up through Sandhills and Kirkdale – there was remarkably little litter in the canal or along the towpath. 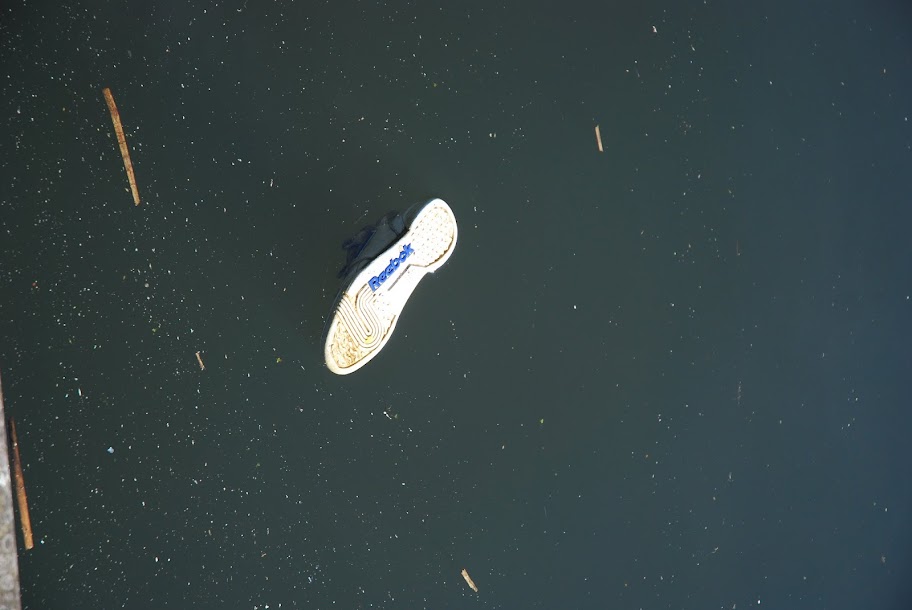 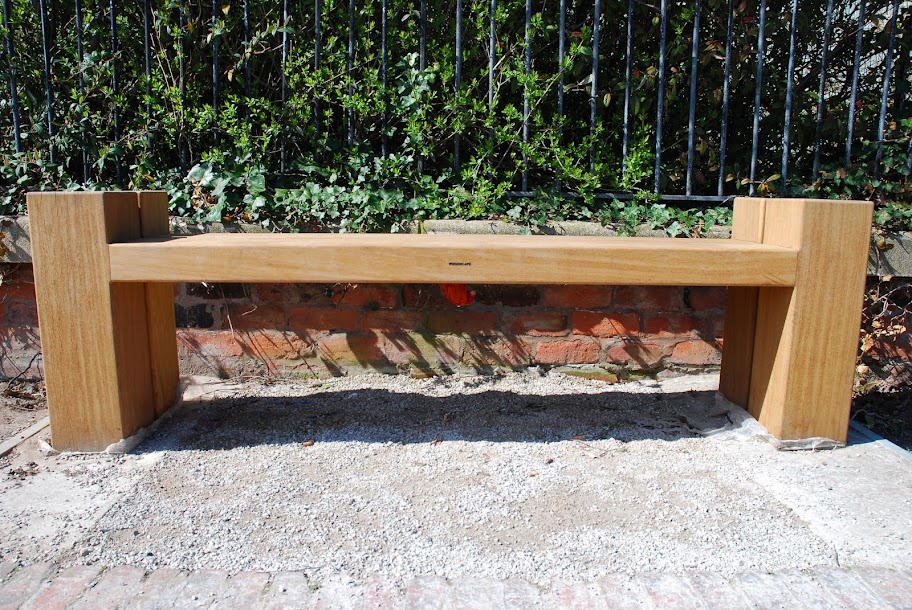 In fact, a lot of work has been done, refurbishing the towpath and adding features such as these rather beautiful sold wood seats. 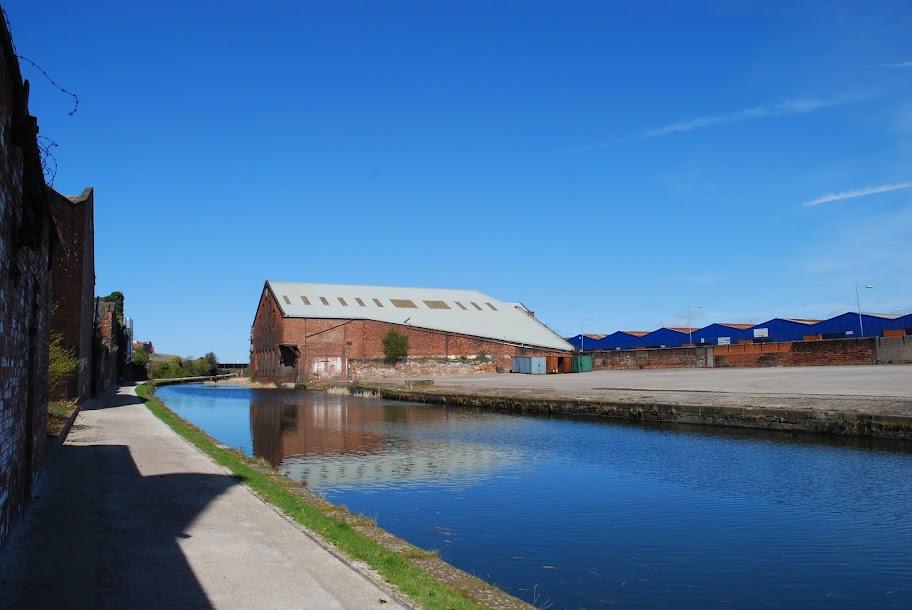 In the 19th century the ‘night soil men’ collected the town’s refuse, which included horse manure and human waste. This was removed by horse drawn cart and dumped on canal side manure wharves where it was sorted and loaded into specially adapted boats. Remains of manure wharves can still be seen on the bank of the canal near Sandhills Lane. 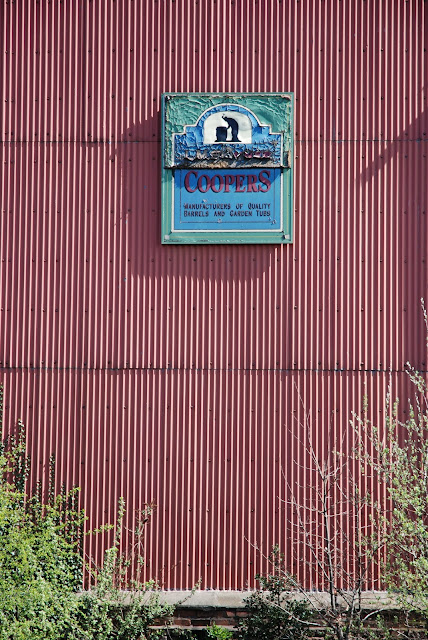 Walking the Kirkdale stretch there are reminders of the canal’s industrial age. The former Coopers warehouse  made casks for transporting goods: cooperage was once a thriving Liverpool industry, providing barrels for goods including tobacco, salt, gunpowder, cereals, fruit and alcohol, which were transported by ship or barge. 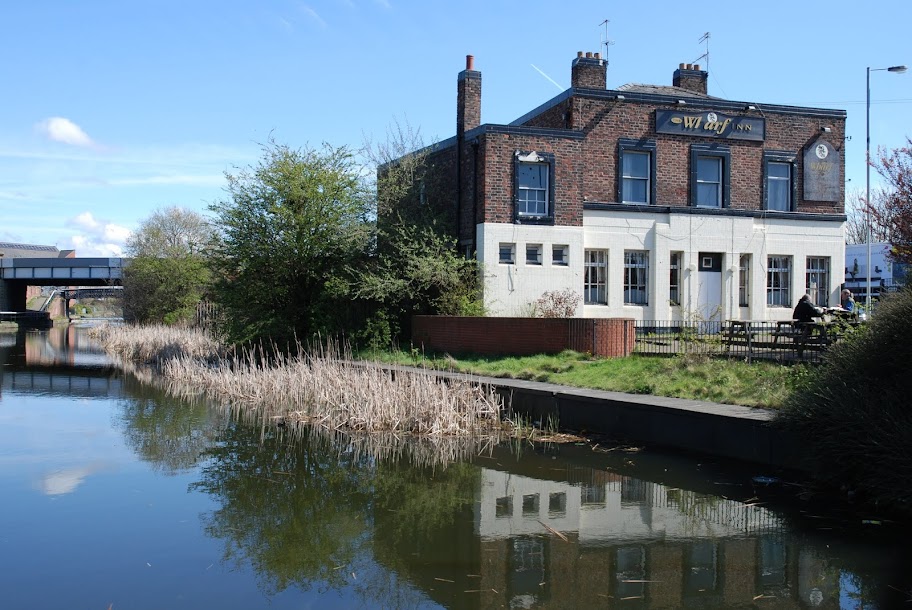 The approach to Bootle is pretty grim, with the area around Bootle Strand particularly depressing. The terrible Triad tower dominates the skyline and the Strand shopping centre which adjoins the canal by the Stanley Road bridge is best avoided. 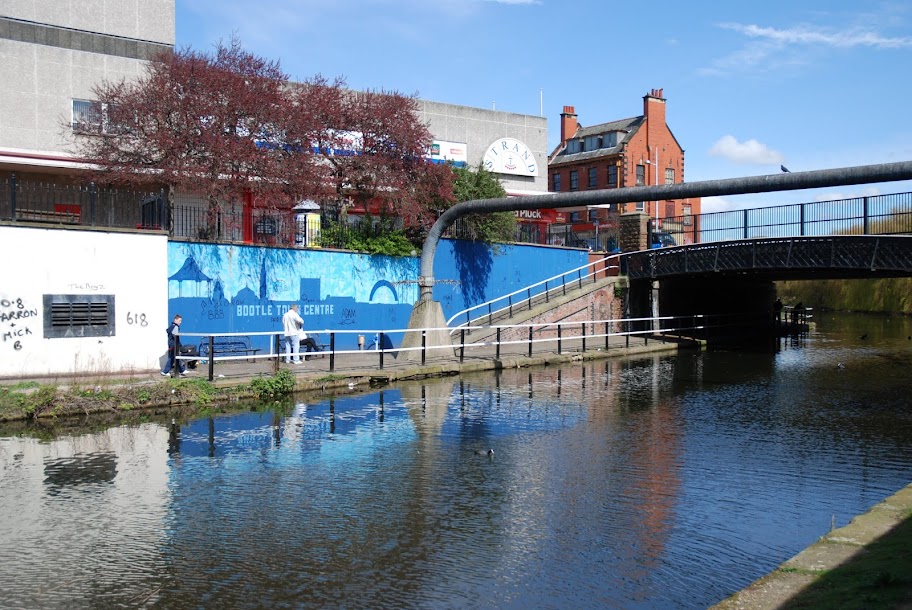 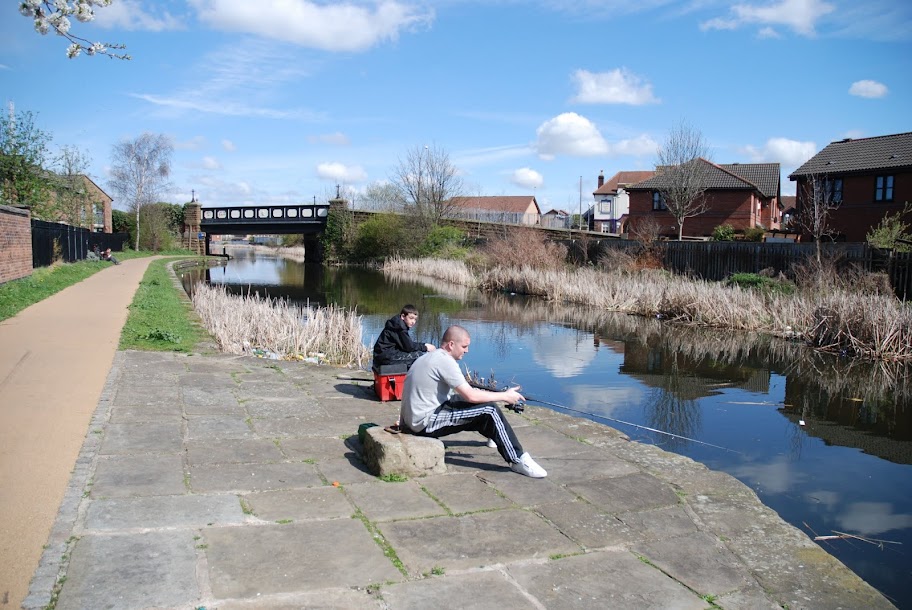 Amazingly, Bootle was once a bathing resort for wealthy residents of Liverpool.  Now there’s not much more to do than hope for a cattch in the canal. 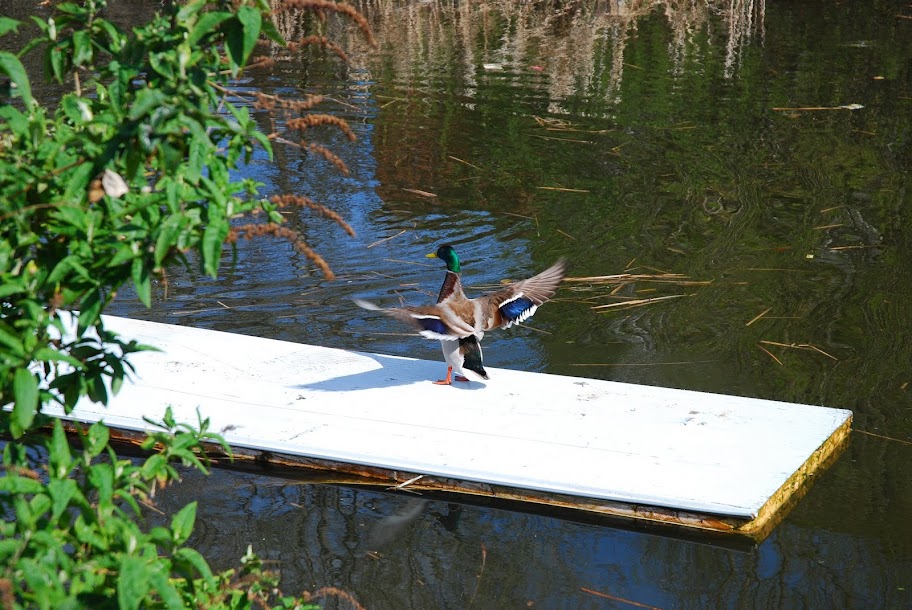 Next stage: Aintree to Downholland

6 thoughts on “Walking the canal: Liverpool to Bootle”