Two nights of Shakespeare this week, both presented by the all-male Shakespearean company Propeller,  directed by Edward Hall, who are performing A Midsummer Night’s Dream alongside The Merchant of Venice in a double bill at the Playhouse.

The best, by far, was Dream. It’s one of my favourite Shakespeare plays, and this production was hugely enjoyable, uproariously funny and properly magical.  It came closest to the Peter Brook version of my memory. The fun began the moment that Puck emerged from a little silver house, clad in tutu and striped stockings. While the whole company performed superbly, for me Puck and Helena stole the show. 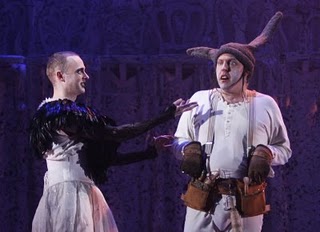 The simplicity and beauty of the set –  the previous night’s prison bars draped in white lace – reminded me of Peter Brook’s classic 1970 production; in a similar way it  allowed the action to take place on different levels, with ornate chairs creating a suspended level above the stage. I love this play in the same way I love A Winter’s Tale – though one is ostensibly set in Athens and the other in Bohemia, they are of course both located in the quintessentially English forest of Arden. This production emphasised the English  pastoral in the text and themes.

Propeller delivered a breathtaking performance – magical, romantic and comic and performed by an entirely male cast as, of course, it would have been in Shakespeare’s day. Along with the rest of the audience, I laughed till tears streamed, especially in the scene in the forest between Helena, Lysander, Demetrius and Hermia (which I don’t recollect being so funny – here it was largely due to the powerful performance by the actor playing Helena) and the Mechanics’ Pyramus and Thisbe play ( a great Bottom in particular!).

The Merchant of Venice

Propeller set the story in a giant prison, a society that traps and controls its people within a world torn by religious tensions and greed.

Which is the merchant here, and which the Jew?

The production took  this line of Portia’s from Act 4 scene 1, and modified it to ‘Which is the Christian here, and which the Jew?’ to point up the issues of religion and usury, using the line to introduce and close the performance.

Hath not a Jew eyes? Hath not a Jew hands, organs, dimensions, senses, affections, passions; fed with the same food, hurt with the same weapons, subject to the same diseases, heal’d by the same means, warm’d and cool’d by the same winter and summer as a Christian is? If you prick us, do we not bleed? If you tickle us, do we not laugh? If you poison us, do we not die? And if you wrong us, shall we not revenge? If we are like you in the rest, we will resemble you in that. If a Jew wrong a Christian, what is his humility? Revenge. If a Christian wrong a Jew, what should his sufferance be by Christian example? Why, revenge. The villainy you teach me, I will execute, and it shall go hard but I will better the instruction.
-Act III, scene I

Propeller was formed over 10 years ago by Edward Hall. It is celebrated for the clarity of its spoken language, illuminating Shakespeare’s meaning. Edward Hall and his company have won numerous awards and nominations on both sides of the Atlantic