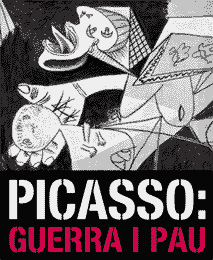 This was a superb exhibition at the Picasso Museum in Barcelona. It was especially moving to see the Vallauris Chapel War and Peace panels recreated (Sarah & I saw these in situ several years ago), as well as the large Massacre In Korea painting.

From the exhibition summary:

‘…painting is not done to decorate apartments. It’s an instrument of War for attack and defense against the enemy.’ Pablo Picasso, Les Lettres françaises, 24/3/1943

The aim of the exhibition is to show those moments when the artist uses his work to echo his horror at the ravages of war. This horror was especially strong during the Spanish Civil War, when he was commissioned by the government of the Republic to paint Guernica for the Spanish Pavilion at the Paris International Exhibition in 1937. With all the works that revolve around it, it has become a symbol of human suffering.

However, from Guernica on, a new symbolism in human representation appears in his work, particularly in his characterization of Maria-Thérèse Walter and Dora Maar, protagonists in Picasso’s life and work during these years, and who assume opposing identities, very close to the artist’s attitudes towards war and peace.During the Second World War, between 1943 and 1944, Picasso painted a series of still lifes in which he uses skulls to exorcise the sadness and pessimism of the war years, marked by the deaths of friends and relatives and the emergence of a cruel, violent world in which the premises he knew and understood were crumbling.

In the fifty or so drawings he did for the sculpture L’homme au mouton, an embodiment of the Christian Good Shepherd, evocative of the Mediterranean tradition, the humanism of his thoughts on the power of art over terror refers us to the context of war, in which the lamb is the incarnation of the victim and the shepherd the champion of peace and tolerance.

Two years later, in the summer of 1946, after the war had ended, he moved in with Françoise Gilot in Antibes and started on a new series of still lifes in which emblematic Mediterranean animals and birds radiate a new happiness and peace, endowing these works with an element of magic. The photographer Michel Sima gave him an owl, symbol of Antibes and of the goddess Pallas Athene. He included it in a number of the still lifes, in which it appears perched on a chair. This was, then, one of the elements which, like Pallas Athene herself, united wisdom and the victory of peace over war.

He joined the French Communist Party in October 1944 as part of his fierce defence of freedom and peace, which is expressed in his work at the time and reached its height with his participation in the Peace Conferences in Wroclaw in 1948, in Paris in 1949 and in London in 1950. The doves in his drawings and lithographs became an emblem of world peace.

Apart from the works for the Peace Conferences, in 1945 he started on the large panels War and Peace, which were installed in 1954 in a chapel in Vallauris after extensive preparatory work’.